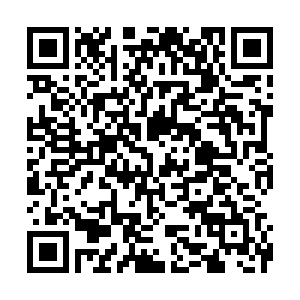 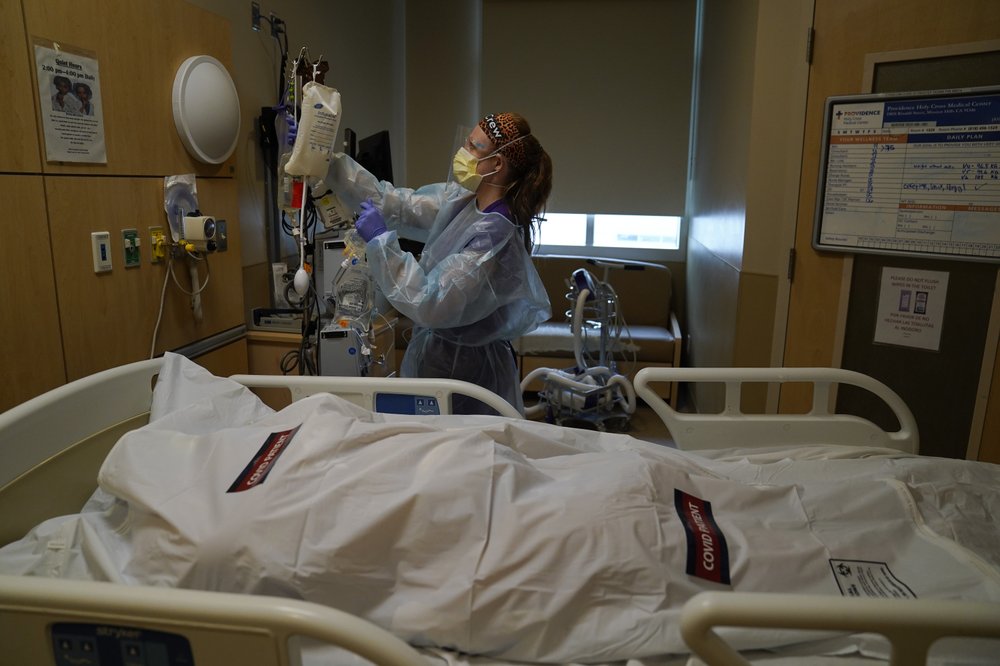 A nurse cleans up a room as a body of a COVID-19 victim lies in a body bag labeled with stickers at Providence Holy Cross Medical Center in the Mission Hills section of Los Angeles, California, U.S., January 9, 2021. /AP

A nurse cleans up a room as a body of a COVID-19 victim lies in a body bag labeled with stickers at Providence Holy Cross Medical Center in the Mission Hills section of Los Angeles, California, U.S., January 9, 2021. /AP

Johns Hopkins University reported on Tuesday that the death toll from coronavirus in the U.S. has eclipsed 400,000, which is greater than the population of New Orleans, Cleveland or Tampa, Florida.

After a year of denying reality and responsibility, President Donald Trump is leaving the White House with the loss of so many American lives that nearly equal the number of American lives lost annually to strokes, Alzheimer's disease, diabetes, flu and pneumonia combined.

"This is just one step on an ominous path of fatalities," said Dr. Irwin Redlener, director of the National Center for Disaster Preparedness at Columbia University and one of many public health experts who contend the Trump administration's handling of the crisis led to thousands of avoidable deaths.

"Everything about how it's been managed has been infused with incompetence and dishonesty, and we're paying a heavy price," he said.

"What's so troubling about this loss of life is it was preventable," Steven Woolf, director emeritus of the Center on Society and Health at Virginia Commonwealth University, told South China Morning Post. "This is an infectious disease we knew how to prevent, and as difficult as it is, far easier to solve than defeating Nazi Germany. And yet, we did not mount a response to wage war against this virus as we have in these other situations." 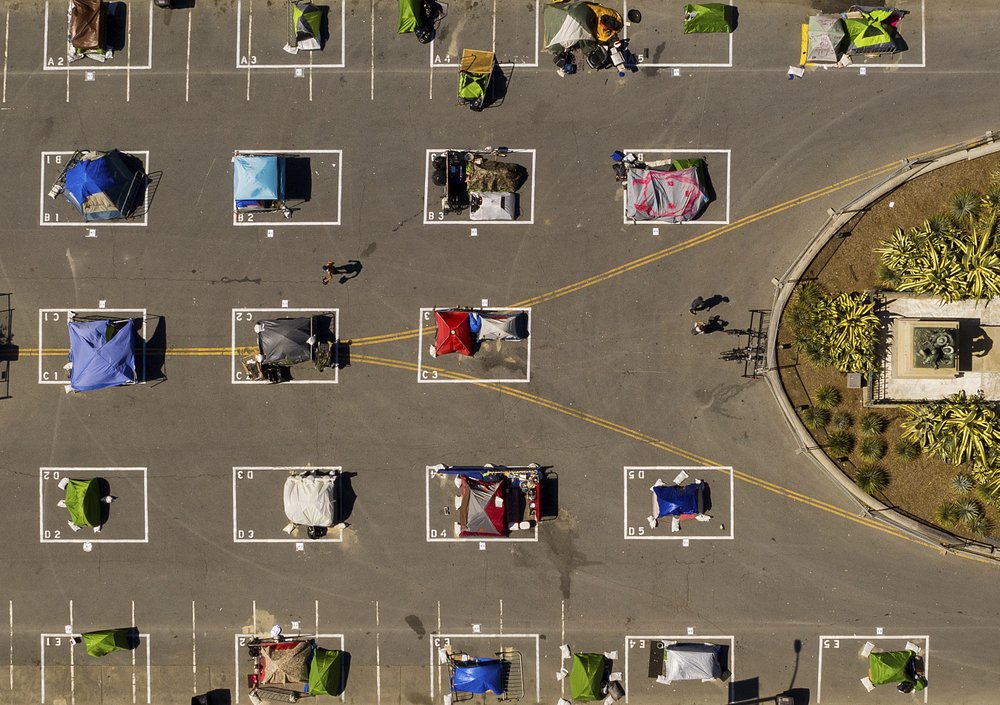 Rectangles designed over social distancing rules to prevent the spread of the coronavirus, are seen in a city-sanctioned homeless encampment at the Civic Center in San Francisco, the U.S., May 21, 2020. /AP

Rectangles designed over social distancing rules to prevent the spread of the coronavirus, are seen in a city-sanctioned homeless encampment at the Civic Center in San Francisco, the U.S., May 21, 2020. /AP

The U.S. accounts for nearly one of every five virus-related deaths reported worldwide, far more than any other country, despite its great wealth and medical resources.

"We need to follow the science and the 400,000th death is shameful," said Cliff Daniels, chief strategy officer for Methodist Hospital of Southern California, near Los Angeles. With its morgue full, the hospital has parked a refrigerated truck outside to hold the bodies of COVID-19 victims until funeral homes can retrieve them.

The coronavirus would almost certainly have posed a grave crisis for any president given its rapid spread and power to kill, experts on public health and government said.

But Trump seemed to invest as much in battling public perceptions as he did in fighting the virus itself, repeatedly downplaying the threat and rejecting scientific expertise while fanning conflicts ignited by the outbreak.

"We grieve every single life lost to this pandemic, and thanks to the president's leadership, Operation Warp Speed has led to the development of multiple safe and effective vaccines in record time, something many said would never happen," said White House spokesman Judd Deere.

With deaths spiraling in the New York City area last spring, Trump declared "war" on the virus. But he was slow to invoke the Defense Production Act to secure desperately needed medical equipment. Then he sought to avoid responsibility for shortfalls, saying that the federal government was "merely a backup" for governors and legislatures.

"I think it is the first time in history that a president has declared a war and we have experienced a true national crisis and then dumped responsibility for it on the states," said Drew Altman, president of the Kaiser Family Foundation, a health care policy think tank.

As governors came under pressure to reopen state economies, Trump pushed them to move faster, asserting falsely that the virus was fading. "LIBERATE MINNESOTA!" he tweeted in April as angry protesters gathered at the state Capitol to oppose the Democratic governor's stay-at-home restrictions. "LIBERATE MICHIGAN!"

In early October, when Trump himself contracted COVID-19, he ignored safety protocols, ordering up a motorcade so he could wave to supporters outside his hospital. Once released, he appeared on the White House balcony to take off his mask for the cameras, making light of health officials' pleas for people to cover their faces.

"We're rounding the corner," Trump said of the battle with the virus during a debate with Biden in late October. "It's going away."

But three months later, the loss of lives is accelerating.

More than 120,000 patients infected with the virus are in hospitals in the U.S., according to the COVID Tracking Project, twice the number who filled wards during previous peaks. On a single day last week, the U.S. recorded more than 4,400 deaths.

While vaccine research funded by the administration as part of Warp Speed has proved successful, the campaign trumpeted by the White House to rapidly distribute and administer millions of shots has fallen well short of the early goals officials set.

"Young people are dying, young people who have their whole lives ahead of them," said Mawata Kamara, a nurse at California's San Leandro Hospital who is furious over the surging COVID-19 cases that have overwhelmed health care workers. "We could have done so much more."

"Here you have a pandemic," said Eric Dezenhall, a Washington crisis management consultant, "yet you have a massive percent of the population that doesn't believe it exists."