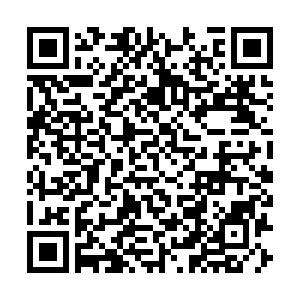 Editor's note: As "green development" is an important aspect of its 14th Five-Year Plan development blueprint, China has stepped up its environmental protection efforts. The Sanjiangyuan area in northwest China's Qinghai Province holds a unique role as a "water tower" with rich biodiversity. As the area has been turned into a national park, which shows China's determination in this regard, CGTN reporter Yang Jinghao travels there to record the changes seen there and the efforts behind.

Items made of Pulu, a special kind of woolen fabric with a history of more than 2,000 years, and Mani stones, a popular prayer amulet among Tibetans ... these are some of the popular products made in a small workshop in Golmud City, northwest China's Qinghai Province.

Sanmuji, 36, founded a cooperative specializing in traditional Tibetan handicrafts in 2015, some 10 years after migrating down from the Qinghai-Tibet Plateau.

"After moving here, I found our traditional culture was gradually disappearing. I just wanted to preserve what we had in the pastures and pass it on through this cooperative," Sanmuji told CGTN. She used to work as a teacher and a local government employee before starting the business.

Making a Mani stone at the cooperative. Yang Jinghao/CGTN

Making a Mani stone at the cooperative. Yang Jinghao/CGTN

Sanmuji and her family used to live in a small town close to the source of the Yangtze River, the longest in China, at an altitude of higher than 4,700 meters above sea level. In 2004, a total of 128 households were relocated, making way for the country's ecological protection campaign in the Sanjiangyuan area.

Sanjiangyuan means "source of the three rivers." It's where China's three great rivers originate – the Yangtze, Yellow and Lancang. Hailed as a "water tower," the region is also famous for its rich biodiversity. But due to climate change and excessive human activities like overgrazing, it suffered serious ecological degradation in the last decades of the 20th century.

Determined conservation efforts kicked off in the late 90s, with the so-called "ecological migration" being an important initiative. Though it is hard to bid farewell to their nomadic life, the herders are deeply impressed by the conveniences that accompany their new modern lifestyles. At least, they don't have to live in tents anymore.

"Take drinking water for example. In the past, we had to get water from nearby rivers. In winter, we could only get ice and wait for it to melt. Now, all we need to do is just turn on the tap," said Sanmuji. 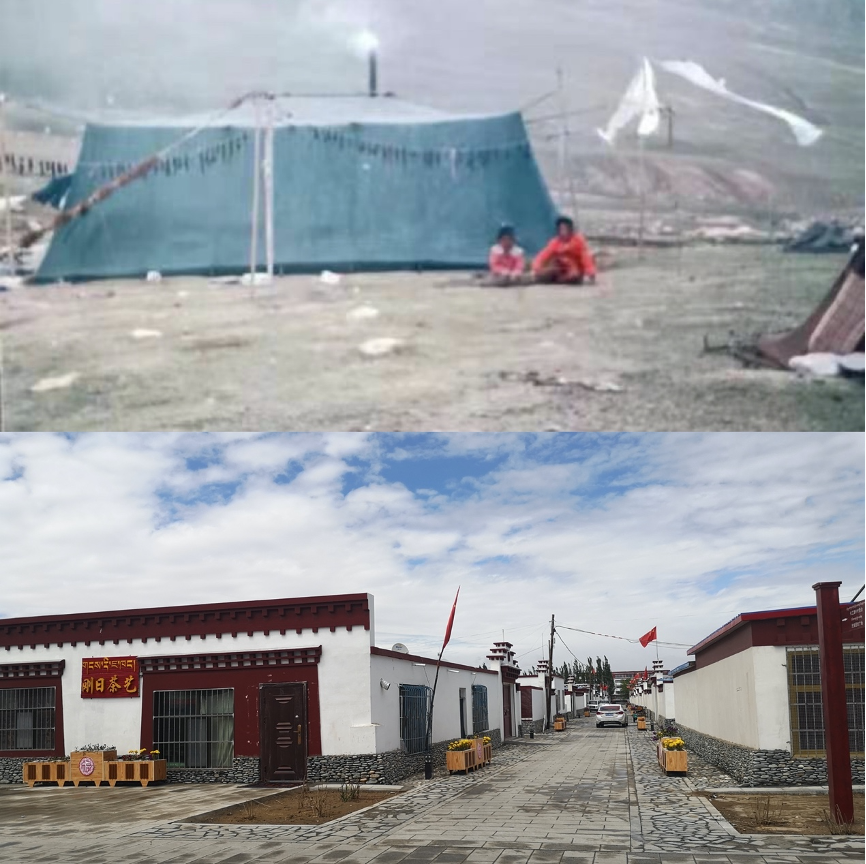 Comparison between the herders' living environment before and after the relocation. /Changjiangyuan Village Committee

Comparison between the herders' living environment before and after the relocation. /Changjiangyuan Village Committee

The new village named Changjiangyuan sits on the outskirts of Golmud, more than 400 kilometers from their homeland. Changjiangyuan is translated as "source of the Yangtze River." The name demonstrates the special location the villagers moved from.

On top of daily necessities, the public services they can enjoy have also much improved, in particular, education. Sanmuji's son attends a well-equipped school near home, where the students can receive bilingual education – both Putonghua, or Mandarin Chinese, and Tibetan.

"When I was a child, I had to travel a long distance to school. The classrooms were very shabby, and we only had several teachers," the woman entrepreneur recalled. 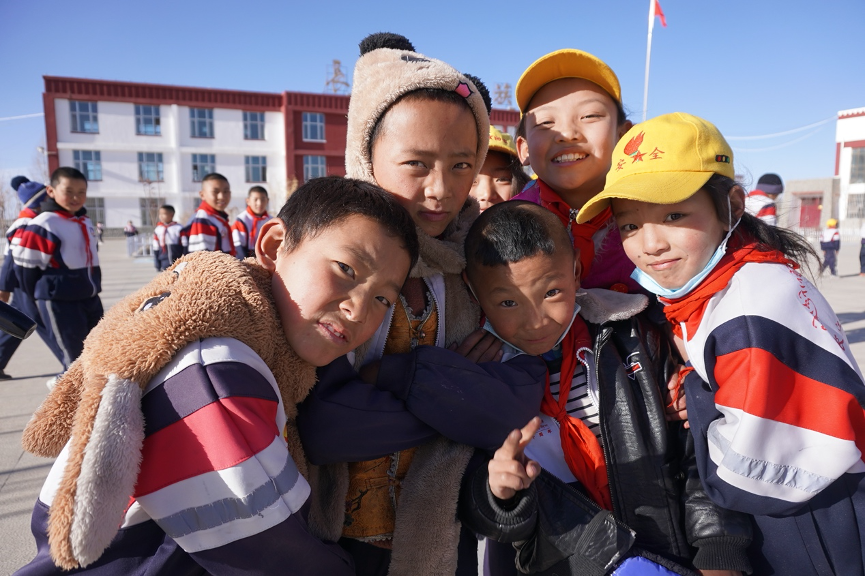 A group of students from the Changjiangyuan Minzu Elementary School pose for a photo. Luo Caiwen/CGTN

A group of students from the Changjiangyuan Minzu Elementary School pose for a photo. Luo Caiwen/CGTN

During the past two decades, tens of thousands of families have moved out of the ecologically vulnerable areas as conservation endeavors proceed. But it doesn't mean they have cut all ties with their hometowns. In fact, the bond is still strong.

Today, Sanmuji and her fellow villagers still work as "ecological protectors" and go back regularly, patrolling the mountains and cleaning trash from the pastures together with those still living on the plateau.

"We grew up on the pasture and would never forget there. It's a kind of responsibility to pay a regular visit back and do whatever we can to protect the land," Tsring Wangmo, another relocated herder who now works as the chief of the village, told CGTN. "Many grasslands had been consumed by yaks and sheep when we were about to move. Today, the pastures are recovering well, and we feel happy to see this."

The migration means the herdsmen can't make their living through herding anymore, but they are granted subsidies of different kinds by the government, which constitutes a stable source of income for them.

Meanwhile, various vocational training programs have helped them secure more job opportunities in nearby cities. Some, like Sanmuji, even choose to work on their own.

Sanmuji said each member of her cooperative can earn an average of about 2,500 yuan (about $386) a month. As the sales numbers continue to grow, she plans to expand the workshop, a move expected to benefit more locals.

She stressed that her greatest wish is that her hometown will become cleaner and more beautiful, thanks to efforts from each villager and anyone willing to lend a hand.

(Cover: Sanmuji and some members of the cooperative she initiated work together. Yang Jinghao/CGTN)