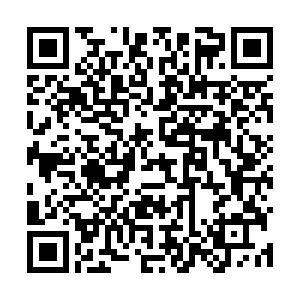 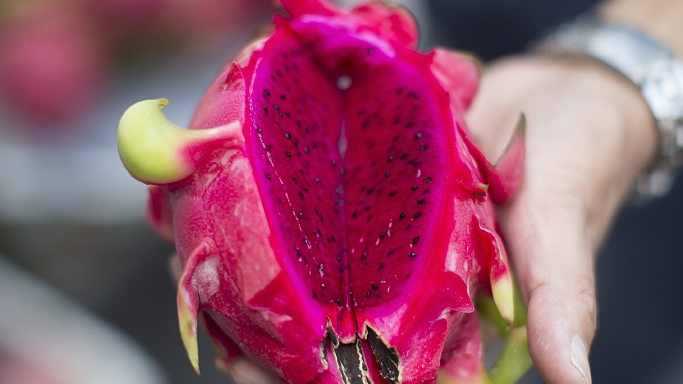 The flesh of the dragon fruit could be white or dark red. /CFP

The flesh of the dragon fruit could be white or dark red. /CFP

The home state of Indian Prime Minister Narendra Modi wants to change how dragon fruit is called in part because the original name is reminiscent of China.

The western state of Gujarat has opted to go instead with kamalam, the Sanskrit word for lotus flower, to refer to the tropical fruit.

Gujarat Chief Minister Vijay Rupani argued that the spikes on the fruit bear resemblance to a blooming lotus. The lotus is India's national flower and the election symbol of Modi's ruling Bharatiya Janata Party, to which Rupani also belongs.

"Though it is known as dragon fruit, it does not sound appropriate," Rupani said on Tuesday according to The Hindu newspaper.

"There is nothing political" about the change of nomenclature, he said, but admitted that "the name of dragon fruit is associated with China." 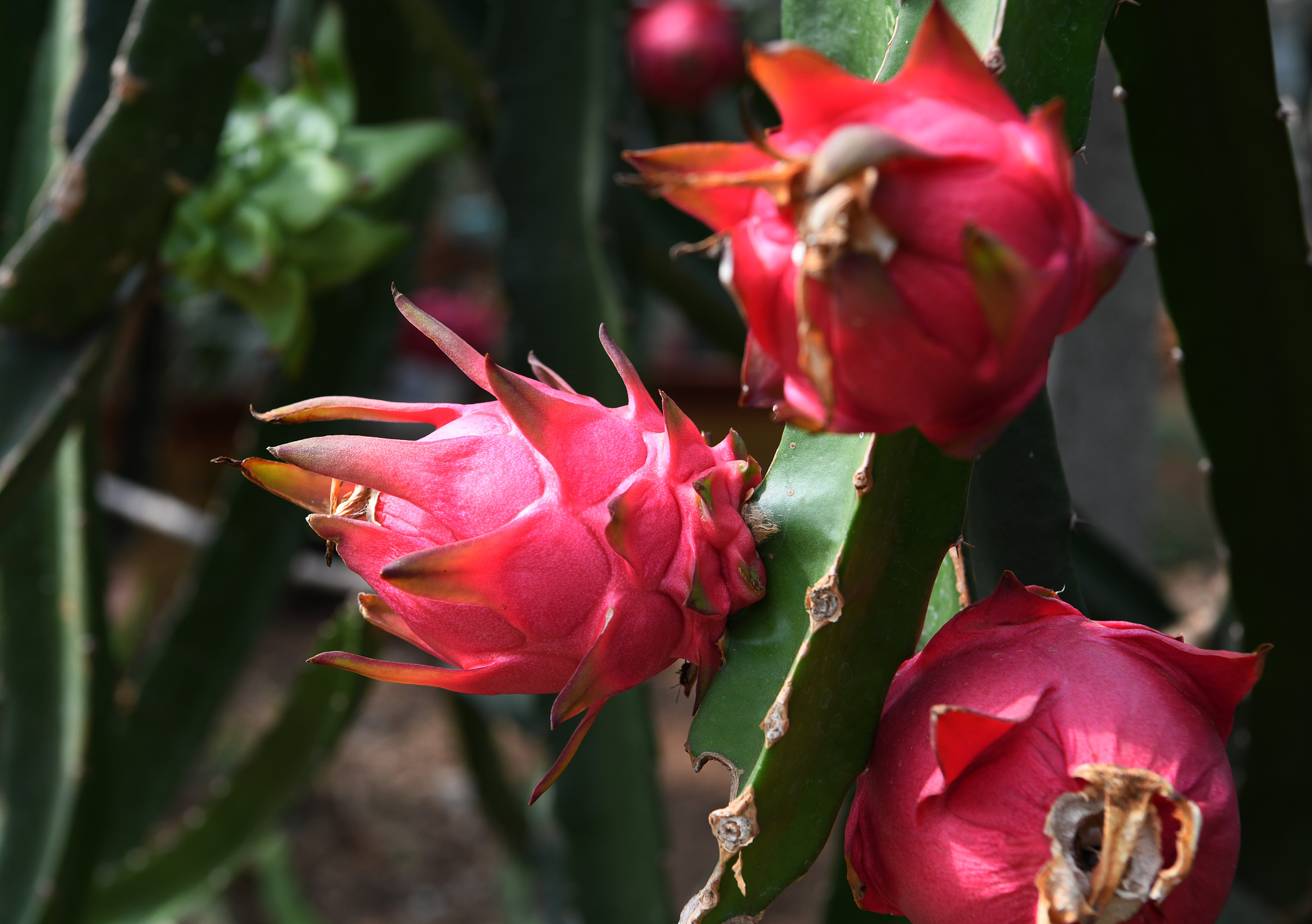 Gujarat authorities say the scaly spikes of the fruit make it look like a lotus in bloom. /CFP

Gujarat authorities say the scaly spikes of the fruit make it look like a lotus in bloom. /CFP

Ties between China and India have come under strain since June 2020 following a border crisis, with tensions escalating after New Delhi banned hundreds of Chinese apps, claiming they threaten its national security.

Rupani said that a proposal for the name change has been sent to relevant authorities.

Dragon fruit, which is a member of the cactus family, goes by different names in different parts of the world.

In its native Mexico, Central and South Americas, the fruit is known as pitaya or pitahaya. But the plant's resilience has made its cultivation possible in places further afield, from Israel to Thailand and Australia, with the fruit picking up different labels along the way.

It's nicknamed strawberry pear owing to its skin color, which ranges from vibrant pink to deep red, and oblong, almost pyriform, shape. But perhaps the exotic fruit is best known as dragon fruit, most likely because its scaly exterior evokes images of the mythical creature.

The term reportedly came into English use in 1963 and originated from its Vietnamese name thanh long, or dragon's eyes. 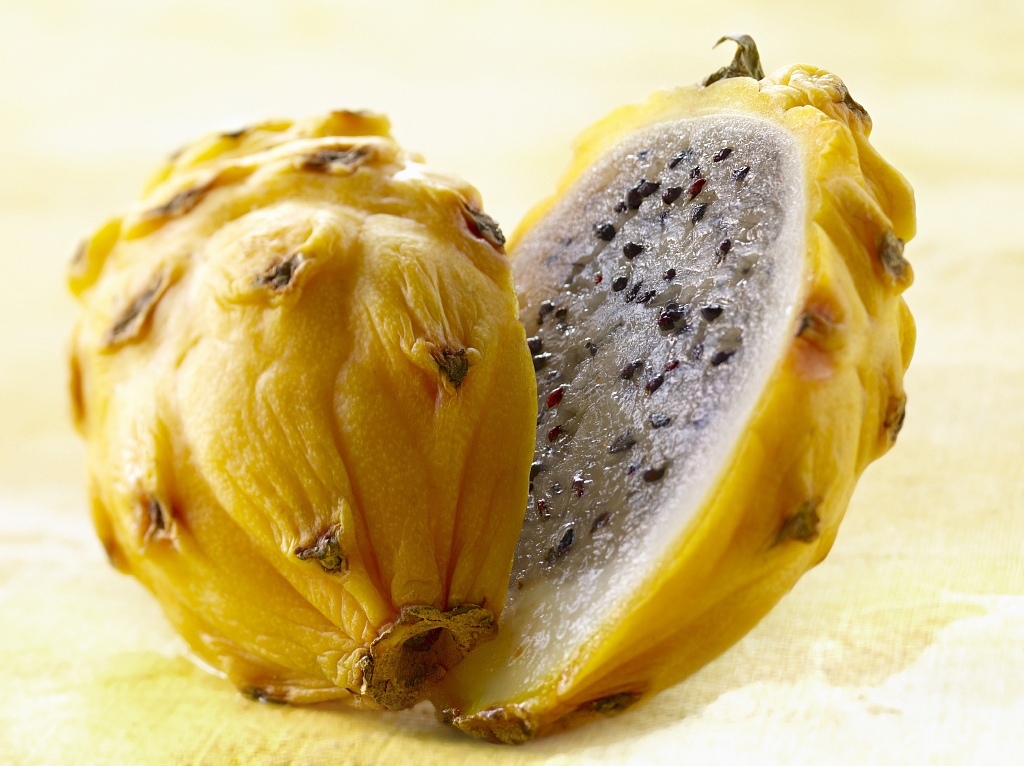 The leathery skin of this cactus fruit is reminiscent of dragon scales. /CFP

The leathery skin of this cactus fruit is reminiscent of dragon scales. /CFP

Vietnam is the world's No.1 supplier of the exotic fruit, which makes up 55 percent of its fruit export revenue. The country is so dependent on selling dragon fruit to overseas markets that international trade disruptions caused by COVID-19 pandemic early last year flooded the domestic market with the magenta-colored fruit, briefly pushing prices down by as much as 80 percent.

India, too, is a grower of the imported fruit, albeit on a small scale. Last July, during his radio program, Modi commended farmers in Kutch in Gujarat for growing dragon fruit despite the region's aridity, hailing it as "the very spirit of self-reliance," according to the Indian Express newspaper.

Kutch is home to more than 200 farmers cultivating over 1,500 acres of the fruit, Reuters has reported. Gujarat authorities said the farmers approached them with the idea of reimaging the fruit.

The rebranding move was mostly met with humor from Indian opposition and social media users, although some expressed that localizing the name of the fruit could boost its popularity. 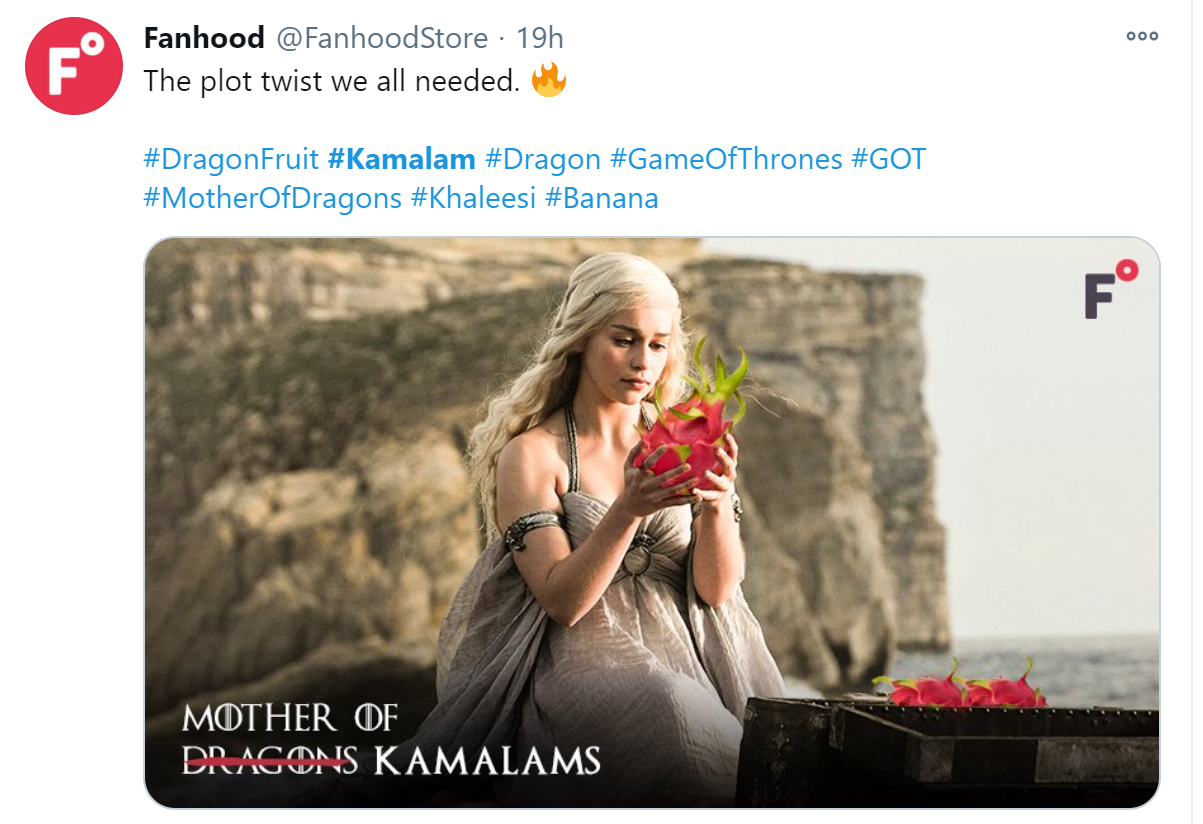 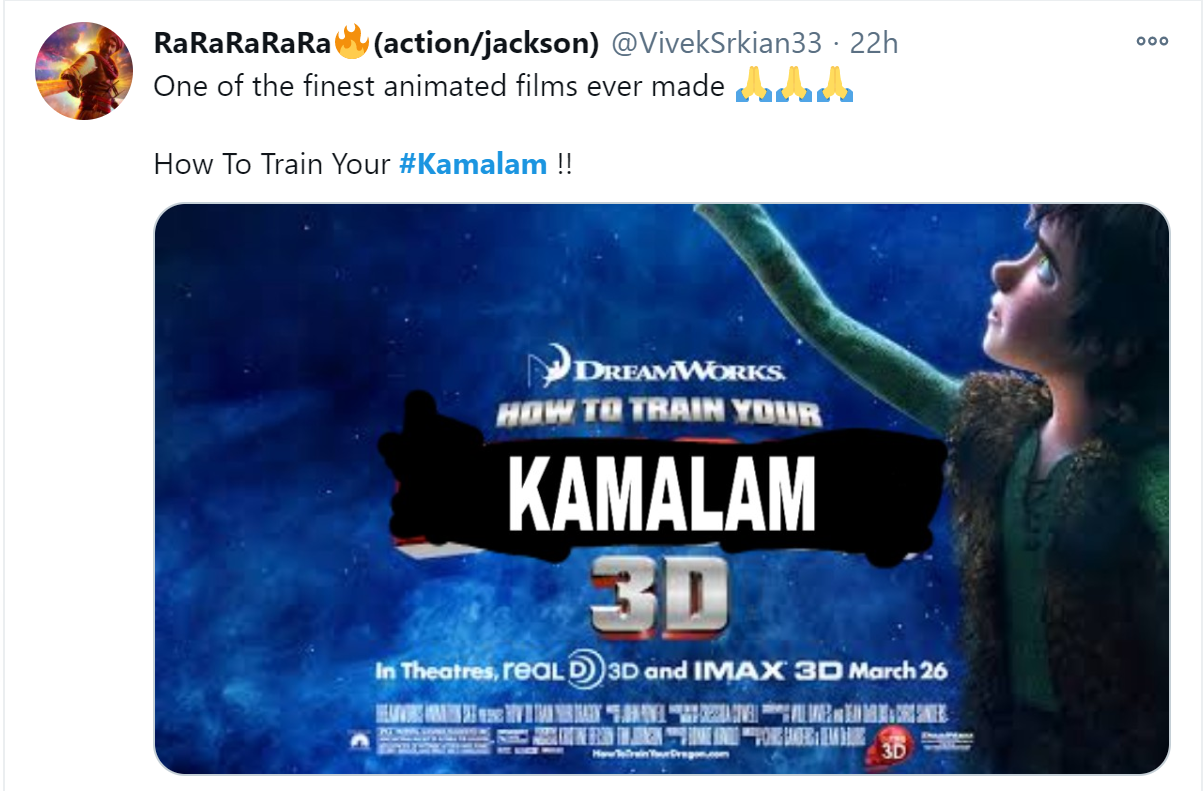 Memes from the DreamWorks Animation franchise were also not in short supply. /Twitter screenshot

Memes from the DreamWorks Animation franchise were also not in short supply. /Twitter screenshot 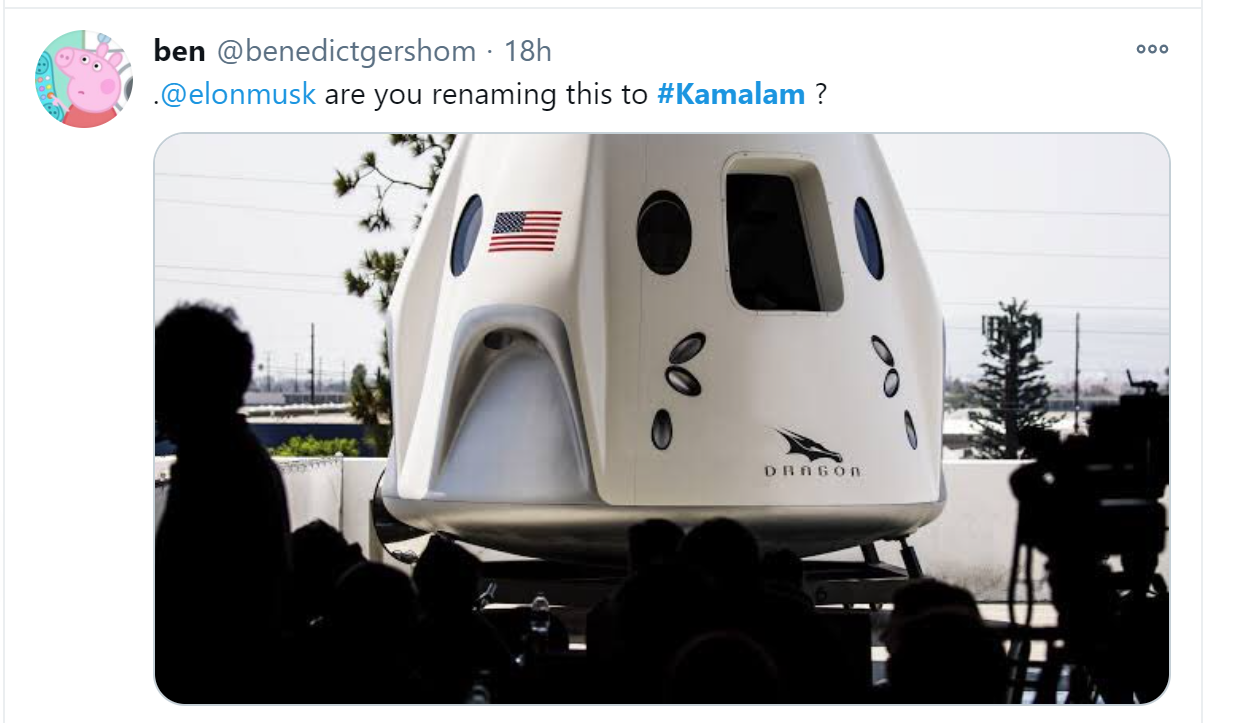 MP Karti Chidambaram, who is a member of India's main opposition Congress party, quipped in a tweet that "the dragon has been slayed."

Meanwhile, the hashtag #banana was trending in India on Wednesday as many wondered in jest what would the elongated fruit be called if authorities were only going off of shapes.

Other users weighed in with memes and posts inspired by dragon-centered productions like Game of Thrones, How To Train Your Dragon and Dragon Ball Z.

Some were also quick to note that the country's controversial relabeling drive has finally reached fruit, after the rechristening of cities, railway stations and other landmarks.

Read more: Why is India on a renaming spree?

Celebrity chef Kunal Kapur, known for hosting and judging on MasterChef India, said, "Looks like our priority for the nation is set. We were not satisfied renaming the cities, we need to rename vegetables and fruits too. By the way, COVID is on, the economy took a hit, we are in the middle of a pandemic."