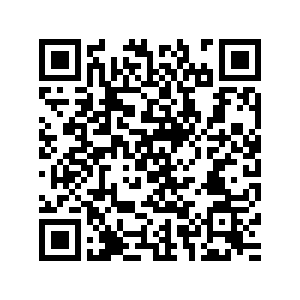 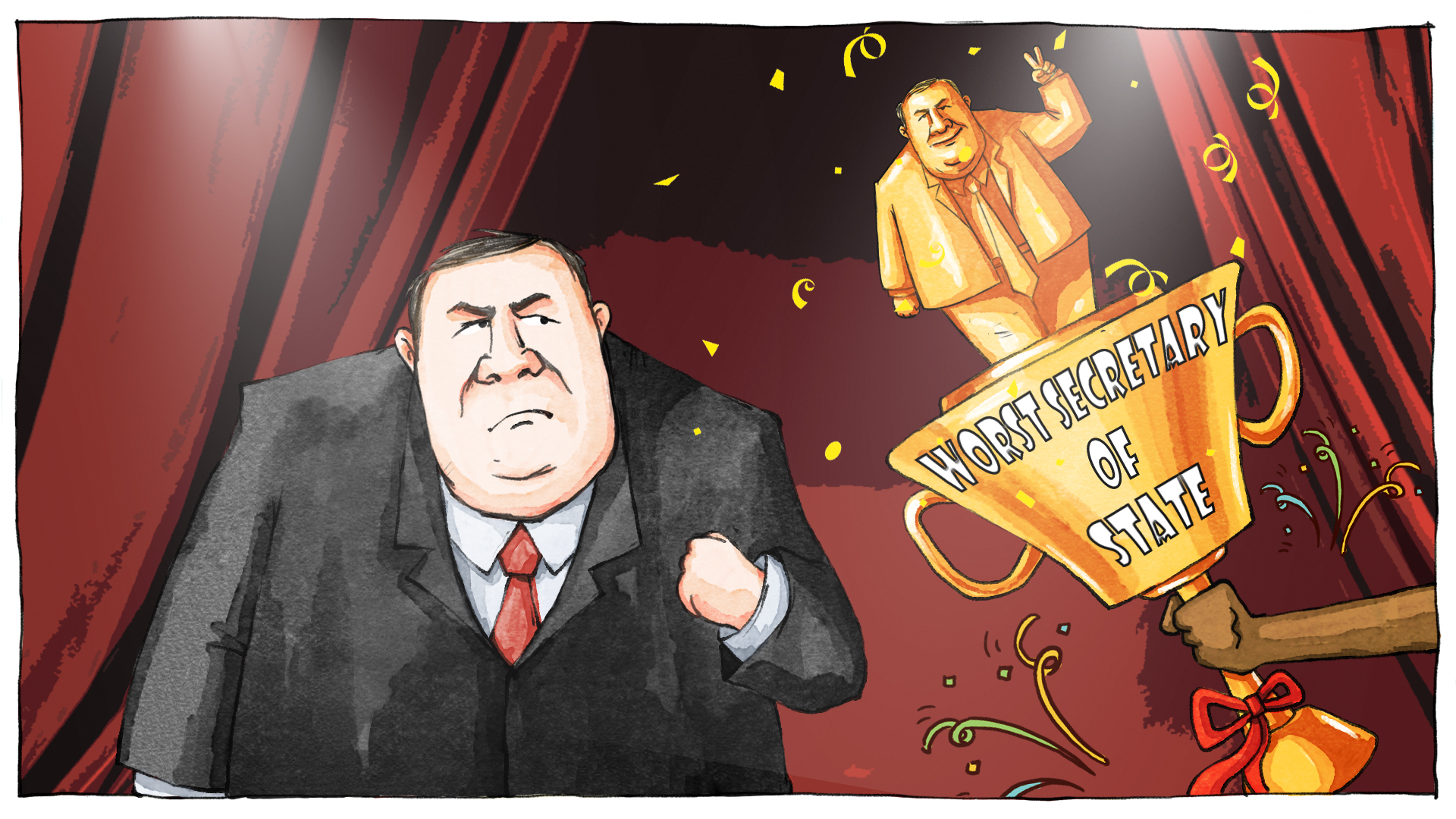 In the days before he left office, former U.S. Secretary Mike Pompeo posted dozens of tweets boasting his anti-China achievements and again hitting China on a range of issues.

But his self-proclaimed "achievements" and relentless attacks appear nonsensical based on a fact-check. Chinese Foreign Ministry spokeswoman Hua Chunying is accurate in her description of Mike Pompeo: the top U.S. diplomat, who prides himself on lying, cheating and stealing, has once again shown the world what the doomsday madness of sticking to lying diplomacy to the end is.

Recently, Pompeo doubled down on his accusations against China on issues such as the origin of coronavirus. People with discerning eyes would notice that he called it "the Wuhan virus" since the beginning of 2020. 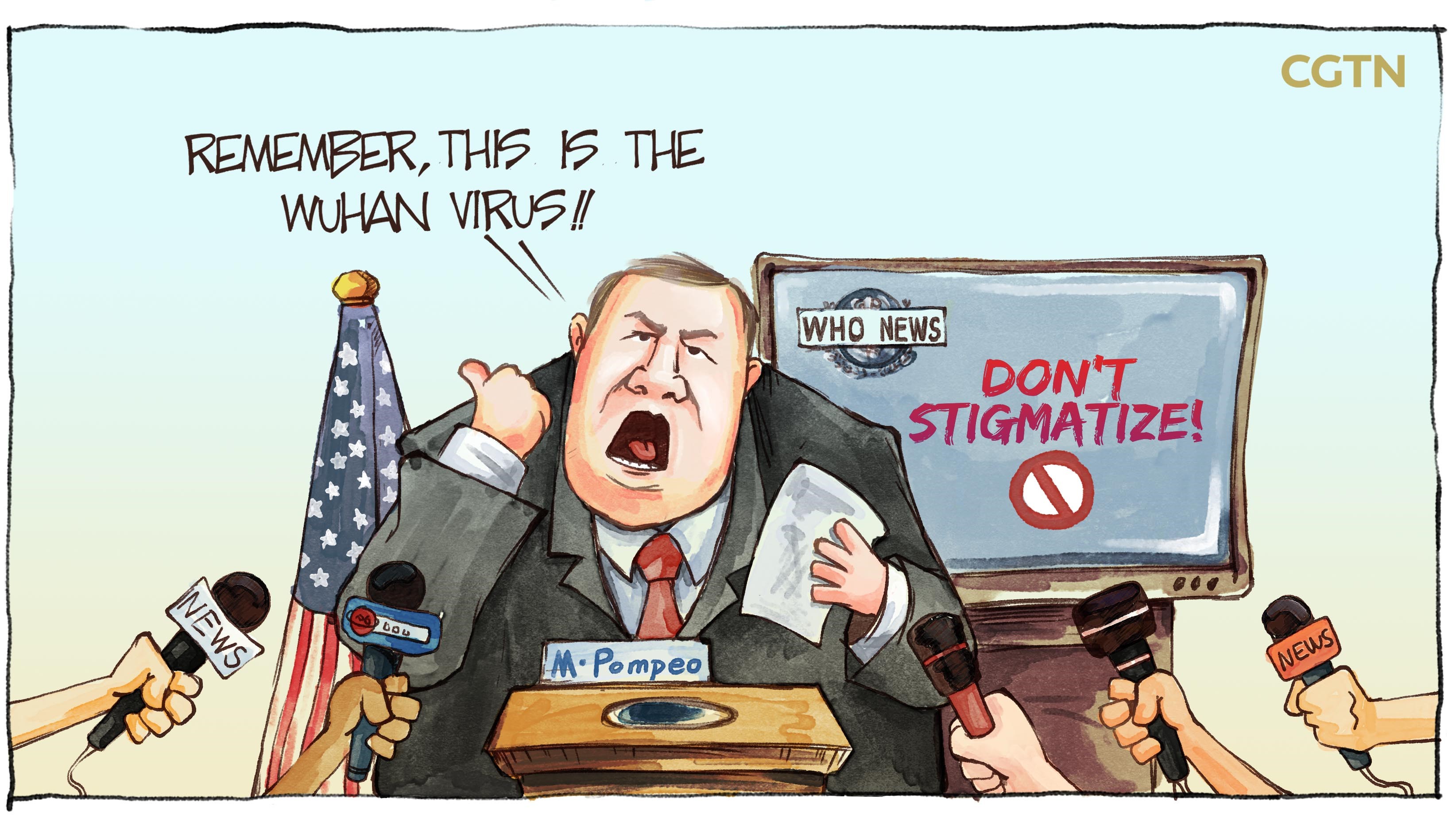 In the middle of last year, he claimed that "we've got enormous evidence that coronavirus came from a lab in Wuhan!” 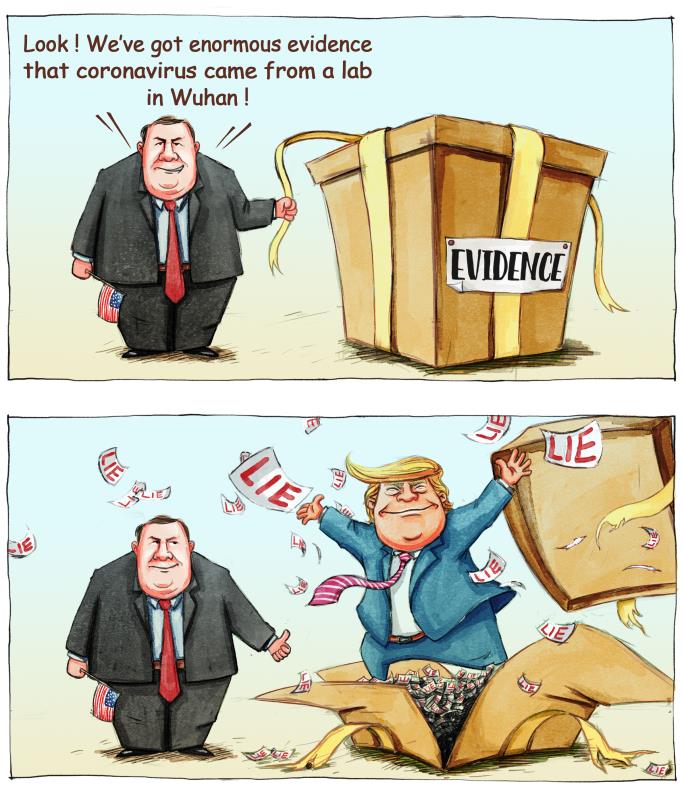 Even at the beginning of this year, he repeatedly pointed fingers at the Wuhan Institute of Virology by claiming that the U.S. has "new information" about the institute's links to the virus before the pandemic. However, we've been waiting for a whole year. Where is the evidence?

It is hard to know that where the virus came from, but it's easy to find out where the "anti-China virus" comes from. 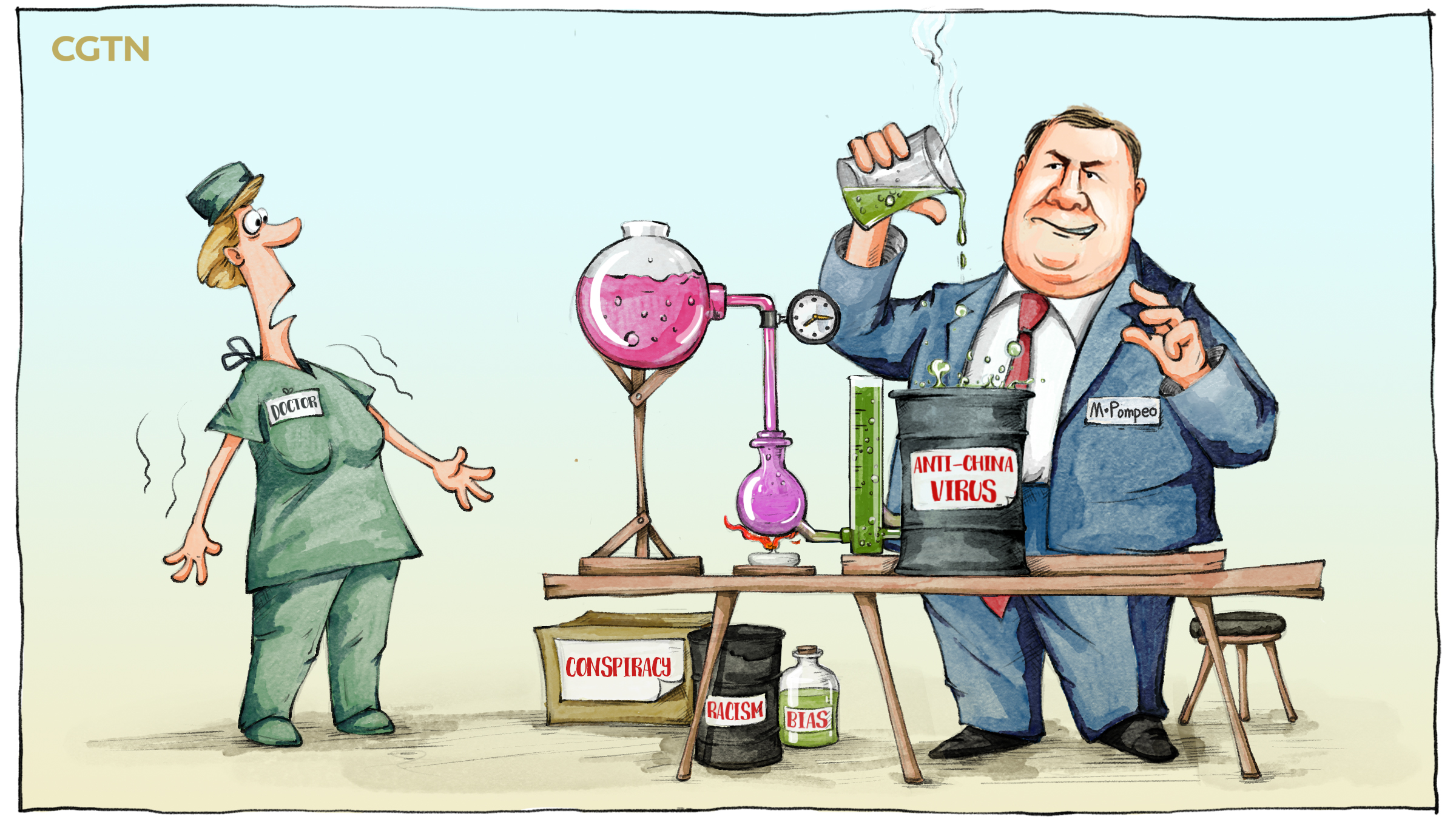 Remember Pompeo's famous quote? – "We lied, we cheated, we stole..." Is there any credibility left in being the top diplomat of the United States? 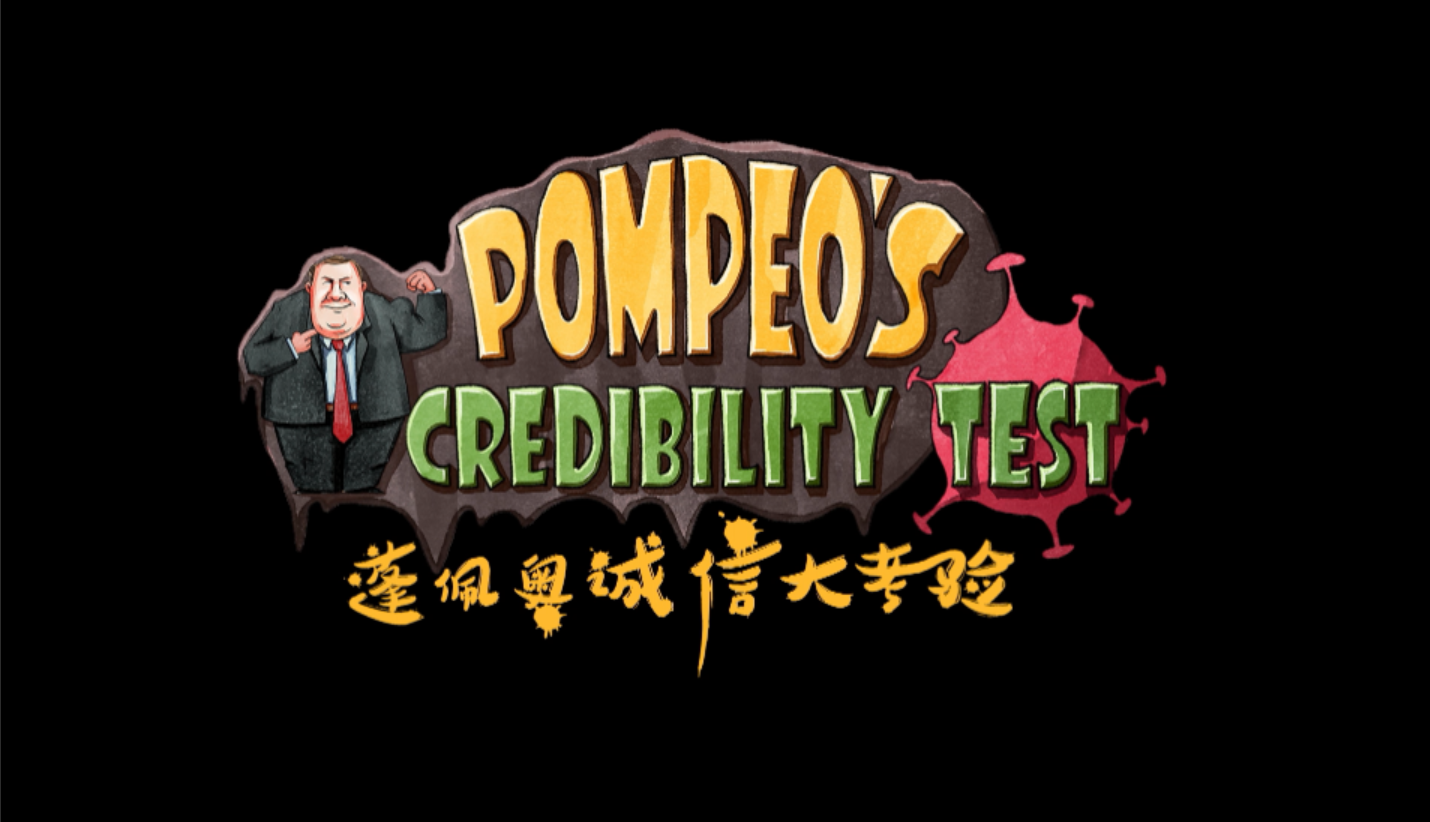 In July 2020, Pompeo conceded in a speech at the Richard Nixon Presidential Library and Museum that "the kind of engagement we have been pursuing has not brought the kind of change inside of China." But China is not a country you can change whenever you want to. 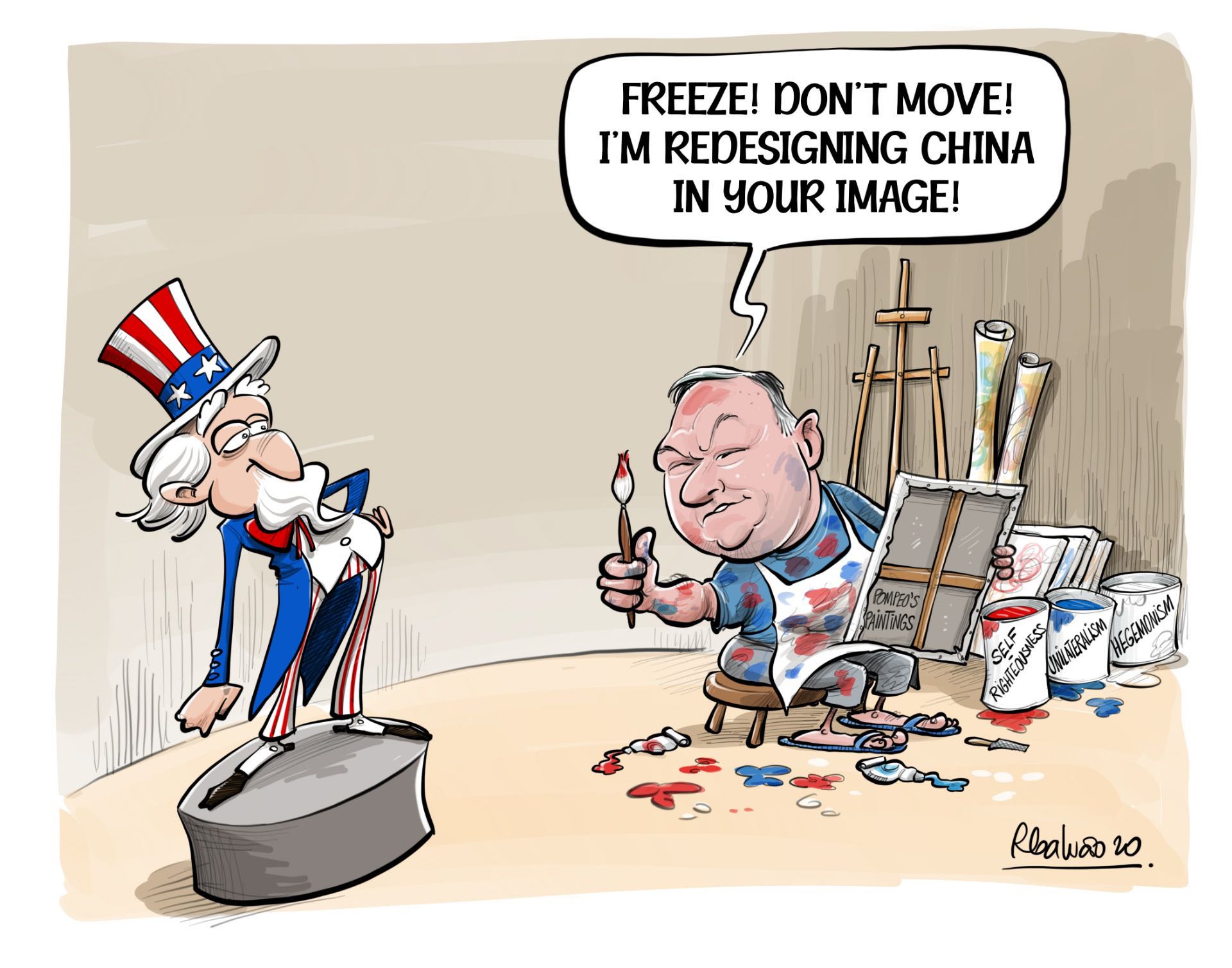 Drawing China as the U.S. – the wrong model /CGTN Cartoon

Drawing China as the U.S. – the wrong model /CGTN Cartoon

The U.S. frequently interferes with China's internal policies on Hong Kong, Xinjiang and Tibet, and Pompeo even falsely claimed that China has committed "genocide and crimes against humanity" in Xinjiang. Moreover, the U.S. has been constantly playing tough on China over issues involving technology, the South China Sea and the pandemic. 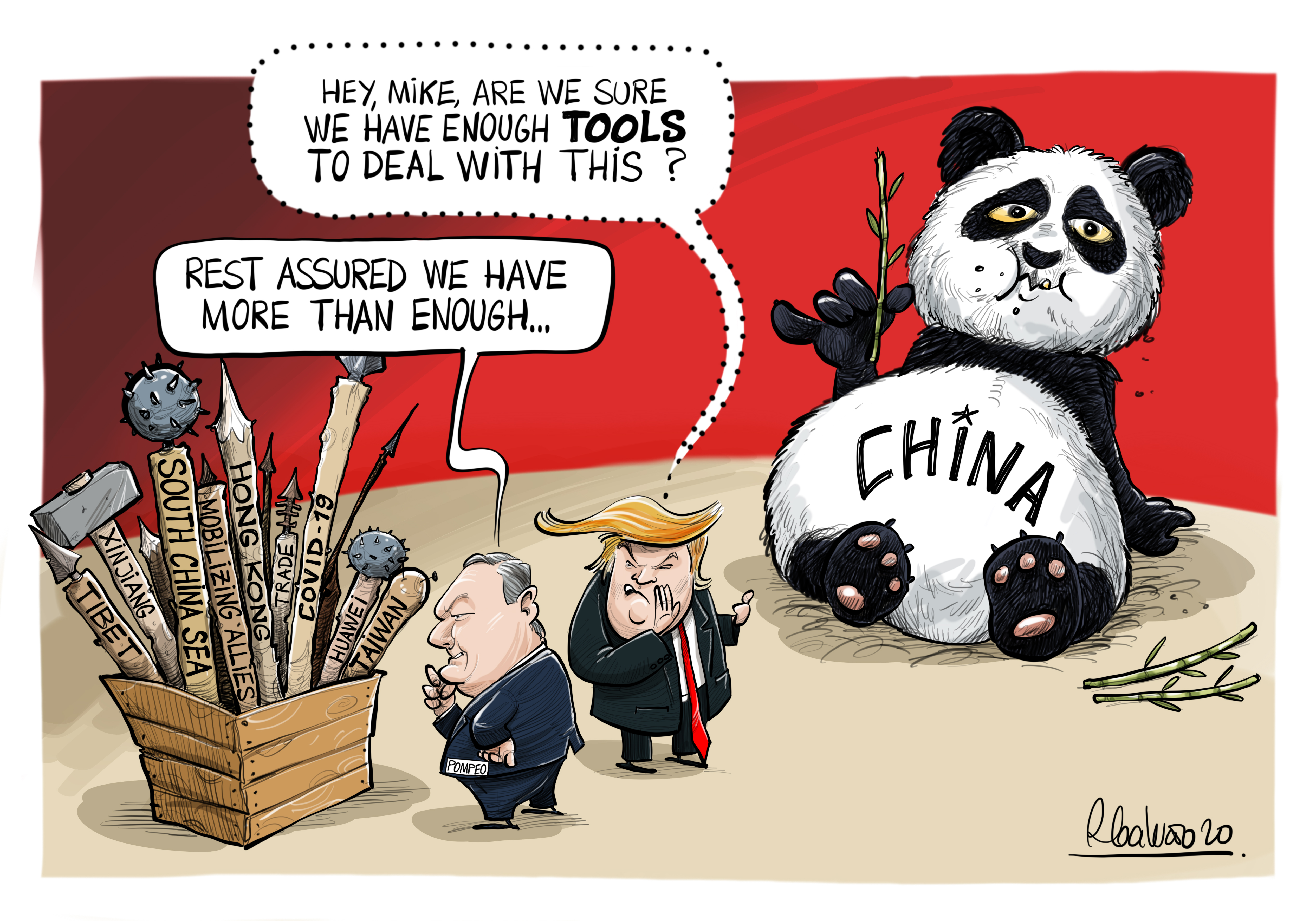 Democracy is a good thing to learn, but national sovereignty must be learned first of all. 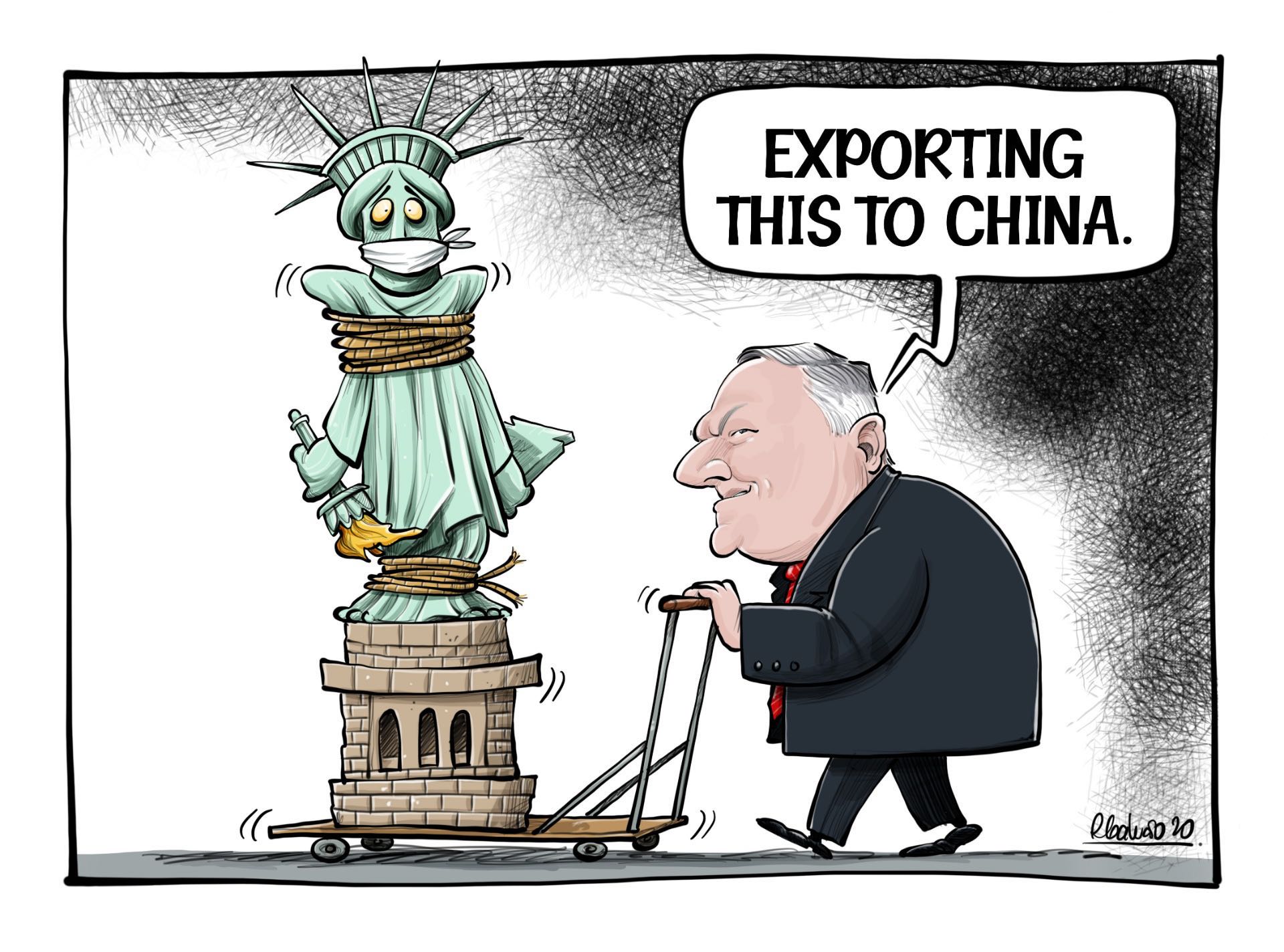 Pompeo hailed the U.S. as the leader of the "free world" and claimed that the Chinese government is a major threat to the "free world" today. But he has turned a blind eye to worrying about human rights conditions and shaky democracy in his own country. Who on the earth is fueling the "free world" that is on fire? 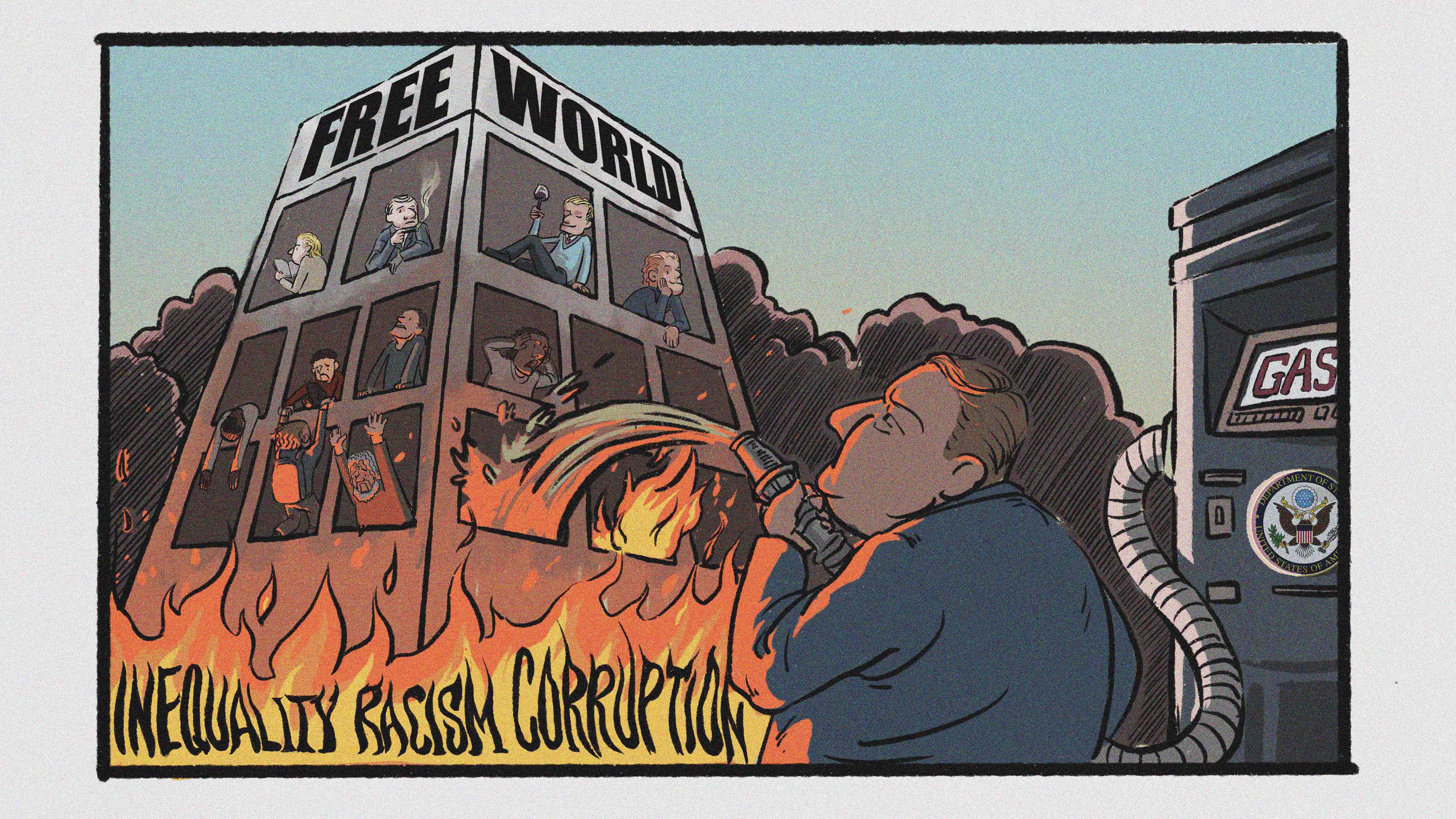 Pompeo has "Free Gas" for the Free World /CGTN Cartoon

Pompeo has "Free Gas" for the Free World /CGTN Cartoon

Pompeo's words and deeds are not only resented by other countries, but have even earned him the title of "worst Secretary of State in American history" back at home.

Over the past four years, Donald Trump and Mike Pompeo have been smearing and suppressing China in the name of "America First" and "Make America Great Again." But they have never been able to provide any evidence. We want to make it clear: lying will not make America great again. 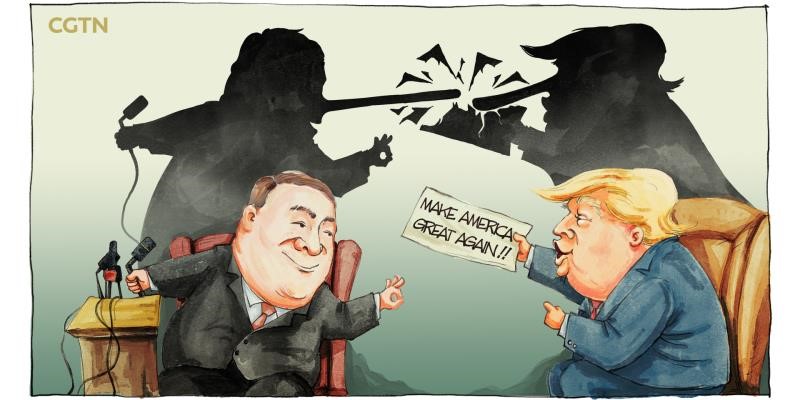 Finally, they left. But how will President Biden fix the potholes they left for him over the past four years? 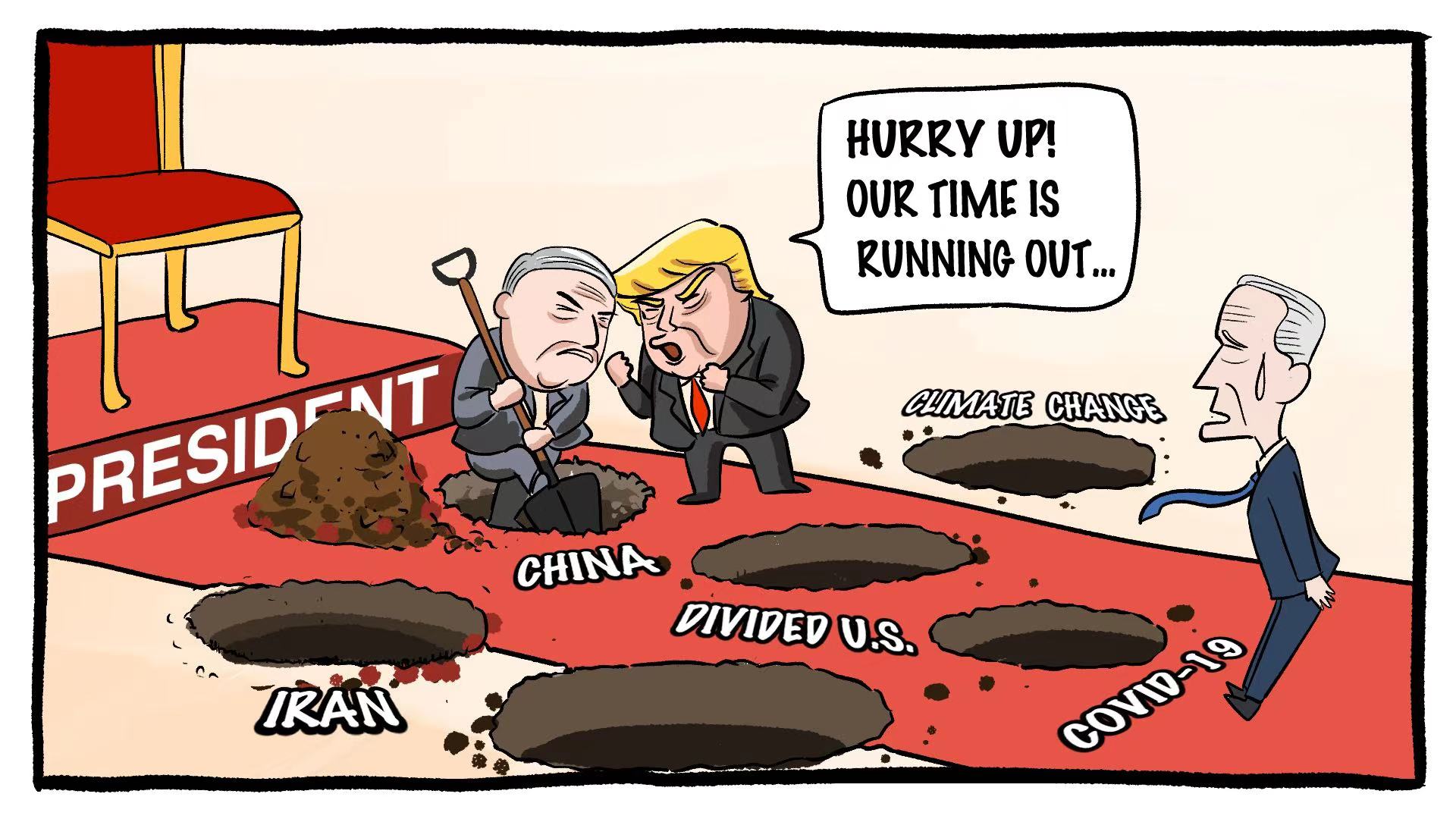