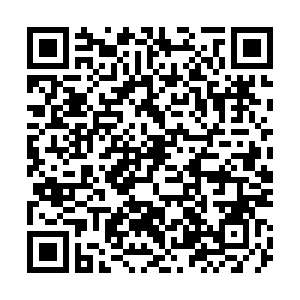 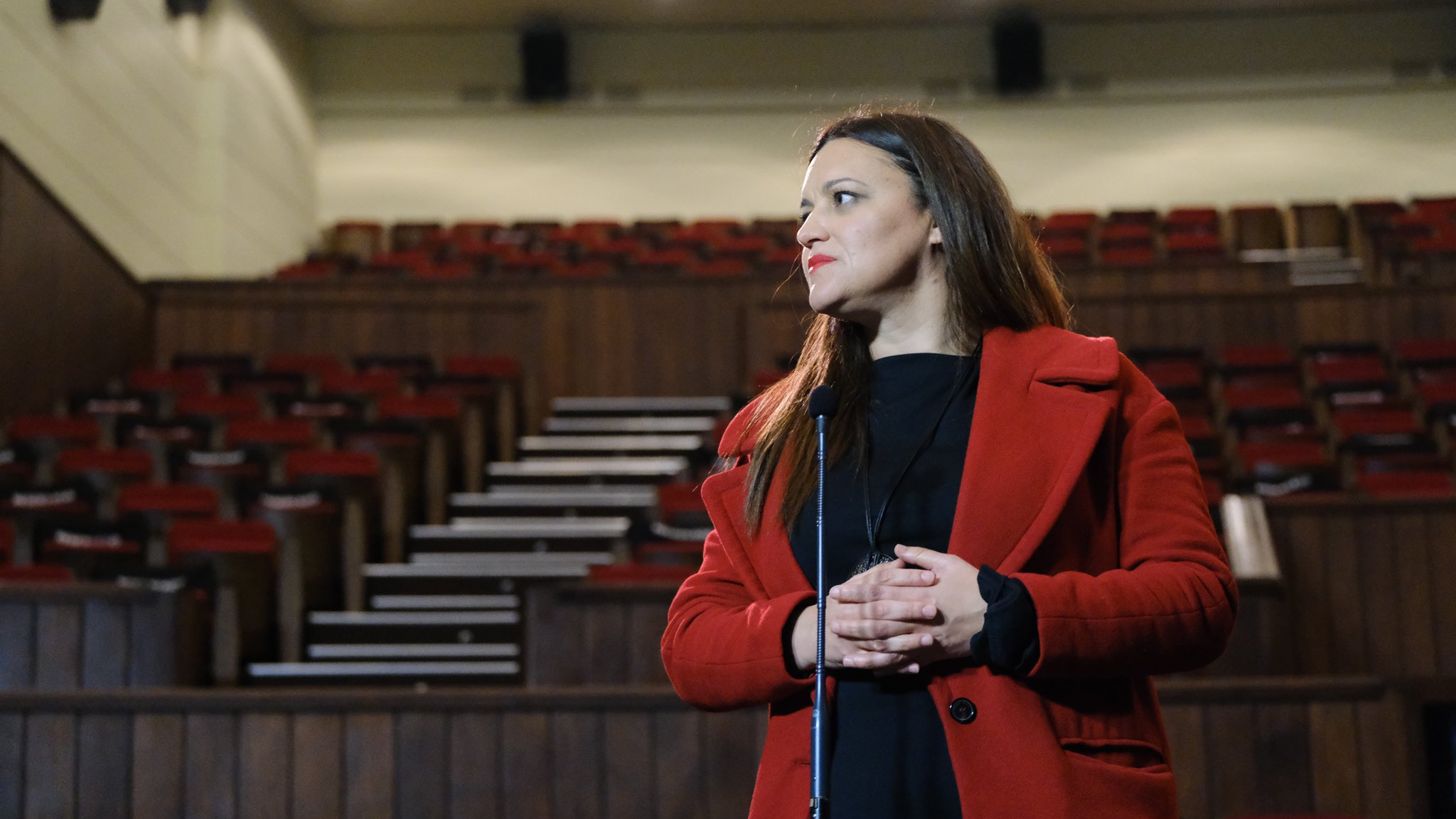 Portugal’s presidential campaign is underway, with voters set to make the final decision on Sunday, January 24. But this year, the elections are being tainted by a myriad of problems, with COVID-19 cases and deaths on the rise, following the softening of measures during the Christmas period, only to have far-right candidate André Ventura try to degrade female candidate Marisa Matias because she wears red lipstick.

"She [Marisa Matias] is not doing very well in terms of image, with all that red lipstick, as if it is a joke," he said at a campaign event.

Like many other insults Ventura has been dissing since being elected as a deputy in the Portuguese Parliament, namely against migrants and gypsies, the backlash was immediate and a Twitter storm was born.

The hashtag #VermelhoEmBelém, which translates to “Red in Belém” referring to the president’s official residency, started trending fast with many men and women going online with painted lips in protest to the remarks, which were not completely new.

In September 2020, he said, “this [gender] parity thing in the MP’s list is absolute nonsense.” In the same month, he called Ana Gomes, the other female presidential candidate and former member of the European Parliament, a “hysterical woman” and “friend of the minorities that live from our work.”

Asked about his comment, Marisa Matias, supported in the race by the Left Bloc Party, said simply, “the insult that man made against women says nothing about women, but everything about him.” 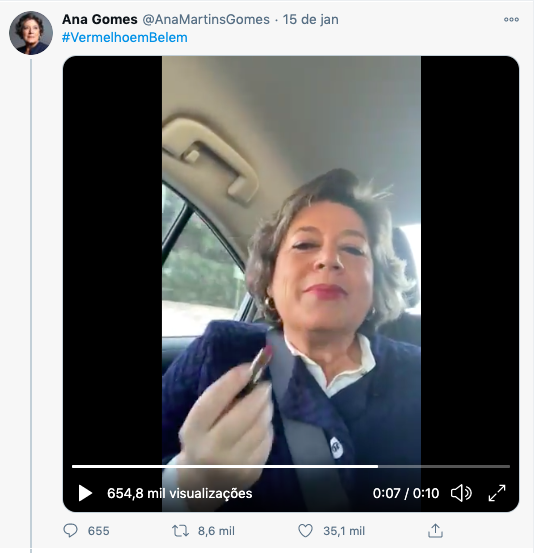 In support of Matias, rival socialist candidate Ana Gomes published a video on Twitter with her lips painted red and the caption #RedinBelém.

Members of the political class, artists, and journalists posted similar photos, among them Pilar del Rio, Spanish journalist and widower of José Saramago, winner of the 1998 Nobel Prize in Literature, and Brazilian musician Chico Buarque, who has also been vocal against Brazilian President Jair Bolsonaro, who is also a well-known misogynist.

Pilar del Río wrote, “it’s very interesting that an insult has become a demand for democracy in the face of a candidate who is clearly not a democrat.” Wearing the red lipstick is a “sign of freedom” against the extreme right, she said.

From the Portuguese left, many party colleagues came out in support of Matias and women’s participation in politics. “I heard that red lipstick bothers the extreme right!” said deputy Pedro Filipe Soares.

Like Ventura, in 2017 Polish lawmaker Janusz Korwin-Mikke made headlines by saying in the European Parliament that “of course women must earn less than men because they are weaker, they are smaller, they are less intelligent.”

This kind of mentality is a live example of what an Inter-Parliamentary Union and the Parliamentary Assembly of the Council of Europe report revealed at the end of 2018.

Among 123 women from 45 European parliaments, 81 members of parliament (MPs) and 42 parliamentary staff, 67.9 percent were the target of comments relating to their physical appearance or based on gender stereotypes. 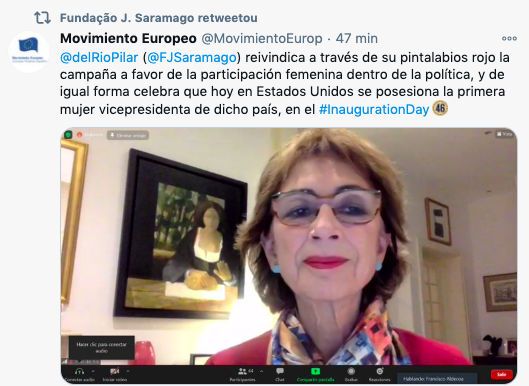 An astonishing 85.2 percent of the female MPs suffered psychological violence during their time in office, and 46.9 percent had received death threats or threats of rape or beating.

“Female MPs under the age of 40 were more frequently subject to psychological and sexual harassment,” the document says, adding that those that fight these issues of gender inequality and violence against women were “often singled out for attack.”

Like many other women, most of these seemingly powerful women choose not to report the attacks they are subjected to for fear of not being believed or taken seriously, Thérèse Murphy, head of operations for the European Institute for Gender Equality, explained to VoxEurope.

“Often, even if the harassment was proven, there is no conviction, and there is no penalty, and the women then have the most awful experiences from their own peers: from other women, from other workers, from her superiors and from the society which blames her for allowing it to happen in the first place. So, it is a very long and painful journey to make a complaint,” Murphy noted.

The European Women’s Lobby (EWL) asserts that “sexism reinforced by gender stereotypes is one of the factors that run counter to achieving gender equality and the full recognition of women’s rights.”

Announcing a new “Mobilize Against Sexism” project supported by the Council of Europe, the EWL said the “prevalence of sexism continues to suppress and oppress women and girls” subjecting them to violence aimed at silencing and pushing them to poverty, economic dependence, gender pay and pension gaps, unequal participation in political life, as well as unequal access to public services and common goods. 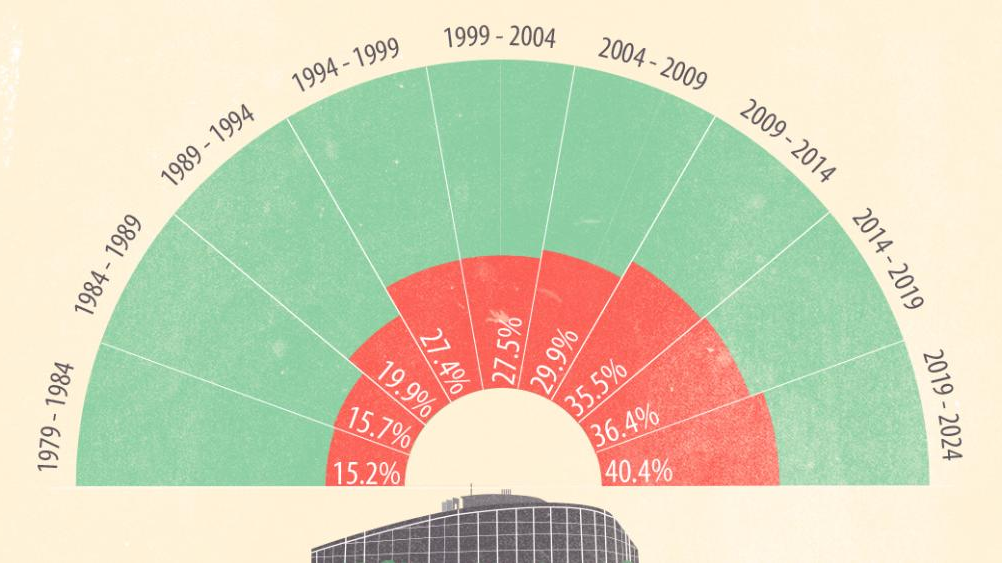 Proportion of women (red) and men (green) in the European Parliament./ Source: europarl.europa

Proportion of women (red) and men (green) in the European Parliament./ Source: europarl.europa

The Gender Equality Index (GEI), monitored by the European Institute for Gender Equality (EIGE), shows a positive evolution in Portugal when it comes to gender equality. Since 2010, Portugal’s score increased 7.6 points to 61.3 out of 100 points. But still, below the EU’s score of 67.5 points.

This highlights an underlying, but acknowledged issue in the EU: even though “over the past decade, measures taken at EU and national level have led to advances (…) progress has been slow, and there are considerable differences between member states,” reads a preparatory document issued to members of the European Parliament in January this year.

Today, the European Parliament votes on two reports on a gender equality strategy and the gender perspective in the COVID-19 crisis and post-crisis, since the pandemic “disproportionately affects women in the socio-economic sphere.”

The Commission is asked “to adopt a roadmap with clear timescales, a monitoring mechanism, and indicators of success” by promoting women's and girl's participation in the digital economy and the recovery process.

Now, at an age when the European Parliament representation of women stands at 40.4 percent against 15.2 percent in the 1979-1984 period, red lipstick continues to shock men and be a symbol of women’s fight and liberation, after all, it was one of the marks of the suffragette movement in the early 20th century.