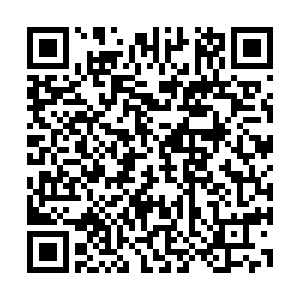 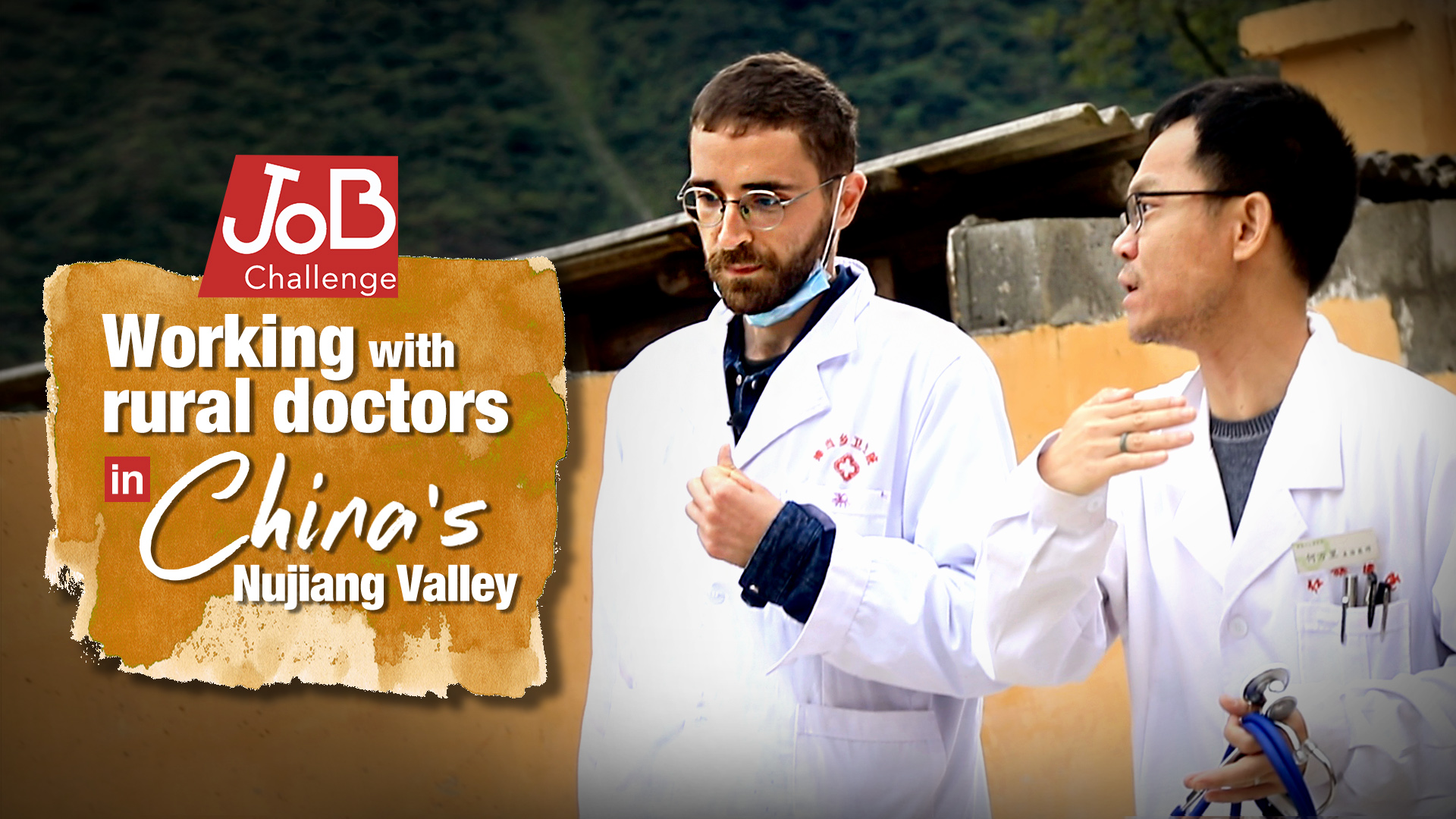 After six months in his new post, He Wanli still hasn't gotten used to all the climbing the job requires.

The 44-year-old general practitioner built his career in Zhuhai, a port city facing the South China Sea, and famed for its sandy beaches and startup culture. But in early 2020, he packed his bags and traveled some 2,000 kilometers to the deep highlands of Yunnan Province.

His journey westwards was not some kind of reverse migration or a form of escapism from the pressures of the urban bustle. One doesn't simply happen in the little town of Pengdang.

Gongshan County, where Pengdang is located, is so far-flung that it's faster to get to Myanmar from there than to drive to a major Chinese city. The only way in and out of the area is a two-lane road stretching for hundreds of kilometers along the length of a valley. The route is sandwiched between precarious slopes prone to landslides on one side and the Nujiang River's violent torrents, ominously known as the Angry River, on the other.

Dr. He swapped the seascape for mountain scenery and the taxing shifts at emergency rooms for a slower-paced stint at a community hospital. 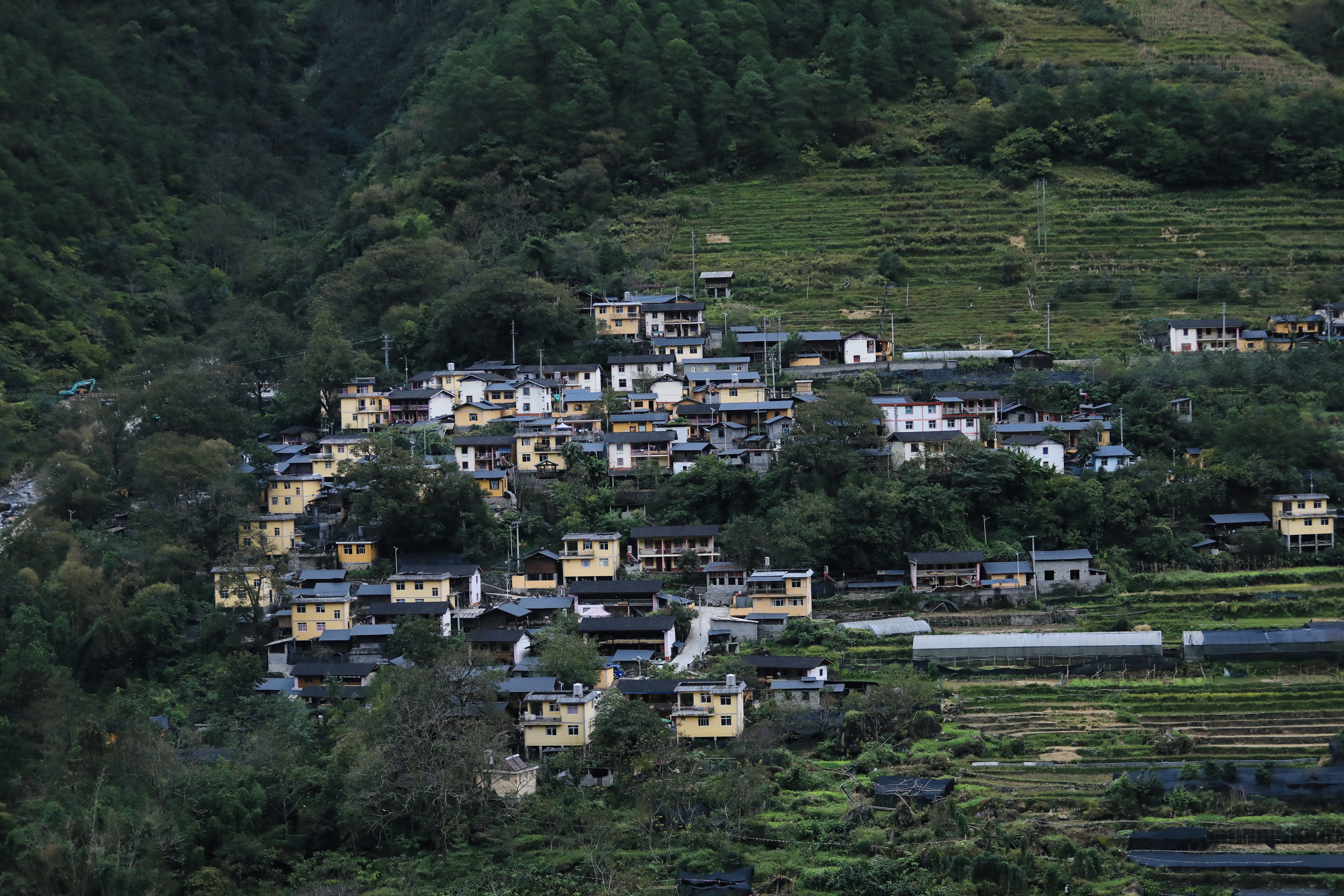 Gongshan County is deep in the mountains of Yunnan Province. Communities there are perched above the Nujiang River valley. /CGTN

Gongshan County is deep in the mountains of Yunnan Province. Communities there are perched above the Nujiang River valley. /CGTN

His hospital dispatched the doctor to help get health care at the grassroots level up to snuff as part of China's campaign to purge extreme poverty in the countryside. The country's undertaking, decades in the making but turbocharged in recent years, came with a pledge: By the time the neediest climbed over the poverty line, they would have been guaranteed safe housing, compulsory education, and basic medical care.

For those who have little in life, good health is their greatest asset. A chronic cough or nasty infection could mean the difference between a lifetime of penury and a future of possibilities.

Millions in China have been trapped in poverty because of illness. By the end of 2019, 45.7 percent of the country's impoverished rural population consisted of the elderly, sick people, and people with disabilities, according to one report. Ensuring their access to convenient, affordable, and quality medical services removes a major stumbling block in the country's path to prosperity – and that's where medical professionals like Dr. He comes in. His mandate is clear: to treat and train.

On the first day, I met him in the town's hospital, a humble three-story building that evolved from a wooden shed built-in 1984, Dr. He had planned a CPR workshop for young medical workers.

Surrounded by a note-jotting crowd in lab coats, he spoke with eloquence and clarity, dropping every once in a while surprise questions on medical protocols taught in previous sessions. In pairs, attendees took turns to resuscitate a dummy, giving chest compression and pumping air through the mouth.

"It's an important skill," he told me after the class. "I have to share my knowledge." 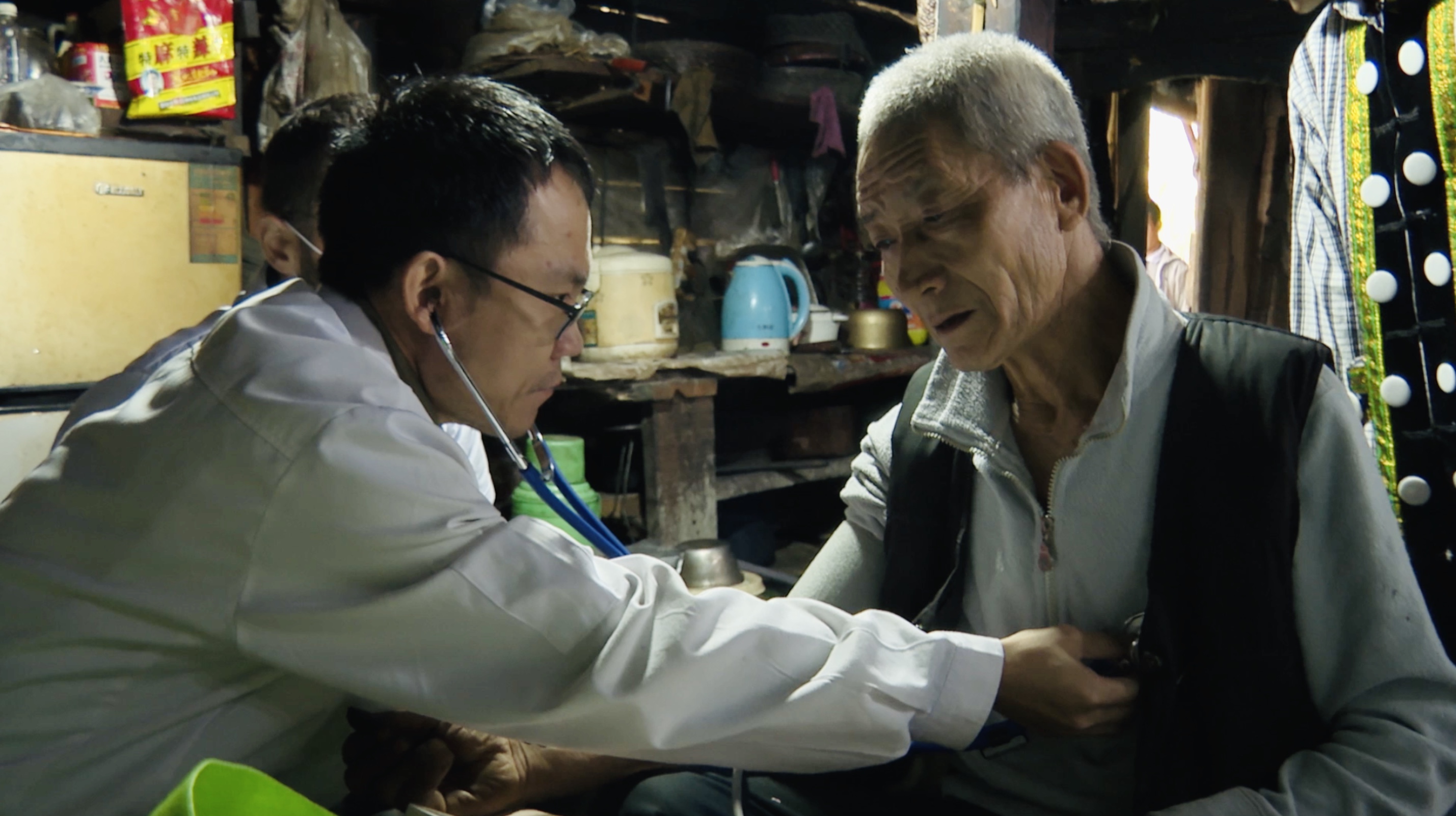 Dr. He Wanli checks the heartbeat of an elderly as part of an annual free health checkup for people over 65. /CGTN

Dr. He Wanli checks the heartbeat of an elderly as part of an annual free health checkup for people over 65. /CGTN

The mentorship program helps bridge part of the gap between urban and rural health services. Countryside clinics generally lack the resources of urban medical centers, and they're not exactly a magnet for exceptional or specialized talent in the field.

At Pengdang hospital, the equipment is either worn out from excessive use or has never been touched, while the pharmacy houses a limited selection of drugs. Operations here are still a far cry from city standards, despite growing over the years. Services such as oncological medicine and physiotherapy are unavailable, forcing the personnel to refer patients to facilities outside the valley.

But the small scale doesn't mean a small impact. The staff is the first point of care for rural residents, providing the most basic but essential health services. With a hospital right in their backyard and various government-subsidized health insurance schemes, people feeling unwell have a place close to home to turn to, although doctors admit it's been a learning curve.

Because of geographic remoteness, sick townspeople previously had to travel long and far to see a doctor, a hassle that bred a habit of turning a blind eye to pain or discomfort until it became too nagging. It also didn't help that treatment didn't come cheap, causing poor households to think twice before consulting a specialist and making them reliant on self-medication and neighbors' advice. 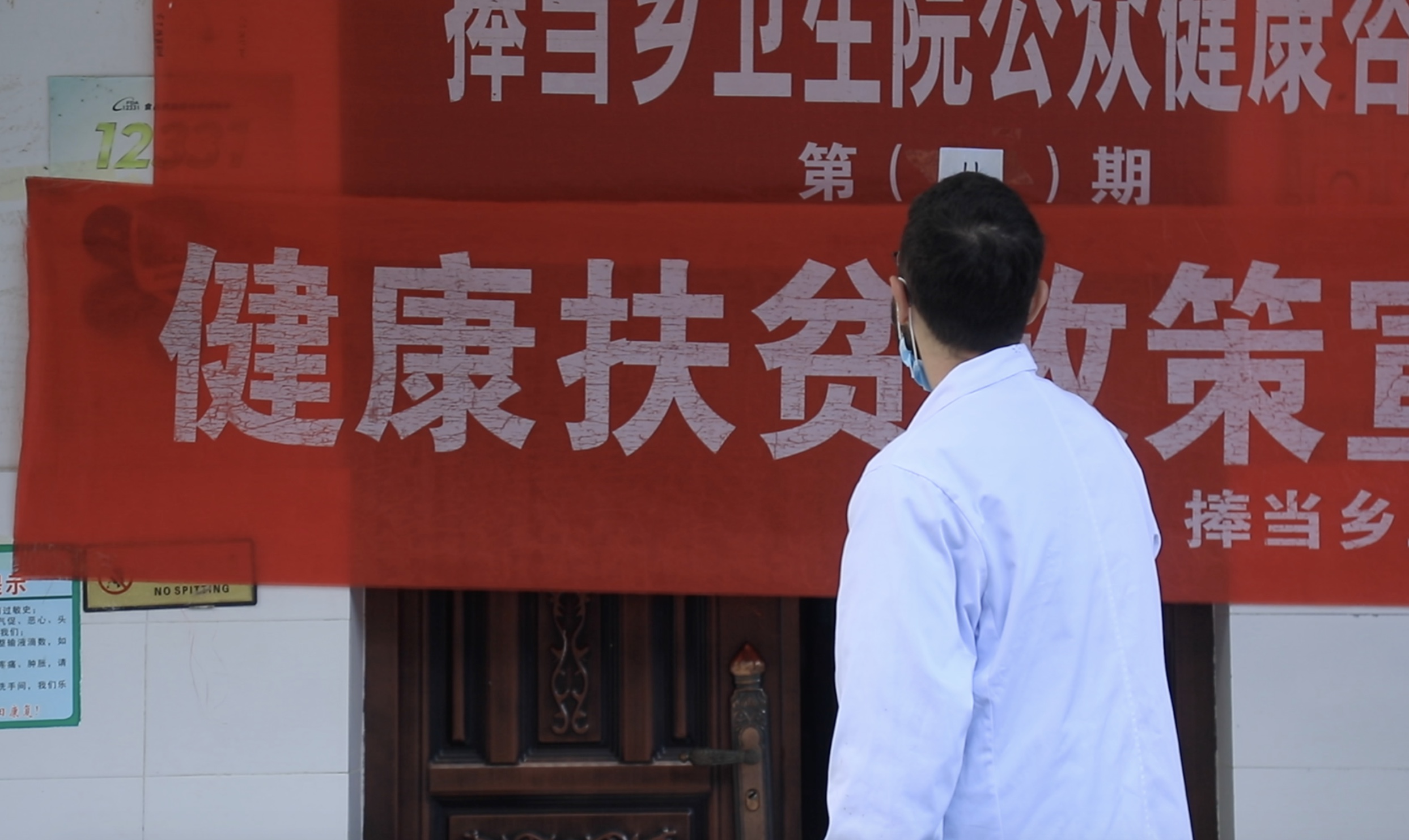 The shifts at the hospital are mostly quiet, and visitors are few. It's a welcome change for the city doctor from the characteristically crowded hallways and throngs of patients at urban hospitals. But the job in the countryside entails venturing outside the gates for house calls, a duty that in this alpine area requires strong legs – something Zhuhai's Dr. He is still working on.

On a gloomy October morning, I joined a team from the hospital on a hike to a small hamlet perched on a mountaintop and only accessible on foot. We navigated winding dirt paths that turned skywards and which relentless rains had rendered slippery and muddy. To make things more challenging, the hospital staff had to carry medical equipment and snacks on their back.

The team was carrying out their annual health checkup for people over the age of 65, a free service that's part of the local poverty reduction campaign. As doctors explained, the consultation helps paint a detailed image of seniors' health situation and enables the detection of health problems that would otherwise go unnoticed.

In a house that was temporarily turned into a clinic, old villagers, back bent from years of working the land, thronged in to get examined. Most were healthy, except for a few showing symptoms of hypertension and one with uneven heartbeats that required further investigation at the hospital.

At a neighbor's place, the team treated a man for a deep leg wound that had festered. The procedure was done under the flashlight of a mobile phone that I shone at the gash while trying to look away from the hair-raising sight of dried blood and oozing pus. We later learned that the man's son had thought the injury wasn't serious enough to warrant the troublesome trek down the mountain.

Our timing couldn't have been more perfect. It also couldn't be any clearer that visits like this are crucial for those who can't make the short trip to the hospital. 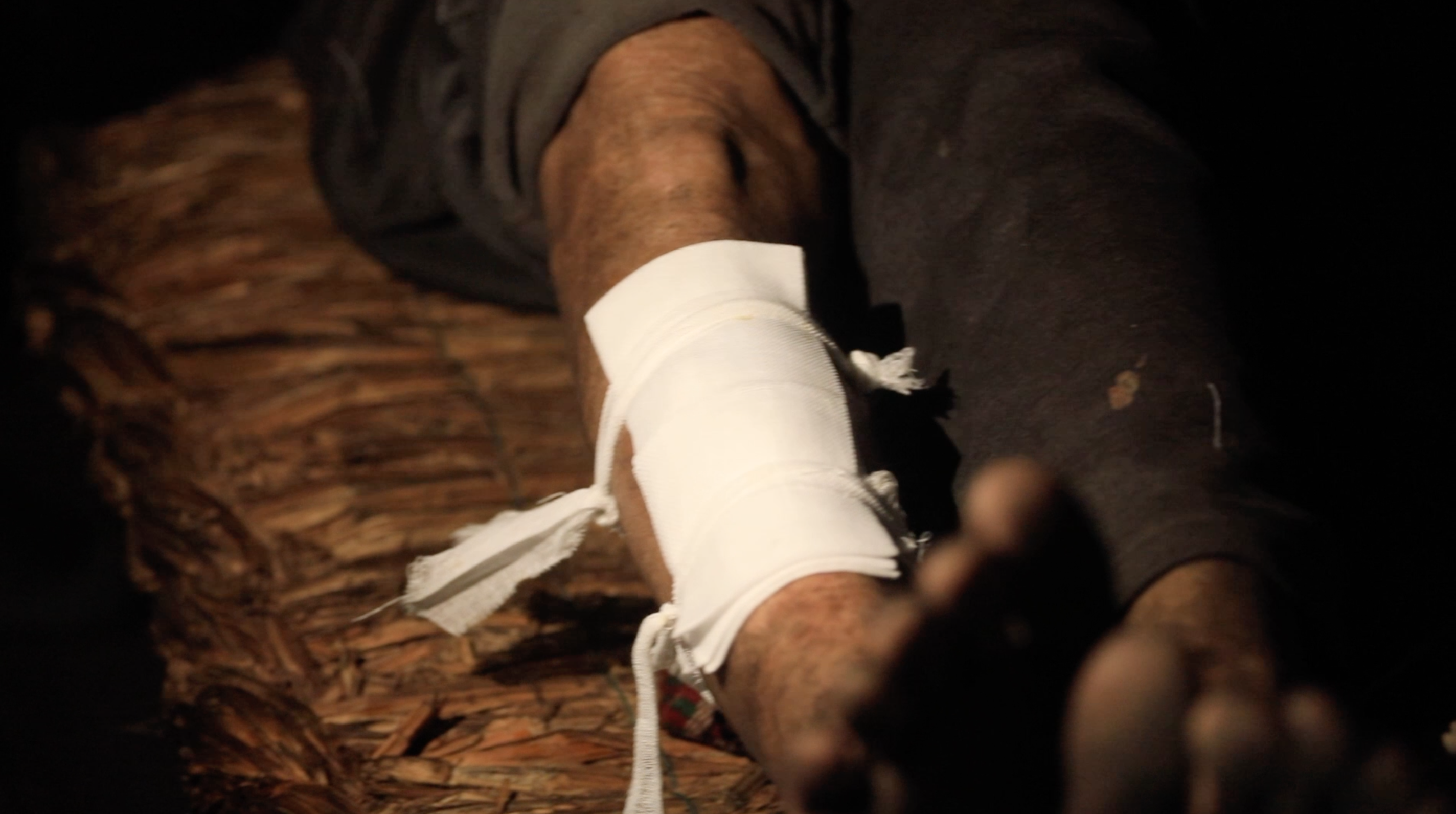 Doctors tend to a leg injury that an old man had sustained. They believe soil was used to treat the wound, which worsened the situation. /CGTN

Doctors tend to a leg injury that an old man had sustained. They believe soil was used to treat the wound, which worsened the situation. /CGTN

Despite the many inconveniences, the team didn't seem to mind their daunting duty. They did the job with competence, cheerfulness, and utmost care undeterred by the pesky rain and malfunctioning gadgets. They took their time answering medical questions, punctuating their consultation with lighthearted humor and concerning appeals for follow-ups at the hospital. Not even the fading daylight could get them to rush things.

A medical career is nothing short of a status symbol, but the health care workers in Pengdang seem to care little about the perks that come with the title. They go about their job with a can-do attitude and make do with the limited resources at hand. Here, the most basic health services are provided with the most basic quality of a good doctor: empathy.