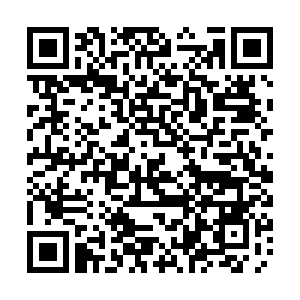 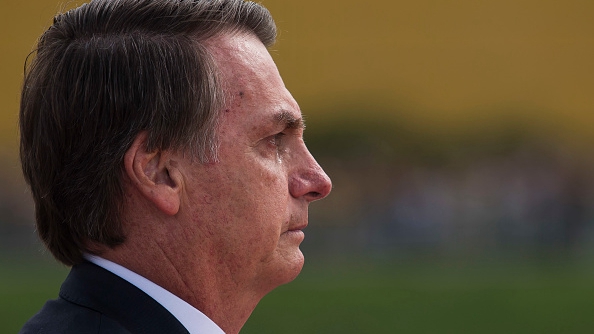 Nearing 219,000 deaths by COVID-19, Brazil continues to face the pandemic in an unstable political environment, with President Bolsonaro and his government under severe criticism and risk of legal repercussions.

On Monday, Ricardo Lewandowski, a judge from the Brazilian Supreme Federal Court, authorized an inquiry to investigate Health Minister Eduardo Pazuello's role in the collapse of Manaus public health system. The minister allegedly had information about a short supply of oxygen and was late to solve the problem causing deaths of dozens of critical COVID-19 patients by asphyxiation.

Lewandowski's approval came after a request from the Attorney General's Office following complaints from several political parties, according to the Portuguese news agency Lusa. The minister and its office made omissions during the health crisis in the State of Amazonas, which Manaus is the capital that led to patients' death, they said. 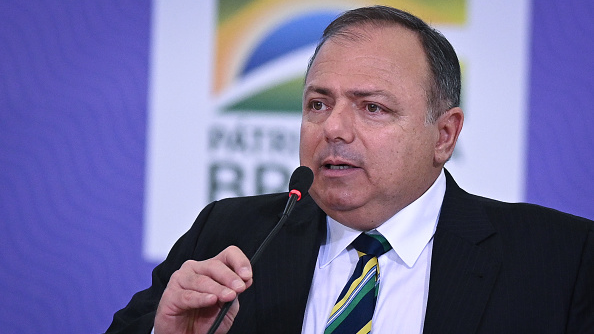 The Federal Police has until the end of the week to collect Pazuello's testimony, and they must conclude the inquiry in 60 days.

The office stated Pazuello had the legal duty and possibility to mitigate the situation, which can be described as a passive omission and may result in civil, administrative, or criminal liability.

The same document added that the Health Minister was informed in the Christmas week of 2020 that the public health system in Manaus was nearing collapse. But they only sent representatives to the city on January 3, one week after the calamitous situation was identified. Quoted by El Pais, Panzuello admitted at a press conference on Monday to know about the "imminent collapse" of Manaus since December 8.

The office also noted that the government distributed 120,000 units of hydroxychloroquine to treat COVID-19 but without giving scientific proof.

Ministers can only be investigated by the Attorney General's Office, so the move, the first against any of Bolsonaro's ministers, might have caused some alarm in the presidential palace. 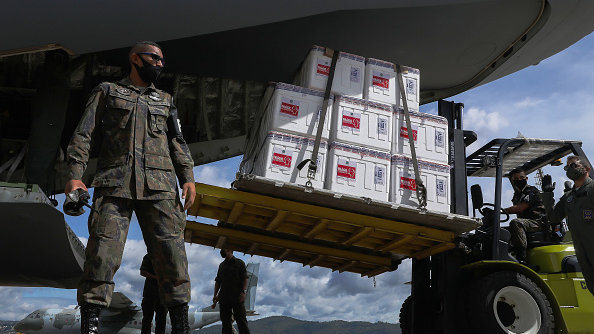 Loading nearly 6 million doses of the CoronaVac vaccine, developed by the Chinese laboratory Sinovac in partnership with Butantan Institute, to be distributed to all Brazilian states in Sao Paulo, Brazil, January 18, 2021. / Getty

Loading nearly 6 million doses of the CoronaVac vaccine, developed by the Chinese laboratory Sinovac in partnership with Butantan Institute, to be distributed to all Brazilian states in Sao Paulo, Brazil, January 18, 2021. / Getty

Also, on Monday, the president of the Chamber of Deputies Rodrigo Maia said the federal government must be investigated for its actions in the pandemic and that he supports the opening of an inquiry by a parliamentary committee focusing on the Health Minister.

Maia considers Panzuello committed at least three crimes: incentivized the use of ineffective treatments for COVID-19, for example, chloroquine; failed to incentivize the production of the Chinese vaccine together with Butantan Institute for ideological reasons; and ignored the offer of 70 million vaccines by Pfizer, which had been delivered in December.

In a press release, the Ministry said it didn't answer Pfizer because 70 million is not enough to vaccinate 212 million citizens, which "would frustrate all Brazilians" but also because of the "abusive" contract conditions. Brazil was asked to renounce its foreign assets as a payment guarantee and sign a term of responsibility for collateral effects of the vaccine exempting Pfizer, creating "a barrier in the negotiation and buying process." 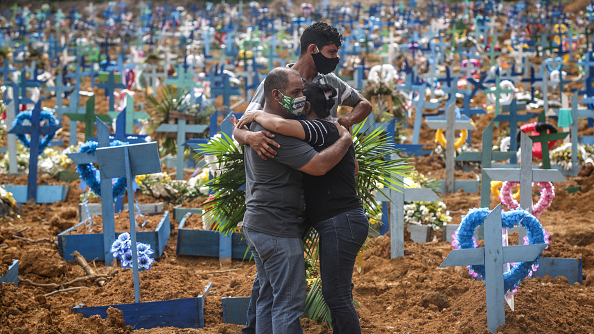 In a massive effort to understand the evolution of the pandemic in Brazil when it comes to the law, the 10th edition of "Rights during the pandemic" bulletin states that there is "an institutional strategy of virus propagation, promoted by the Federal government under the leadership of the President."

The bulletin, firstly reported by El Pais and made by the Center for Studies and Research on Health Law (CEPEDISA) of the University of São Paulo and the non-profit organization Conectas Human Rights, analyzed 3.049 federal norms issued in 2020 and created a timeline of government actions.

The timeline shows how the government obstructed state and municipal response and how the political discourse acted against public interest by using economical, ideological, and moral arguments along with fake news and unproven technical information to "discredit health authorities, weaken public adherence to health recommendations and promote political activism against health measures necessary to contain COVID-19".

"The results remove the persistent interpretation that there would be incompetence and negligence by the federal government in managing the pandemic," the report says, adding that the data reveals "the commitment and efficiency of the federal government in amply disseminating the virus in national territory, with the objective of restarting economical activities as soon as possible and at any cost." 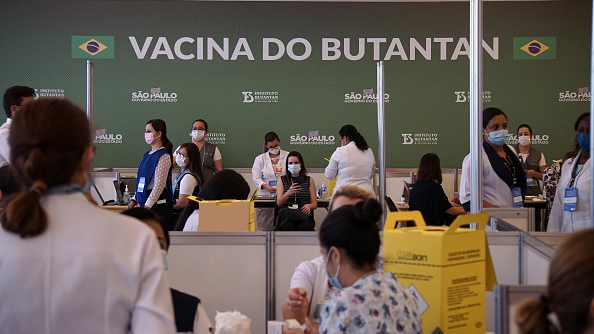 Health professionals being vaccinated in the Hospital das Clinicas, Faculty of Medicine, University of Sao Paulo, in Brazil, January 20, 2021. /Getty

Health professionals being vaccinated in the Hospital das Clinicas, Faculty of Medicine, University of Sao Paulo, in Brazil, January 20, 2021. /Getty

This plan led to more than 200,000 casualties and shows how "most of those deaths would be avoidable" with a containment strategy, "constituting a violation without precedent of the Right to life and Right to health of Brazilians."

The timeline provides an overall picture of the pandemic year, merging official decisions with public addresses made by Bolsonaro, who created distractions and chaos in institutions and the public.

Thousands of Brazilians protest over government's handling of COVID-19

For example, in July, when the country counted 71,469 deaths, Bolsonaro vetoed mandatory use of masks in commercial and industrial facilities, places of worship, and schools; fines for businesses that don't offer sanitizer; and the obligation of these establishments to provide free masks for its employees.

In the same month, he vetoed protection measures for indigenous communities, including access to potable water, hygiene supplies, hospital and ICU beds, ventilators, and even the internet.

"I'm sorry for those deaths. People die every day for different reasons. That's life," the president said that month.

The report also indicates that the situation could be more catastrophic if the Supreme Court and other instances hadn't vetoed several decisions, meaning there was an enormous effort to neutralize the president's actions that in other circumstances could have been used to fight the health crisis. 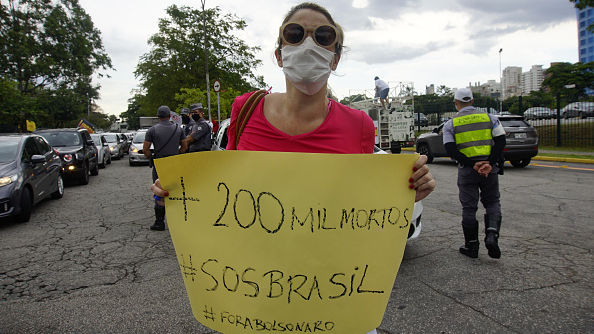 A caravan with flags of leftist political parties is seen during a protest against the government's handling of the COVID-19 pandemic and demanding the impeachment of Brazilian President Jair Bolsonaro, in Sao Paulo, Brazil, January 23, 2021. /Getty

A caravan with flags of leftist political parties is seen during a protest against the government's handling of the COVID-19 pandemic and demanding the impeachment of Brazilian President Jair Bolsonaro, in Sao Paulo, Brazil, January 23, 2021. /Getty

On another front, a group of 352 distinguished personalities asked the Attorney General's Office to open a criminal action against Bolsonaro in the Supreme Federal Court, El Pais said.

In the request made last week, the group accused the president of "sabotage to delay or even thwart the vaccination process against COVID-19 in Brazil". Among the subscribers are former Justice Minister José Carlos Dias, former president of the Health Regulatory Agency Gonzalo Vecina, and economists André Lara Resende and Luis Carlos Bresser Pereira.

The subscribers consider the president violated the law by discrediting the vaccine's efficacy and "planting that doubt in Brazilian's mind," and investing public funds in producing medicines lacking scientifically proven effectiveness, referring to hydroxychloroquine.

There are 57 impeachment requests in the Deputies Chamber waiting for a decision, but the chamber president already said none will go ahead, El Pais wrote.

A recent survey by Atlas Intel indicates 53.6 percent of the more than 3,000 interviewees support the impeachment of the president. Among the arguments, 54 percent said the president sabotaged the fight against COVID-19.