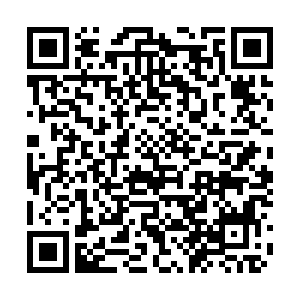 The Chinese mainland on Tuesday recorded 75 newly confirmed cases, the lowest daily increase in more than two weeks, according to data from National Health Commission (NHC) released on Wednesday. This included 55 locally transmitted cases and 20 arriving from outside the mainland.

For the past few weeks, China's northeastern and northern regions have seen a surge in cases. Most of the new cases have been found in the provinces of Jilin, Heilongjiang, and Hebei.

Of Tuesday's new local infections, Heilongjiang accounted for 29, while Jilin reported 14. Hebei, which had seen the biggest spike in cases this month, reported seven new cases. The remaining five cases were reported in Beijing and Shanghai. 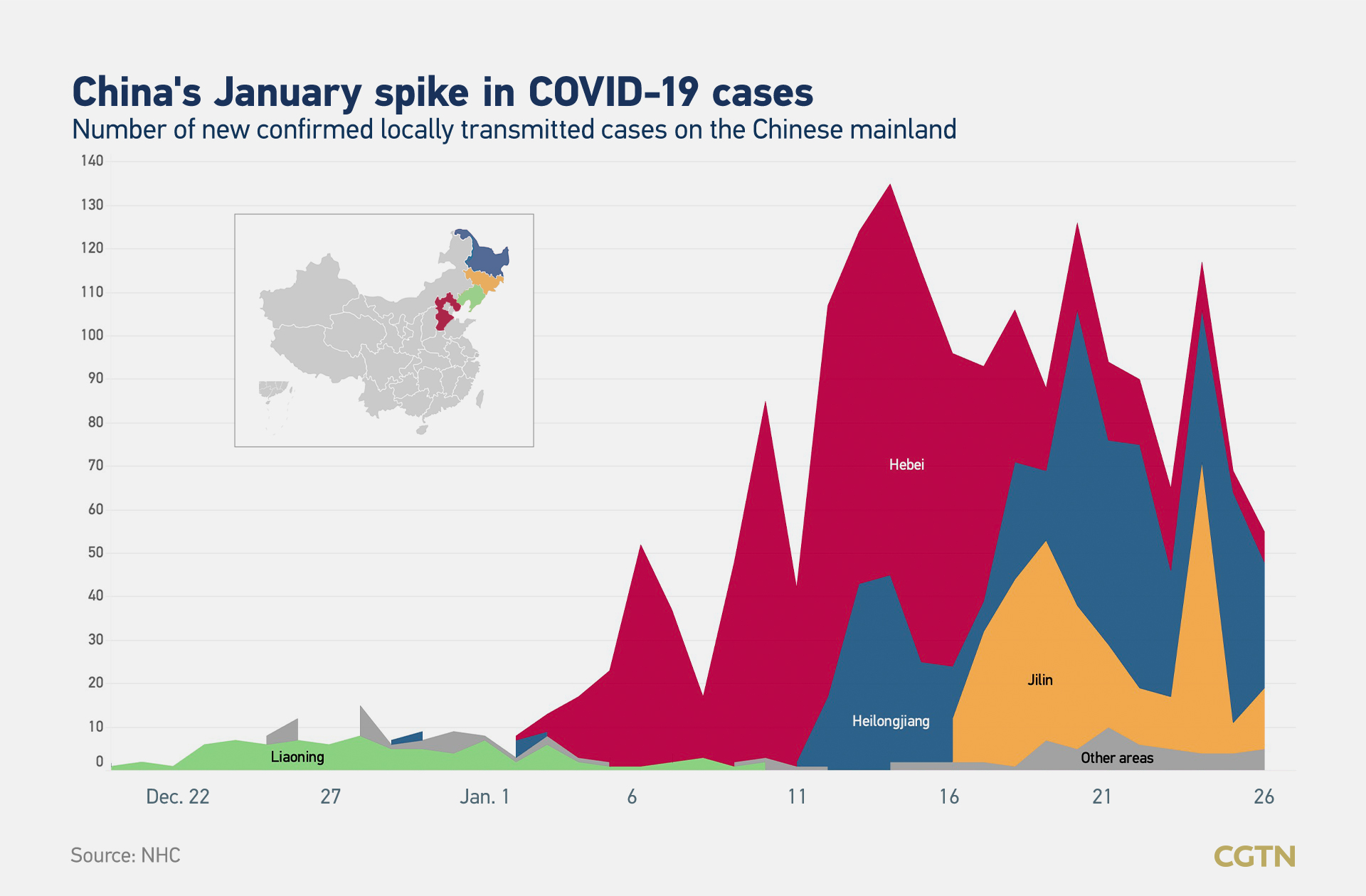 The outbreak in those provinces has been largely in rural areas, where medical infrastructure is weaker and control measures somewhat harder to enforce.

Activities such as wedding banquets or large group gatherings have fueled the spread, officials said.

In Hebei, over 900 cases have been reported since January 2, of which over 90 percent were in the capital city Shijiazhuang. The majority of cases were identified in villages in the city's Gaocheng District, scattered around the Shijiazhuang Zhengding International Airport.

Investigations have shown that many of the infected people had attended village events, including weddings and funerals. 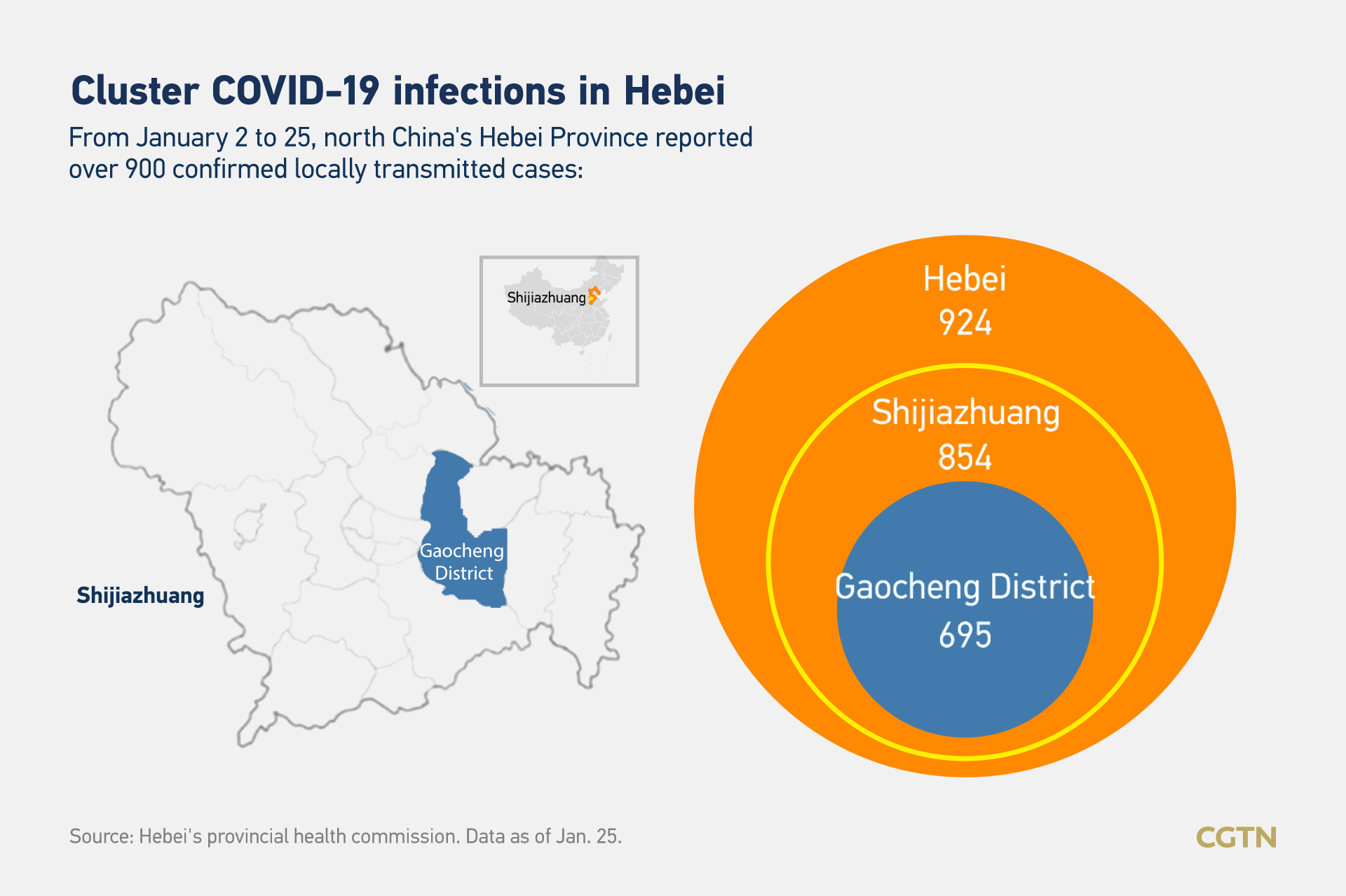 Cluster infections in Heilongjiang also rose widely due to activities such as wedding banquets or large group gatherings.

The current wave in Heilongjiang has led to over 500 confirmed COVID-19 cases in about two weeks, and many were reported in villages in Wangkui County. Villagers usually attend multiple marriages or other gathering events at the end of the year in the county.

The Heilongjiang cluster infections affected the neighboring provinces as well.

On January 5, a salesman surnamed Lin traveled from Heilongjiang to neighboring Jilin Province, bringing the virus.

He was then identified as the so-called COVID-19 "super-spreader" that has infected over 100 people in Jilin. Most of those were elderly people above 60, according to official data. 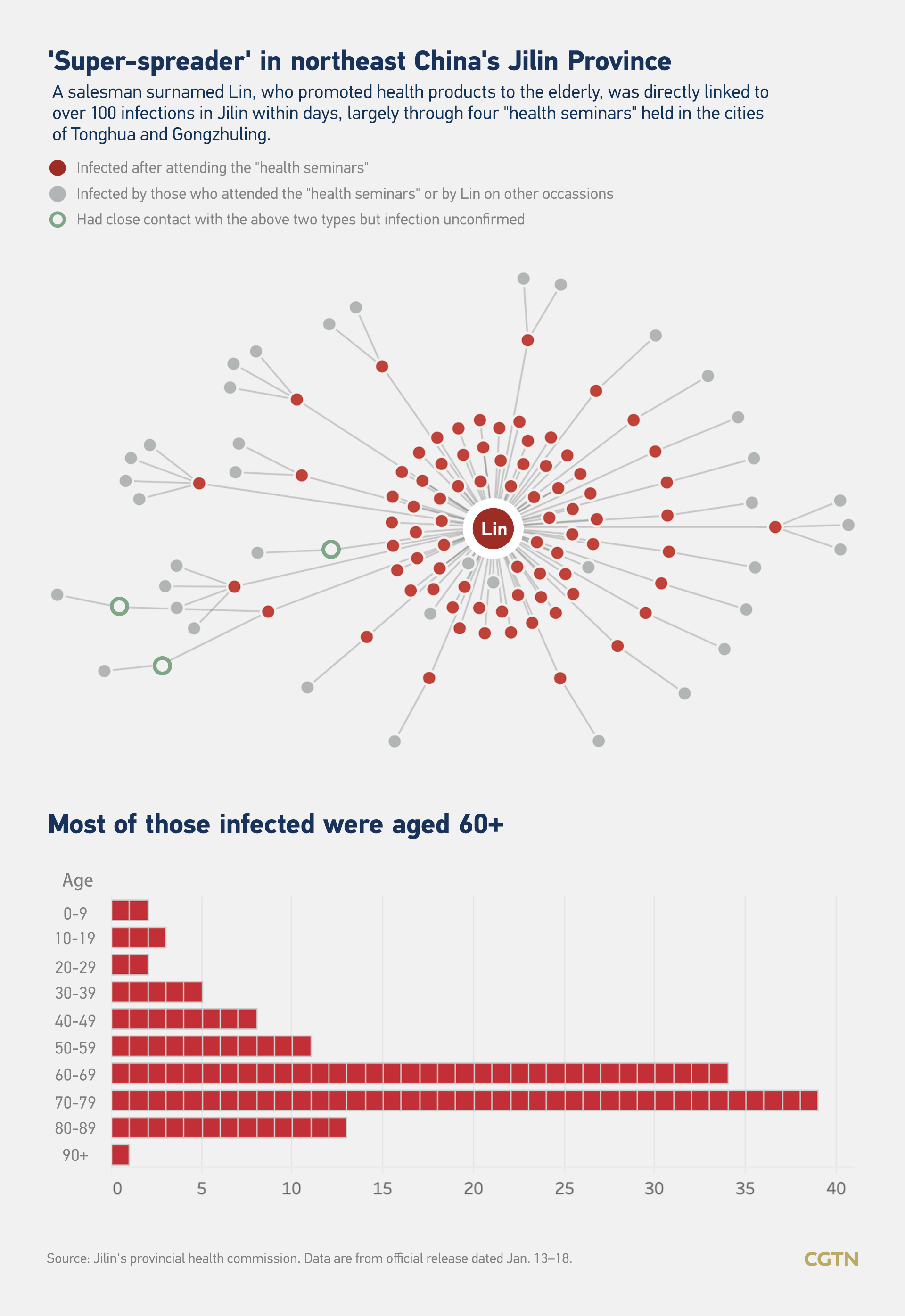 Authorities in those three provinces have rolled out a combination of measures, including home quarantine of millions of people, travel curbs, mass COVID-19 testing, and screening in a bid to contain the disease.

This was also the first time a Chinese megacity conducted repeated large-scale testing over such a short period. From January 6 to 22, over 30 million samples had been collected and tested. 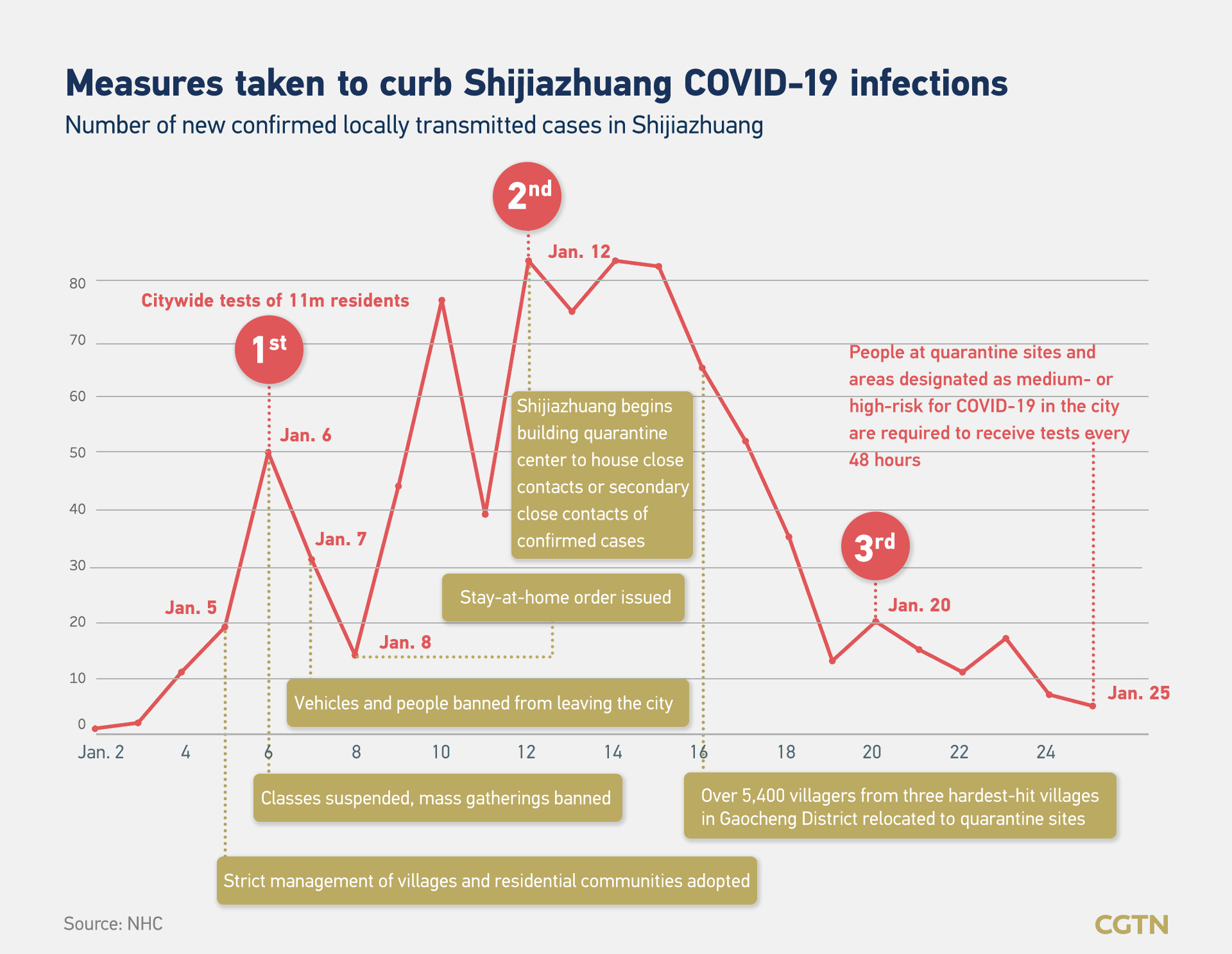 Wangkui County, the hardest-hit area in Heilongjiang Province, kicked off its fifth round of mass nucleic acid tests on Tuesday. It has been under strict lockdown since January 12.

Jilin's Tonghua, a city of about two million where the province's super spreading case was first detected, launched the third round of citywide testing on Monday.

Tonghua has been locked down since January 18, during which residents complained on social media that the lockdown had left them short of food and medicines, triggering an apology from local officials. Authorities are gearing up to ensure the supply of the city's daily necessities.

Cause of the outbreak

China has recorded an average of 14 imported cases per day since December. 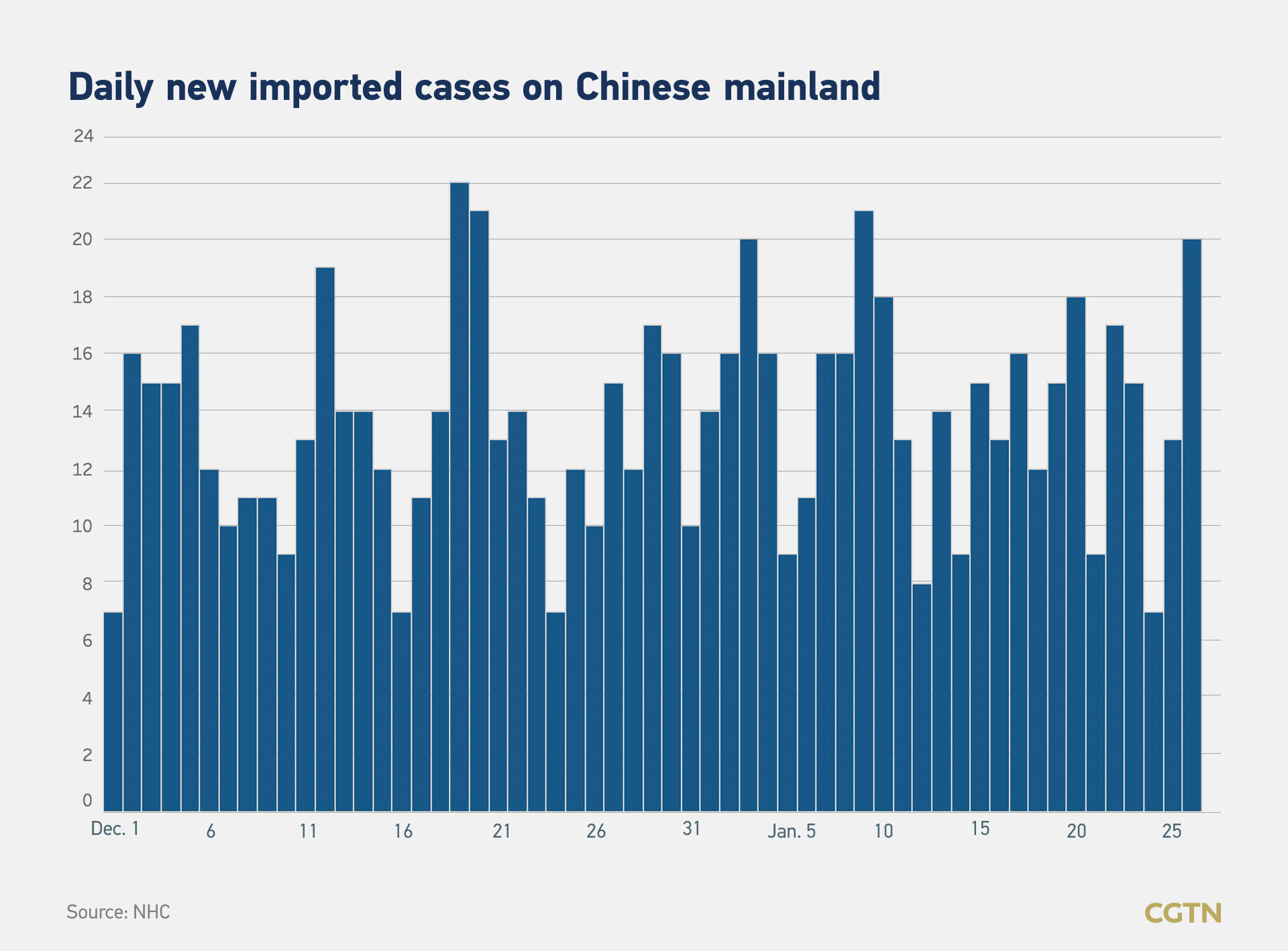 Cold chain food has also been brought to public attention frequently in China as a carrier of the virus from abroad. The first case was discovered in June when a cluster of coronavirus cases emerged in Beijing. The virus was found on a chopping board used for imported salmon at Xinfadi wholesale food market.

Graphics: How is China coping with coronavirus imported through cold chain food?

For the past few months, China has experienced sporadic outbreaks due to the international arrivals and imported food – but soon were taken under control by local authorities.

However, the uptick in local infections raised the alarm ahead of the Chinese New Year when millions travel to their home provinces. Health experts said that coming February would be the key period for China's epidemic control and prevention efforts.

The Ministry of Transport estimated that China is expected to see around 1.7 billion passenger trips, up more than 10 percent from 2020, during the 40-day Spring Festival travel rush starting from Thursday.

To cope with the heightened transmission risk that comes with mass migration, the NHC requires people to have a negative result for COVID-19 taken within seven days of returning to rural areas, as well as 14-day home quarantine upon arrival.