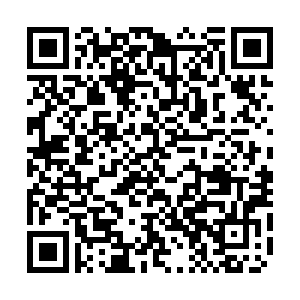 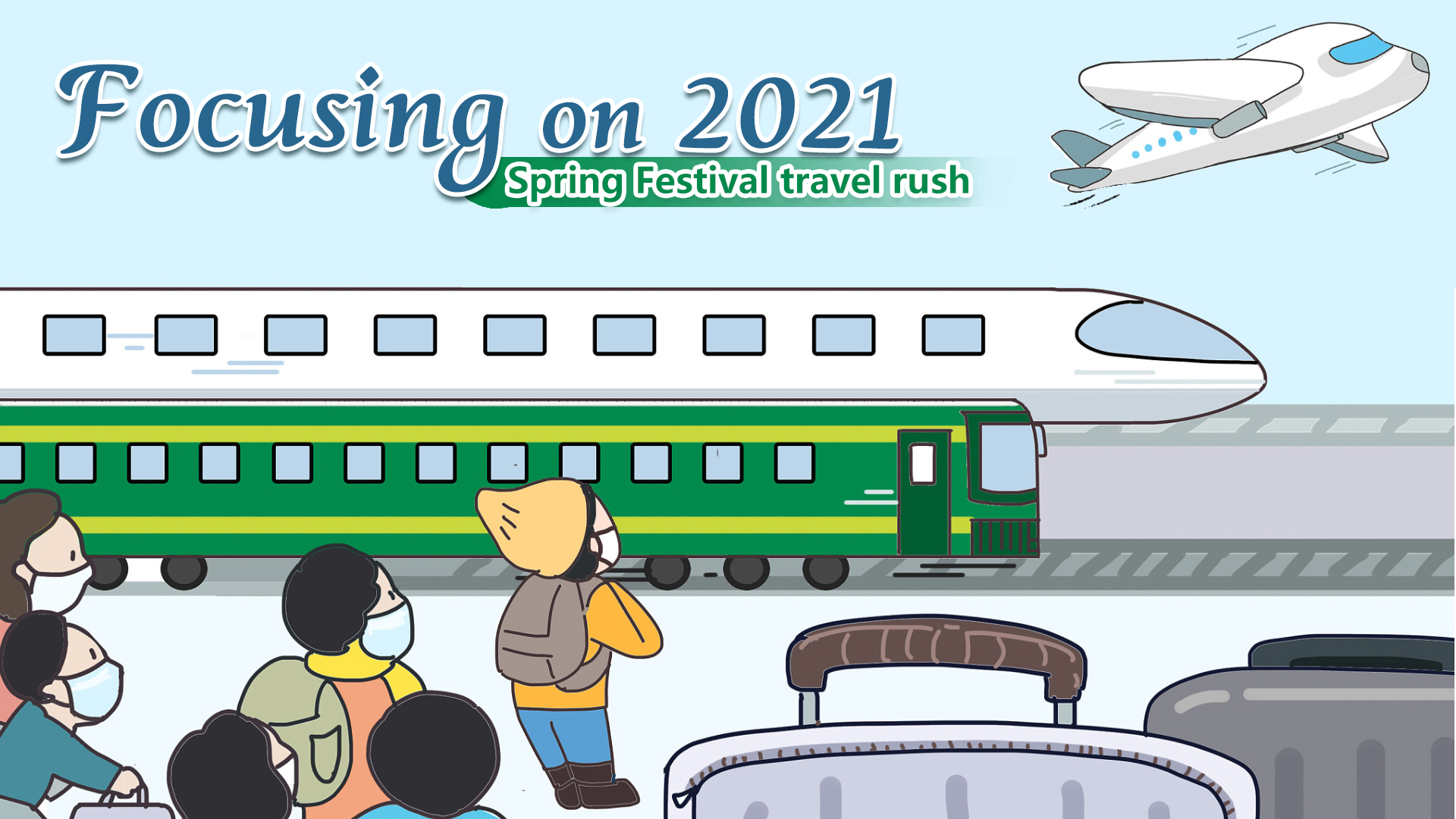 China, with a population of over 1.4 billion, on Thursday ushered in its largest annual human migration, also known as "Chunyun" in Chinese, as people set off for family reunions or vacations during the Spring Festival holiday.

The 2021 Spring Festival travel rush begins 14 days ahead of the Spring Festival, or the Lunar New Year. This year, it lasts for 40 days, spanning January 28 to March 8.

The Spring Festival is undoubtedly the biggest date on China's cultural calendar, a time for family reunions, social gatherings and big dinners. However, this year's holiday turns out to be a quiet one.

Spending the holiday where you are

With recent COVID-19 clusters across the country, China announced a series of COVID-19 safety guidelines ahead of the Spring Festival holiday season, calling on people not to make "non-essential" trips to their hometowns and spend the annual family reunion holiday in their places of work in a bid to curb the spread of the virus. 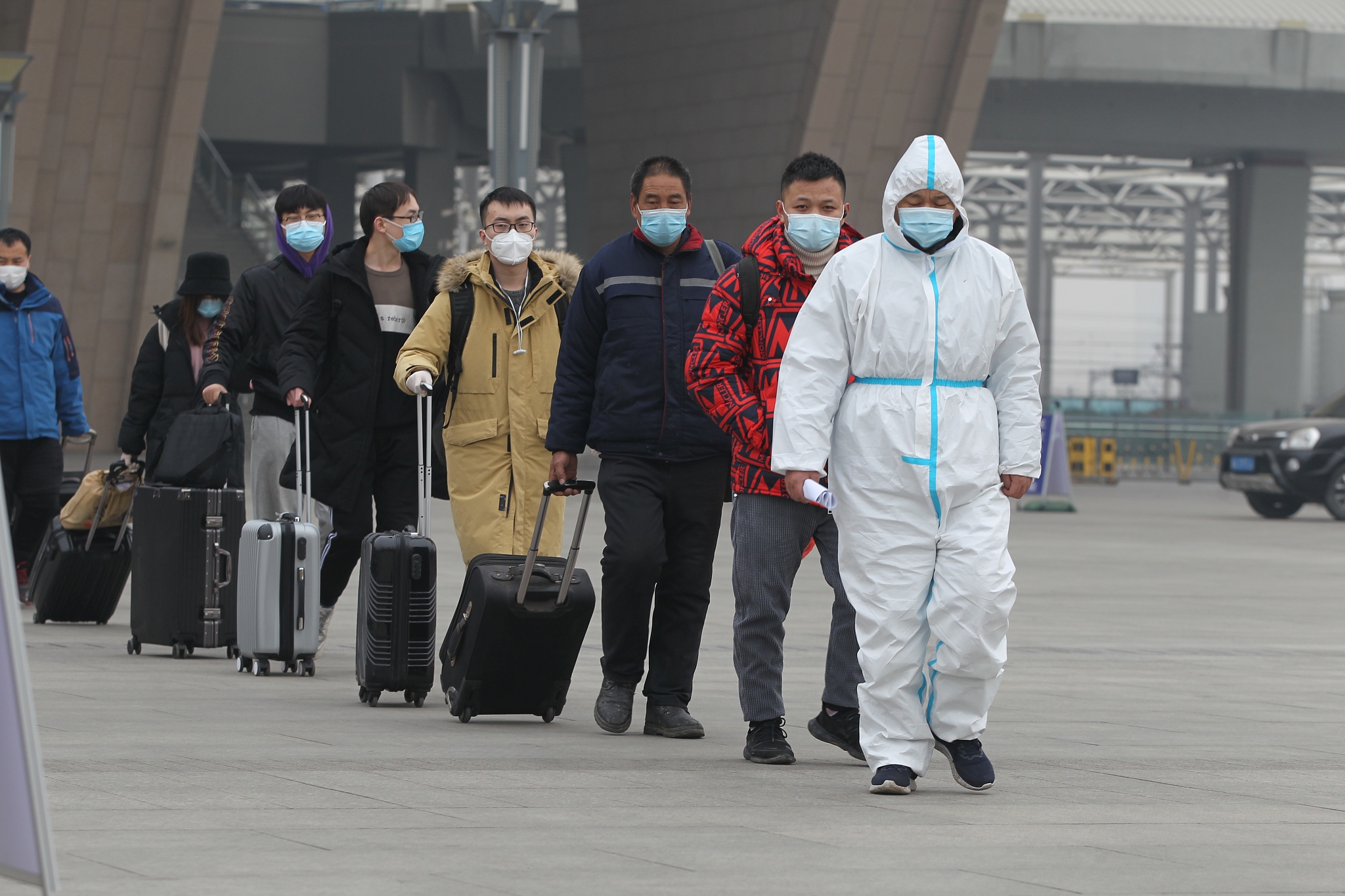 People queue up orderly with the guidance of epidemic prevention personnel. /CFP

People queue up orderly with the guidance of epidemic prevention personnel. /CFP

All residents in high-risk areas should stay in their current neighborhoods to prevent further spread, said a recent notice released by the general offices of the Communist Party of China Central Committee and the State Council. So far, at least 29 provinces across China have issued notices urging people to stay where they are and avoid traveling during the Spring Festival.

According to the notice, travelers from medium-risk areas will require permission from local epidemic prevention and control authorities. Those who lives in low-risk areas have also been advised to avoid traveling unless necessary.

In addition, authorities said those who work during the holiday should receive overtime pay or additional time off.

How railways and airlines are adapting

China is expected to see around 1.7 billion passenger trips during the Spring Festival travel rush, China's Ministry of Transport (MOT) said at a press conference on January 20. 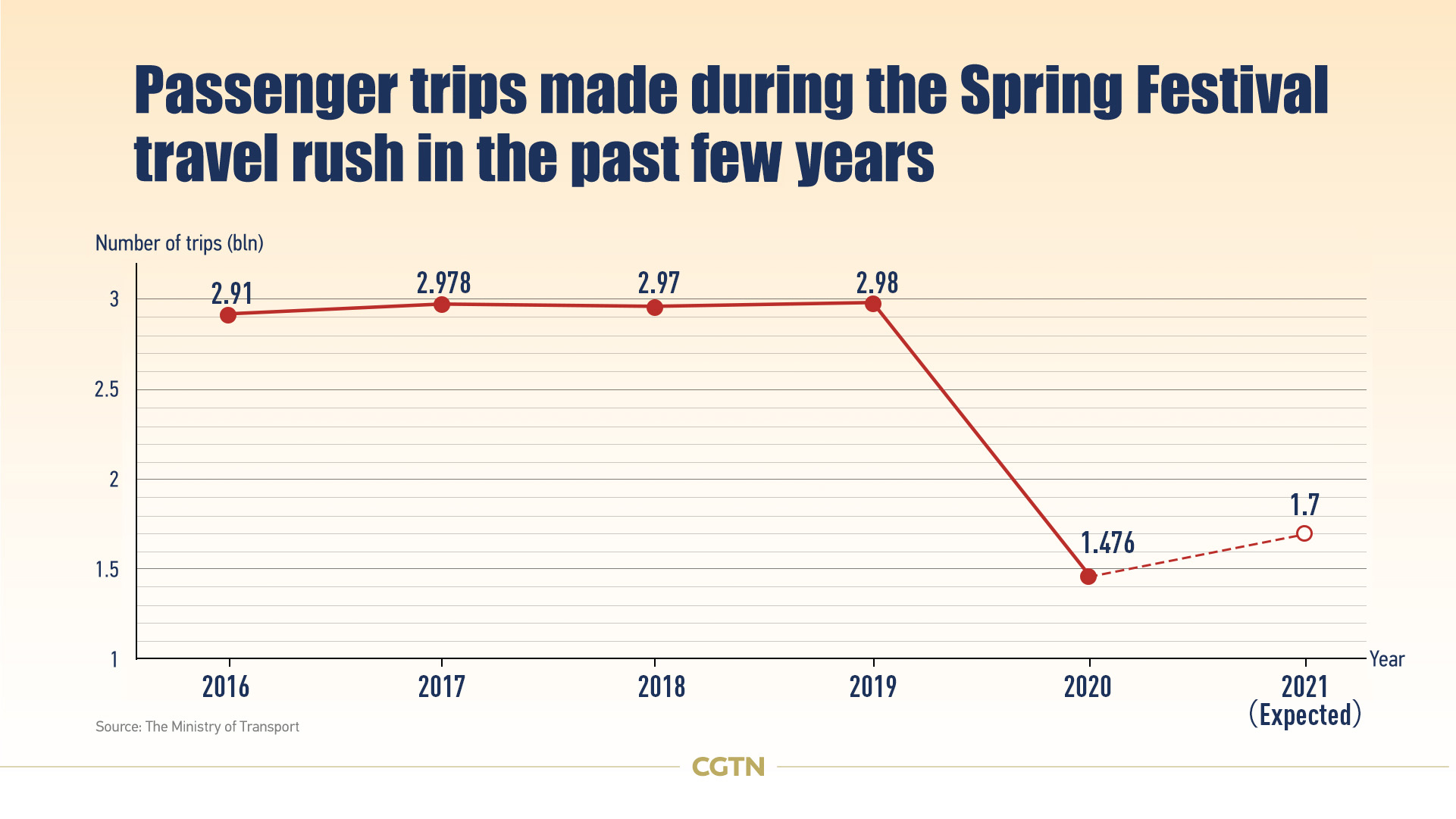 In light of the current circumstances, China has adjusted and optimized its railway operating plan to ensure smooth railway operation during the Spring Festival travel rush, according to the China State Railway Group Co., Ltd. (China Railway).

Starting on January 20, a total of 325 passenger trains and 114 freight trains have been newly added across the country to increase the railway passenger and freight capacity during the travel rush.

Given a nearly 60 percent drop year on year in train ticket bookings, China Railway has already lowered its railway trip forecast to 296 million for the travel rush. 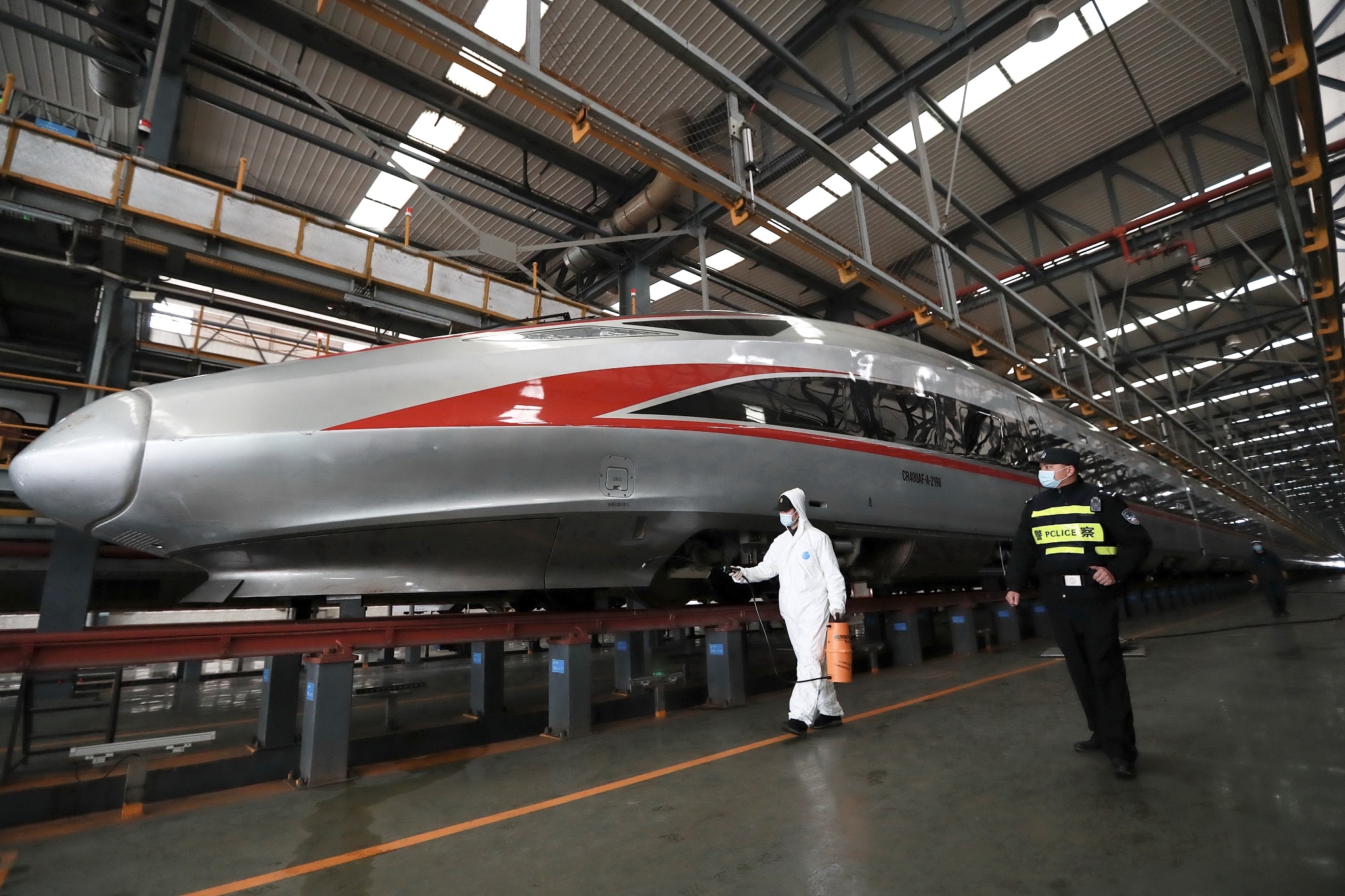 Passengers who buy plane tickets during the 40-day Spring Festival travel rush (January 28 - March 8) can receive free refunds or one reschedule, the Civil Aviation Administration of China (CAAC) said in a statement on Tuesday.

Passengers whose flight dates are from January 28 to February 3 can apply for refunds or reschedule their flights from midnight on Wednesday until before the flight takes off, and passengers with flight dates from February 4 to March 8 can apply from midnight on Wednesday until seven days before the departure of the flight, according to the statement.

Small gatherings, masks at all times and travel warnings

In response to the new COVID-19 safety guidance during the Spring Festival, governments at all levels have been encouraged to strengthen epidemic preparedness to ensure the safety of people in the holiday season. 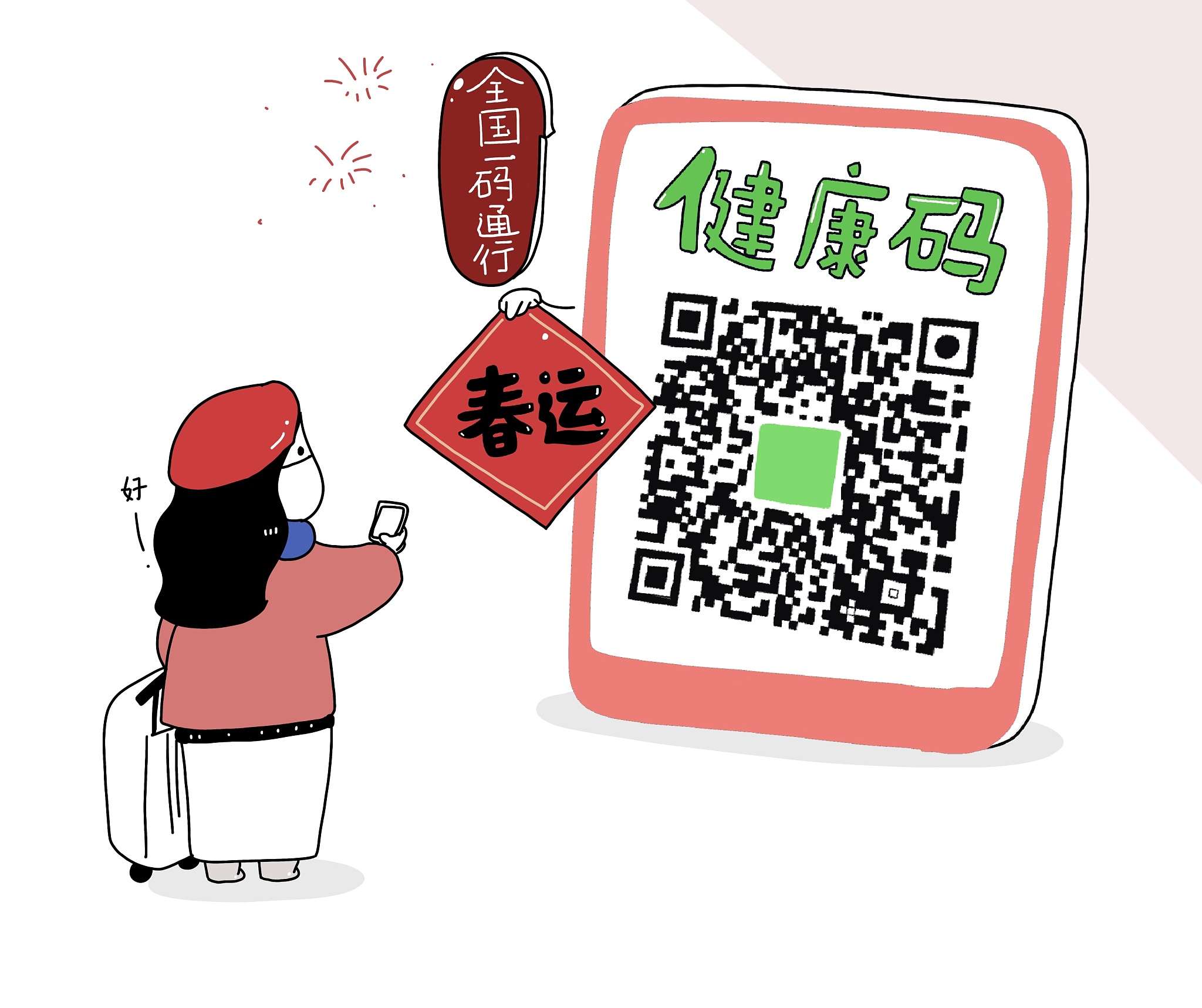 People should present a health QR code to the local village committee upon arrival. /CFP

People should present a health QR code to the local village committee upon arrival. /CFP

To cope with the heightened transmission risk that comes with mass migration, the National Health Commission is requiring people to have a negative result for COVID-19 Polymerase Chain Reaction (PCR) tests within seven days of returning to rural areas, as well as a 14-day home quarantine upon arrival.

In addition, documentation or a health QR code that contains such a test result must be presented to the local village committee upon arrival. During the 14-day quarantine period, they need to take the PCR test every seven days.

Big gatherings and celebrations including weddings, funerals, and family reunion parties are not allowed in most cities across the nation while in low-risk areas, family gatherings or parties are limited to a maximum of 10 people. Masks are required when you go out for any activities.