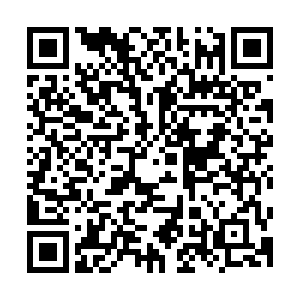 China has played an increasing role in the Middle East and North Africa (MENA) countries, a survey conducted by Arab Barometer showed, suggesting foreign policies adopted by China are more favored in the region compared with that of the U.S. under Donald Trump's administration.

The survey arrived to the conclusion after interviewing more than 6,000 people in six MENA countries including Algeria, Jordan, Lebanon, Libya, Morocco, and Tunisia to study the attitudes of ordinary citizens on how they view China and the U.S. as well as their foreign policies. 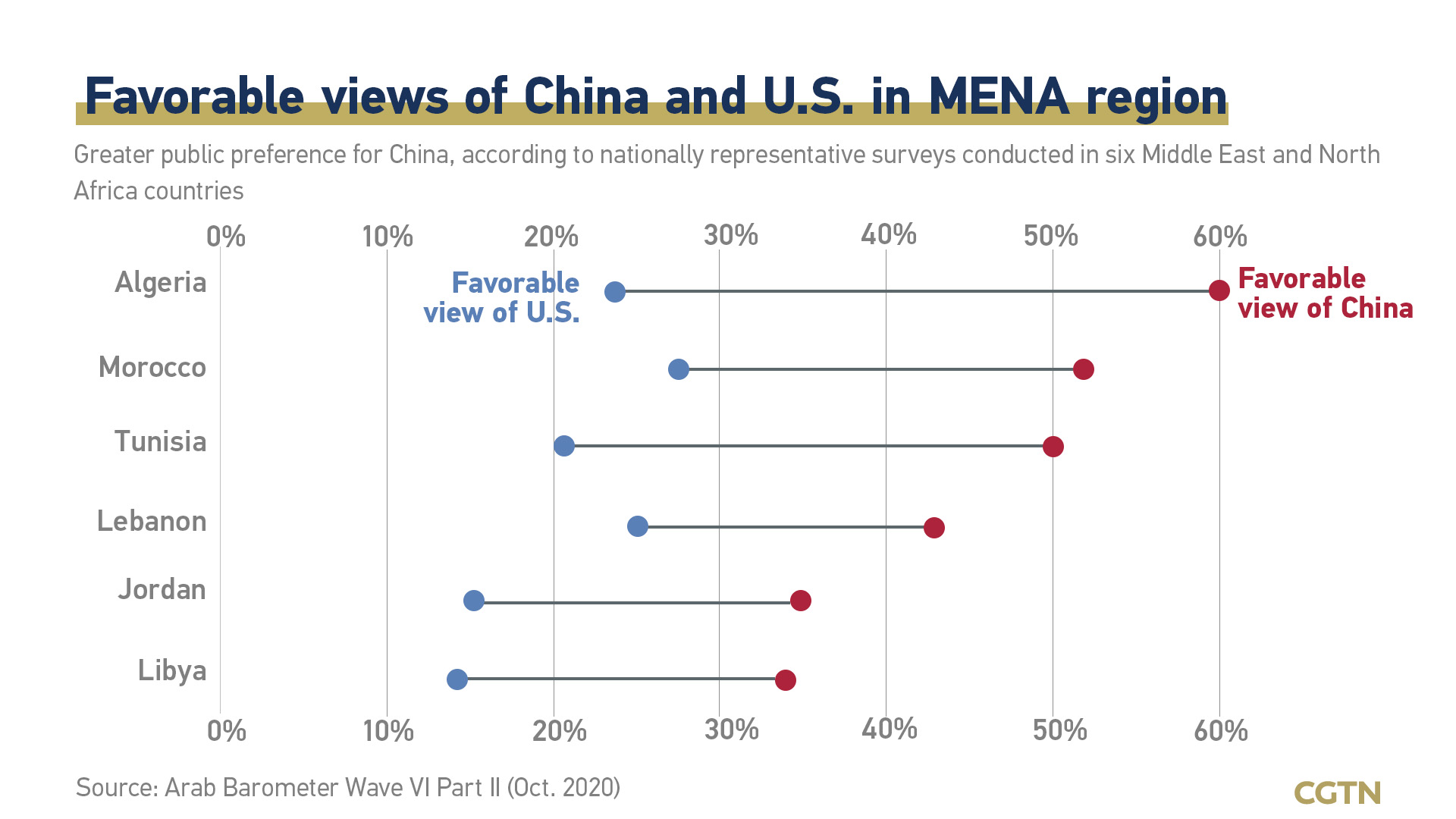 Attitudes towards China and U.S. vary significantly with a clear preference towards China, which is favored by half or more in three countries and a third or more in the rest of the countries surveyed. By comparison, fewer than a third have a favorable view of the U.S. in all six countries.

According to the survey, assistance given by the two countries during the COVID-19 outbreak may partly explain the variance.

Contrary to the U.S.'s negative attitude towards pandemic prevention and control, China has always been dedicated to international cooperation on this regard. In the past year, China provided assistance to over 150 countries and 10 international organizations.

China has assisted the Arab region with 1 million testing kits, over 18 million masks and medical teams to help countries combat the pandemic, the official report shows.

For example, in Algeria, the country which ranks first on the chart, China deployed a medical team of 20 experts with three batches donations of urgently-needed medical supplies including ventilators, testing kits and personal protection equipment during the outbreak.

Investment rather than intervention 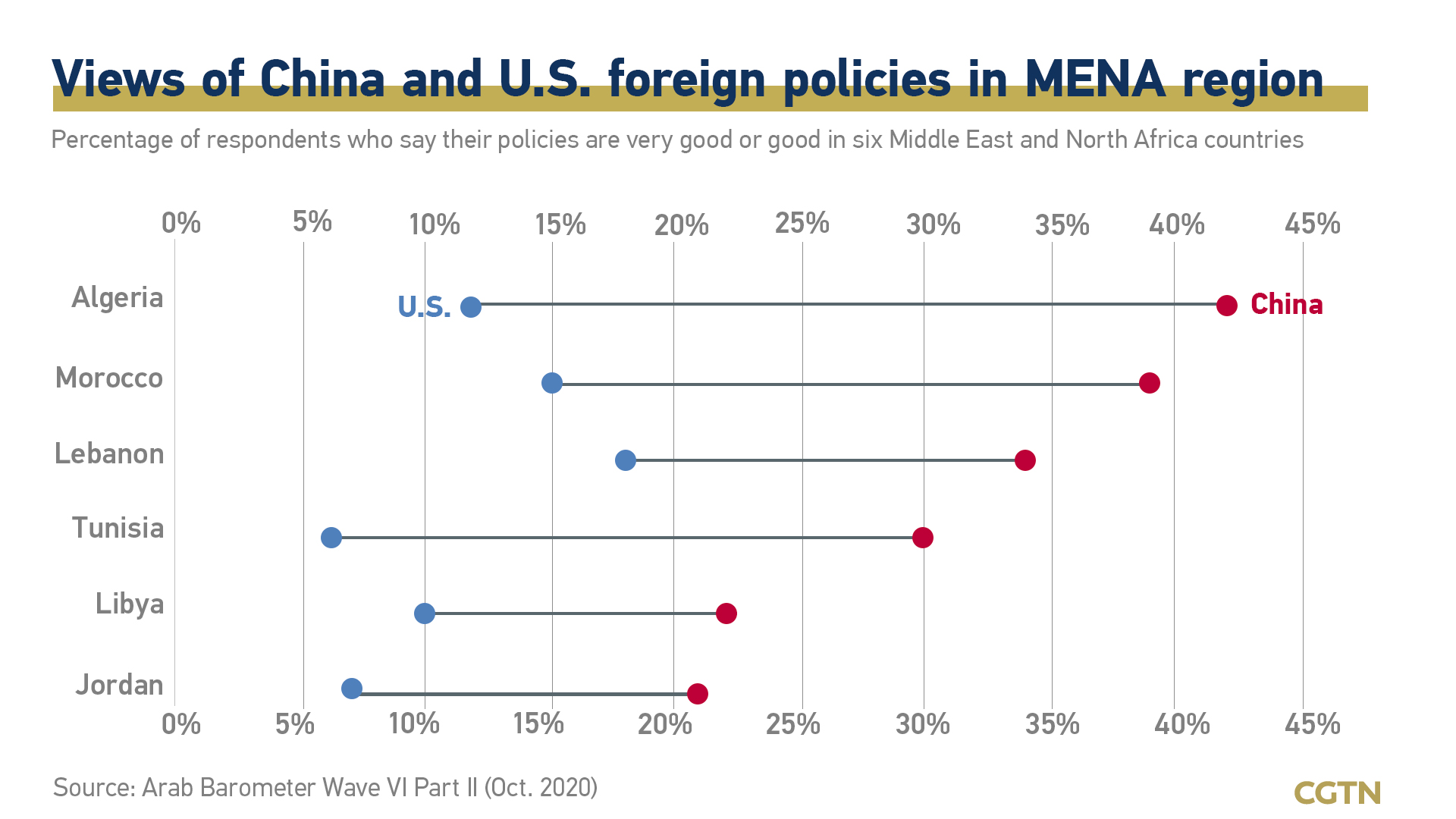 Foreign policy of both countries may be the most significant factor that defines attitudes in the MENA region. When asked about China's foreign policy, responses were largely positive, which contrast sharply with local residents' attitude towards U.S. intervention policies.

As Arab Barometer pointed out, China's involvement tends to focus more on economic areas with a feature of mutual benefit while the U.S. is more deeply engaged in political areas and often with political tendencies.

Economically, China is the biggest buyer of crude oil and gas as well as the largest investor in the MENA region. Its increasing demand for fossil energy makes China pay close attention to its ties with oil-rich states in the MENA region, while China's import of energy in return brings fortune and opportunities to the locals.

Data from the China General Administration of Customs show that in 2018, China's import of crude oil surged to 8 million barrels per day, with 41 percent of that total coming from nine countries in the Middle East. A similar trend is also seen in North Africa as it is another oil-rich region that would help diversify China's oil supply. 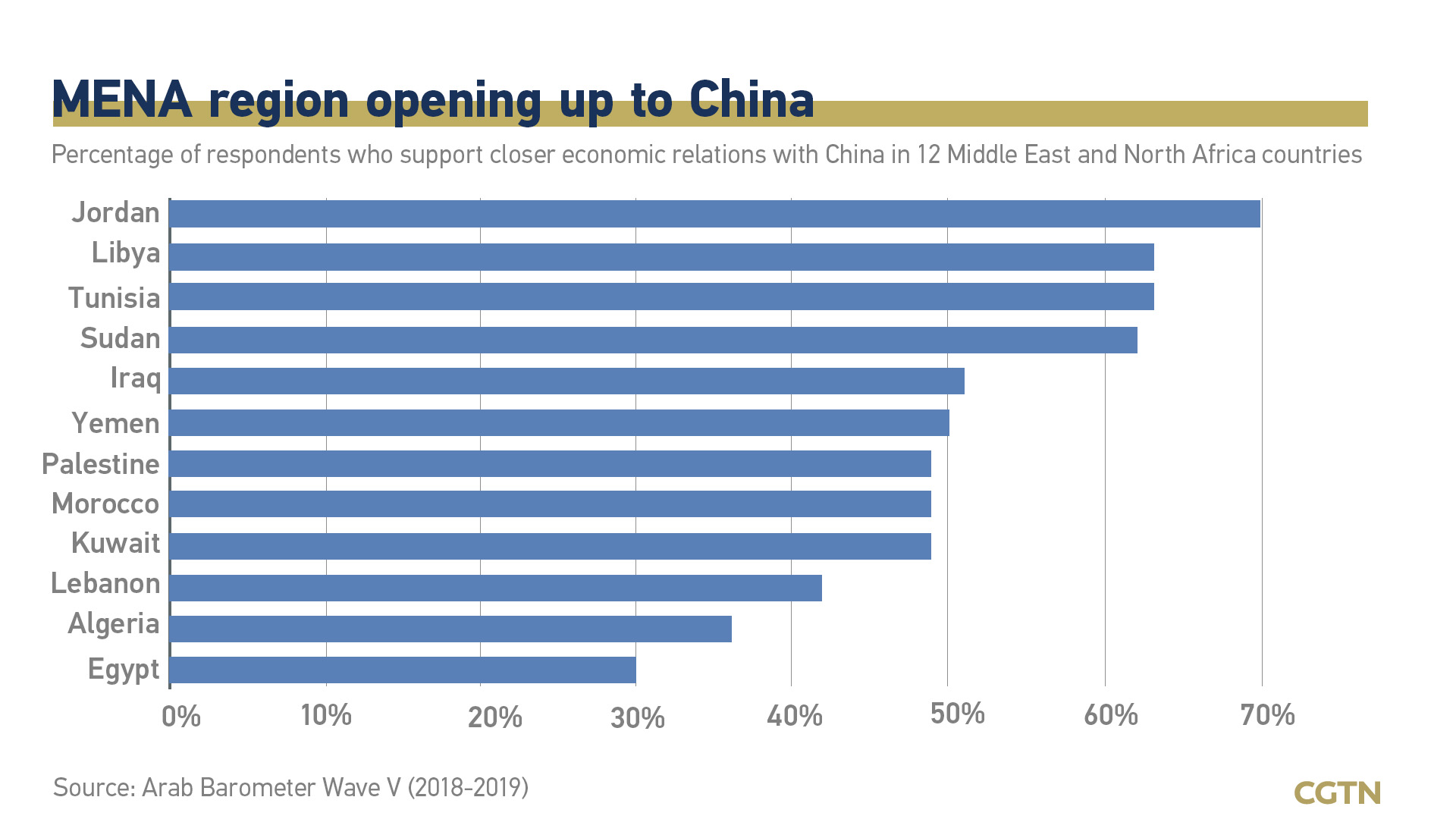 Cooperation between China and MENA countries also prevails in the construction of local infrastructure as many have been aligning their sustainable development strategies with China's Belt and Road Initiative (BRI).

Memorandums of Understanding (MoUs) on BRI cooperation have been signed between China and every state in North Africa.

As report shows, the accumulative contract value of Chinese engineering companies in Jordan reached $2.6 billion by the end of 2020, ranking first among all foreign contractors. The Attarat Oil Shale-Fired Power Plant, under construction by a Chinese engineering company, will become the country's largest power plant meeting around 15 percent of the country's need for power upon completion. 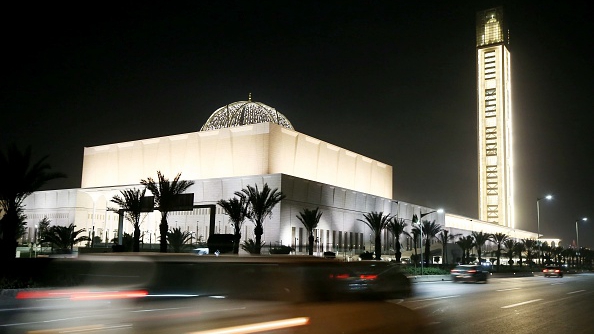 In comparison, foreign policies adopted by the U.S. are much more controversial as the survey suggests, indicating that fewer than a third have a favorable view of the U.S. in all six countries with a mainstream opinion that tends to view the U.S. more like a threat to regional peace and stability.

The U.S., under Trump's administration, signed agreements to normalize relationships between Israel and a number of other countries including the UAE, Bahrain, and Sudan. The decision, according to Arab Barometer, gained support from less than 10 percent of the people in all countries surveyed except Lebanon, of which positive views account for 20 percent of the total.

Though it's hard to give a precise number, institutes estimated that at least 1 million civilians were killed due to war. The death toll may explain why the U.S. foreign policy is not welcomed in MENA countries.

Rather than sending troops to the region, China is sending business opportunities and assistance to MENA countries. The strategy, featuring win-win cooperation and mutual respect, is perhaps the reason why China is gaining much more popularity in the region than the U.S.