Download
Is the GameStop saga a war between retail traders and Wall Street?
Facts Tell 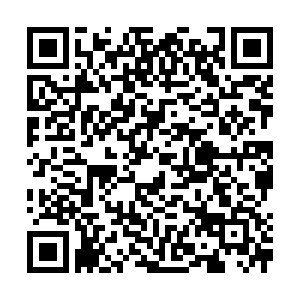 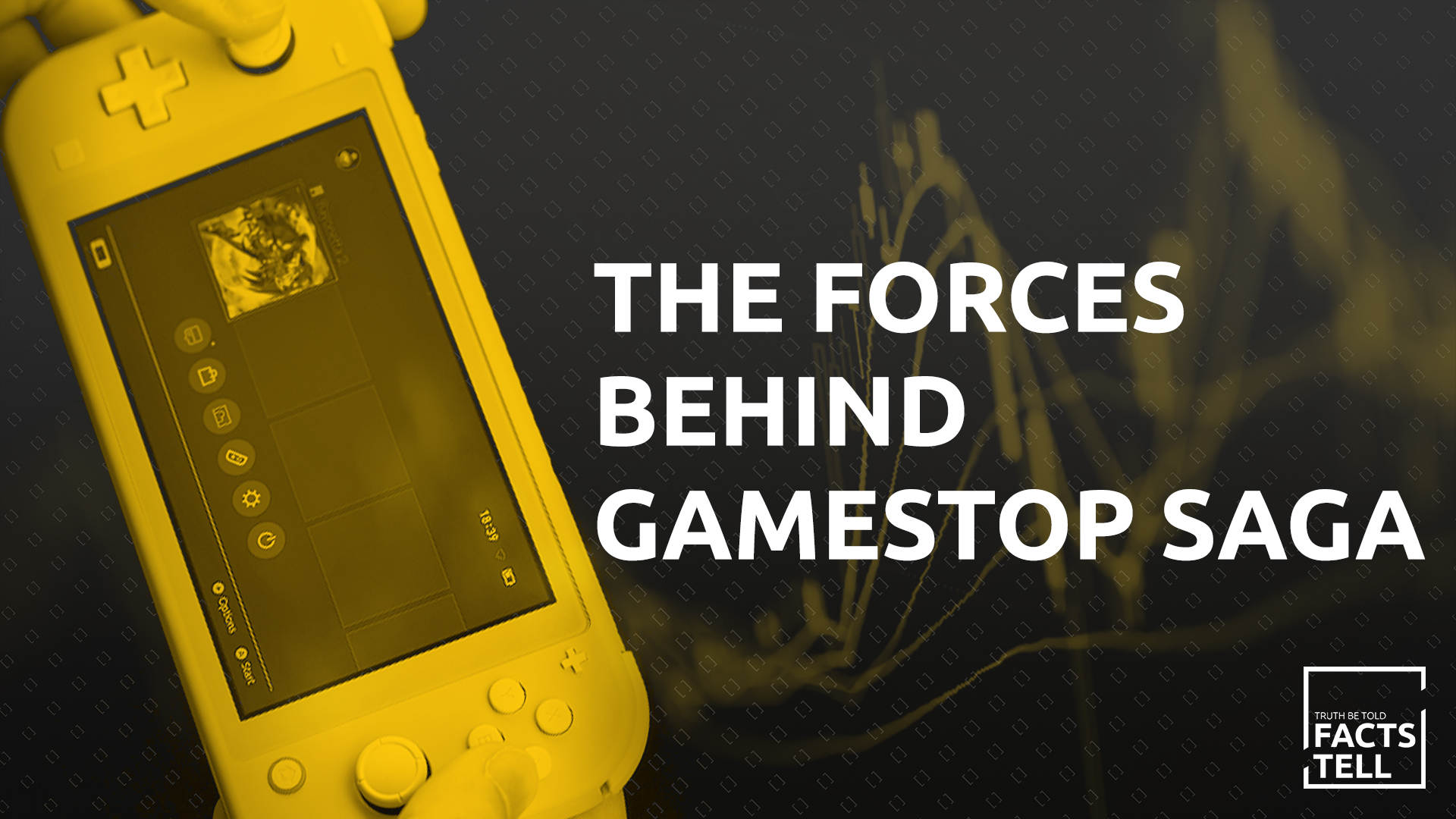 The GameStop short squeeze has been described as a battle between retail investors and Wall Street professionals, but data shows that the retail traders were not the dominant power in the GameStop's stock price surge.

In the end of January, a group of individual investors on social media platform Reddit rallied together to short squeeze the experienced Wall Street professionals, once pushing GameStop's stock price up over 400 percent in a week.

It has forced hedge funds like Citron Research and Melvin, who had wanted to short the stock, to quit the game with huge losses.

If it's really the little guys who hit the big bad short sellers, the logic behind it should be like this:

First, individual investors kept buying and buying to make the market hungry, which was exactly what they were pushing for on their Reddit posts – never sell until the price hits $1,000.

Second, they should have been the driving force of this game, meaning their money power was huge enough to manipulate the stocks.

However, according to Citadel Securities, which many retail brokerages including Robinhood route a lot of their orders through, the retail flow of it in the week of GameStop's boom shows a balanced movement. 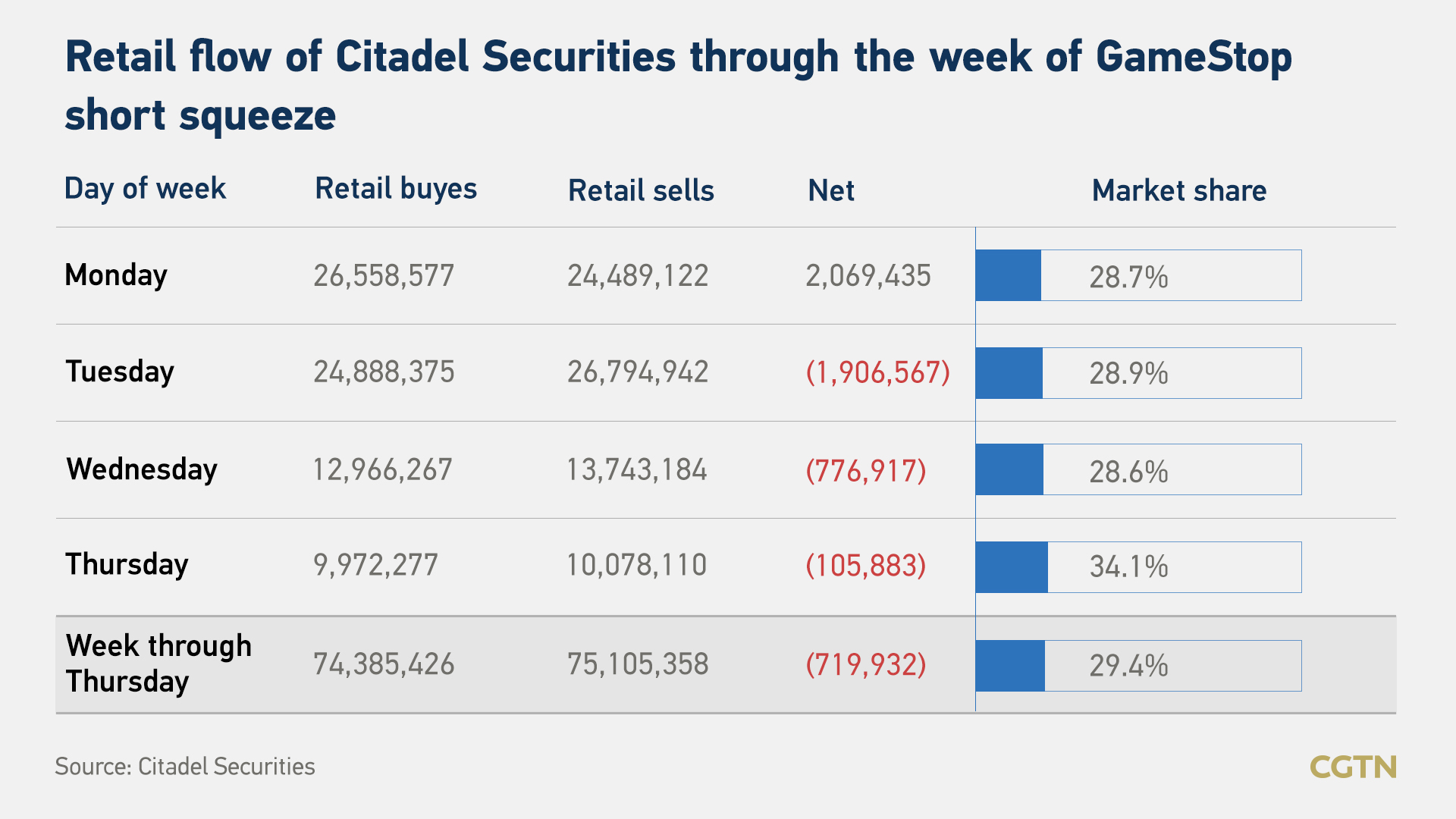 GameStop's stock price straightly climbed from January 25 to January 28, but the retail investors were net buyers only on the first day. Per Citadel Securities, the retail selling exceeded retail buying through the rest of three days, which didn't match the logic of pump-and-dump.

In addition, the market share of individual traders was not surprising. Citadel Securities' data shows that retail trade made up 29.4 percent in GameStop's four-day surging up, a small increase than the previous number.

Retail investors made up nearly 25 percent amid the COVID-driven volatility, said the head of execution services at Citadel Securities in an interview with Bloomberg TV in July last year.

Some market analysts have argued that while Reddit investors started the GameStop rally, they didn't have the money to push the stock price that high, and professionals came in to play on both sides of the trade.

"Retail investors on Reddit might have started the GameStop rally, but they're not piling into this stock now, and the price action this week is coming from professionals," said Matt Levine, a Bloomberg opinion columnist covering finance, in his recent work.

Retail investors were not able to trade that much stock as said Kourtney Gibson, the president of Loop Capital Markets, in an interview with CNBC in late January. 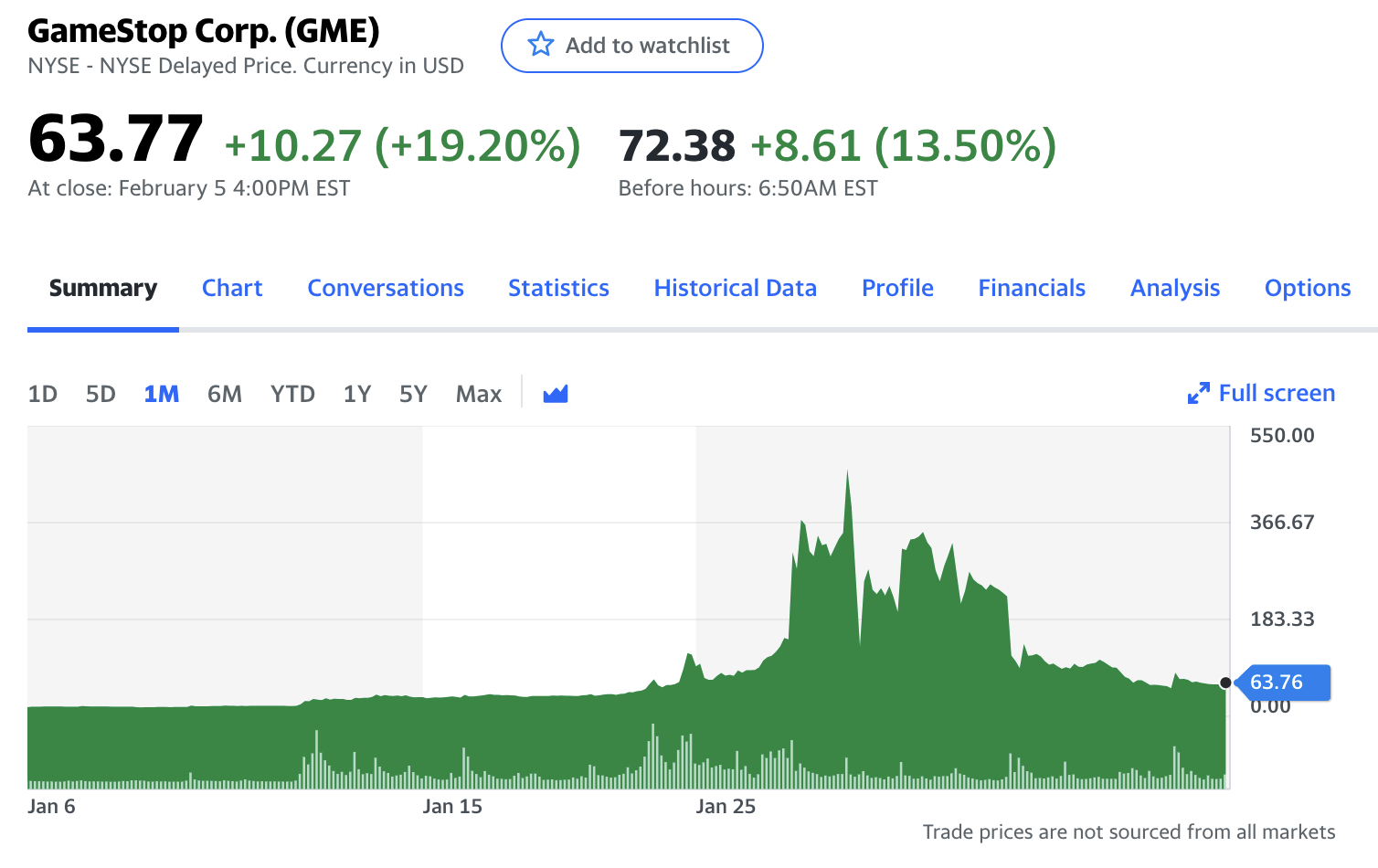 GameStop's stock price has been through a rollercoaster from January 6 to February 8. /Yahoo Finance

GameStop's stock price has been through a rollercoaster from January 6 to February 8. /Yahoo Finance

Now, the GameStop stock price has returned to what it was and regulators are looking into what happened.

It seems the game is nearly over but not quite yet. Nobody can say who was the winner, or maybe there was no winner in the first place.