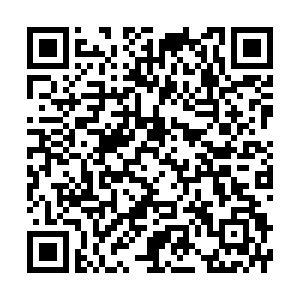 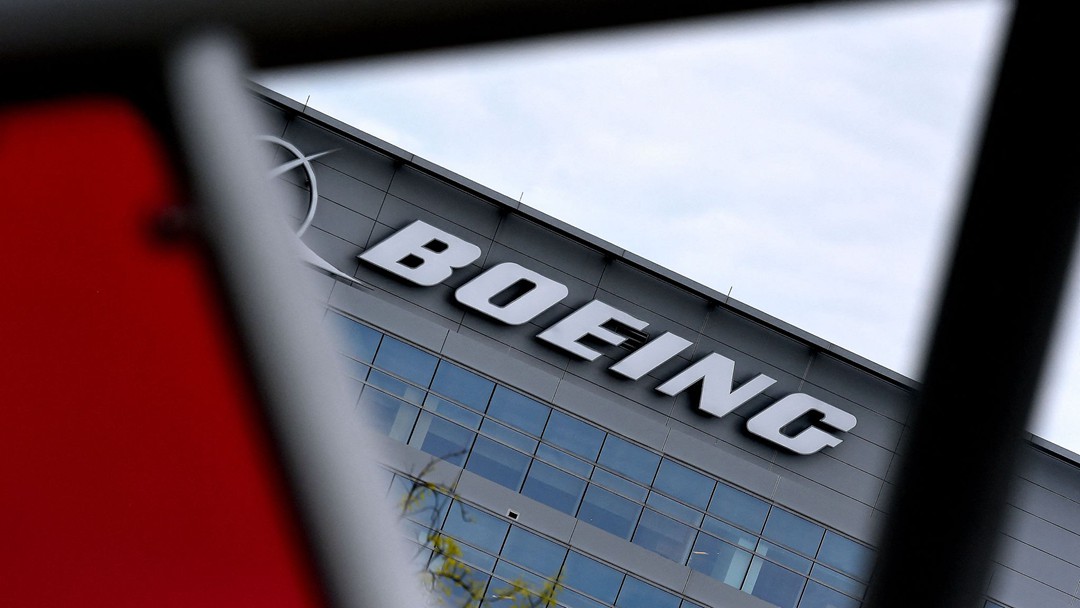 In this file photo the Boeing regional headquarters is seen amid the coronavirus pandemic, in Arlington, Virginia, the U.S., April 29, 2020. /VCG

In this file photo the Boeing regional headquarters is seen amid the coronavirus pandemic, in Arlington, Virginia, the U.S., April 29, 2020. /VCG

The incident on the flight out of Denver – which quickly returned to the airport after part of the engine caught fire and broke off – prompted United and other airlines to ground planes with the same Pratt & Whitney engine.

While no one was injured in the Denver incident, the episode is the latest setback for Boeing, which only recently resumed deliveries of the long-grounded 737 MAX following two fatal crashes of that plane.

The Civil Aviation Administration of China (CAAC) said on Monday that Chinese civil aviation fleet does not have the same type of Boeing 777-200 passenger aircraft, nor does it have a transport aircraft equipped with PW4077 engines. The CAAC will pay close attention to the incident investigation.

"It's nothing like the MAX," said Teal Group aviation analyst Richard Aboulafia. "After all these years of service it is unlikely to be a design issue with the engine, certainly it is something to do with maintenance."

The Denver incident followed a Japan Airlines 777 incident in December involving the same type of engine, as well as an engine problem in February 2018 on a United flight.

"There might be a common theme" among the three incidents "but until the investigation is complete, we don't know that," said Scott Hamilton of Leeham News, an aviation news site.

Boeing said all 128 of the 777s with Pratt & Whitney engines were grounded following Saturday's emergency landing of United flight 328 to Hawaii. 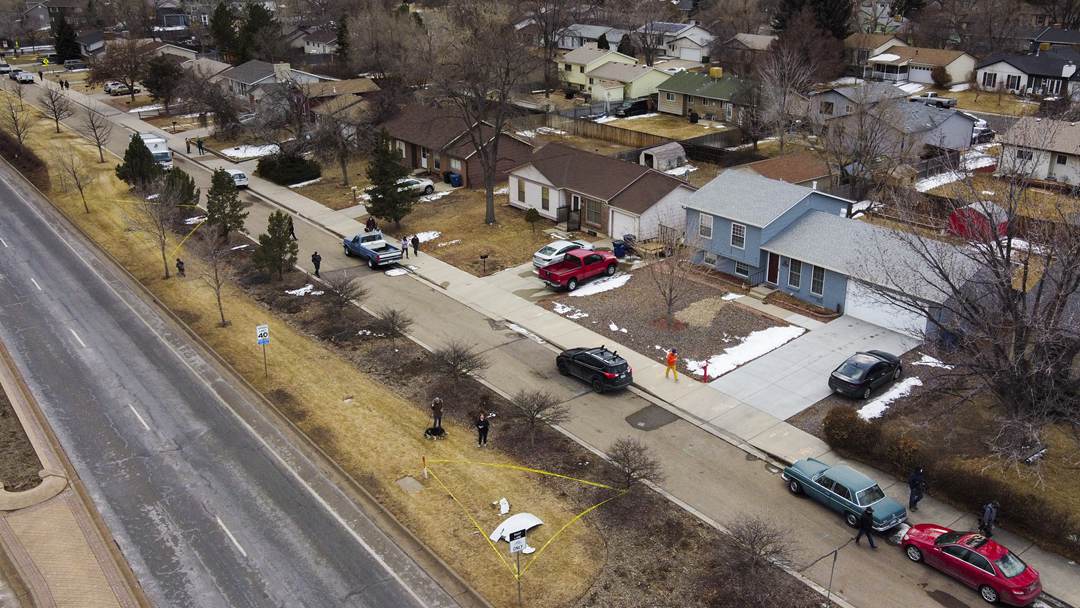 In this aerial view from a drone, a piece of an airplane engine that fell from Flight 328 sits in the median of Sheridan Boulevard on February 20, 2021 in Broomfield, Colorado. /VCG

In this aerial view from a drone, a piece of an airplane engine that fell from Flight 328 sits in the median of Sheridan Boulevard on February 20, 2021 in Broomfield, Colorado. /VCG

A video shot from inside the United aircraft – which had 231 passengers and 10 crew on board – showed the right engine ablaze and wobbling on the wing of the Boeing 777-200.

Residents in the Denver suburb of Broomfield found large pieces of the plane scattered around their community.

The U.S. Federal Aviation Administration (FAA) has ordered extra inspections after the incident.

FAA chief Steve Dickson said a preliminary safety data review pointed to a need for additional checks of the jet engine's fan blades, which were unique to the model and only used on 777 planes.

Officials from the FAA met with Pratt & Whitney and Boeing representatives on Sunday evening, he added.

The U.S. National Transportation and Safety Board (NTSB) said a preliminary investigation indicated two fan blades fractured on the No.2 engine on the plan.

"The airplane sustained minor damage," the NTSB said in a statement Sunday. "The examination and documentation of the airplane is ongoing."

Pratt & Whitney said it was cooperating with the NTSB probe and "will continue to work to ensure the safe operation of the fleet."

United said Sunday it was removing the aircraft from its schedule, "and will continue to work closely with regulators to determine any additional steps."

Japan's transport ministry earlier said it had ordered stricter inspections of engines after a Japan Airlines 777 plane flying from Haneda to Naha experienced trouble with "an engine in the same family" in December. 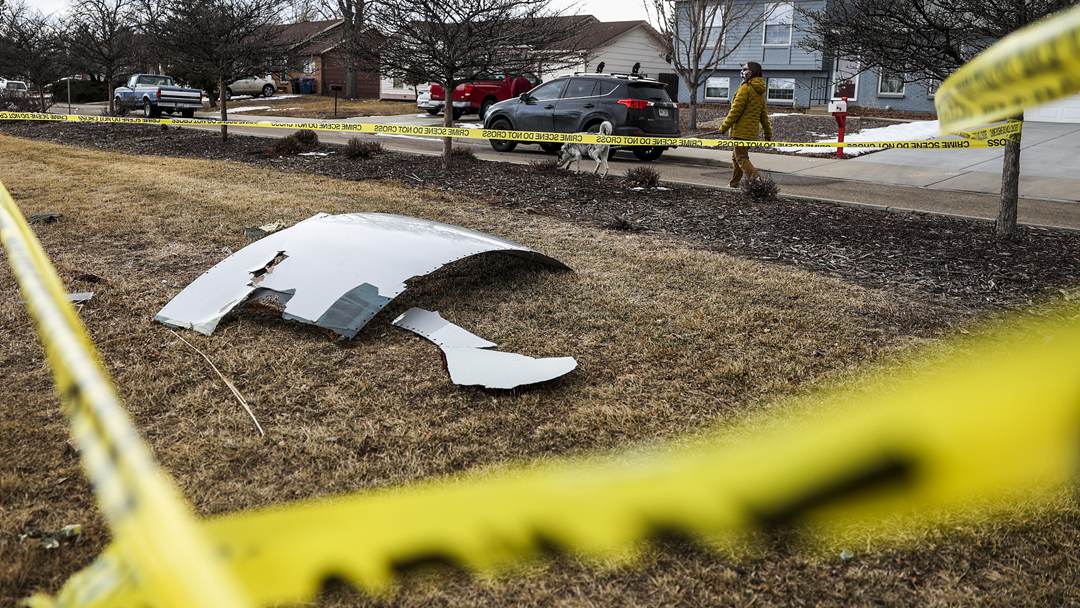 Pieces of an airplane engine from Flight 328 sit scattered in a neighborhood on February 20, 2021 in Broomfield, Colorado. /VCG

Pieces of an airplane engine from Flight 328 sit scattered in a neighborhood on February 20, 2021 in Broomfield, Colorado. /VCG

The engine failure is unwelcome news for Boeing, which also faces a fresh investigation in Holland after a Boeing 747-400 cargo plane showered a small town Meerssen with debris injuring two people – the same day as the Denver incident.

"We have started a preliminary investigation," said Luisa Hubregtse of the Dutch Safety Board, the organisation responsible for looking into aviation incidents.

"However, at this stage it's too early to draw any conclusions," she told AFP.

The MAX began returning to commercial service in late 2020, a time when airline travel remains depressed due to the coronavirus pandemic.

Boeing executives said last month they expect it will take about three years for activity to return to pre-pandemic levels.

Michel Merluzeau, an expert at consultancy AIR, agreed the latest problem did not appear to result from poor plane design by the aerospace giant.

"It's not really a problem for Boeing," he said. "It's more an issue of maintenance – how United or Pratt & Whitney is maintaining engines that have been in use for a while."

Hamilton of Leeham News said the episode "is an embarrassing headline, but as a practical issue, it will have no impact on Boeing."

Noting the weak demand for longer-service planes during COVID-19, Hamilton predicted some of the carriers could opt to retire the planes rather than return them to service.

United rose 3.5 percent to $49.70, joining other carriers in rallying after a positive note from Deutsche Bank about the industry's prospects amid improving COVID-19 trends.