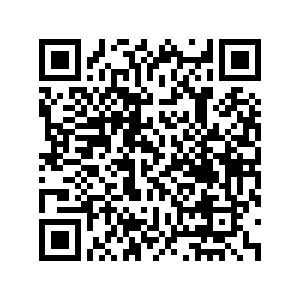 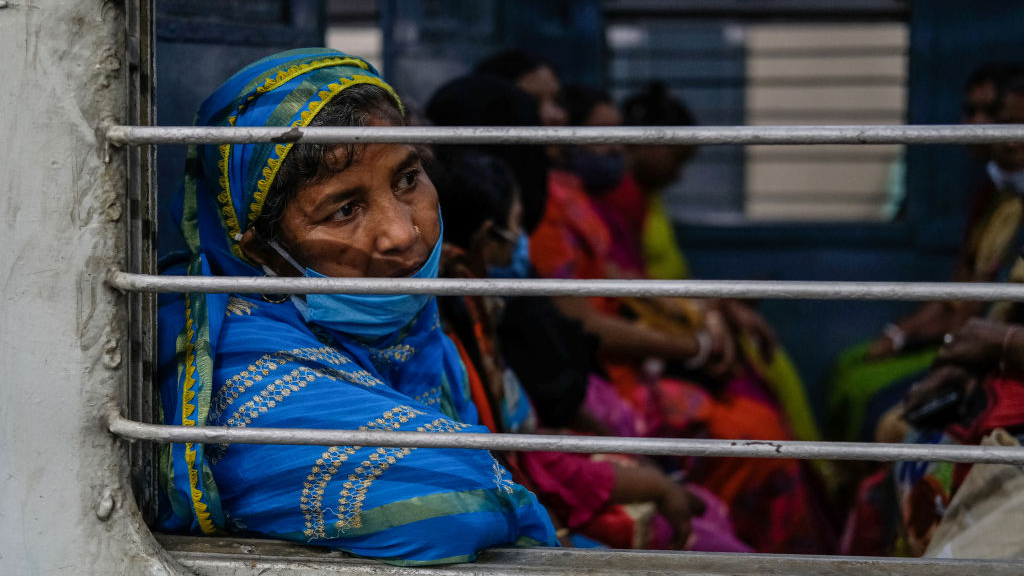 A woman with a face mask as a precaution against the spread of coronavirus on a local train, February 21, 2021. /Getty

A woman with a face mask as a precaution against the spread of coronavirus on a local train, February 21, 2021. /Getty

Editor's note: Sema Sgaier is an adjunct assistant professor at the Harvard T.H. Chan School of Public Health, Co-Founder and CEO of Surgo Ventures, and Prashant Yadav is a Senior Fellow at the Center for Global Development, an affiliate professor at INSEAD and a lecturer at Harvard Medical School. The article reflects the author's opinions, and not necessarily the views of CGTN.

As the world enters the second year of the coronavirus pandemic, vaccination has moved front and center in policymakers' responses. But while vaccines offer the surest way out of the crisis, countries are approaching them in different ways. Some are racing to vaccinate their populations, while others await longer-term efficacy data before beginning. Still other countries find themselves in a long line to receive or purchase desperately needed doses.

Many have noted the rapid rate of Israel's vaccination drive, the ambition of the United Kingdom, which was the first country to approve a COVID-19 vaccine for emergency use, and the stumbles to get supplies distributed in the United States and the European Union. But for those seeking lessons on how to protect a population through vaccination, there's another country to watch: India.

With 1.3 billion people, and an estimated 11 million cases of COVID-19 to date, India faces a seemingly mammoth vaccination challenge. But the government recently announced a plan to vaccinate around 300 million people by early August. And, judging by the country's preparations and actions so far, it may be well equipped to handle the task.

That's because India can meet the challenges of scale with massive manufacturing capacity, a strong public-health infrastructure with experience in vaccine delivery, an army of frontline workers, and meticulous planning. Add to that some innovative digital tracking, and the results could put the country in an enviable position by later this year.

Frontline health workers are central players in India's vaccination rollout, and the first in line to receive the shots. The drive to vaccinate around 30 million frontline and other health workers began on January 16, and in the first 34 days, India achieved ten million vaccinations. The U.S. took 31 days to vaccinate the same number after it authorized vaccines.

After India's health workers are vaccinated, frontline workers and people aged over 50 – and younger people with serious health conditions – will be next in line. That's a further 260 million people that the government plans to vaccinate in under seven months.

India has the capacity to manufacture all its COVID-19 vaccines domestically. The Serum Institute of India, the world's largest vaccine producer, has boosted its capacity in order to manufacture one billion doses of the AstraZeneca-Oxford vaccine (known locally as Covishield), while Bharat Biotech will produce the government-backed Covaxin shot. This should be enough to vaccinate the country's priority groups this year. And, because the vaccines produced domestically are priced to be the cheapest in the world, India has already supplied vaccines worth $47 million to 13 countries.

India will rely heavily on its public-health infrastructure to scale up its vaccination drive. Three thousand COVID-19 vaccination centers have been established across the country, along with 27,000 cold chain points to keep supplies cool en route to and at their destinations. About 150,000 staff people in 700 districts have been specially trained to administer the vaccines.

India already runs the world's largest public-health immunization programs, targeting 27 million infants and 29 million pregnant women each year. Since a national campaign to vaccinate children against measles and rubella began four years ago, several states have achieved coverage rates of over 90 percent. The COVID-19 vaccination push is certainly ambitious, but its scale is not fundamentally different.

As some countries – including the U.S. – have found, multi-level government systems can hamper speedy vaccine rollout if there is inadequate information flow, lack of clarity on decision-making authority between the various levels, and diffuse accountability. India proactively addressed this issue when planning the deployment of COVID-19 vaccines by establishing a well-defined governance structure between the central government, state government, district government, and local administrative blocks. Roles and responsibilities for each level are clearly defined, allowing a nationally coordinated response. 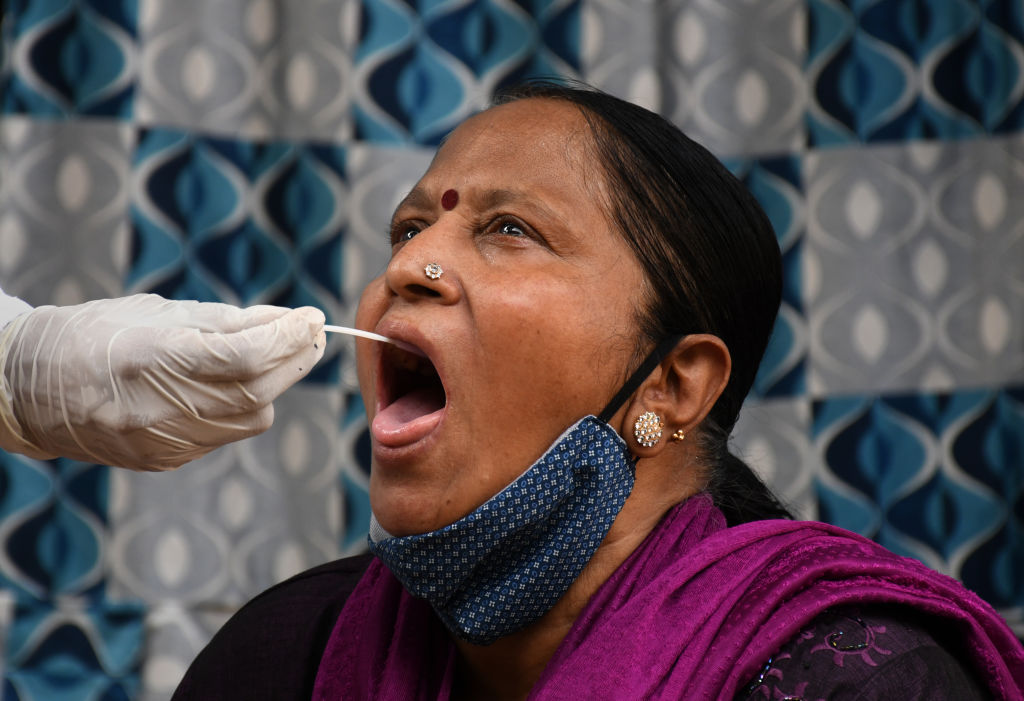 A healthcare worker collects a swab sample from a woman residing in a slum colony of India, February 23, 2021. /Getty

A healthcare worker collects a swab sample from a woman residing in a slum colony of India, February 23, 2021. /Getty

In addition, India is using technology to streamline tracking and accountability. In record time, the authorities have created the dedicated Co-WIN system to track procurement and distribution of vaccine supplies, and allow people to pre-register for vaccinations. Co-WIN builds on Aadhaar, the country's nationwide digital ID system. On the supply side, it uses e-VIN, the national vaccine information system. Bringing them together has been the key to making the system work, and initial glitches have been quickly fixed. Citizens can receive a text message informing them when and where to get the vaccine, and will receive a unique QR code certificate after they've received the second dose.

Although the prospects look good, India must still overcome significant hurdles. Building a comprehensive and accurate database of individuals with comorbidities, in order to prioritize them for vaccination, remains a huge challenge.

And, as in other countries, there are worrying levels of vaccine hesitancy. India's impressive COVID-19 immunization figures in the first weeks could have been even higher, but some medical staff have been reluctant to get the shot, especially because the locally developed Covaxin received emergency authorization before all the trial data on its efficacy had been reviewed. The government will need good communication campaigns to persuade older people and those with medical conditions that the vaccines are safe.

India's experience holds at least three lessons for other countries. First, they should make the most of their strengths. Not every country can develop or manufacture its own vaccines. But almost all can draw upon committed frontline workers, public-health infrastructure, or prior experience confronting epidemics or holding immunization drives.

Second, prioritizing vaccine access and tracking rollout should be built into the vaccination drive from the start. Digging deep into the data to allocate vaccines most effectively may require building upon existing data systems, or using new tools, such as the COVID-19 Vaccine Allocation Planner for the U.S., and the Vaccine Coverage Index, which highlights which geographies are likely to have problems achieving high levels of COVID-19 vaccine coverage and why.

Finally, vaccine hesitancy will require a tailored response in each country. Policymakers and public-health experts must devise effective strategies to reassure people that vaccination is safe – and the only road out of the pandemic and toward recovery.