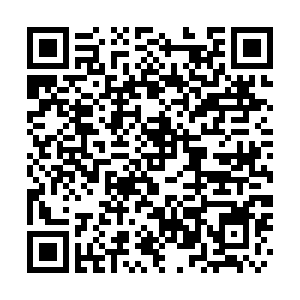 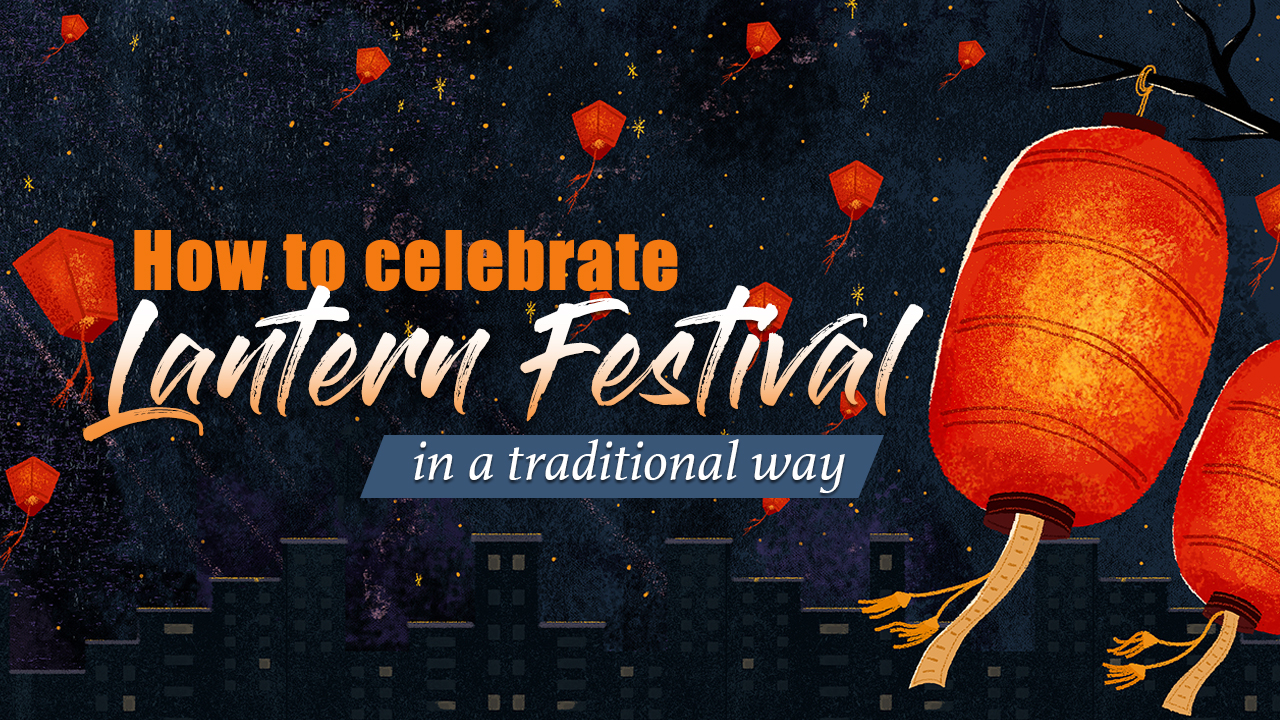 The annual festive season in China is about to end, but not without a grand finale. The Lantern Festival, also known as Yuanxiao Festival, concludes the Chinese New Year celebrations. It falls on the 15th day of the first month on the Chinese lunar calendar. This year, the date is observed on Friday, February 26.

With a history for more than 2,000 years, the Lantern Festival is a traditional folk festival as well as an important occasion for family reunions. On that day, families get together, savor delicious food and enjoy festive folk art performances. In 2008, the Lantern Festival was listed as a National Intangible Cultural Heritage.

Here's your guide to celebrating the occasion like a traditionalist.

As so named, you can't spell Lantern Festival without lanterns. Rituals and customs vary in different parts of China, but lantern always plays a crucial role. Lantern shows are also commonly held, dazzling revelers with stunning displays of light and art.

The paper lamps represent wishes for a bright future. Usually in red, an auspicious color in Chinese culture, the lanterns in ancient times were fairly simple, but nowadays with new technologies and electricity, they have come in all shapes and sizes, such as auspicious characters and mythical animals. 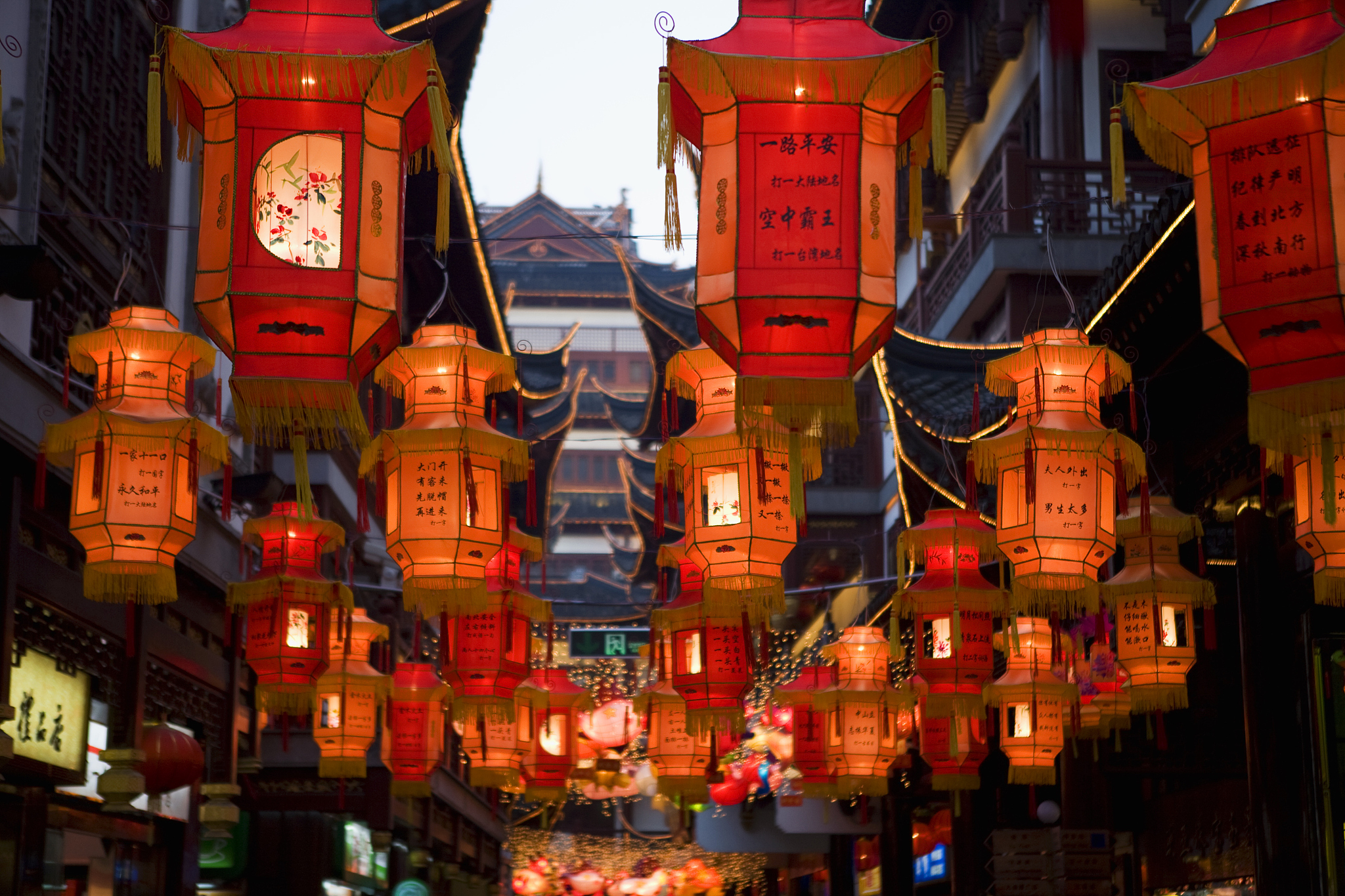 The lanterns can symbolize people letting go of their past selves and getting new ones, which they will let go of the next year.

As the capital of 13 ancient China dynasties, Xi'an City in northwestern Shaanxi Province has combined its history well with the lantern shows. If you are a big fan of Chinese traditional lantern culture, the Tang paradise is a must-see.

How about a little guessing game? Riddles are often attached to the lanterns, challenging curious minds to test their knowledge. The riddles can be inspired by idioms, literature, folklore references, and a lot more. 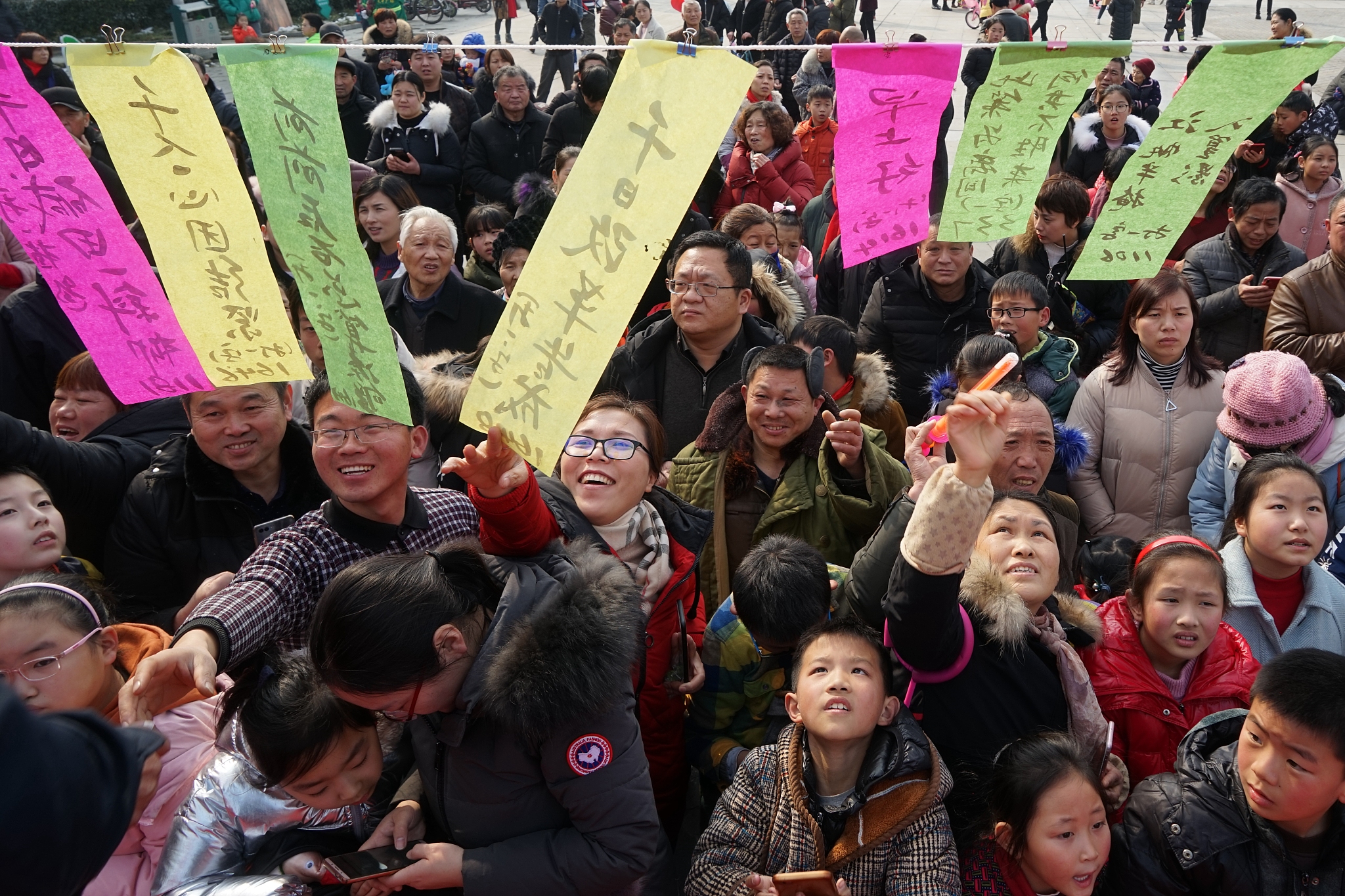 The tradition emerged during the Song Dynasty (960-1279), when scholars would quiz the crowd using slips of paper. Lantern owners would write riddles on a piece of paper and post them on the lanterns in advance. Those able to solve the puzzle can claim a small prize from the lantern owner.

At present, the activity continues to be a fun way to socialize and stimulate the brain.

See a dragon in action

Dragon in Chinese culture is a symbol of good luck, great power and nobility. The dragon dance was popularized during the Song Dynasty (960-1276) as a celebratory activity and to pray for rain, and now it is an integral part of any celebration including the Lantern Festival.

Dancers use sticks to hold a dragon figure high, and imitate its serpentine movements. The longer the dragon in the dance, the more luck it will bring to people. 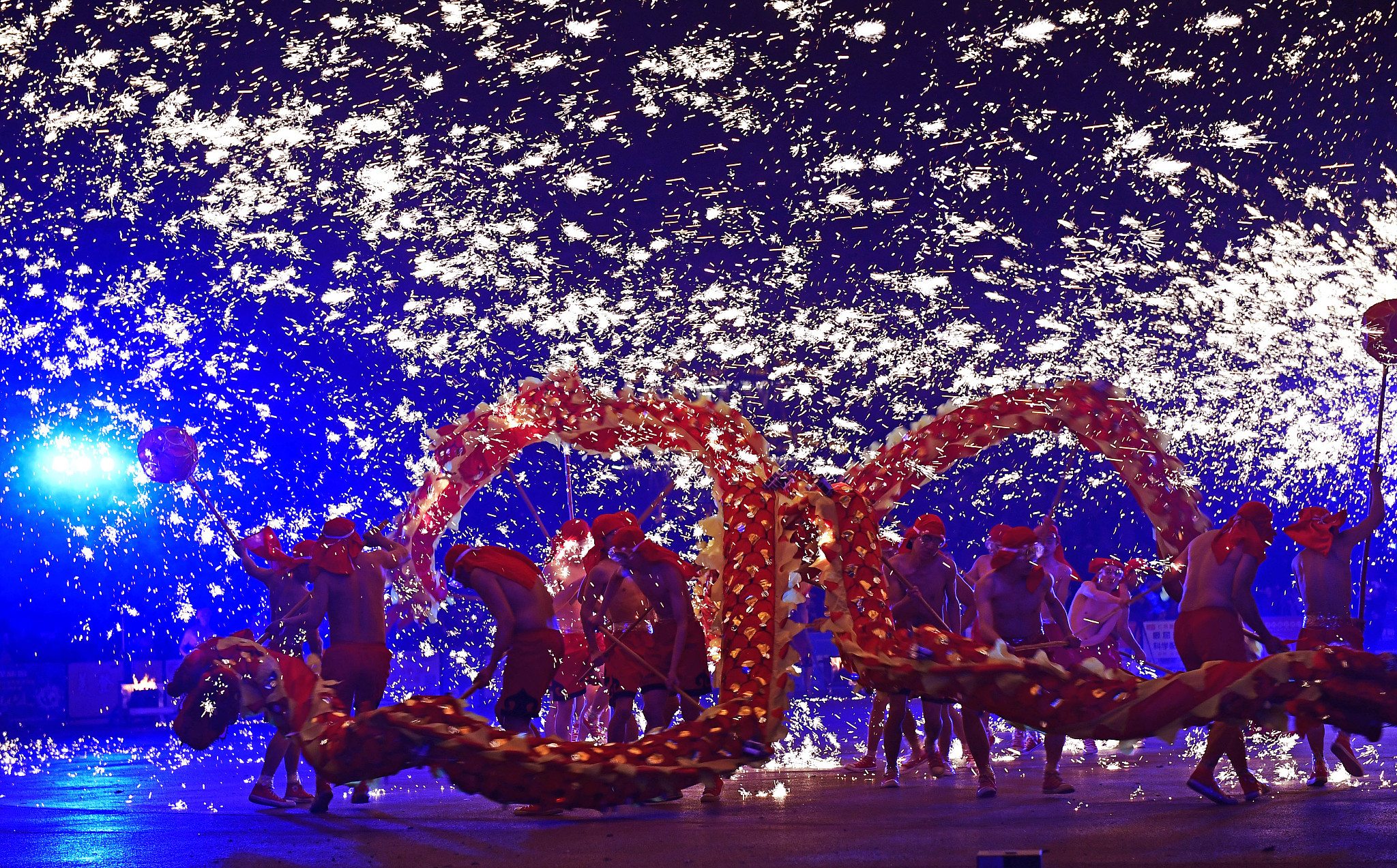 When taking about the dragon dance, you can't miss the Tongliang fire dragon dance. Tongliang District in southwest China's Chongqing Municipality is home to the dragon dance in China. Since the Ming Dynasty (1368-1644), the region has always been illuminated by dragon dance parades and beautiful lantern lights during some important Chinese festivals.

Tongliang fire dragon dance has been dubbed one of the top ten cultural symbols in Chongqing. During the show, dancers perform in a shower of molten iron that sparkled like fireworks, creating a spectacular and fiery scene.

Watch out for the lions

It's common to see lion statues guarding the fronts of buildings in China. But during the Lantern Festival, the lions roar to life.

The lion dance is all about good vibes and good wishes in the Chinese New Year. The performance dates back to the Three Kingdoms Period (220–280). 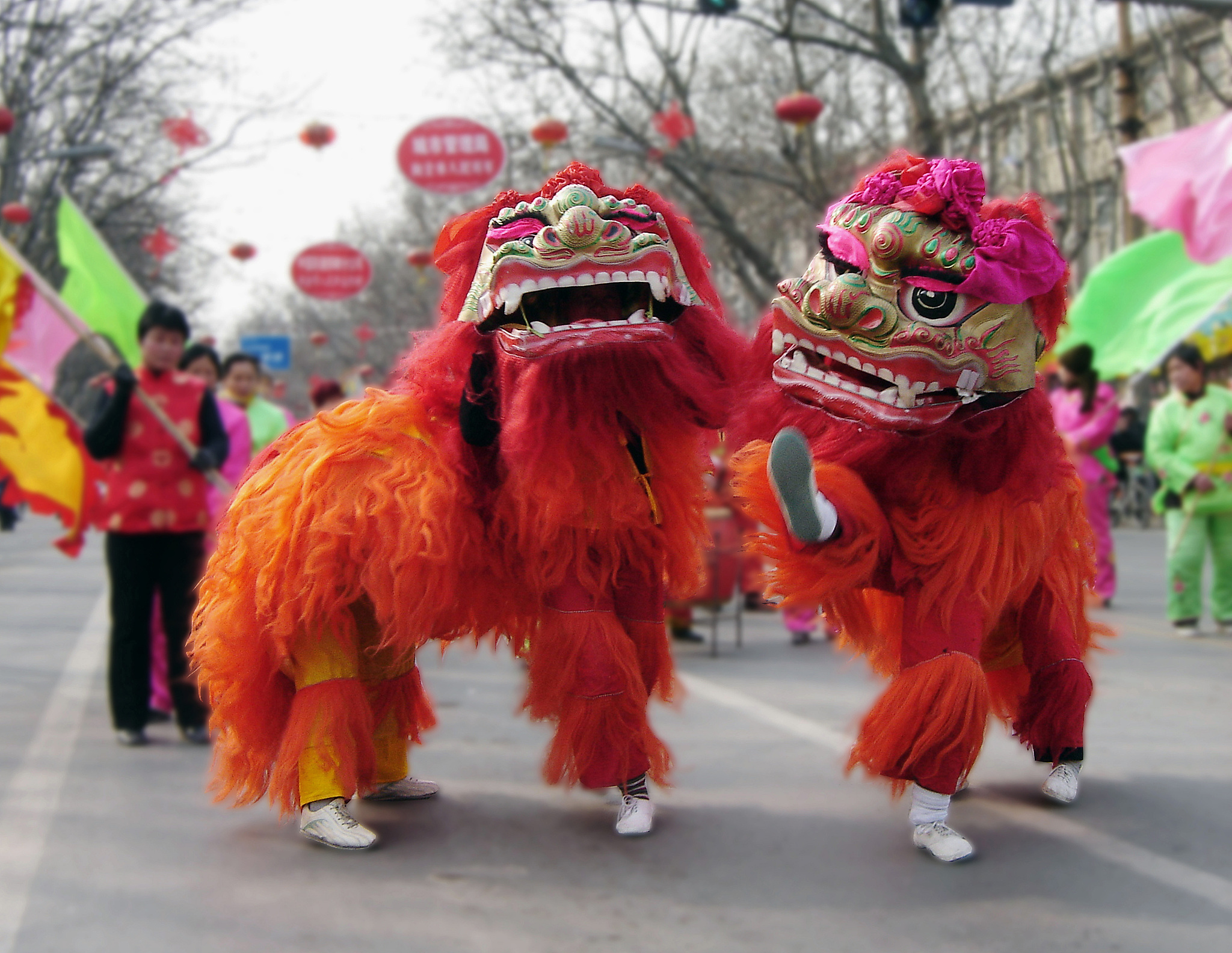 The lion dance in China. /CFP

The lion dance in China. /CFP

It requires two highly-trained dancers in a lion suit. One acts as the head and forelegs, and the other the back and rear legs. The dance is thought to shield people from misfortune and bring good luck.

No Lantern Festival parade is complete without acrobats stomping around on stilts. Usually dressed in colorful costumes, they amaze the audience with their performances.

Stilts used to help farmers gather fruit from trees in ancient times, and later bloomed into a cultural practice. Walking on stilts is very popular in China's northern parts during the Lantern Festival. 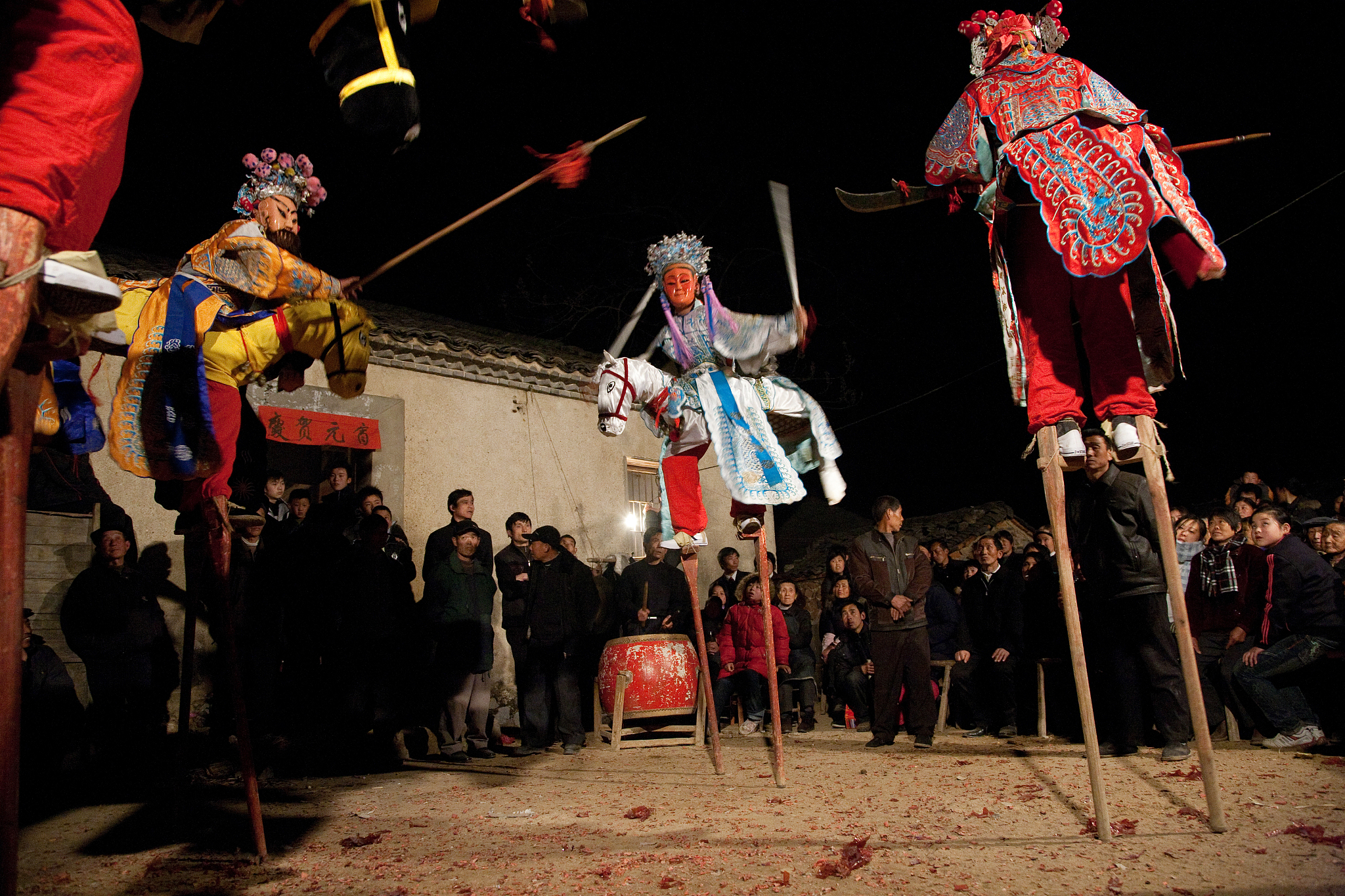 This year, some parts in China have put those folk Lantern Festival activities from offline to online as part of the stringent epidemic prevention and control measures against COVID-19 pandemic. However, this hasn't stopped people from celebrating as they can.