Download
From the Soil: Transforming 'green mountains' into indispensable assets
In the Field 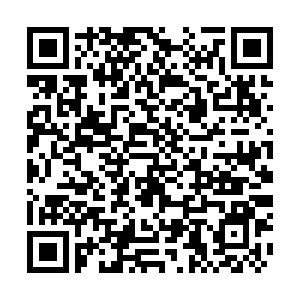 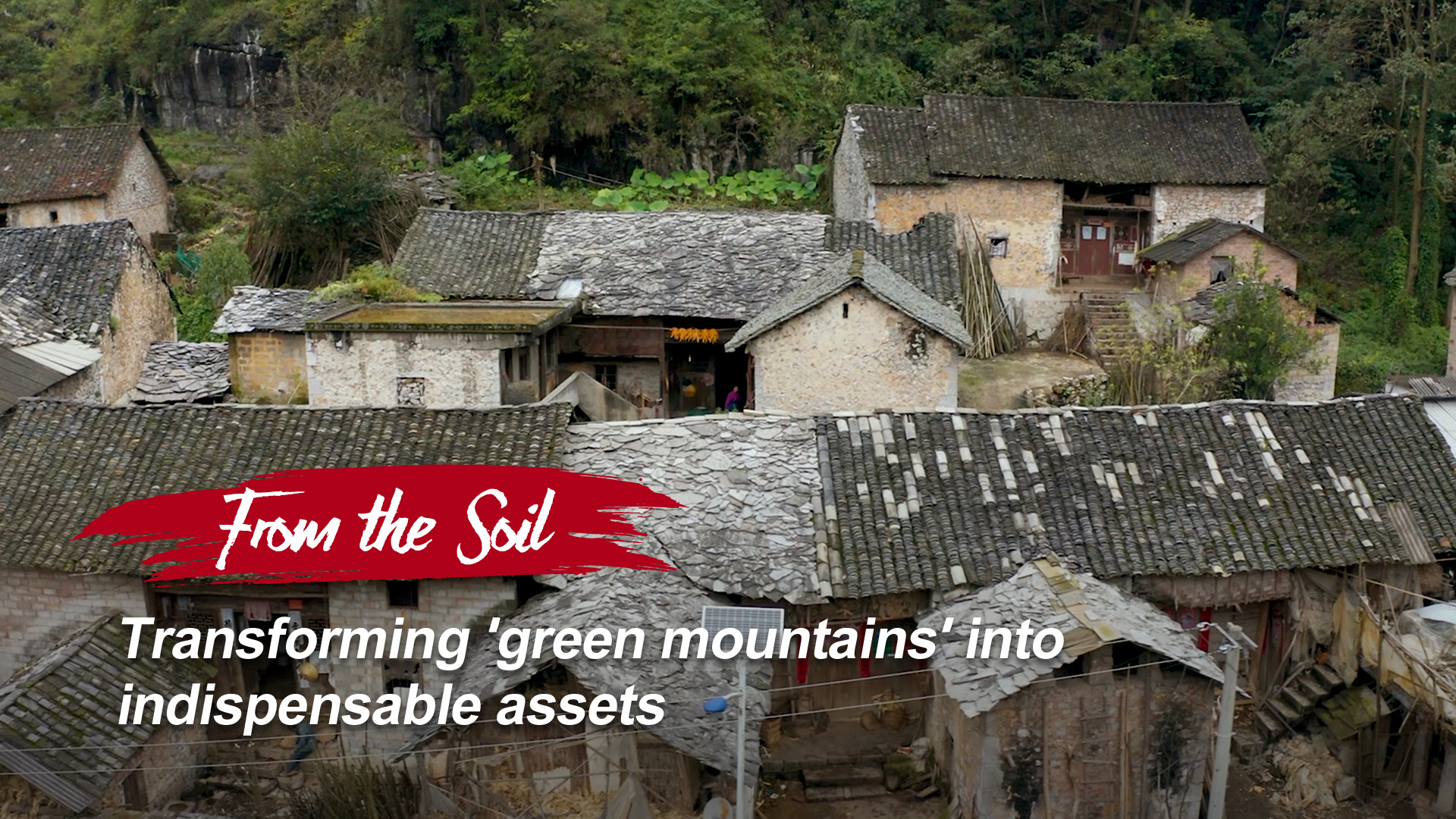 Editor's note: In the video series "From the Soil," CGTN has invited development experts to China's rural regions to investigate the methods used to reduce poverty and examine whether they can inform global poverty alleviation work. In the tenth episode, Tom Wolters, a United Nations consultant, heads to Anshun, to find out how local government has solved the contradiction between poverty eradication and ecological protection. The views expressed in the video are his own and not necessarily those of CGTN.

Six centuries ago, Zhu Yuanzhang, the first emperor of ancient China's Ming Dynasty (1368-1644), ordered 300,000 troops to settle in the mountains of Anshun, in what is now southwest China's Guizhou Province, to guard the border. As time went on, the spirit of persistence gradually faded, as traditional farming practices continued. The ecology of the area has been protected, but it cannot conquer the poverty brought about by the increasing population.

In addition, there are few sunny days and the terrain is not flat, leading to a lack of earning potential. The authorities decided to change the status quo, but the challenge was how to do so in a region with a very traditional mindset of production.

I first came to Guizhou eighteen years ago. I came here on an environmental protection mission. Eighteen years later, I'm back. And I want to see what has happened over time up there in the mountains.

Jichang Township is an ethnic minority township located deep in the mountains of central Guizhou. Transportation here is inconvenient.

Because there are so many mountains and hills with little flat land, farmers have to spread out their crops on a small scale. Continuous rainfall throughout the year makes the soil very wet and limits the variety of plants that can be grown. Farmers have to live on a shoestring, therefore.

"We used to live in houses like these in dirt-poor villages. But now the government is building new houses for everyone here, and now our lives are a hundred times better, now we have electricity and water, and we're happy in every way," said Luo Deliang, one of the leaders of Jichang Township. 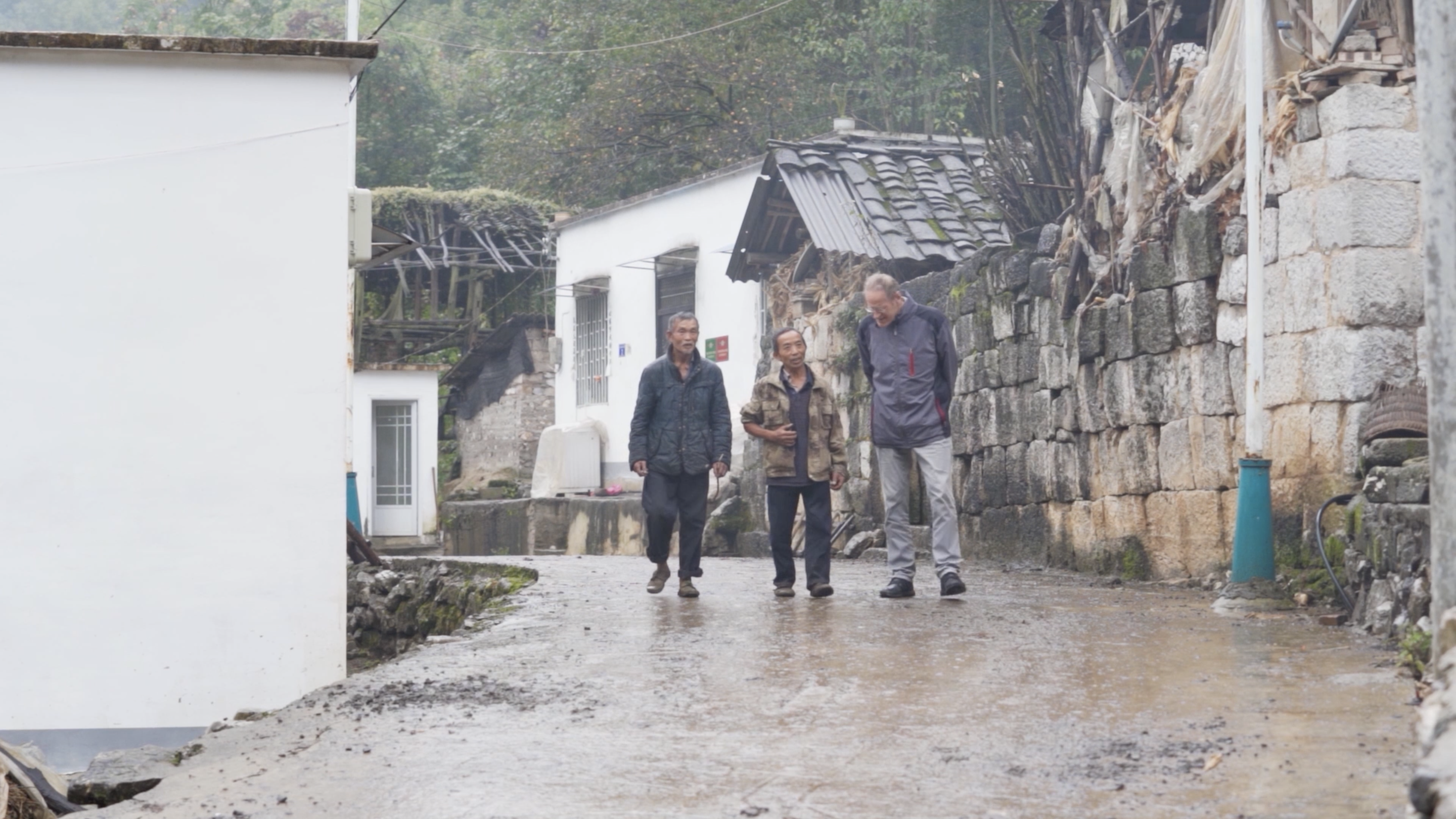 Most of the young villagers have moved down from the mountains, leaving behind mostly old people, but we can see the lives of simplicity that people here have was respected and they got some help. What has really changed is that the government has found a way to resolve the contradiction between cultivated land and population and between climate and crops, while continuing to protect the land they deeply love. So, how do they do it?

With questions like that in mind, I found Tong Wu, deputy head of the Jichang Township.

Through Tong's introduction, I found Bao Aiming, the person in charge of helping the township. Two years ago, Bao came to Anshun City for research. She found that although the climate of the township is humid, there is a natural environment of original ecology, which fully met the new requirements for healthy food in the modern market.

So Bao decided to stay in Anshun, and managed the scattered fields in its entirety. Now she has been appointed the "village industrial head" of four impoverished villages by the government.

In order to apply the ecological concept to the industry, planting, breeding, processing and waste disposal should be linked together. But in the beginning, the residents' distrust of outsiders was a stumbling block for Bao. To help smooth the way for her, the government engaged a volunteer who had served the farmers for decades. 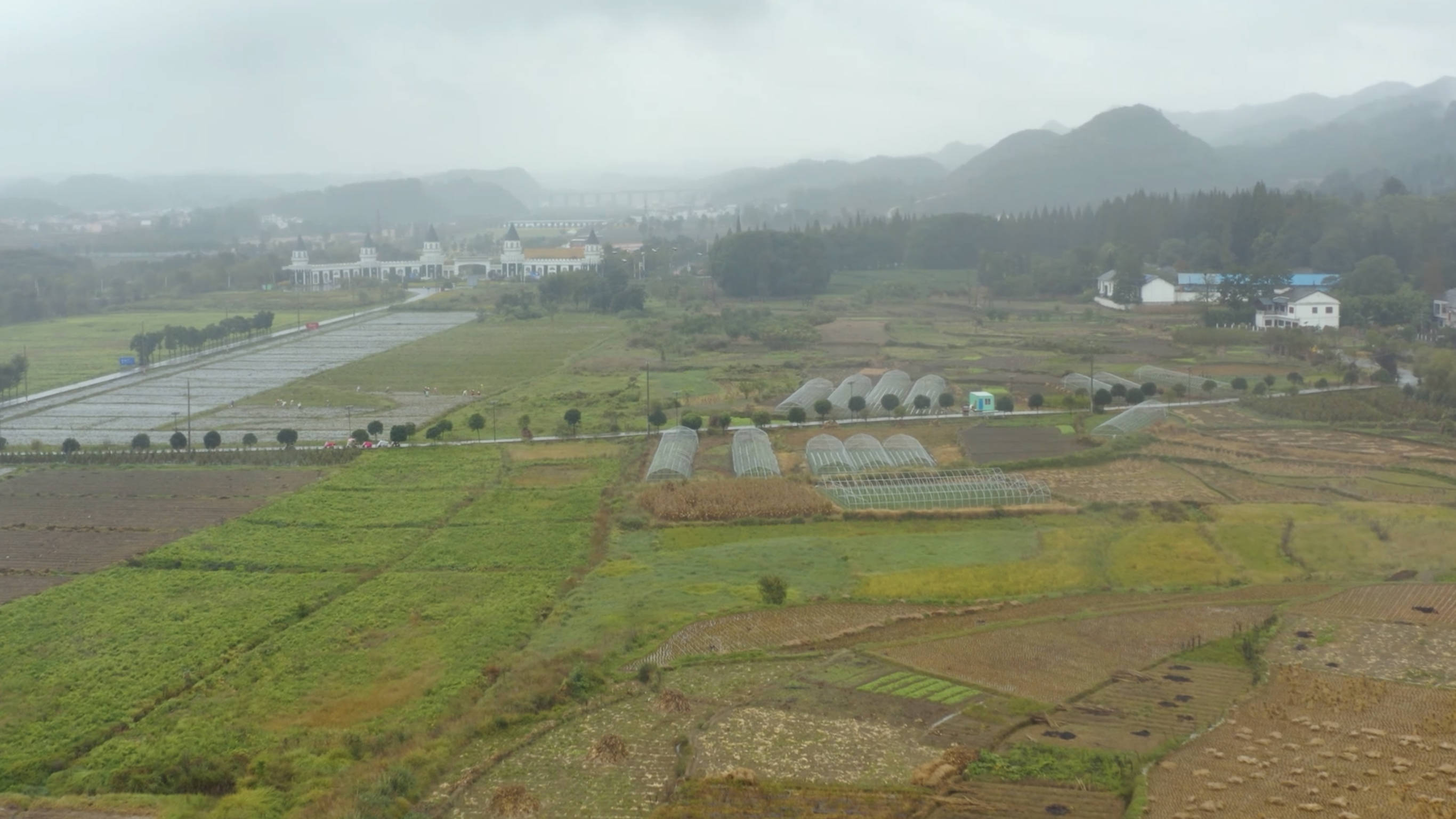 "We established a process of mutual adaptation with the local villagers. In the beginning, some villagers were worried about the future of the market. They were afraid that no one would buy their produce," said Zhu.

From the start, the government joined with enterprises to set up planting bases and provide stable jobs for villagers.

"After generating income last year, the villagers began to trust us, and we signed purchase orders with them. Since last year, the project has been working well and the villagers' motivation has increased, and the young people who left the area to work are now coming back," said Zhu.

What we heard here and what we saw here was the first step in bringing an ecological way of farming to this area, and it was successful, but now we have to find out what else is happening.

Since agricultural products are subject to climatic conditions, why not expand the scope of agriculture and develop ecological farming? I went to the township's Linxia Chicken Eco-Farm, which is an indispensable part of the ecological linkage.

The leader of the farm told me how the farm has changed the life of villagers: "In the past, the income in this village was very low, only about a 1,000 yuan per mu, and farmers did not even have enough to eat. Now we have enough to eat and wear, and some farmers even have cars, and the houses are beautifully built."

This was a cornfield that has been turned into a chicken farm. In raising chickens, you don't have to worry about too much rain or about soil conditions, and you don't need as much space as if you were growing corn. So, the old problem was solved. The chicken eco-farm has increased income two to three times, and raised 125 poor households out of poverty. It has not only helped farmers move out of poverty, but also provides natural organic fertilizers for farming. 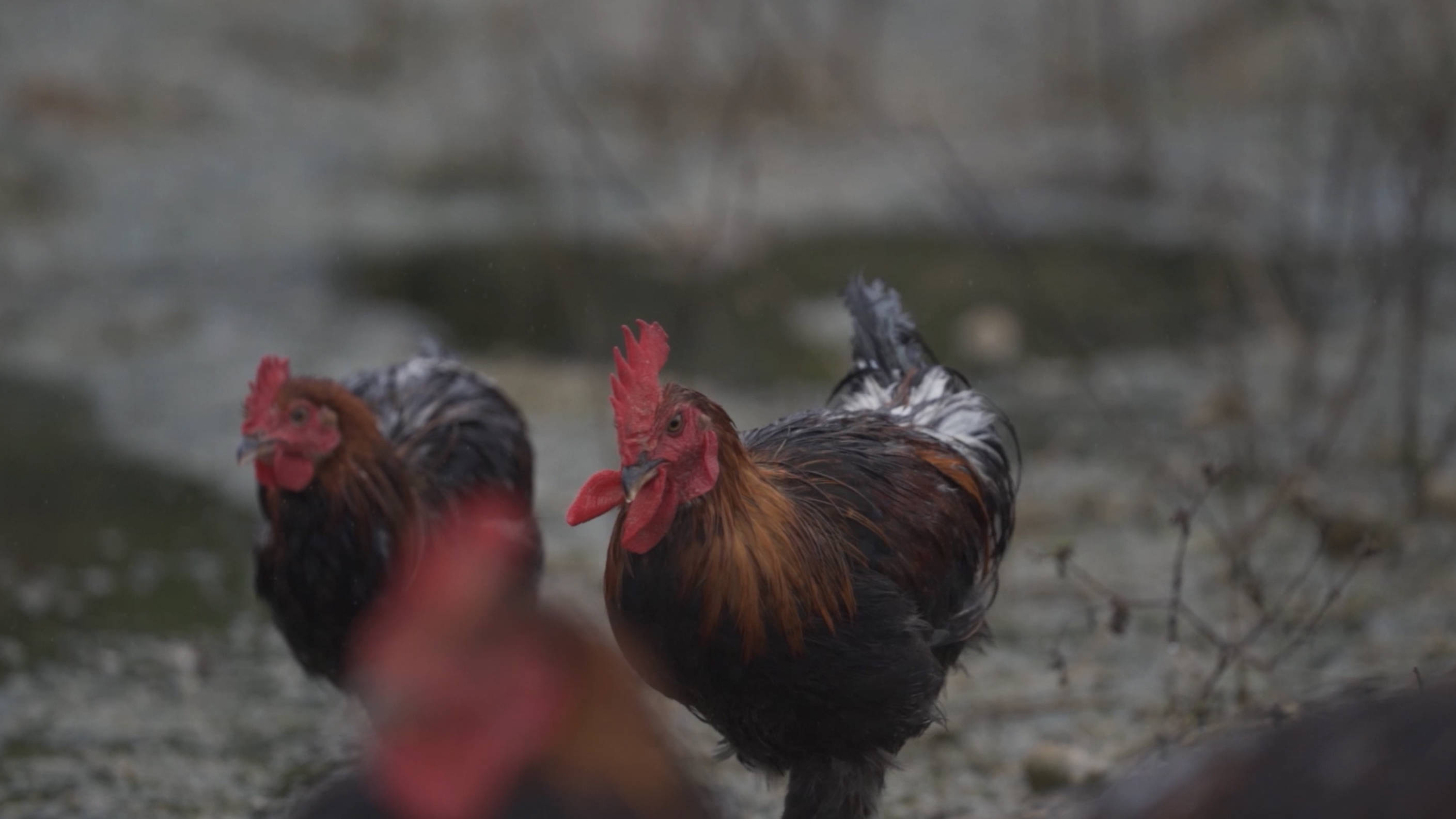 "Our chicken manure can be used on the mountain for planting peppers and ginger which have a high income. We also did some planting, which turned out really nice. The planted corn can be fed to the chickens, ginger can be sold to boost income," said Wang.

In this way, ecological approaches offset the effects of climate and raise the value of farming. In addition, the raw materials produced in an eco-friendly way are ultimately used for organic food processing. And processing makes the value of these ecological agricultural products greatly enhanced in the market. From then on, an ecological circulatory system from land to consumers was formed. At the same time, the large number of jobs created by the factory gave the people here an incentive to stay.

So what we saw here today, started in the field with the workers, with the traditional workers harvesting the ground. And all the produce comes here, in this factory. And in the end, you see, here, through this robot, it is ready to be sent out all over China and maybe all over the world.

By the end of 2019, driven by the power of ecology, the rate of poverty in three impoverished villages, including Jichang Township, dropped to zero. In just one year, the average annual income of local farmers rose from a few thousand yuan to nearly 20,000 yuan. Elders called young people back to help develop local industries, and girls from outside married into the village, slowly restoring its vitality. People's lives began to change.

Lifting people out of poverty brings not only happiness, but people start to enjoy life. Chen Xiansong is the inheritor of the Tianlong Tunpu opera. Since living conditions have improved, more and more people are coming to the theater to watch opera, and learn opera. The traditional local opera culture recorded the glory of the place, while the audience showed peace and happiness here.

Anshun tells us that ecological industry can be used to inherit the tradition, drive the economy, and even protect the ecology itself. The disadvantages of climate and land can also be turned into local advantages through ecological linkages. The region has demonstrated that the "green mountains are gold mountains" development thinking proposed by China's leaders is feasible. For many of the world's poor areas still in the original ecological environment, this thinking is a very good reference.