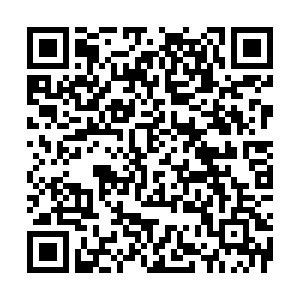 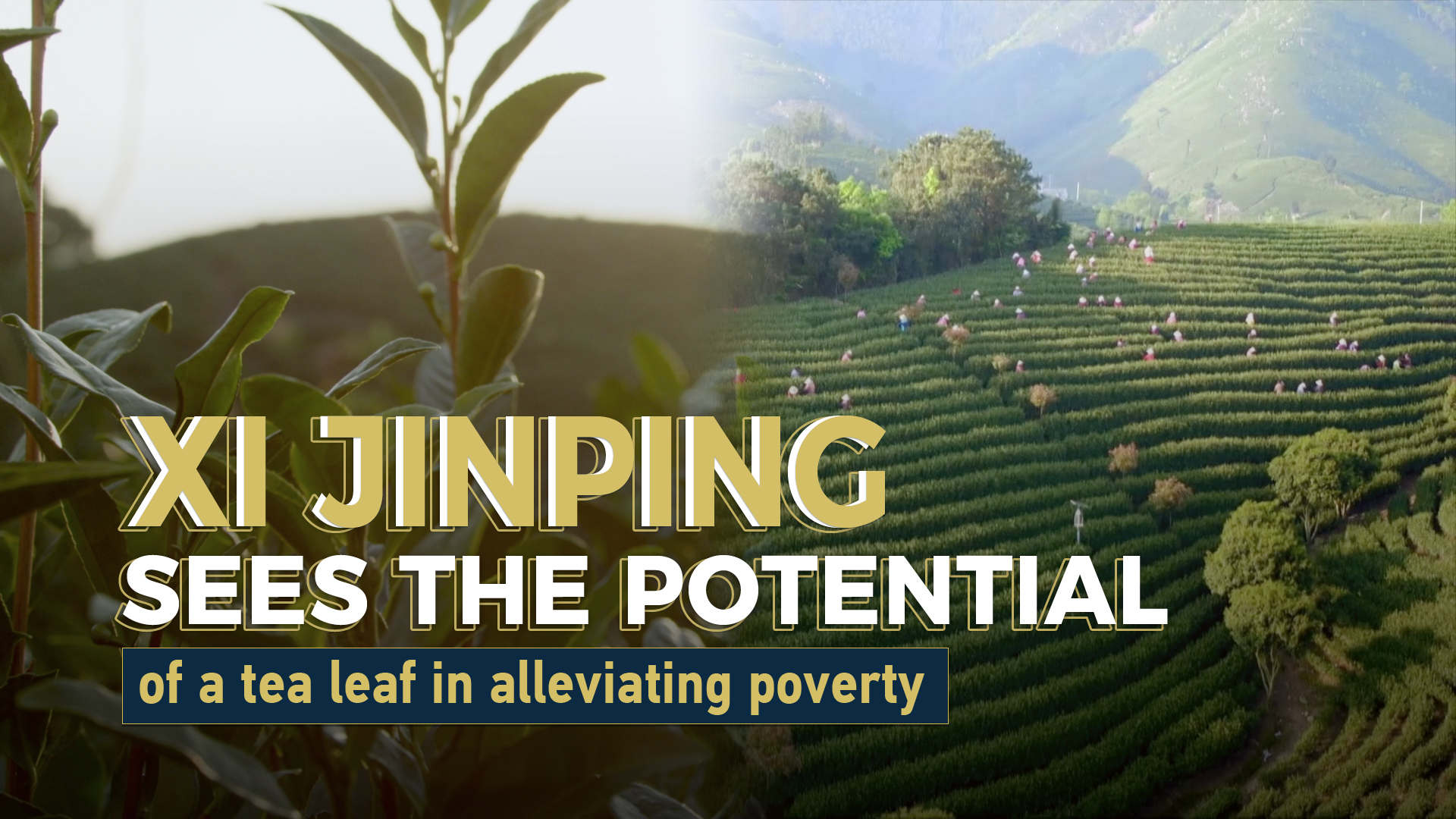 A leaf has turned a poverty-stricken village in east China's Zhejiang Province into a tea garden. The village's turning point was the 2003 visit of Xi Jinping, then a provincial official who placed poverty alleviation at the heart of his political work.

A leaf brings hope to a poor village

In 1989, the only road in Huangdu Village was a winding and muddy dirt path. Houses and buildings were also dilapidated. It was one of the poorest villages in Anji County of Zhejiang Province.

Around 1997, the then secretary of the Communist Party of China (CPC) branch in the village proposed to cultivate white tea leaves and create a local tea production base as a source of income.

But the idea was rejected by the villagers. "They were unwilling to plant tea leaves, and were concerned with the sales," recalled Sheng Alin, the then Party secretary of the village. To set an example, local officials took the lead in planting white tea leaves and offered 4,500 yuan ($543) in subsidies for every hectare of land. Gradually, villagers were motivated and production increased. 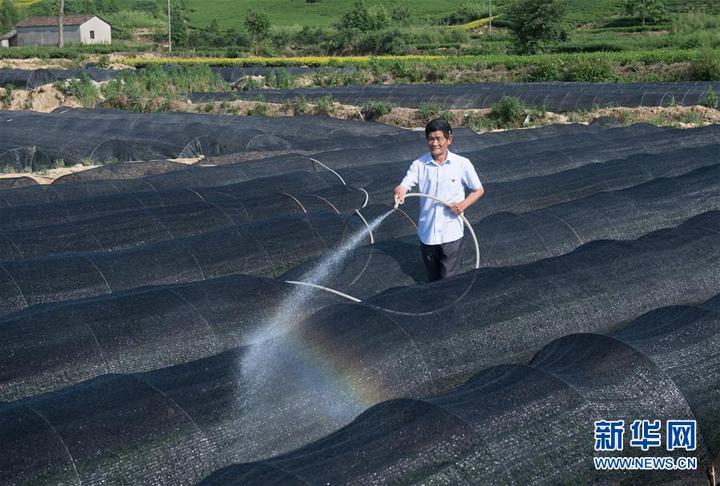 The real turning point came on April 9, 2003, when the then Secretary of the CPC Zhejiang Provincial Committee Xi Jinping inspected Huangdu Village.

He walked around the tea production base along the muddy roads and inquired about tea cultivation. When hearing that the village was making more than 180,000 yuan in profits annually, he was happy and said, "A leaf created an industry and made the local people rich."

"Huangdu Village became rich by growing tea thanks to the words by Xi Jinping," said Sheng Awei, the current local Party secretary. "He was far-sighted and saw we were on the right path. We turned a barren mountain into a tea garden!"

After Xi's visit, the village expanded its tea base. By 2010, the growing area topped 667 hectares and ranked first in the county. In 2019, tea output was valued at more than 400 million yuan in the village, and the annual per capita income exceeded 49,000 yuan. "It's a far cry from what it was 20 years ago!" cheered Sheng Awei. 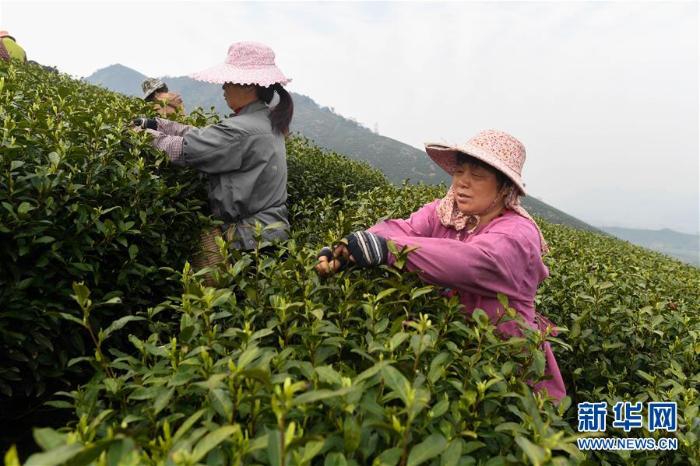 Xi has worked in counties, cities, provinces, and the central government of China for over 40 years. He stayed in Zhejiang for five years from 2002 to 2007. At the time, Zhejiang had 26 underdeveloped counties and 361 underdeveloped townships. After Xi became secretary of the provincial Party committee, he visited 11 cities and more than 20 counties in a short period of time, many of which were economically struggling mountainous counties.

Gu Yikang, who at the time was vice director of Zhejiang Provincial Rural Affairs Office, accompanied Xi on his visits to underdeveloped mountainous regions in 2003 and 2004. "He (Xi) always stressed that we wouldn't achieve all-round well-being in Zhejiang before the underdeveloped regions achieved moderate prosperity," Gu said, adding that Xi paid much attention to the development of the tea industry in these regions.

"Tea production in Zhejiang has risen for 20 consecutive years, which has not only increased the income of millions of farmers, but also provided a new idea about the transition of the rural economic growth pattern. It also provided the basis and conditions for the construction of a new socialist countryside," wrote Xi in a 2006 article.

Under Xi's leadership, Zhejiang carried out several development projects for underdeveloped areas. By 2007, the annual per capita income of farmers in 361 townships exceeded the national rural average. By 2015, the remaining 26 impoverished counties in Zhejiang had been removed from the poverty list. Zhejiang became the first province in China to get rid of extreme poverty. 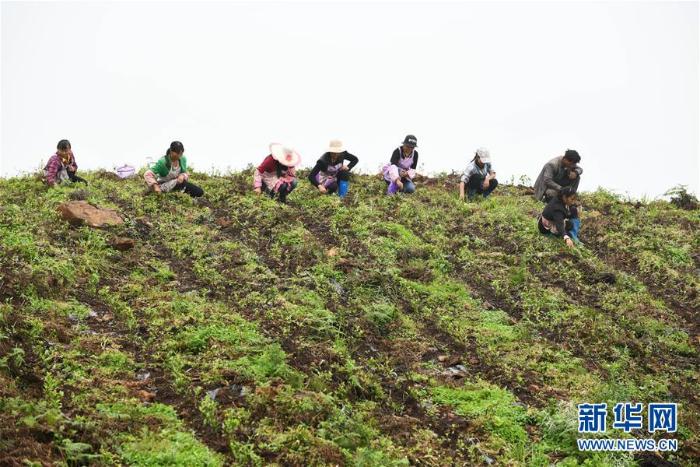 The year 2018 marked the 15th anniversary of Xi's visit to Huangdu Village. Since his trip, life has become easier and more dignified for villagers thanks to their tea business and Xi's foresight. Sheng Awei and 19 other Party members wrote a letter to Xi, telling him the villagers would like to donate 15 million tea seedlings to poverty-stricken areas to help them shake off poverty.

In his reply to the letter, Xi praised the idea of "when drinking the water of a well, one should never forget those who dug it; after becoming rich, they have never forgotten the kindness and love of the Party." He wrote that it is of great significance that those who have already become better off help those who are still living in poverty.