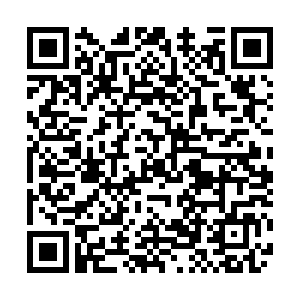 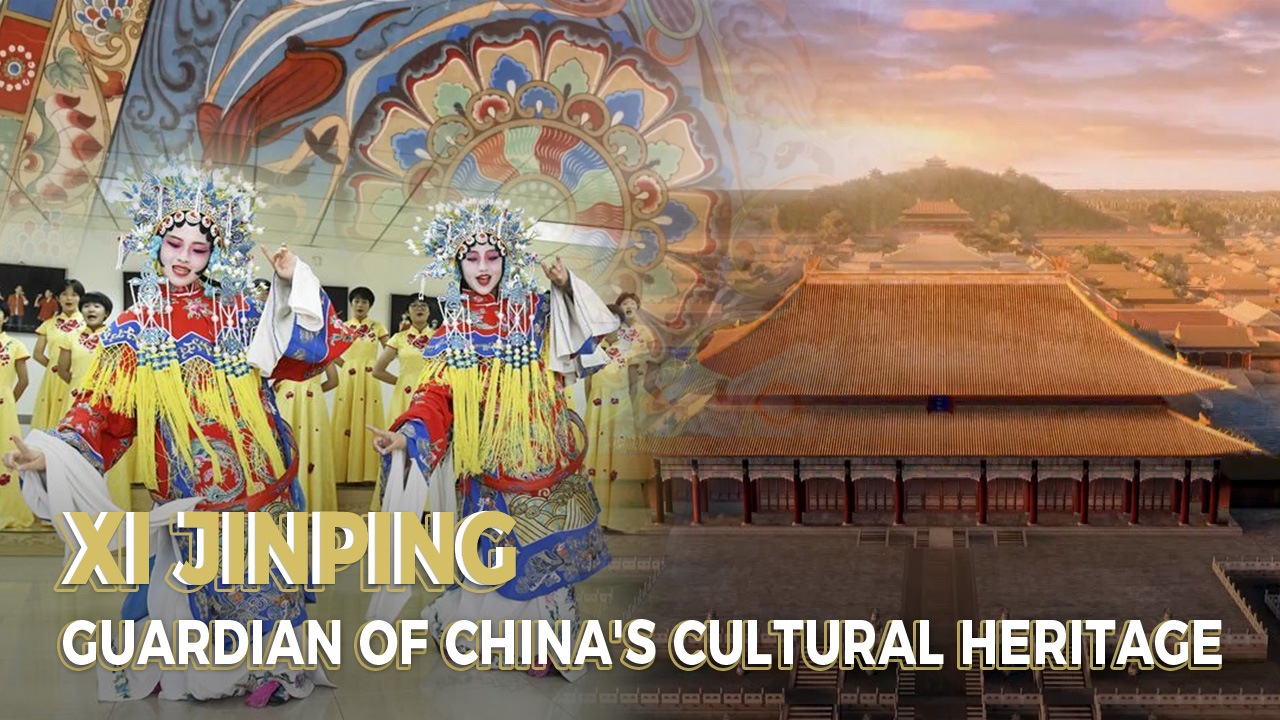 Preserving cultural heritage is one of the key ideas of Chinese President Xi Jinping's governance philosophy.

President Xi has been an advocate of Chinese culture, promoting it both at home and abroad, and a champion of cross-civilizational communication, which he believes is key to mutual learning and respect among nations.

Whether on a domestic trip or a state visit overseas, Xi always found time to tour cultural landmarks and archaeological sites to learn about the past and gain better understanding of human history and different cultures.

His speeches and addresses often reference the history of China and the world, the legacy of civilizations and the rich exchanges between societies since ancient times.

"Having gone through over 5,000 years of vicissitudes, the Chinese civilization has always kept to its original root. As the unique cultural identity of the Chinese nation, it contains our most profound cultural pursuits and provides us with abundant nourishment for existence and development," he said during a speech at the UNESCO headquarters in March 2014 in Paris.

For him, the Chinese civilization is an example of the constant exchanges with other cultures over time. These interactions are crucial for mutual respect and understanding and a bridge to a better future.

"Diversity spurs interaction among civilizations, which in turn promotes mutual learning and their further development. We need to promote exchanges and mutual learning among countries, nations and cultures around the world, and strengthen popular support for jointly building a community with a shared future for both Asia and mankind as a whole," Xi said during the Conference on Dialogue of Asian Civilizations in May 2019 in Beijing.

President Xi has called on the Chinese people to cherish, honor and deepen their knowledge of the Chinese civilization and strengthen cultural confidence.

Relics, as protectors of the national spirit, are one way to gain insight into and appreciation for Chinese culture.

In August 2019 during an inspection tour in the northwestern province of Gansu, Xi visited the Mogao Grottoes to learn about protection and research efforts there. 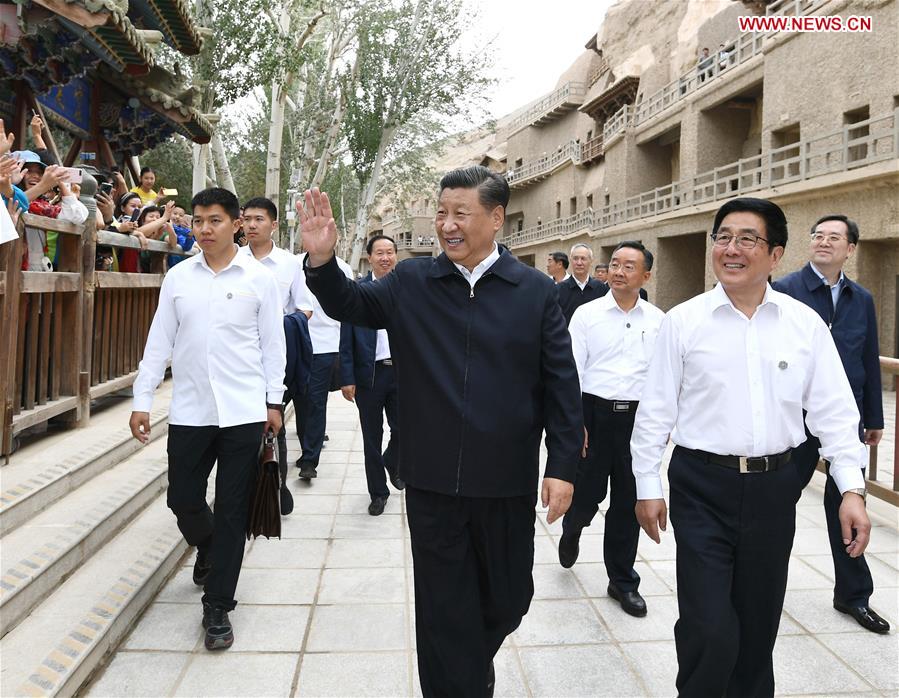 The Mogao Grottoes in Dunhuang are home to more than 2,000 colored sculptures and 45,000 square meters of murals spread across 735 caves. They were designated as a World Heritage Site by UNESCO in 1987.

"The research into and promotion of the Dunhuang culture help reveal the cultural spirit, cultural vision and cultural confidence of the Chinese nation," he said. "Only a confident civilization can absorb and draw on the achievements of other civilizations while maintaining its own characteristics."

While visiting Guangzhou, south China's Guangdong Province, in 2018, Xi walked into the Cantonese Opera Art Museum and spoke with opera fans. In Hangzhou, in the eastern province of Zhejiang, in 2020, he encouraged makers of Longjing tea to preserve their craft. 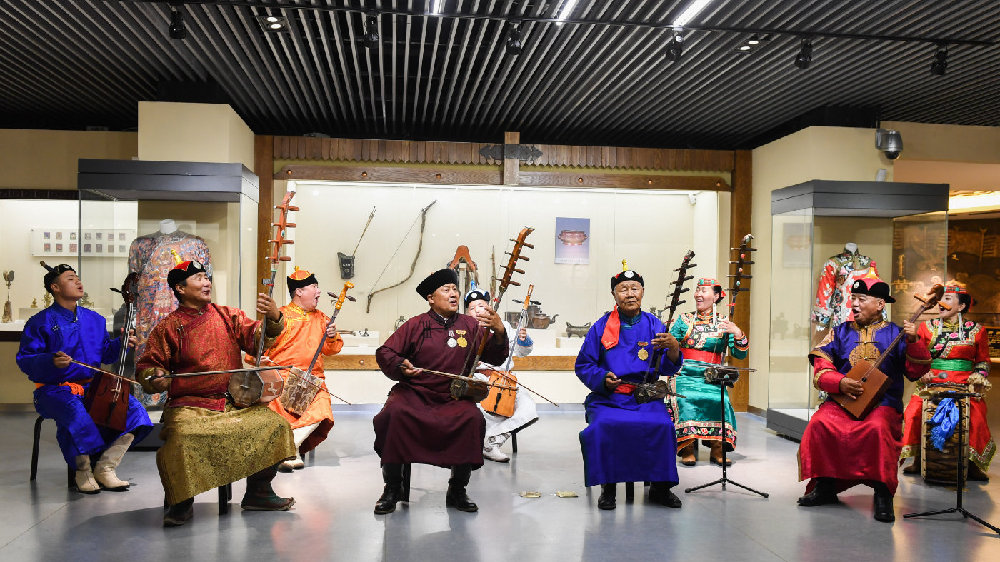 When President Xi visited Chifeng, north China's Inner Mongolia Autonomous Region, in 2019, he attended a performance for "The Epic of King Gesar," which is thought to be the longest literary work in the world and one of the oldest epic poems in history.

It recounts the story of how an 11th century Tibetan demigod king conquered his enemies and helped ordinary people. In 2009, it was inscribed on the UNESCO Representative List of the Intangible Cultural Heritage of Humanity.

"When we protect our intangible cultural heritage, special attention must be paid to protecting and inheriting those of our ethnic minorities," Xi said.

China has 42 intangible cultural heritage items on the UNESCO Representative List of the Intangible Cultural Heritage of Humanity, more than any other country.

During his speech at the UNESCO headquarters in 2014, President Xi mentioned 20 pieces of colored glaze ware excavated in 1987 from the underground chamber of Famen Temple in China's Shaanxi Province. These East Roman and Islamic relics were brought into China during the Tang Dynasty (618-907).

Two pieces from the 20 exquisite East Roman and Islamic relics brought to light in 1987 from the underground chamber of Famen Temple in China's Shaanxi Province. /Xinhua

Two pieces from the 20 exquisite East Roman and Islamic relics brought to light in 1987 from the underground chamber of Famen Temple in China's Shaanxi Province. /Xinhua

"Marveling at these exotic relics, I thought hard and concluded that as we approach the world's different civilizations, we should not limit ourselves to just admiring the exquisiteness of the objects involved. Rather, we should try to learn and appreciate the cultural significance behind them. Instead of satisfying ourselves with their artistic presentation of people's life in the past, we should do our best to breathe new life into their inherent spirit," he said.

President Xi has visited many cultural sites around the world, from the Central Asian city of Samarkand and the Luxor Temple in Egypt to Wat Phra Kaew in Bangkok and the Acropolis in Athens. He expressed admiration for the rich diversity of civilizations and showed readiness to better preserve and maintain the beauty of heterogeneity.

On April 27, 2018, Xi held an informal meeting with Indian Prime Minister Narendra Modi in the central Chinese city of Wuhan. The two leaders visited an exhibition of cultural relics at Hubei Museum and shook hands in front of 2,400-year-old chime bells unearthed from the tomb of Marquis Yi of the Zeng State. 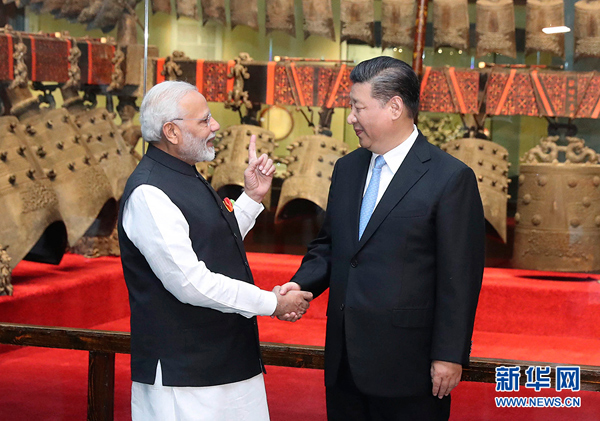 During the meeting, Xi said that both China and India are countries with a splendid history and culture, and there are many similarities between the two cultures. He added that China and India should conduct exchanges in wider areas and at a deeper level, commit themselves to the revival of Eastern civilizations, advocate the respect for diversity of civilizations and promote harmonious coexistence of different civilizations.

"A civilization is the collective memory of a country or a nation. We should keep our own civilizations dynamic and create conditions for other civilizations to flourish. Together we can make the garden of world civilizations colorful and vibrant," he said at the Conference on Dialogue of Asian Civilizations in May 2019.