Download
From the Soil: Youxi – Where farmers become technical experts
In the Field 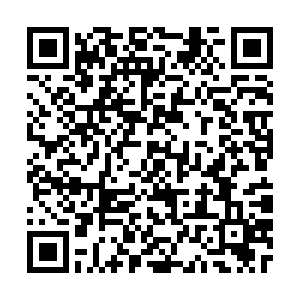 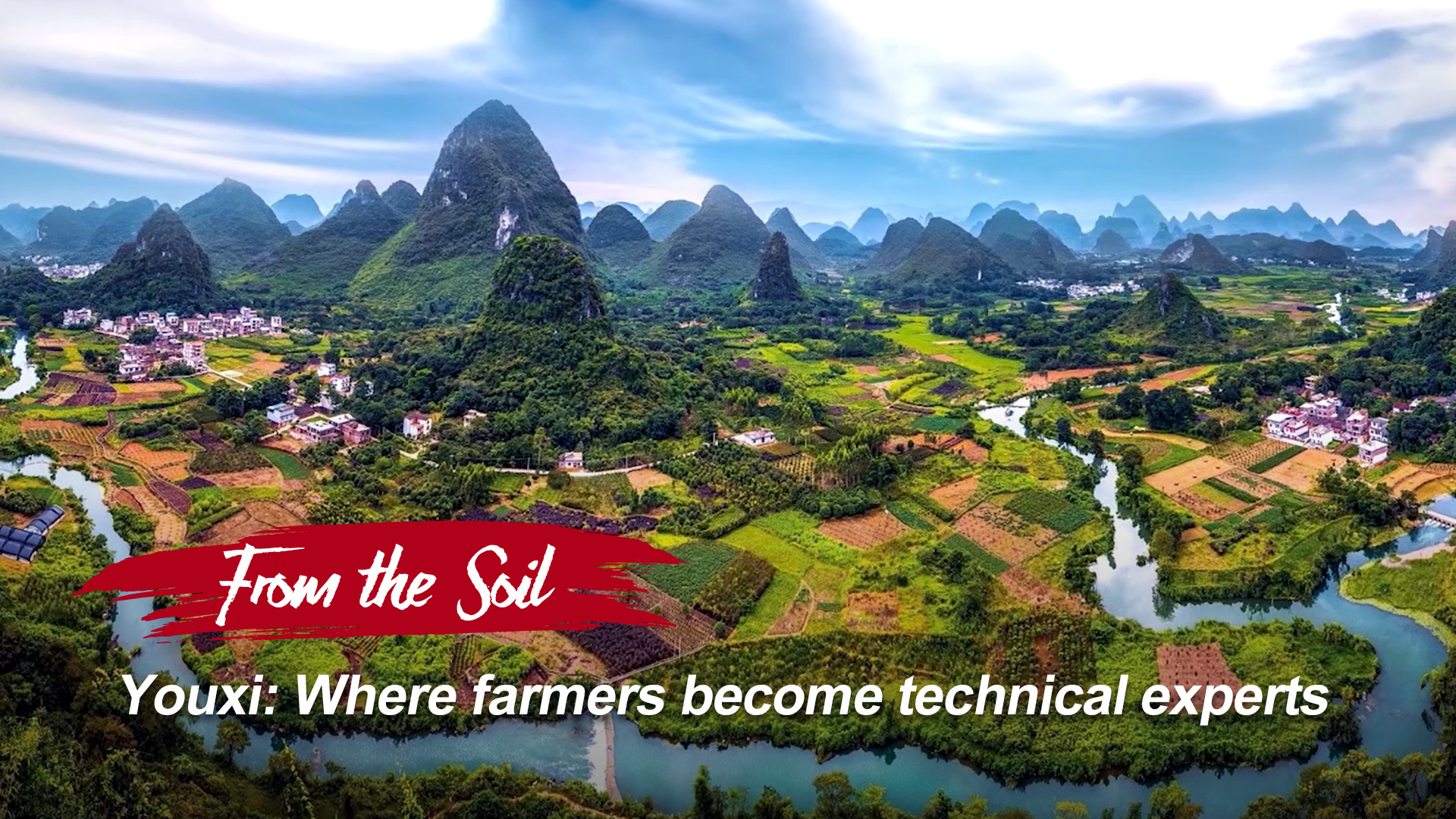 Editor's note: In the video series "From the Soil," CGTN has invited development experts to visit China's rural regions to investigate the methods used to reduce poverty and examine whether they can inform global poverty alleviation work. In the 14th episode, Tom Wolters, a United Nations consultant, goes to Youxi to find out how businesses, governments and local people can coordinate their efforts and work together to help villages reduce poverty. The views expressed in the video are his own and not necessarily those of CGTN.

For hundreds of years, Youxi in Fujian Province has been known for its cascading terraces, field houses and hardworking people. The ancient Chinese philosopher Zhu Xi was born here, and his ideas, having emerged from the mountains, became a spiritual force driving not only Chinese society, but also influencing the values of Asian and even Western societies. But the mountains hindered economic development and communication with the outside world, farming techniques struggled to advance, and the distinctive local character of the area did not bring prosperity to the people here.

I'm Tom Wolters from the Netherlands. I've visited many villages in my work for the UN and EU rural development programs around the world aimed at alleviating poverty. I came to Youxi to find out how this very distinctive place got out of poverty and from where it received assistance.

"Our village is located in the mountainous area, and life was very difficult in the past. The transport network was not good, the roads were not accessible, and farmers were able to grow only some grain. Now the farmers' living standard has improved, their income has increased, and the problems of schooling and transportation have been solved. These old and dilapidated houses used to leak, but now you can see that the tiles are all repaired. Thanks to good policies, we farmers are now very happy and our environment has changed in all aspects, said Cai Wei Long, the former secretary of Jishen Village in Yangzhong Township, Youxi County. 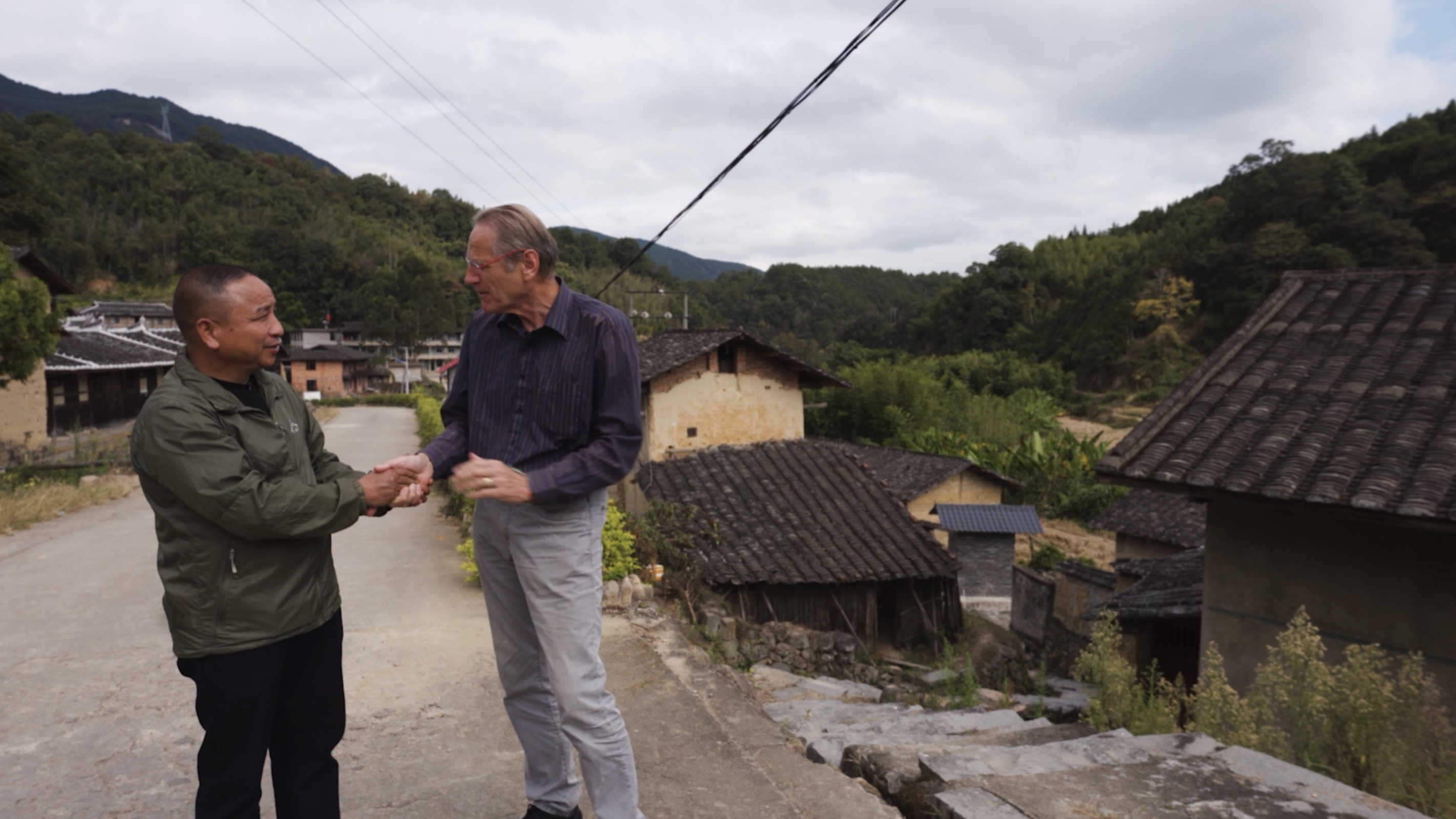 Through his story, I learned how the government's policies have translated into practical measures that have benefited the villagers. There is a Chinese saying, "To get rich, first you need to build a road". With the construction of roads, houses and electricity, the basic conditions for a prolonged livelihood of the villagers are guaranteed. The villages have a new look now. This effort is fast and visible.

In the conversation, we met with Cai Dongjiao, who was busy drying tea-oil camellia seeds. But I didn't expect that growing camellia wouldn’t bring her much profit.

"In the past, because of the bad transportation system, we did not know what to plant, and after planting, there was no one to buy our products, so the harvest could not be converted into income," said Cai.

But since a tea-oil camellia enterprise came into the village, Cai Dongjiao's life began to change. This private company not only sent technicians to teach them the technology of growing camellia, but also employed Cai Dongjiao and others to work in the fields and factories, and company became a stable buyer.

From seed selection to planting, fertilizing and picking, this enterprise arranges for hands-on guidance from technicians at every stage. Now each disadvantaged household has at least one person to master one or two practical skills. But it's easier said than done.

"When the company was established here, the foresters were not attracted by our modern management approach, they found communicating with us difficult, and did not completely trust us. So what did we do? We turned our base into a modern management demonstration site, and it was only after a period of time that the foresters gradually began to trust us and then followed our approach to cultivating tea-oil camellia, said You Hongjin, a farming technician.

After training, the new tea-oil camellia trees are harvested one year earlier than the old ones, and the oil yield is significantly higher.

Today, villager Cai has turned into an expert. In fact, she is the epitome of the millions of villagers who have been helped across the country. In China, there are now more than 10,000 private companies like this that are committed to helping economically disadvantaged villages to accelerate the process of poverty eradication. I was curious to see how this enterprise became associated with poverty reduction. 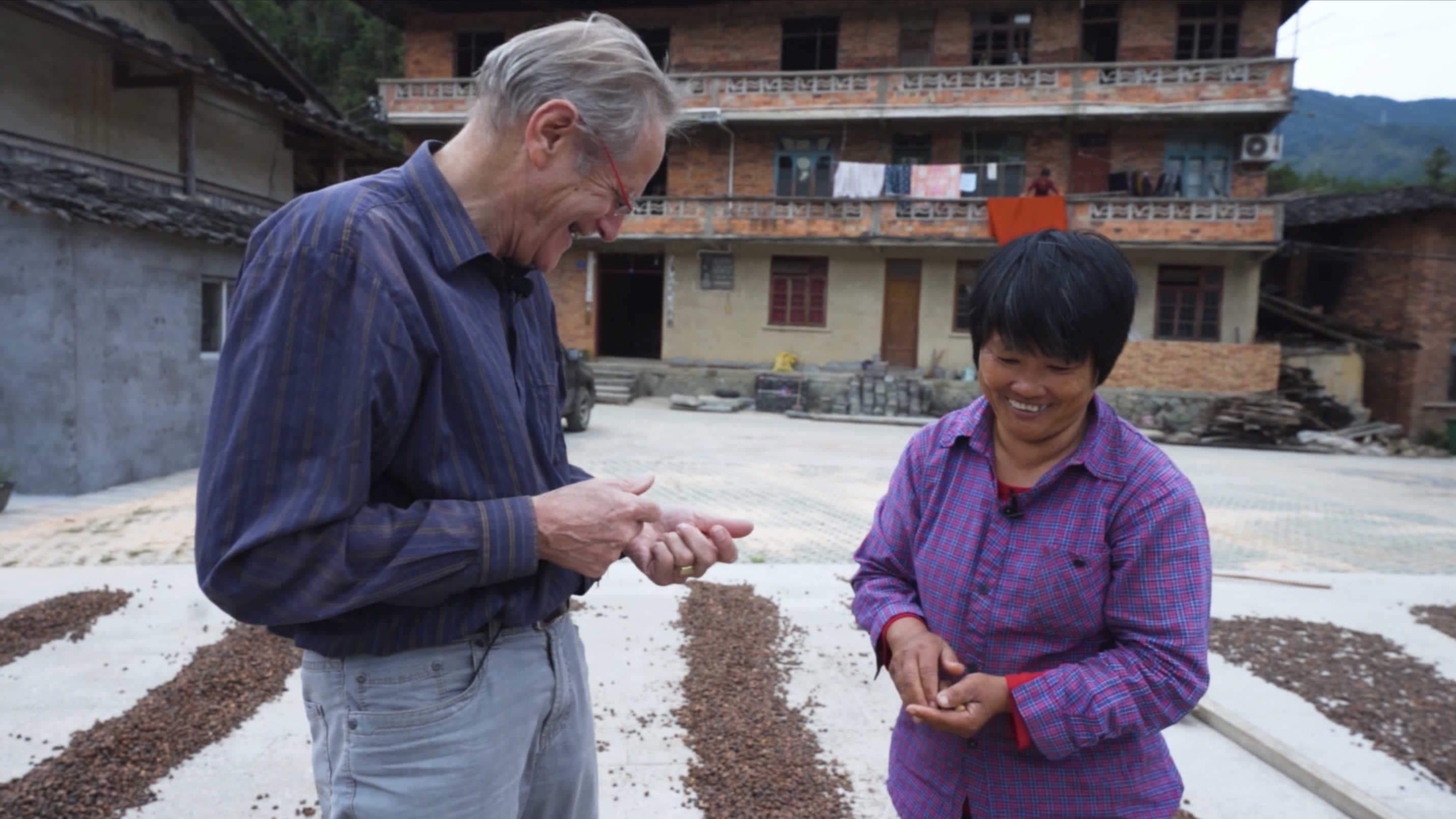 "We learned at the beginning of our business that the local people had a long history of growing tea-oil camellia, and the planting area was very large, and every farmer had camellia in their own homes, but they did not sell it in the market, so their income was low. We wanted to assist them to process better tea oil and then sell it in the market to help them lead a better life, said Hu Fengxiang, chairman of the enterprise.

In line with this idea, this camellia company has developed a set of unique poverty alleviation programs. First, the company provides seeds, fertilizers and tools free of charge. Second, the foresters are instructed to plant according to the organic standards. And then the company buys the product at 10% or even 20% above the market price. Last but not least, the company employs local people to work in the mountains and factories.

In China, corporate social responsibility is being successfully applied to poverty alleviation practices. Companies no longer limit their vision to profits, but give more consideration to the interests of the economically disadvantaged people and the development of the mountain economy, thus contributing to the overall development of society.

I also reached out to employee Chen Bizhen to ask her what her job was like and what it brought to her.

"I was working as a temporary worker near Hongzhuting before, but the salary was not stable. Then I heard that there was an opportunity here, so I came here. I have learned a lot of things, including canning, bottling, coding, engraving, encapsulation, labeling, and so on. Before this job, my monthly income was sometimes more than 1,000 yuan, sometimes just a few hundred yuan, and the job was not stable, but now it is stable, and I earn 3,500 yuan per month, and I have social security,” said Chen Bizhen, employee of FJSL Oil Corporation. 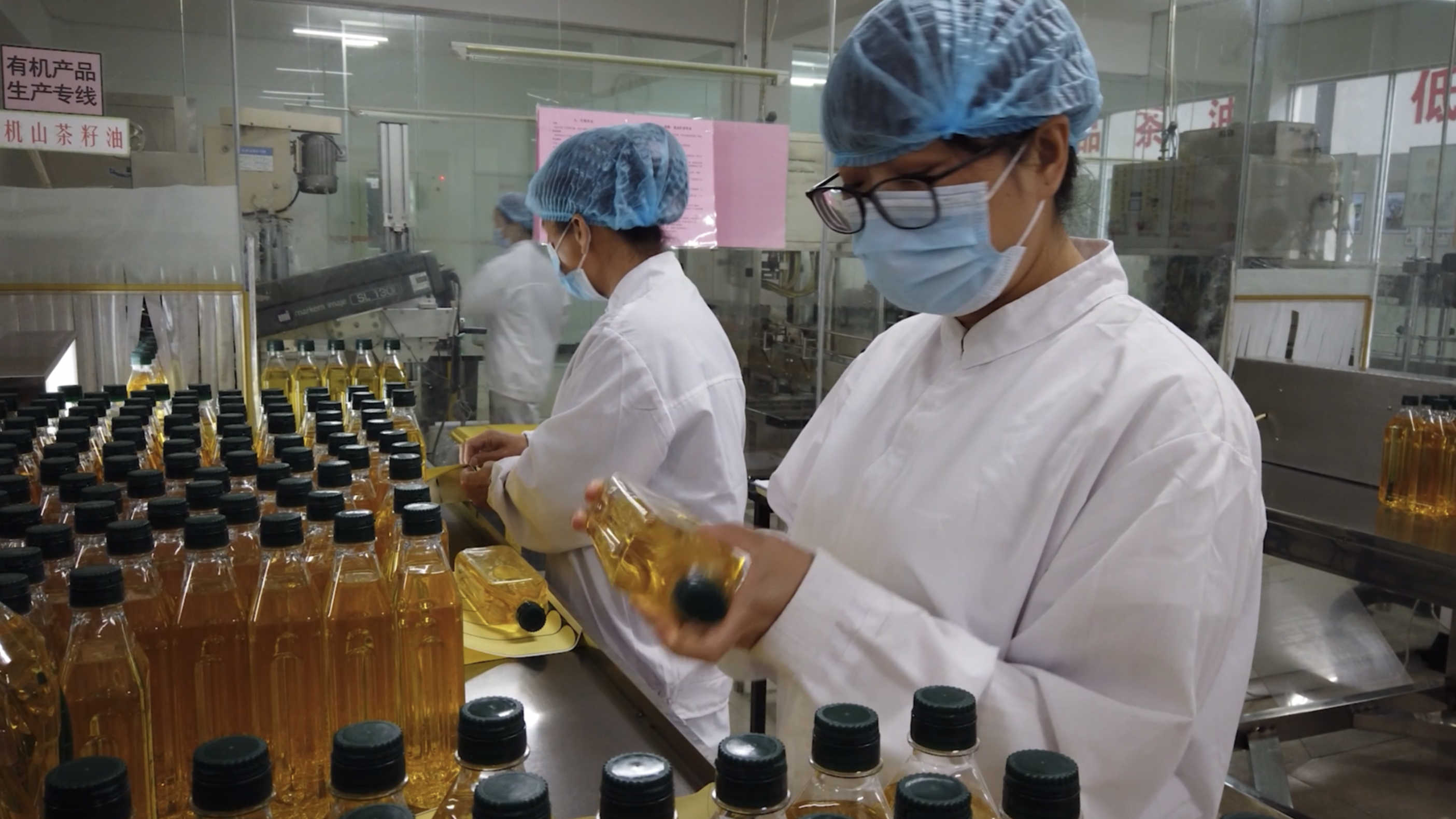 The government also cooperates with enterprises to establish poverty alleviation workshops to help economically disadvantaged households find employment at their doorstep. So that they not only earn money with their craft, but also do not have to go far away from home.

The government ensures basic living conditions by building infrastructure, and companies use factories to help villagers become self-reliant. Beyond that, what other ways are there to help reduce poverty? I remembered that Cai Dongjiao told me that there were many young people in the village engaged in e-commerce, so I went to meet them

"Before I came here, I was doing some temporary work at home, mainly taking care of the children, and now my e-commerce business has slowly taken off. I have been doing this for almost a year, and now the business has stabilized, my income is higher than before. Two years ago, my family bought a house here, and now the whole family is living in town, said Yang Libing, Taobao Operations Specialist, Wojiayouli E-Commerce Co. Youxi.

This e-commerce brand, built by the locals themselves, spreads information about special agricultural products to all over the country every day. Many young people are attracted by them and return to their hometown to start their own businesses, hoping to do their part in lifting their hometowns out of poverty. Poverty alleviation is not just someone else's business and mobilizing the locals also creates a lot of inspiration.

Youxi shows us how businesses, governments and local people can coordinate their efforts and work together to help villages reduce poverty. But there are more causes of poverty, and the solution to poverty cannot be found in isolation. The combined efforts of these three parties created a powerful force for change in Youxi, and offered a variety of options for changing the face of other poverty-stricken villages in China and even around the world.