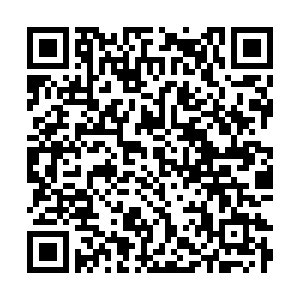 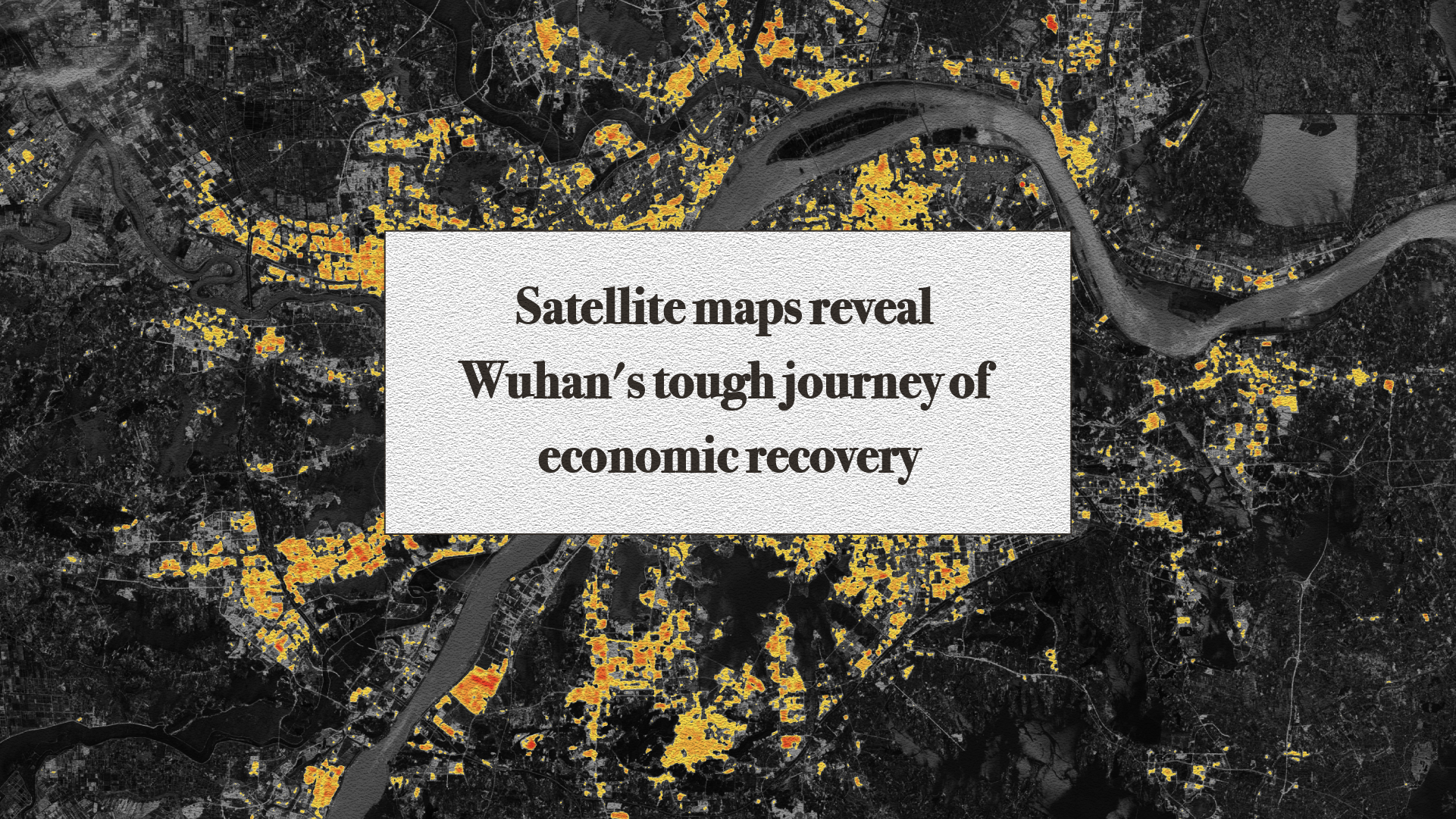 Editor's note: In a post-pandemic world, a COVID-19 vaccine is like the light at the end of the tunnel. At the same time, China's strong economic recovery offers hope to the world. How did the Chinese economy manage to rebound amid a raging pandemic? Data Speaks is a six-episode series that analyzes China's economic growth from different perspectives. The sixth one looks at Wuhan's economic recovery through satellite maps.

This heat map shows Wuhan during its lockdown in February 2020. With no one outside and few factories open, the satellite image reveals a city in darkness. In the first quarter of 2020, the output growth of all industries in Wuhan sharply decreased, with one exception only: The local tobacco industry. People smoked more cigarettes perhaps due to their anxiety or fears over the lockdown. 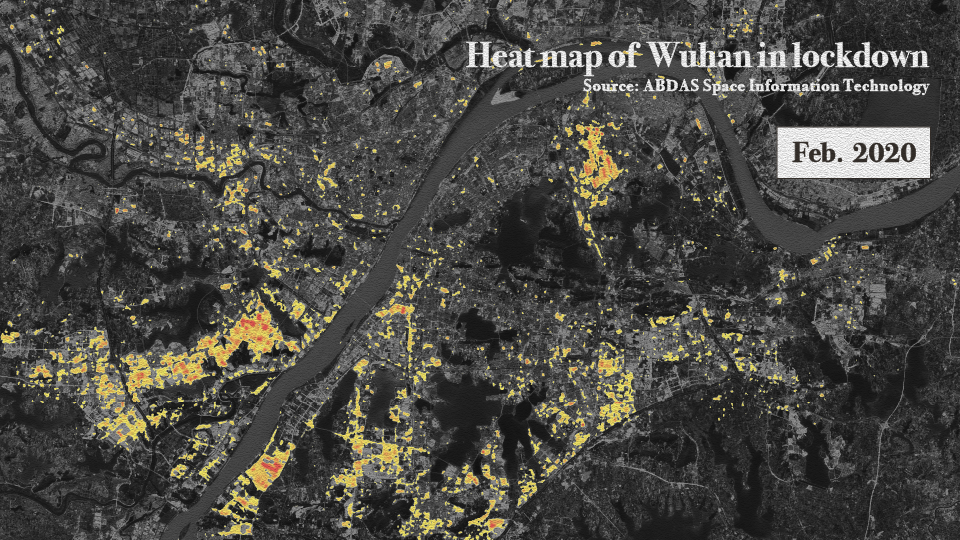 The area pictured, almost completely lacking in heat, is Qingshan District, known as the "Ten Mile Steel City." It's home to the famous Wuhan Iron and Steel Corporation. 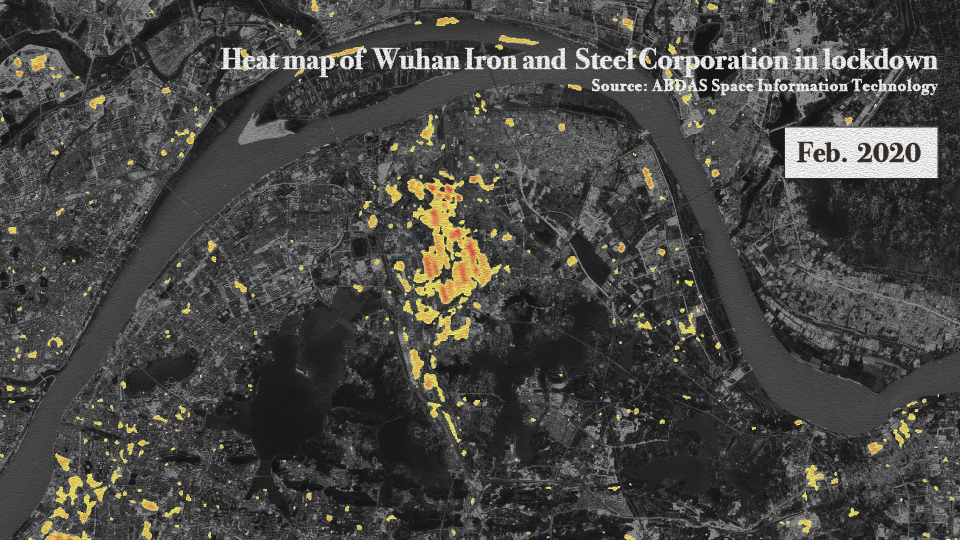 But by August, the industrial park significantly "warmed up" as it resumed operations. Another important industrial zone – Hanyang District also slowly regained its former vitality. The output growth of Wuhan's industries dropped a huge 39.7 percent in the first quarter of 2020. The city reopened in April, but the figure was still negative 6.9 percent for 2020, and has not yet recovered to the 4.4 percent growth level of 2019. The tough journey of Wuhan's industrial recovery indicates a long and bumpy road ahead for the city's overall economy. 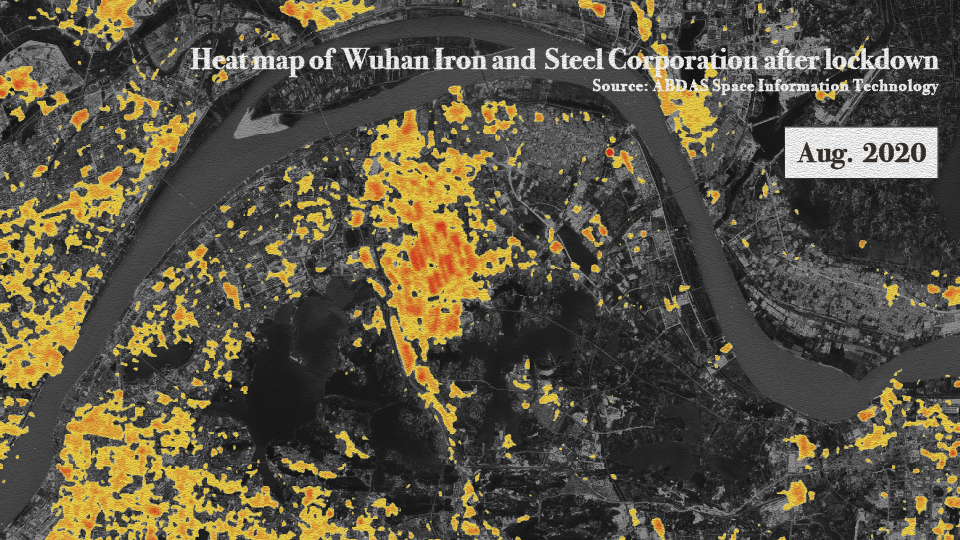 Like the industrial sector, Wuhan's service industry is also slowly ticking up. The number of orders placed by Wuhan's residents on the food delivery platform Eleme has still not returned to pre-pandemic levels. In many ways,  recovery in Wuhan has been more difficult than in other major cities in China.

During the lockdown last year, Wuhan's residents were extremely worried about their food supply. They purchased a lot of high-carb foods on Eleme such as peanuts, pancakes, corn, rice cakes, noodles and potatoes during the lockdown. After the lockdown, the foods that became the most popular included coffee and bubble tea, which indicates that the normal life in this city gradually returns. 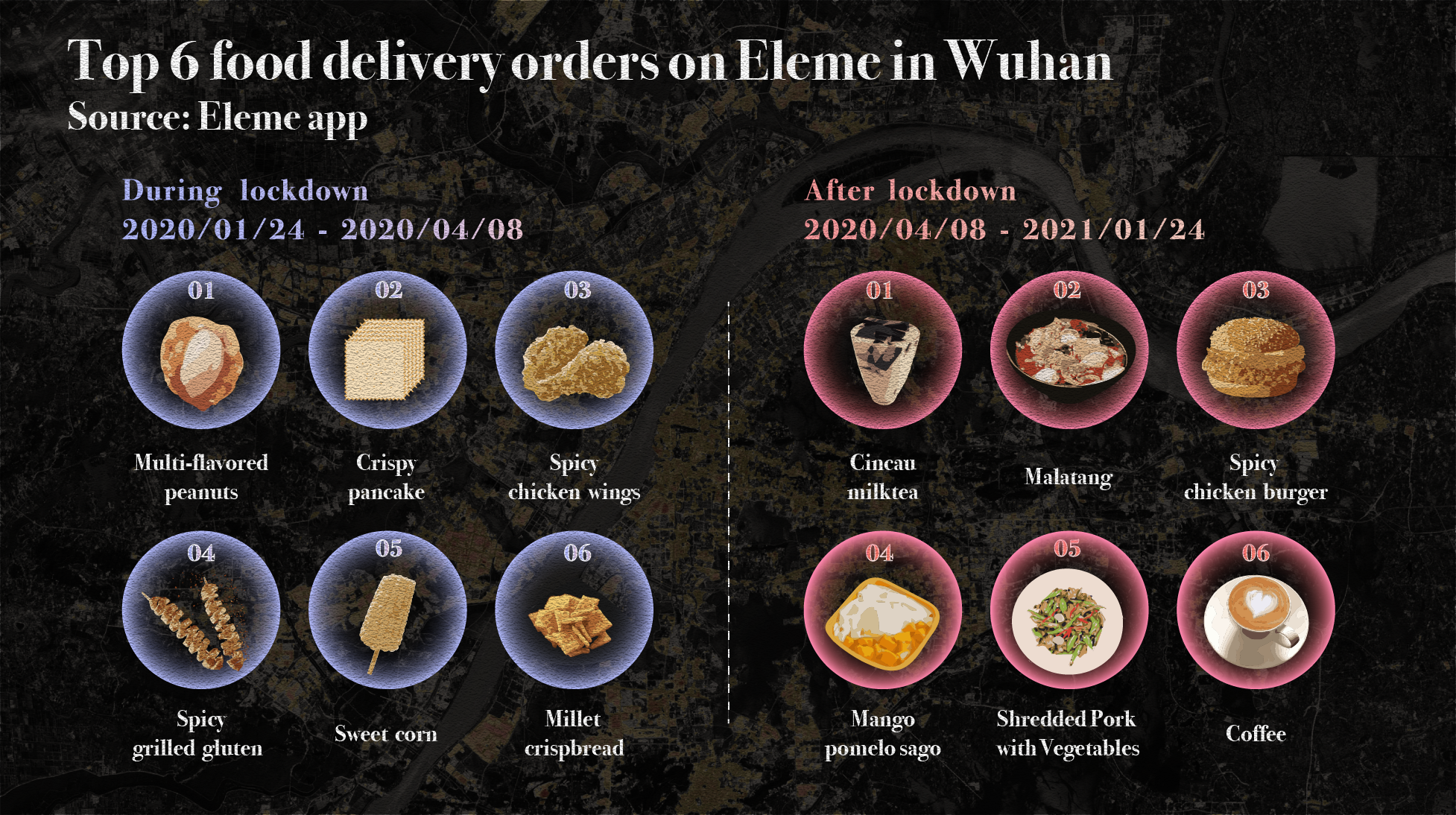 Food supply was a tough issue when the lockdown first started. The sowing, picking and transporting of produce encountered obstacles because of vehicle and personnel controls during the lockdown. During the summer, Wuhan was hit by heavy rainfall, which once again affected agricultural planting.

In 2020, total vegetable production in Wuhan fell by 5.9 percent year-on-year, but the decline rate has narrowed by 6.6 percentage points compared to the first half of the year.

Huangpi District is one of the important areas for supplying vegetables in Wuhan. An assessment of spring planting in Huangpi District using satellite images shows recovery is in progress. For example, in Qijiawan Street, although yellow and red areas indicating that vegetables and grains were not planted as scheduled remain, the majority is still green. 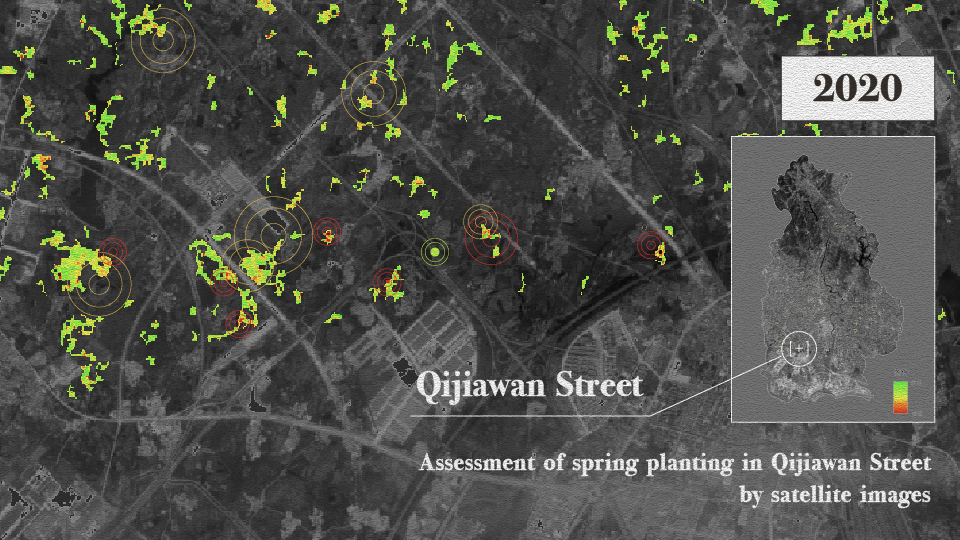 How does a city with a population of more than 10 million recover economically after a two-month lockdown? A rare positive indicator for Wuhan was the Optics Valley's GDP growth of 5.1 percent in 2020.

This is Wuhan's Optics Valley, an area of the high and new tech industrial cluster. It was deserted during the pandemic, but the traffic flow is now returning to pre-pandemic levels.

Emerging technology is the most promising field of Wuhan's development. In July 2020, the high-tech manufacturing industry grew by 26.2 percent, 27.2 percentage points higher than the total combined growth rate of the city's industries. 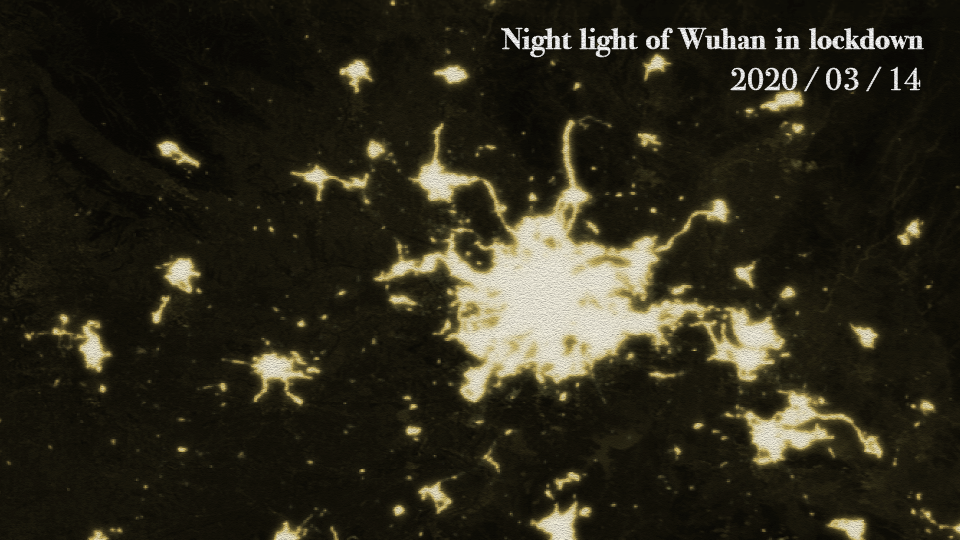 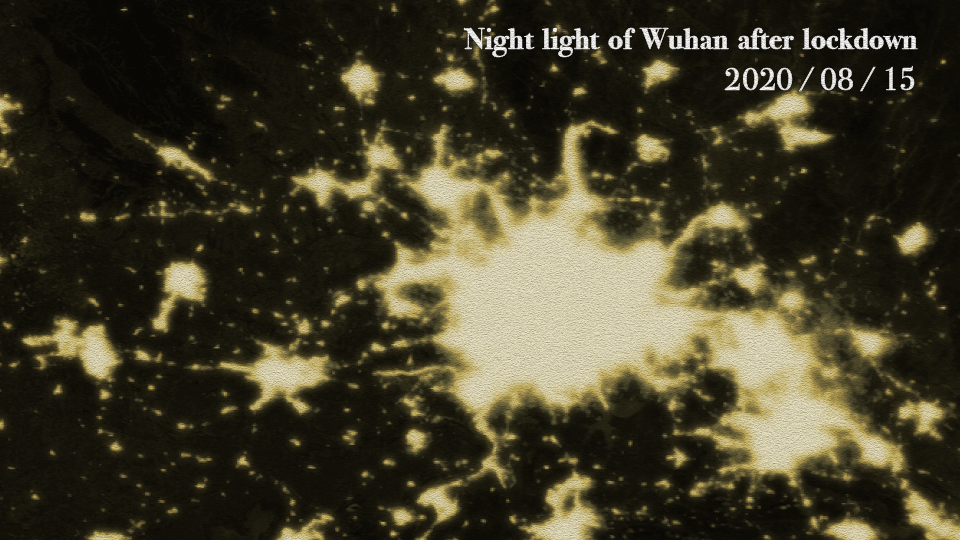 Wuhan's darkness on the satellite map at the start of 2020 represents the toughest time for China's economy; but its luminosity, which is increasing day by day, is also an indicator of China's brighter economic future.