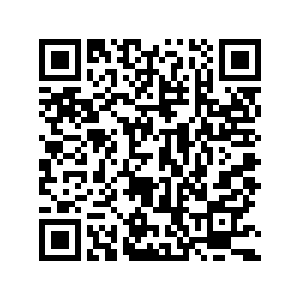 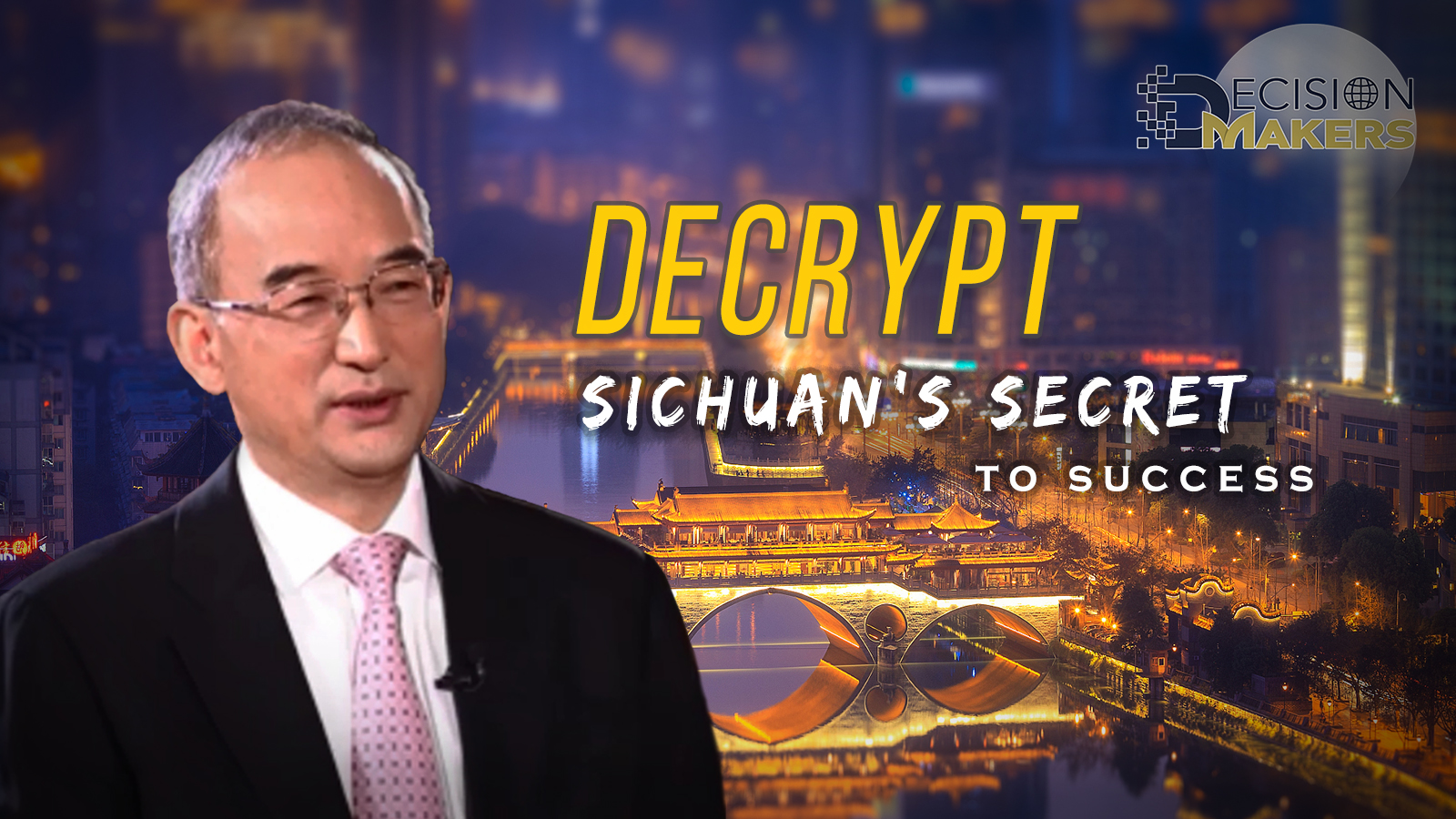 Editor's note: Decision Makers is a global platform for decision makers to share their insights on events shaping today's world. Huang Qiang is the governor of southwest China's Sichuan Province. The article reflects Huang's opinions, and not necessarily the views of CGTN.

Since the 18th National Congress in 2012, China's Sichuan Province has made remarkable economic and societal achievements. Last year, despite the need to control the pandemic, Sichuan's GDP hit 4.86 trillion yuan ($750 billion) with a growth rate of 3.8 percent, ranking sixth across China.

The province's determination to open further to the outside world is the reason behind its success.

Over 70 percent of Fortune 500 Companies have a presence in Sichuan. To maintain and enhance its global standing, Sichuan is dedicated to further improve its environment for foreign businesses. And an upgrade of transportation is key.

Since ancient times, Sichuan has been known for its poor transportation. Limited communication with the outside world has been a major hurdle in its development.

But today, Sichuan operates 130 international air routes. More than 16 percent of China's new railway trunk line will be built in the province, including the Sichuan-Tibet railway. There are 38 major passageways out of Sichuan. Its freight trains connect with 58 cities abroad. Last year, a total of 2,440 freight trains ran between Europe and Chengdu, capital of Sichuan, making it the top route in China for the fourth consecutive year.

Chengdu has 367 sister cities across the globe, and there are 20 consular offices in the Sichuan Province. The Tianfu International Airport will make Chengdu the third city after Beijing and Shanghai to have two international airports, and the only one with a direct link between the two facilities. 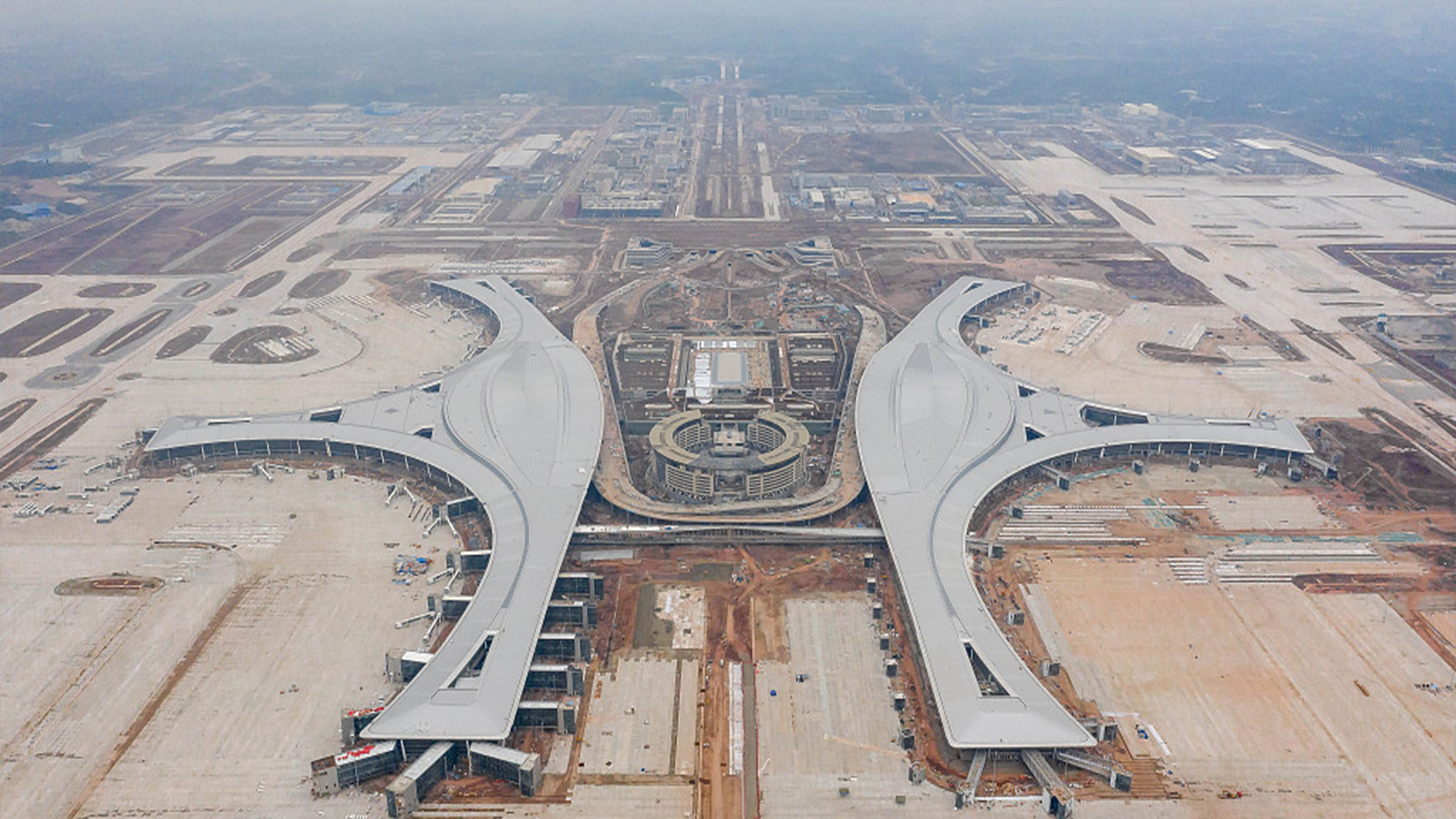 An aerial view of Tianfu International Airport, which is in trial in Chengdu, Southwest China's Sichuan Province. /CGTN

An aerial view of Tianfu International Airport, which is in trial in Chengdu, Southwest China's Sichuan Province. /CGTN

In addition, China's 14th Five-Year Plan has presented Sichuan with unprecedented strategic opportunities. It is worth noting that China is placing a great deal of focus on city clusters. The Chengdu-Chongqing dual-city economic circle is a major national strategy tailored to the region's development. We have established a coordination mechanism with Chongqing dedicated to the following three aspects.

First, faster transportation. In December last year, we upgraded the Chengdu-Chongqing High-Speed Railway to better serve commuters. Now, people can travel between the two cities in just one hour. This year, we will begin construction on another high-speed railway. Once completed, the travel time between the two cities will be cut to fewer than 45 minutes.

Second, closer collaboration between different industries. We broke the boundaries of administrative divisions and set up some new provincial-level districts. We've also set up demonstration zones in the areas adjacent to Sichuan and Chongqing. Together, we are building world-class project clusters.

Third, more convenient life for the public. Last year, a mechanism was launched to streamline procedures for administrative affairs. In the past, it took more than 10 days for people to transfer their household registration due to back-and-forth travel between Sichuan and Chongqing. Now, it can be done in just 10 minutes, in either city. This year, we aim to launch more procedures to make things easier. 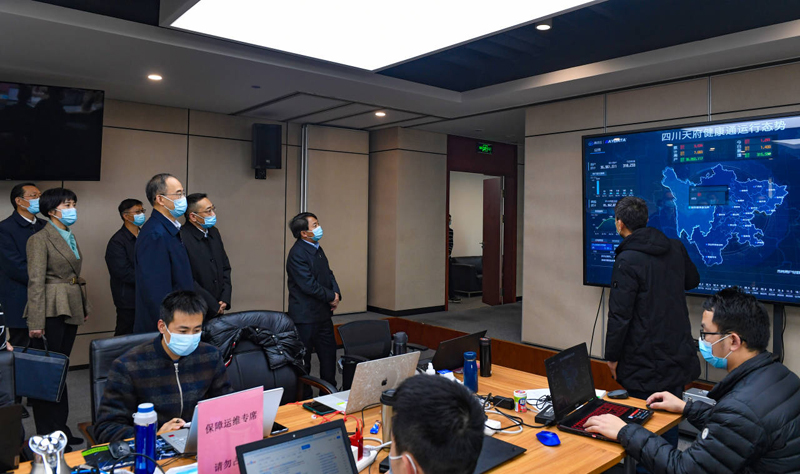 The ultimate purpose of attracting foreign investments is to benefit people. To further boost people's livelihood, Sichuan has drafted a plan for the next five years covering five key areas.

First, bringing economic growth to a new level. We plan to set an average annual growth rate of 6 percent, with the goal of surpassing 6 trillion yuan. That's 2 trillion yuan more than the current level.

Second, making new breakthroughs in transportation and other infrastructure. China's newly released outline of a national multidimensional transport network, for the first time, places Chengdu and Chongqing as a regional pillar, along the likes of the Yangtze River Delta region, the Guangdong-Hong Kong-Macao Greater Bay Area, and the Beijing-Tianjin-Hebei region. We will seize this opportunity to speed up the upgrade of our transport network.

Third, pushing forward rural vitalization. Last year, Sichuan had a grain output of 35 billion kilograms and more than 56 million pigs were sold. In the next five years, our top priorities will be consolidating Sichuan's position as an agricultural powerhouse.

Sichuan was one of the poorest provinces in the country and inconvenient transportation is the main reason. Industrial revitalization is significant to rural vitalization.

Fourth, working to protect ecology and the environment. With its location on the upper reaches of the Yangtze and Yellow Rivers, Sichuan is an important ecological barrier for the country. We should stick to the path of green development and win the battle against pollution.

Fifth, improving people's well-being. In the next five years, we aim to increase investment in improving livelihoods; solve problems in employment, healthcare and education; and prioritize issues the public is most concerned about in order to give people a better sense of happiness, fulfillment and security.

China's 14th Five-Year Plan means tremendous opportunities for Sichuan. The province is determined to seize it for expanded communications with the outside world, improved economic performance, and better livelihood for people in the region.