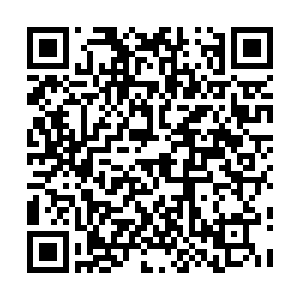 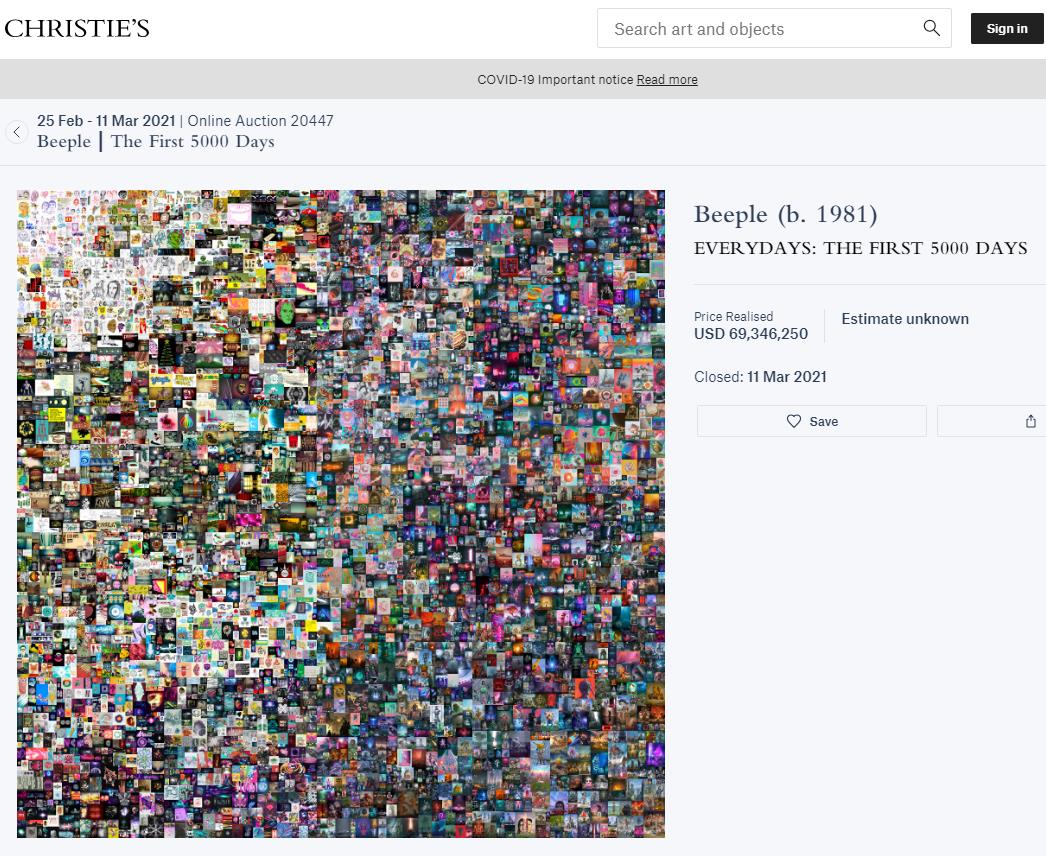 A digital collage "Everydays: The First 5,000 Days" by American artist Beeple was sold for a record $69.3 million at Christie's auctioneers on Thursday. /Christie's

A digital collage "Everydays: The First 5,000 Days" by American artist Beeple was sold for a record $69.3 million at Christie's auctioneers on Thursday. /Christie's

A digital collage by American artist Beeple sold Thursday for a record $69.3 million at Christie's auctioneers, as virtual art rapidly establishes itself as a new – and highly profitable – creative genre.

"Everydays: The First 5,000 Days" became the most expensive ever "non-fungible token" (NFT) – a collectible digital asset that uses blockchain technology to turn virtual work into a unique item.

Christie's said Beeple, whose real name is Mike Winkelmann, is now among the top three most valuable living artists in any medium alongside Jeff Koons and David Hockney.

The 39-year-old artist said that his work, on a JPEG, had "as much craft, message, nuance and intent as anything made on a physical canvas."

"Artists have been using hardware and software to create artwork and distribute it on the internet for the last 20+ years but there was never a real way to truly own and collect it. With NFTs that has now changed," he added.

"I believe we are witnessing the beginning of the next chapter in art history."

"Everydays" was the first purely digital NFT work of art to go under the hammer at a major auction house. Its buyer has not been publicly identified.

The collage is based on a project beginning on May 1, 2007, when Beeple was a bored web designer and started to create a work of art each day, without interruption, to improve his drawing and graphic design.

After 5,000 consecutive days, "Everydays" brought together his daily pieces in digital form, beginning with a simple image of his Uncle Jim and ending on a detailed graphic portrait of characters from Donald Trump to Buzz Lightyear to Michael Jackson, depicted as dystopian muses around a child drawing.

Since 2007, Beeple has accumulated nearly two million Instagram followers and collaborated with major brands and famous musicians, attracted by his imaginative graphic universe.

But he had never sold any work under his own name until recently, when the new technology catapulted him into orbit as one of the most fashionable artists in the world.

NFTs have a documented provenance that cannot be altered, guaranteeing authenticity and making the work ownable – in contrast to most material on the internet where content is easily duplicated.

"Beeple's success is a testament to the exciting possibilities ahead for this nascent marketplace. Today's result is a clarion call to all digital artists. Your work has value," said Noah Davis, a contemporary art specialist at Christie's.

The auction house said a record 22 million people watched the dramatic final minutes of the two-week sale as the price rocketed among competing bidders from 11 countries.

Todd Levin, a New York art advisor, told The New York Times that he had mixed emotions about the sale.

"On the one hand, it's super exciting to witness a historical inflection point," Levin said. "On the other hand, the amount of money involved could skew and damage a nascent emerging market."

At the end of February another of Beeple's works, "Crossroads," was resold for $6.6 million on the platform Nifty Gateway, which specializes in virtual works. Beeple, from Charleston, South Carolina, received a 10-percent cut.

And an animation that he himself had sold at the end of October last year for a symbolic dollar was recently acquired for $150,000.

Though bewildering to many, a manic appetite for virtual objects authenticated through blockchain technology has spread through different markets.

Twitter boss Jack Dorsey is selling his first tweet, from back in 2006, which reads "just setting up my twttr," at an ongoing auction, with bidding reaching $2.5 million.