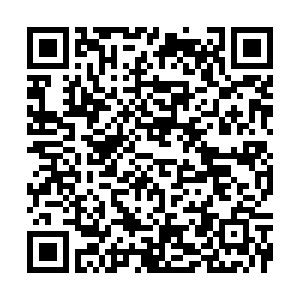 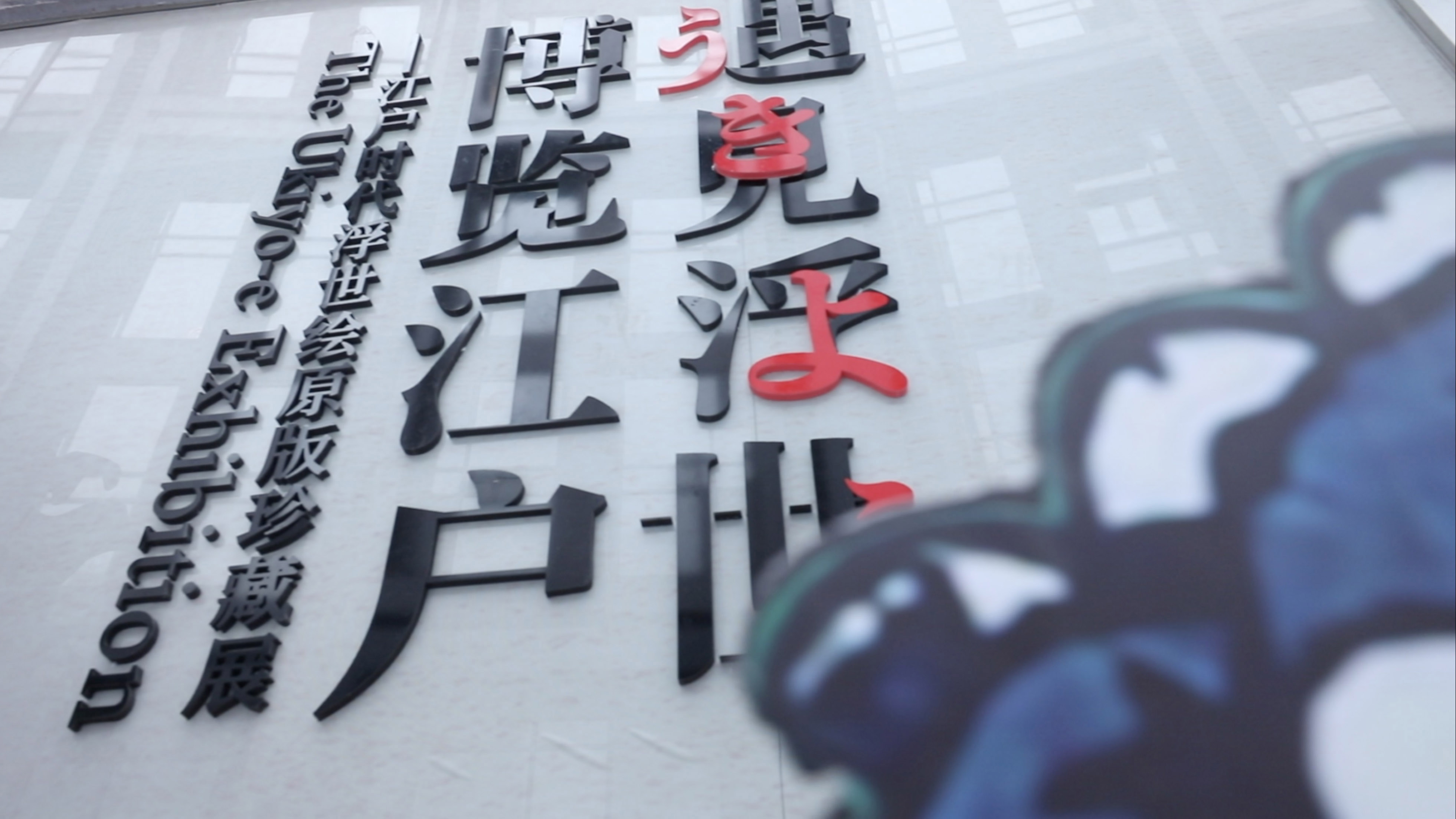 "Meeting Ukiyo-e: A Floating World of Edo City," A Ukiyo-e themed exhibition jointly produced by Art Exhibition China, the Embassy of Japan in China and China Cultural Tourism and Creativity, is on display at the Today Art Museum in Beijing from March 12 to May 6, 2021. The exhibition showcases nearly 100 original Ukiyo-e paintings from the Edo Period (1603-1868) and Meiji Period (1868-1912) that have never been exhibited in China. The exhibited works include an 1832 edition of "The Great Wave off Kanagawa" from Japanese Ukiyo-e painter and printmaker Hokusai Katsushika.

Ukiyo-e is a genre of Japanese art that flourished from the 17th through 19th centuries. Its artists produced woodblock prints and paintings of such subjects as female beauties, kabuki actors, sumo wrestlers, scenes from history, folk tales, travel scenes and landscapes and flora and fauna. The term "Ukiyo-e" means "picture of the floating world."

During the Edo Period, Ukiyo-e, as an art form to record the daily life of the common people, was highly sought after by the people of the time for its down-to-earth style and content.

It is not difficult to collect popular Ukiyo-e works because of the large number of releases. However, to truly understand the Ukiyo-e works, it is necessary to understand the history of Ukiyo-e, the masterpieces of the artists and distinguish the editions of different eras.

Generally speaking, the Ukiyo-e original editions, or early editions, are now primarily kept in important museums. Due to their age, the paper and pigments are easily affected by the surrounding exhibition environment, so they are extremely valuable. 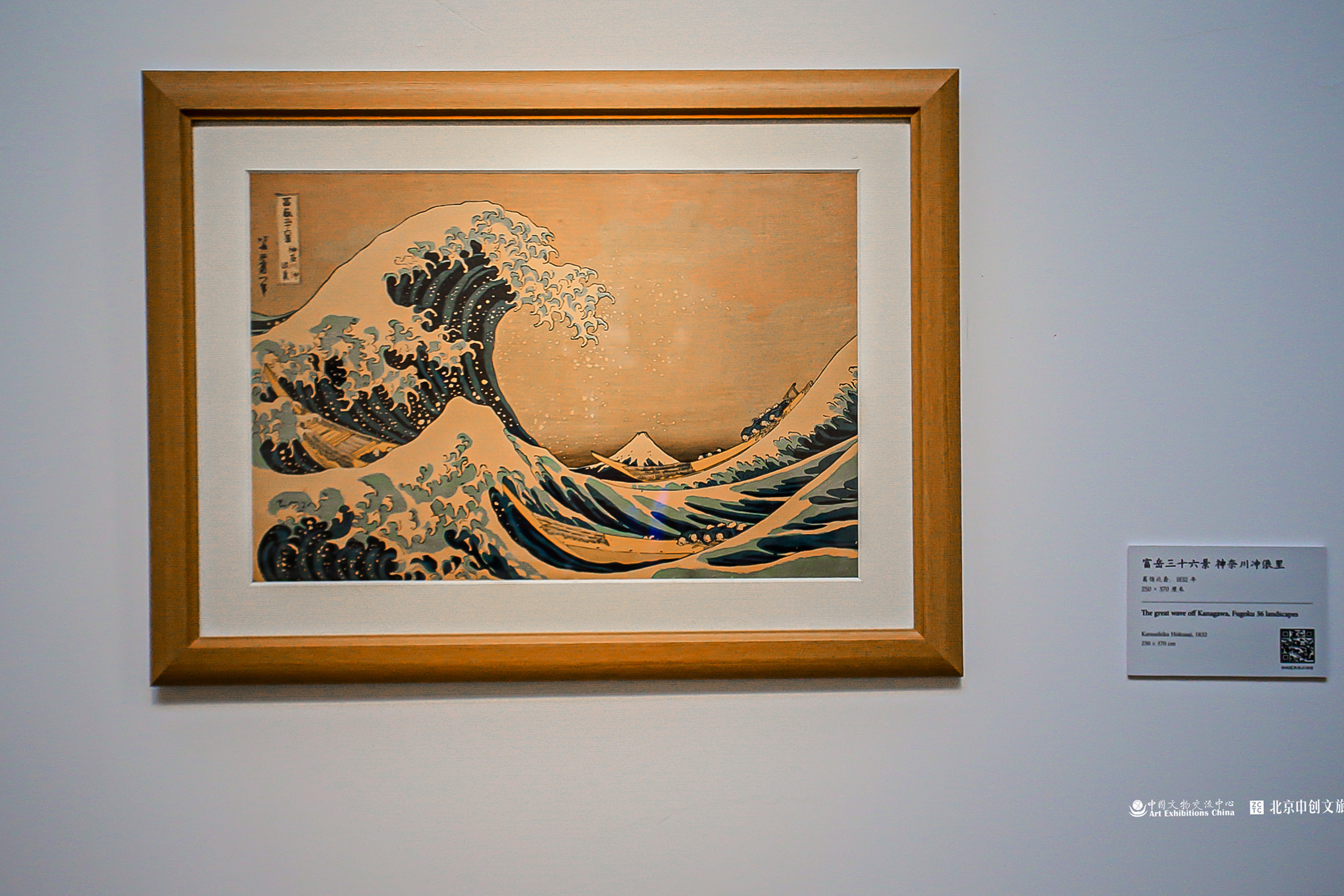 "The Great Wave off Kanagawa," Japan's most frequently printed Ukiyo-e belongs to the series of "Thirty-Six Views of Mount Fuji." /Art Exhibition China

"The Great Wave off Kanagawa," Japan's most frequently printed Ukiyo-e belongs to the series of "Thirty-Six Views of Mount Fuji." /Art Exhibition China

One of the most widely known works in the exhibition is "The Great Wave off Kanagawa," Japan's most frequently printed Ukiyo-e belonging to the series of "Thirty-Six Views of Mount Fuji." The work is regarded as a symbol of Japanese Ukiyo-e and is one of Hokusai's most famous works.

Although most of the work has now been destroyed by natural and man-made disasters, a few good versions survive in museums around the world, such as the British Museum and the Tokyo National Museum. "The Great Wave off Kanagawa" was published sometime between 1829 and 1833. The 1832 version of the work is currently on display in Beijing.

The other works in this exhibition, for example, "Fine Wind, Clear Morning," also belong to the series of "Thirty-Six Views of Mount Fuji," which is referred to as "Red Fuji" by people. It is also a work that people cannot avoid when speaking of Ukiyo-e.

Although exhibitions under the theme of Ukiyo-e are common at home and abroad, this exhibition presents important Ukiyo-e works, such as "The Great Wave off Kanagawa" and "Fine Wind, Clear Morning," showcases many pieces that reflect the social features, customs, life and folklore of the Edo Period from the perspective of urban culture for the first time.

Naoto Ito, cultural counselor of the Embassy of Japan in China, recommended several works with a festive atmosphere that he felt could show the style of Japan at that time. 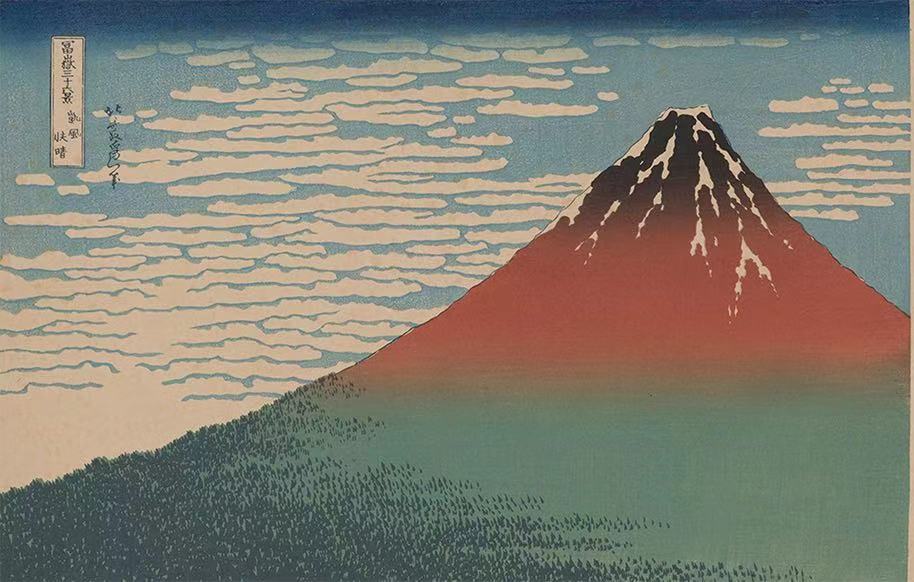 "I would like to invite people to have a look at the works that portray the real-life experiences of ordinary people at the time. This is not one painting but a set of works. In this group, there are five pictures about the traditional festivals in Japan. They are New Year's Day on January 1, Girls' Day on March 3, and Dragon Boat Festival on May 5, which is Boys' Day now, and so on. In my opinion, I am also very interested in the works that showcase the activities of the traditional Japanese festivals, and I can recommend them to our Chinese friends," said Ito.

Zhou Ming, deputy director of Art Exhibitions China, said the collection is quite distinct from what had been exhibited in China earlier. Through this display, people can see that this collector pays more attention to the scenery of the four seasons, the urban architecture, and the life of ordinary people.

"I think the Chinese audience will love it," he said.

Despite the effects of the COVID-19 pandemic, some art insiders expect a good showing.

"Because the situation is gradually recovering, I believe exchanges like this exhibition will be very productive," said Zhou Ming.

Ito also expressed that although it is difficult to invite relevant people from Japan to China, and they will continue to discuss how to combine online and offline two-way communication channels in the future.

It also means that art lovers in Beijing or even across the whole country will welcome more excellent Chinese and foreign art fairs in the second half of the year. Qiu Tong, CEO of China Cultural Tourism and Creativity, said in the second half of the year, art lovers in Beijing will also have the chance to enjoy Dunhuang art, Egyptian culture and more world-class works from Italian painter Raphael.

The Ukiyo-e exhibition runs until May 6 in Beijing.