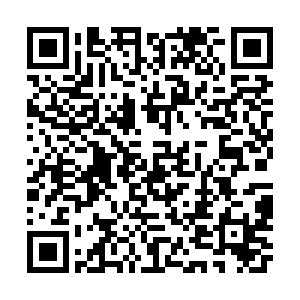 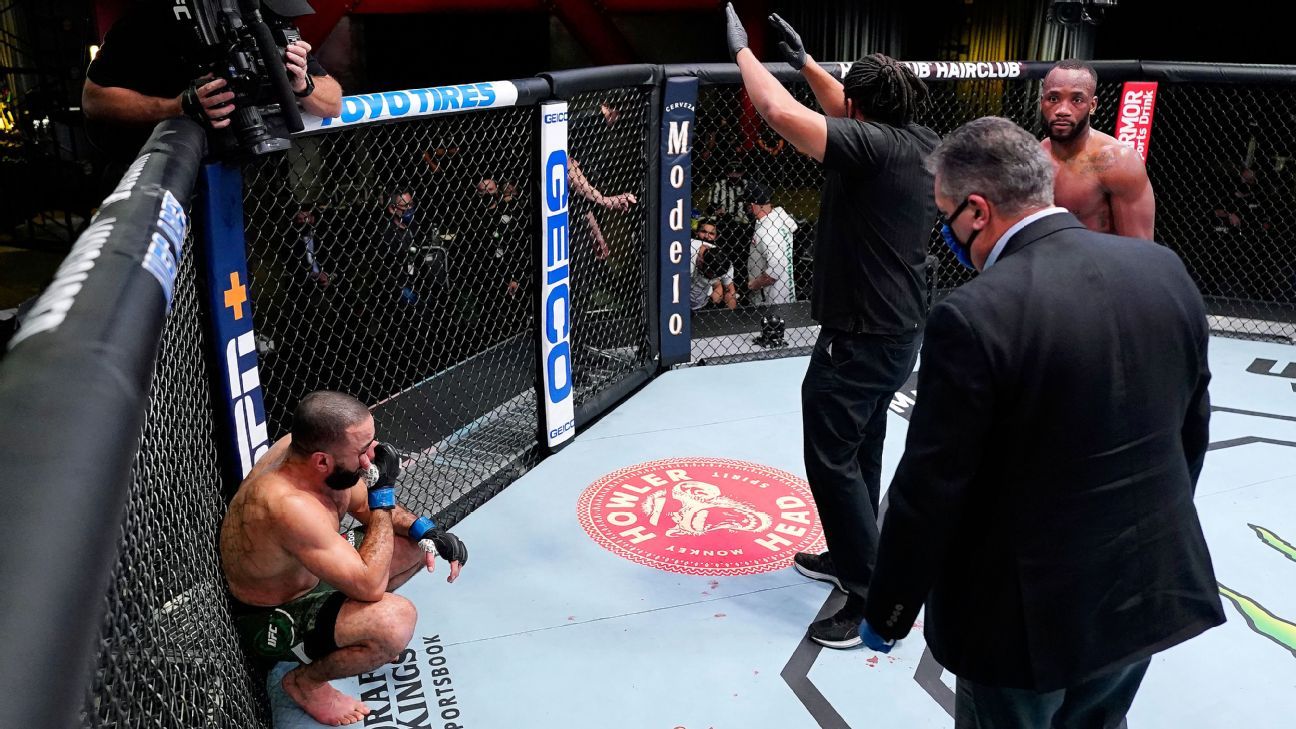 Leon Edwards cannot catch a break. He arrived in the UFC in 2014 with the reputation as being the next big thing out of England and, in true UKMMA style lost two of his first four fights. Following that loss to current welterweight champion Kamaru Usman, something changed in him.

He won his next eight, fighting twice per year. Edwards also improved exponentially between every time, peaking with a sensational five round decision win over Rafael dos Anjos that pumped him up to third in the welterweight rankings.

Then the pandemic hit. He was intended to face ex-UFC Welterweight champion Tyron Woodley in the main event of a UFC Fight Night in London on March 31, 2020. Not only was the event cancelled, the ensuing travel restrictions made it impossible for British-based Edwards to travel to the UFC Apex in Las Vegas or Fight Island in the UAE for a replacement bout.

After over a year without a scheduled fight, Edwards was booked against Khamzat Chimaev. The Chechen newcomer had leapfrogged while Edwards was out; he'd beaten John Phillips, Rhys McKee and Gerald Meerschaert in a combined four minutes 38 seconds and the UFC needed to see if the hype was real by booking him against a legitimate title contender like Leon Edwards.

In November 2020, three weeks before the Edwards vs. Chimaev event, Chimaev tested positive for COVID-19; on December 1, 2020, Edwards also got COVID-19. The bout was postponed until January to give both men time to recover. 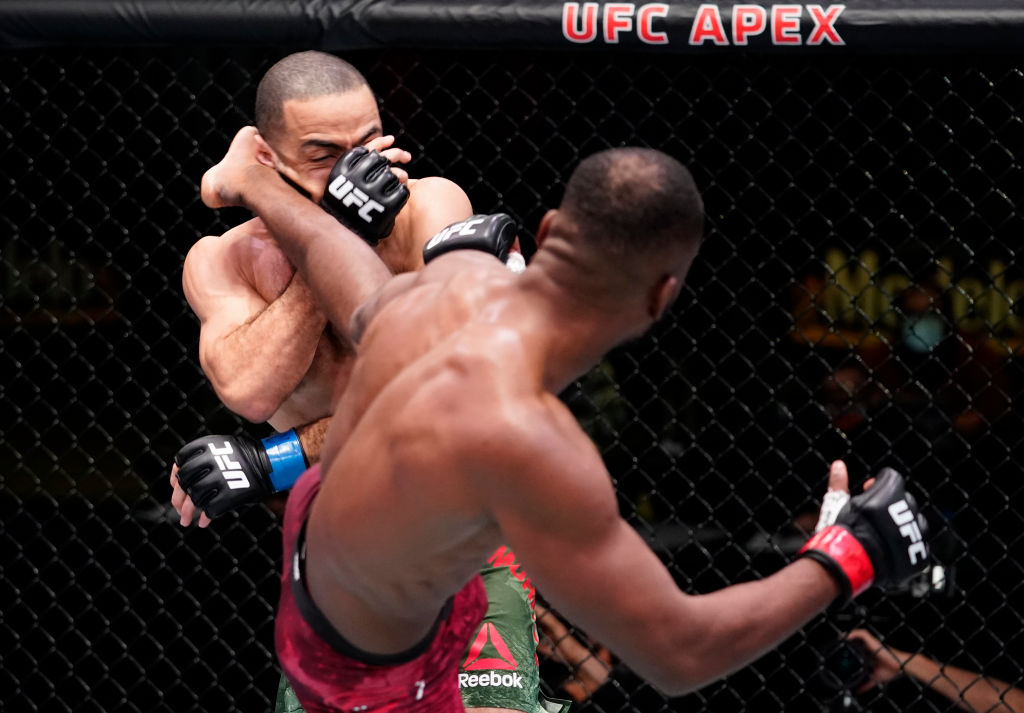 Leon Edwards (front) hits Belal Muhammad with a headkick during the welterweight main event of UFC Vegas: Edwards vs. Muhammad at the UFC Apex, March 13, 2021. /Zuffa

Leon Edwards (front) hits Belal Muhammad with a headkick during the welterweight main event of UFC Vegas: Edwards vs. Muhammad at the UFC Apex, March 13, 2021. /Zuffa

Edwards did, Chimaev didn't. The bout was postponed yet again, now until a UFC Vegas event on March 14, 2021, and officially cancelled in February when Chimaev's condition didn't improve. In fact, he retired from MMA on March 1 citing lung damage caused by COVID-19.

Instead of postponing or cancelling another event, Edwards was given another opponent: #13 Belal Muhammad. His situation couldn't have been more opposite. By the time of their fight, Edwards would have been inactive for 600 days, Muhammad for exactly a month. He had a simple decision win over Dhiego Lima at UFC 258 on February 11 and wanted a quick turnaround.

Finally, it was all set. Edwards would be making his return to the Octagon looking to prove he was still worth the #3 ranking and Muhammad would see if he could copy his rival's quick rise up the rankings with a big win.

There was a lot to live up to, particularly after the weigh-ins when a quick trash-talking aside from Edwards ramped this up from a unique ranked bout to a matter of respect. There were no touching gloves, no eye contact before the bell.

Muhammad began as he likes to do by pushing forward, only Edwards gave no quarter and this seemed to confuse him. It looked like this would be an intense fight but less than 30 seconds in, Edwards' refusal to give his opponent space forced things into a more standard mode.

Quickly, Edwards found his range. Both men were throwing light, the difference was that Muhammad's style of big, powerful hooks is far less efficient than Edwards' use of straights; both his punches and kicks go directly forward and then back, as if his style is a cross between kickboxing and point karate. 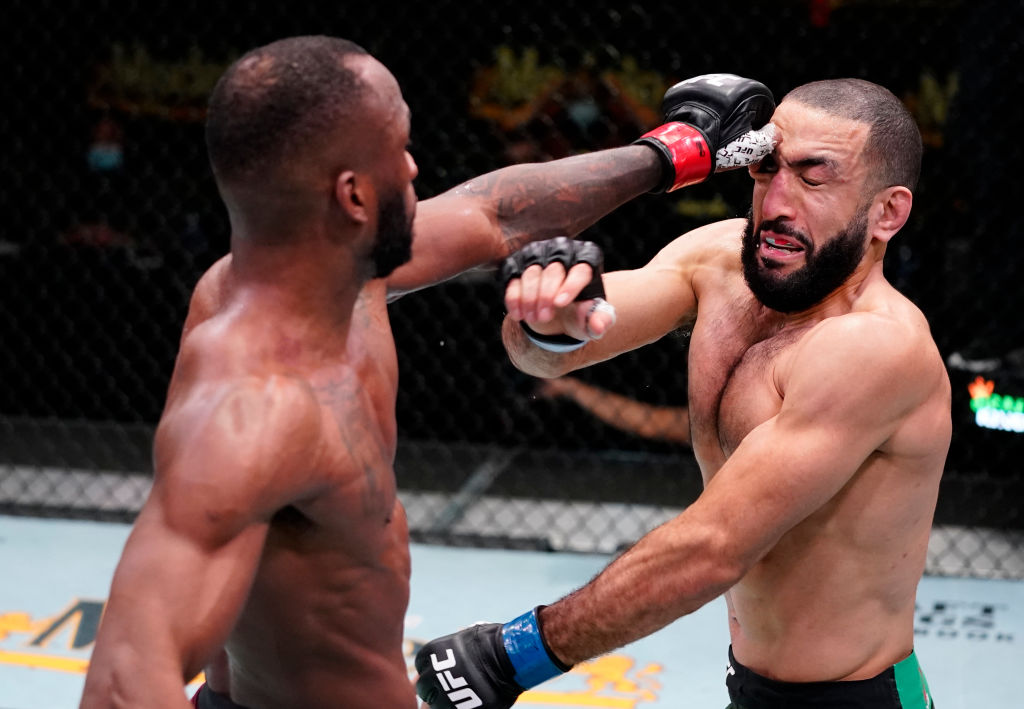 Leon Edwards (L) pokes Leon Edwards in the eye by accident during the welterweight main event of UFC Vegas: Edwards vs. Muhammad at the UFC Apex, March 13, 2021. /Zuffa

Leon Edwards (L) pokes Leon Edwards in the eye by accident during the welterweight main event of UFC Vegas: Edwards vs. Muhammad at the UFC Apex, March 13, 2021. /Zuffa

A quick clinch later, Edwards dropped back to the center of the Octagon and started to get fancy. Everybody was wondering what condition he would be in after almost two years away from fighting and, half a round in, it looked as if he too was trying to answer that question. Across 150 seconds, he'd evolved from testing straights to basic grappling to headkicks and looping punch combinations.

Edwards wasn't just back – he hadn't missed a step. Muhammad had to go on the defense to prevent being knocked out. The 10-place difference in the rankings appeared to be justified. For the rest of the round, he couldn't do anything of note and the cut that had formed on the right side of his head appeared to be growing into a bullseye during the final minute.

In Round 2, both men came out swinging and moments into it, as Edwards chambered a body kick, he stuck his left arm forward to build momentum. Muhammad leaned in to throw a punch and Edwards' finger went deep into his right eye.

Muhammad dropped to the ground in agony. In the silence of the UFC Apex, the microphone picked up his screams. Referee Herb Dean stopped the fight while the doctor came in to check but it was clear it couldn't continue. Muhammad said he couldn't see and the fight was waved off as a No Contest.

Almost two years of inaction from Leon Edwards and an accidental eye poke means the questions over his place in the welterweight division continue. Belal Muhammad, outmatched but acquitting himself well, will now be out of action for a long time. And it's all down to an accident. It couldn't have been more disappointing for everyone involved.