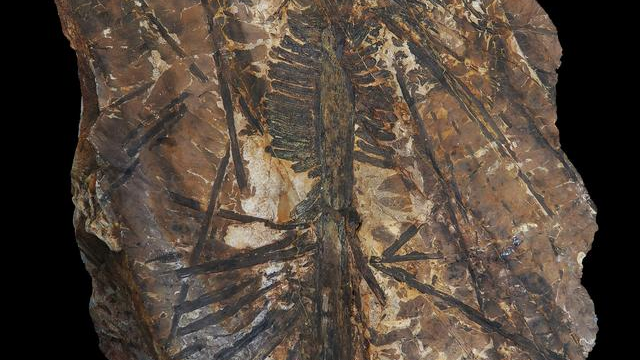 A photo of Paratingia wuhaia fossil from Nanjing Institute of Geology and Palaeontology, Chinese Academy of Sciences. /Xinhua

A photo of Paratingia wuhaia fossil from Nanjing Institute of Geology and Palaeontology, Chinese Academy of Sciences. /Xinhua

An international research team led by Chinese scientists has discovered tree fossils dating back 300 million years in a coalfield in north China's Inner Mongolia Autonomous Region, announced the Nanjing Institute of Geology and Palaeontology under the Chinese Academy of Sciences on Monday.

The species, Paratingia wuhaia, with fruit clusters similar to pine cones and leaves similar to fir leaves, was one of the main plants that formed coal. The area in which the fossils were found was a marshy forest about 300 million years ago, said Wang Jun with the institute, also the leader of the research.

A sudden and massive volcanic eruption fossilized a large number of ancient plants in the area, including the Paratingia wuhaia trees, he added.

The species is a transitional plant between spore plants and gymnosperms. It survived for 110 million years after the emergence of advanced seed plants. The species, together with other plants in swamp forests, formed the coal.

The study was published in the journal of Proceedings of the National Academy of Sciences of the United States of America (PNAS).