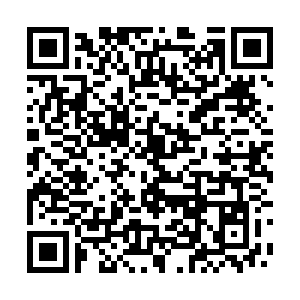 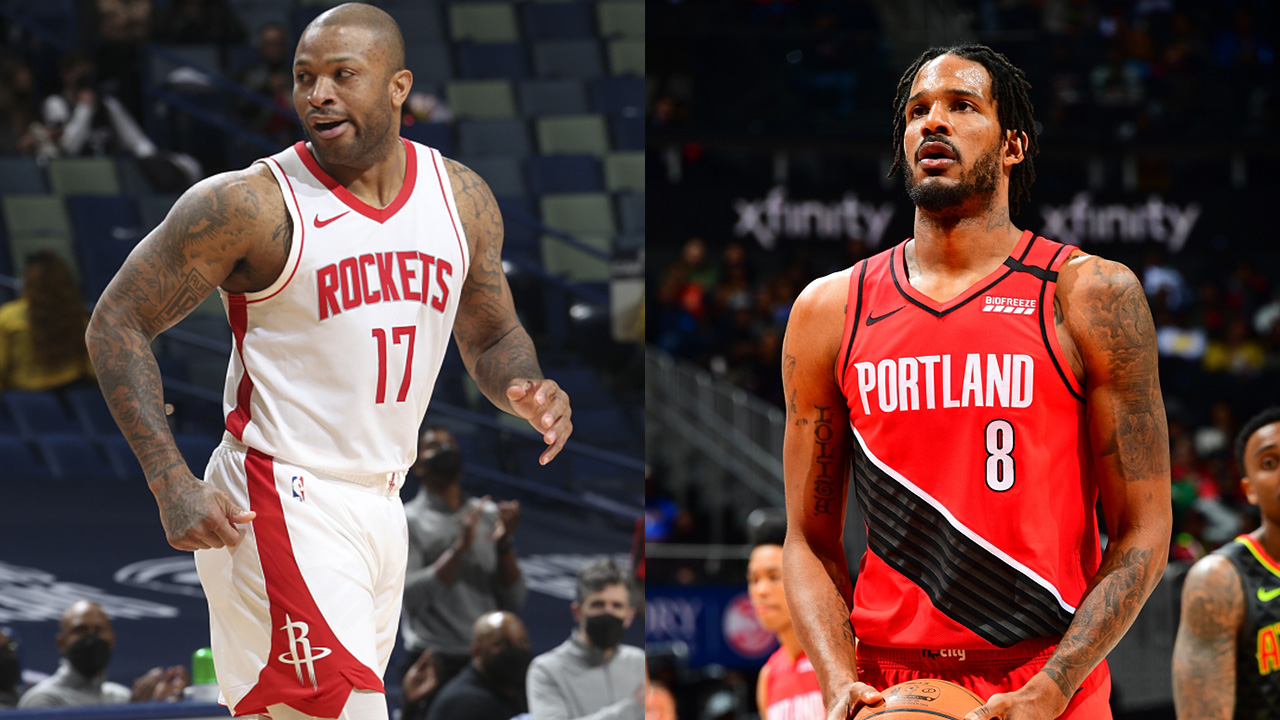 P.J. Tucker (L) of the Houston Rockets and Trevor Ariza of the Portland Trail Blazers. /CFP

P.J. Tucker (L) of the Houston Rockets and Trevor Ariza of the Portland Trail Blazers. /CFP

The Houston Rockets and the Milwaukee Bucks agreed on a trade which will saw P.J. Tucker, Rodions Kurucs and a 2022 first-round draft pick (which was the Bucks' at the beginning) go to Milwaukee. Meanwhile, Houston will acquire D.J. Augustin, D.J. Wilson, a 2023 unprotected first-rounder and 2021 swap rights. The Phoenix Suns got involved as well and landed Torrey Craig from Milwaukee.

It was definitely the right move for the Bucks introducing Tucker. The team's defensive strategy in the regular season was to keep Brook Lopez under the rim and have Giannis Antetokounmpo sweep the floor. Such arrangements were destroyed by the Miami Heat in the postseason for several reasons. First, the Heat were too hot from downtown; second, Antetokounmpo had to defend Jimmy Butler, leaving Lopez vulnerable in front of the screen plays by Goran Dragic; third, neither Ersan İlyasova nor Marvin Williams of Bucks' the small-squad was tough enough at playoff level. 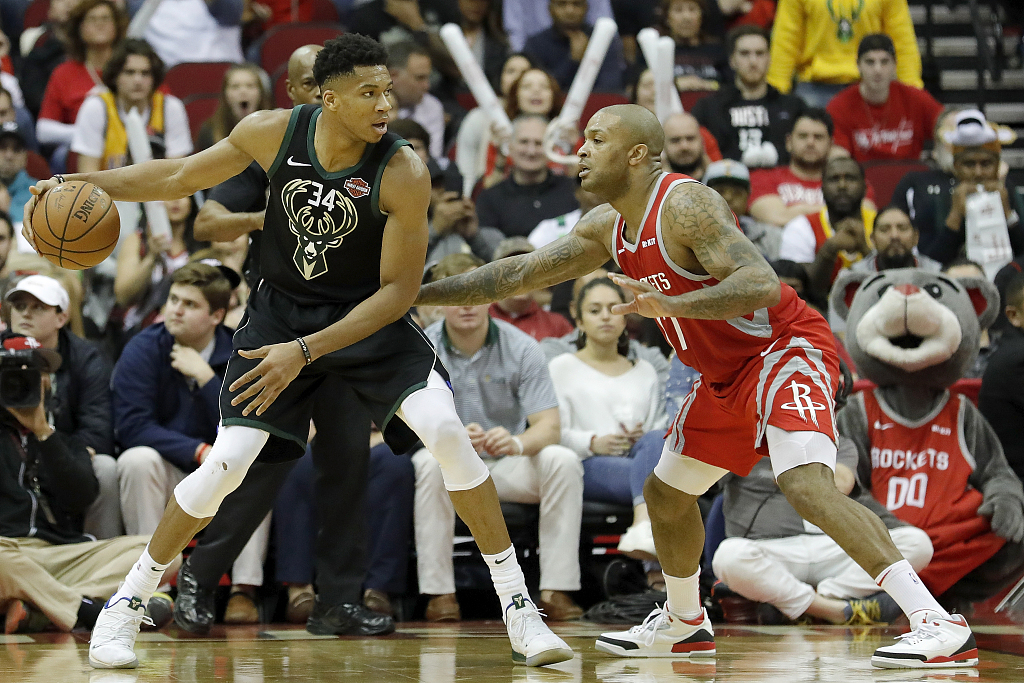 P.J. Tucker (R) of the Houston Rockets defends Giannis Antetokounmpo of the Milwaukee Bucks in the game at Toyota Center in Houston, Texas, U.S., January 9, 2019. /CFP

P.J. Tucker (R) of the Houston Rockets defends Giannis Antetokounmpo of the Milwaukee Bucks in the game at Toyota Center in Houston, Texas, U.S., January 9, 2019. /CFP

The Bucks defense took a further hit as both Ilyasova and Williams left during the offseason. That's why the team was desperate for a guy who can swing between power forward and center. Since Aaron Gordon of the Orlando Magic and John Collins of the Atlanta Hawks are apparently out of their price range, Tucker became the best option for the Bucks.

Tucker can become a defensive solution to the team. He was playing a key defensive role under the switch-everything concept during the Rockets' two uphill series against the Golden State Warriors in 2018 and 2019. At 1.96 meters, he is dynamic enough to cover a series of different players from Stephen Curry to Kevin Durant. Moreover, his defensive skills and strength qualify him to step in as a center during the clutch-time, small-ball lineup. 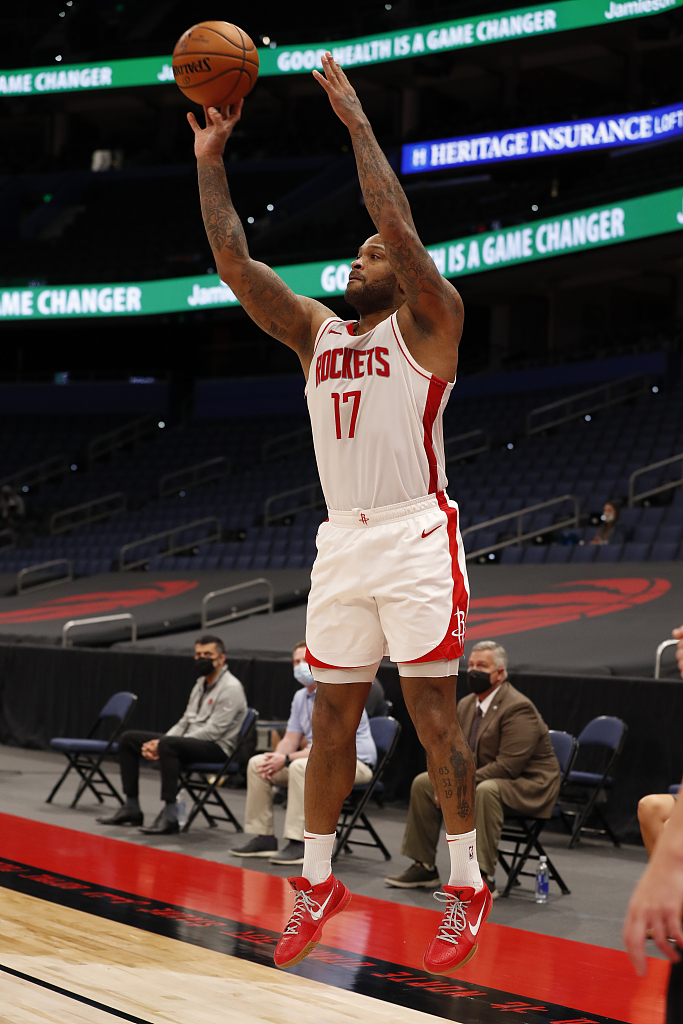 P.J. Tucker of the Houston Rockets shoots in the game against the Toronto Raptors at Amalie Arena in Tampa, Florida, U.S., February 26, 2021. /CFP

P.J. Tucker of the Houston Rockets shoots in the game against the Toronto Raptors at Amalie Arena in Tampa, Florida, U.S., February 26, 2021. /CFP

There may be a question mark on Tucker's offense. His most important and probably only job on the Rockets was to shoot corner threes. Thanks to the existence of James Harden (and Chris Paul), Tucker could receive a lot of opportunities in the two corners, which enabled him to remain around 35 percent in the past four seasons. Nonetheless, having played 32 games so far this season, Tucker has only knocked down 31.4 percent of his shots from beyond the arc.

The Bucks will need him to do better than that because nothing matters more than spacing to the team.

On the Rockets' side, Wilson was not in the Bucks' main rotation, so the Rockets won't expect much from him. Augustin's case is more interesting. The Rockets will be the 10th team he has played for in his 13-year career. Augustin is not a star, but he can fit in different squads and styles very soon. 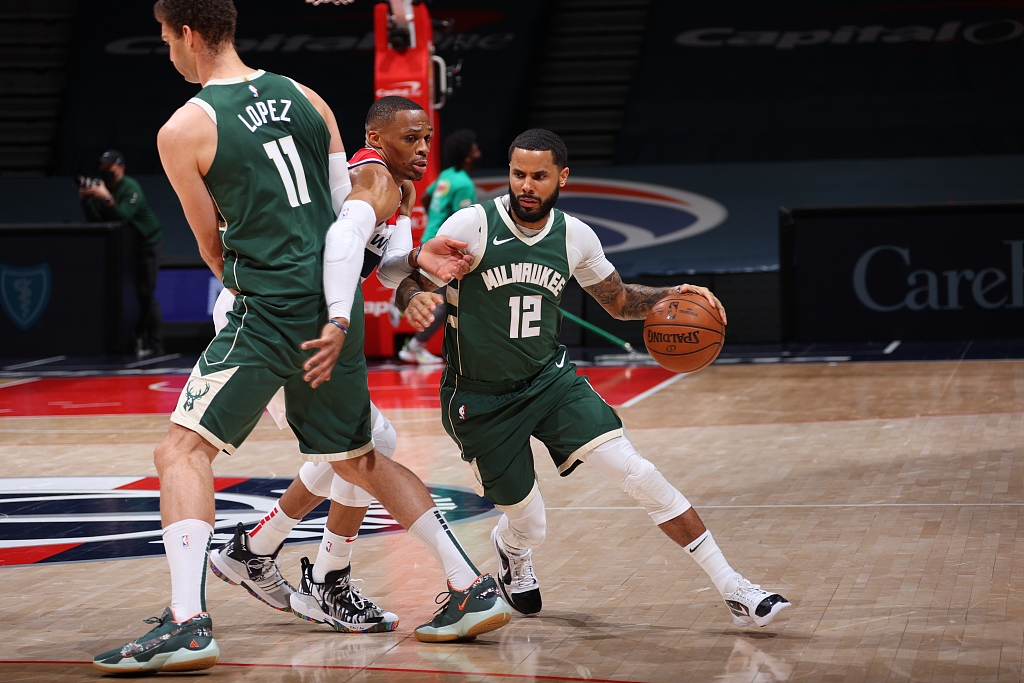 D.J. Augustin (#12) of the Milwaukee Bucks tries to penetrate in the game against the Washington Wizards at Capital One Arena in Washington, D.C., March 15, 2021. /CFP

D.J. Augustin (#12) of the Milwaukee Bucks tries to penetrate in the game against the Washington Wizards at Capital One Arena in Washington, D.C., March 15, 2021. /CFP

His three-year, $21 million deal only began to take effect this season, but the last year (2022-23) is not guaranteed. Assuming Augustin stays in Houston for the coming two years, Chinese basketball commentator Su Qun sees his arrival as a sign that the team may move Victor Oladipo next. The 28-year-old two-time All-Star guard kept turning down contract extension offers from the Indiana Pacers and Houston and he would not be interested in accompanying Houston during a rebuild.

The Bucks are unlikely to keep their first-rounder this year (top 9 protected). Though it won't be a lottery pick, it won't harm the Rockets to swap it for a second-rounder. As for the 2023 first-round pick, the five-year, $228 million deal signed by the Bucks with Antetokounmpo last year means that their picks will only grow more valuable as time goes on.

The Suns should not have to pay much for Craig. Though he only averages 11.2 minutes in 18 games for the Bucks this season, his defense is still reliable. Craig's problem is with his shooting – he only makes 0.4 triples per game with a 36.4 percent shooting percentage. Since the Suns have enough swing reserves for shooting guard, small forward and power forward, Craig may only be a part of the team's insurance plan. 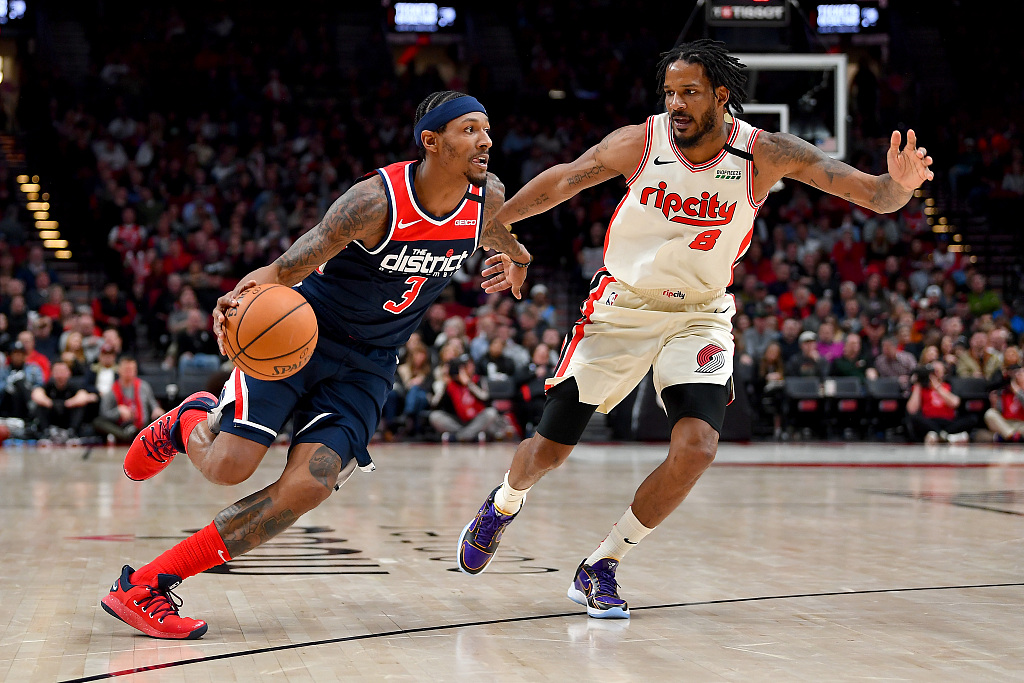 Trevor Ariza (#8) of the Portland Trail Blazers defends Bradley Beal of the Washington Wizards in the game at Moda Center in Portland, Oregon, U.S., March 4, 2020. /CFP

Trevor Ariza (#8) of the Portland Trail Blazers defends Bradley Beal of the Washington Wizards in the game at Moda Center in Portland, Oregon, U.S., March 4, 2020. /CFP

In another deal reached on Wednesday, the Heat sent Meyers Leonard and a 2027 second-rounder to the Oklahoma City Thunder in exchange for Trevor Ariza. After Leonard made controversial remarks that got him into trouble last week, it's fair to say that the Heat paid no more than a remote second-round pick for Ariza.

Ariza has not played any games for OKC this season, but his performance last season for the Portland Trail Blazers showed that he still has his game. He buried 34 triples at a 40 percent shooting rate in 21 games while averaging 1.6 steals. Since his job won't be very complicated – defense plus shooting open 3s – Ariza should be trusted despite his 35-year-old age.

The Heat are trying to fill the vacuum left by the departures of Jae Crowder and Derrick Jones Jr. during the offseason. They had been hoping that Maurice Harkless and Avery Bradley could replace Crowder and Jones until the team realized it's not possible. Ariza can do at least what one of them can do, and he has been a better 3-point shooter than both Crowder and Jones in his career.

It's unrealistic to think that Ariza alone will help the Heat remake their surprising success last season. However, they still have the contracts of Andre Iguodala and Kelly Olynyk to make a blockbuster trade happen. There are other big fish joining the pool like LaMarcus Aldridge of the San Antonio Spurs or Oladipo of the Rockets.