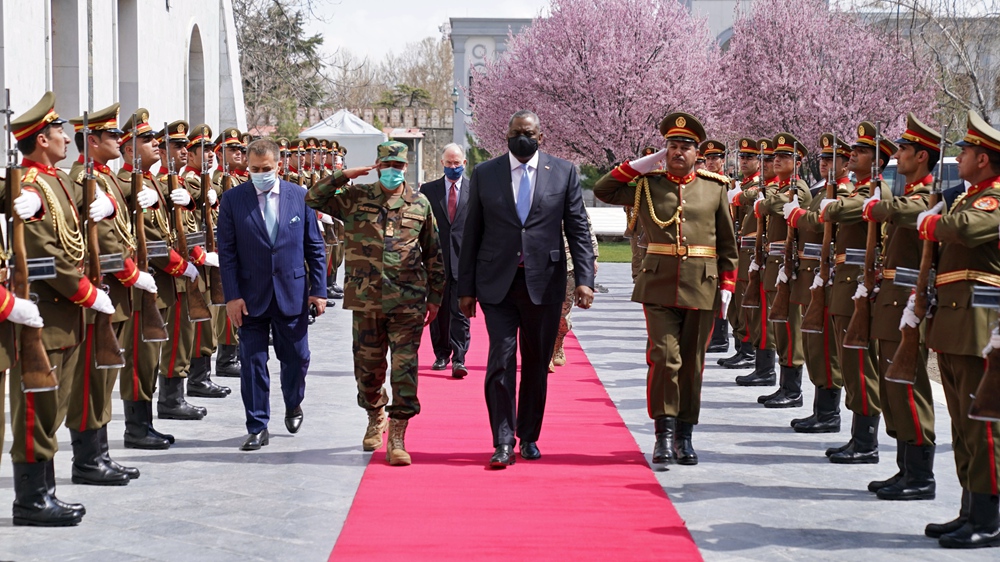 U.S. Defense Secretary Lloyd Austin completed an unannounced visit to Afghanistan on Sunday, the Pentagon said, just weeks before Washington is due to withdraw the last of its troops under a deal struck with the Taliban last year.

Austin held talks with President Ashraf Ghani less than a week after U.S. President Joe Biden said it would be "tough" to meet a May 1 deadline for a complete troop withdrawal.

Austin would not be drawn for comment on the deadline.

"That's the domain of my boss," he told reporters. "That's the... decision that the president (Biden) will make at some point in time, in terms of how he wants to approach this going forward."

Asked about the Taliban warning that Washington would face consequences if the deadline wasn't met, Austin said he was sure U.S. forces could cope. "I have great confidence and in his ability to protect our troops," said Austin, referring to General Austin Miller, commander of U.S. and NATO forces in Afghanistan.

Under the deal thrashed out between the Taliban and Washington, the insurgents pledged to engage in peace talks with Afghan government negotiators, but little progress has been made and fighting has only worsened.

Kabul was the last stop on a whirlwind tour of Asia for the new Pentagon chief, a former career soldier who served in Afghanistan as a division commander from September 2003 until August 2005.

The visit comes as the U.S. seeks to inject fresh impetus into a peace process that has dragged on in Doha since September, with feuding parties unable even to agree on an agenda.

Russia hosted an international conference on Thursday aimed at reviving the peace process. In a joint statement signed at the conference, Russia, China, the United States and Pakistan urged Afghanistan's warring sides to reach an immediate ceasefire.

The Afghan government and the Taliban agreed on Friday to try to accelerate peace talks after the Moscow conference, according to a senior Afghan official.

A broader conference on Afghanistan led by the United Nations is expected to be held in Istanbul, Turkey on March 27, several Afghan media outlets reported. But the date has not been confirmed officially.