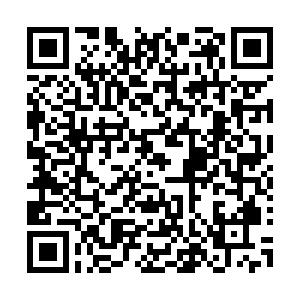 In Guangzhou, the construction of China's first automated seaport is under way.

The container quay in the southern province will be equipped with state-of-the-art smart systems as well as truck-sized intelligent guided vehicles that help create an exemplar of efficiency.

All this is realized through the support of 5G, Li Rong, an information manager at the port, told CGTN. "Previously the vehicular communication systems inside the port were run via WIFI, but the shortfalls of using WIFI, such as intermittent network delays and potential network crashes, would expose an automated port to safety risks."

Without 5G connectivity, it would be impossible to guarantee the safety of a transport pivot being run by artificial intelligence, Li added. 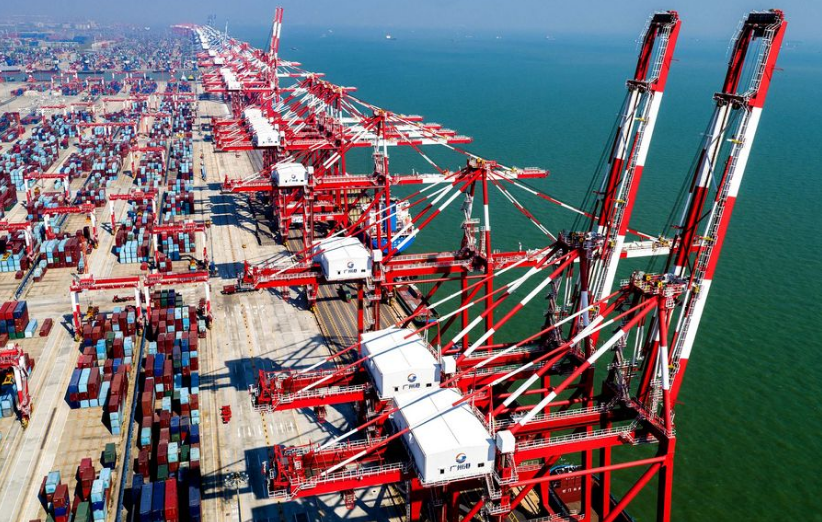 Huawei, the gigantic global telecom provider that's shifting its focus towards the Chinese market, supplied all the telecom gear and 5G-related hardware needed in the unmanned container quay. The firm has long been active in helping ports and other transportation infrastructure achieve automation, but this is not the only industry where Huawei is banking on growing its revenue. The 5G trailblazer has recently accelerated its foray into other industries in the face of serious challenges in its smartphone business.

Once the world's largest mobile phone maker, Huawei's operations have been subject to harsh sanctions imposed by the U.S. In August last year, the Chinese corporation was cut off from access to chips produced using U.S. technology, heavily undercutting the supply it needs to manufacture handsets.

The chip shortage led the company to suffer a 42 percent tumble in phone shipments in the last quarter of 2020, while reports have also suggested it plans to reduce its manufacturing of smartphones by up to 60 percent this year.

To compensate for its losses resulting from Washington's blockade, Huawei has turned to a domestic market where its potential can be fully unleashed.

Besides transportation, the firm has also entered one of the largest agricultural industries in China – hog farming. An AI system that the telecom behemoth is rolling out helps track pigs through facial recognition, prevents disease and monitors their health and physical conditions.

"Having a system like this allows farming companies to improve efficiency and save a considerable amount on labor costs," said Yao Weipeng, the assistant to general manager at Guangdong Guoda Investment Group, which owns a sizable pig farming business. 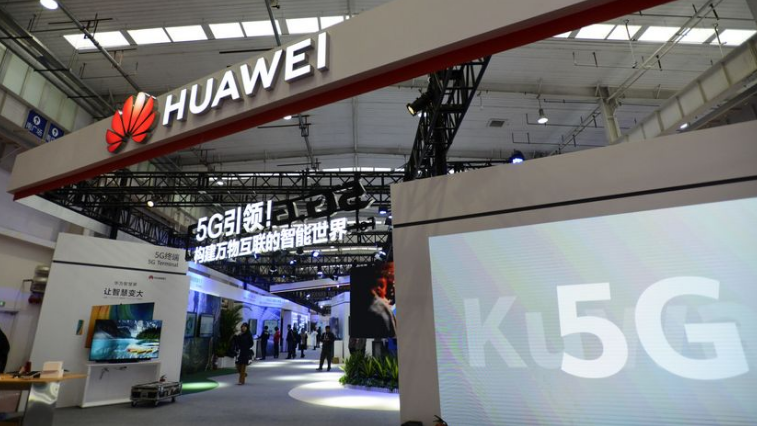 At a mid-sized ranch that keeps 4,000 sows, the number of keepers required would be around 50 to 70. But with an AI system in place, the farming company can cut back its labor force by at least half, he told CGTN.

But not every farming business would be incentivized to adopt such technology. Small businesses can't afford it because making the purchase would require a one-time payment of around several million yuan, Yao said.

"They often have the tendency to maintain the status quo," he added. "Bringing in a costly AI system for only a small stockpile of pigs is not cost-effective."

Since 2018, the prevalence of African swine fever (ASF) has deeply affected the pig production industry in China. Many farming businesses have endured tremendous losses due to the rising death rates of hogs caused by the disease, while China's pork production has fallen to a new low as the deadly virus continues to ravage across the country.

But motivated by skyrocketing pork prices, outsized corporations from other sectors have begun launching their own farming businesses. With more capital flooding in, the cost of hiring labor has grown substantially, and cost-saving AI systems have become increasingly attractive for these cash-rich enterprises.

"The trend of adopting AI began even before the ASF outbreak, as small ranches were being squeezed out and the pig farming business was increasingly taken up by big corporations," Feng Yonghui, an analyst at industry website Soozhu, told CGTN. 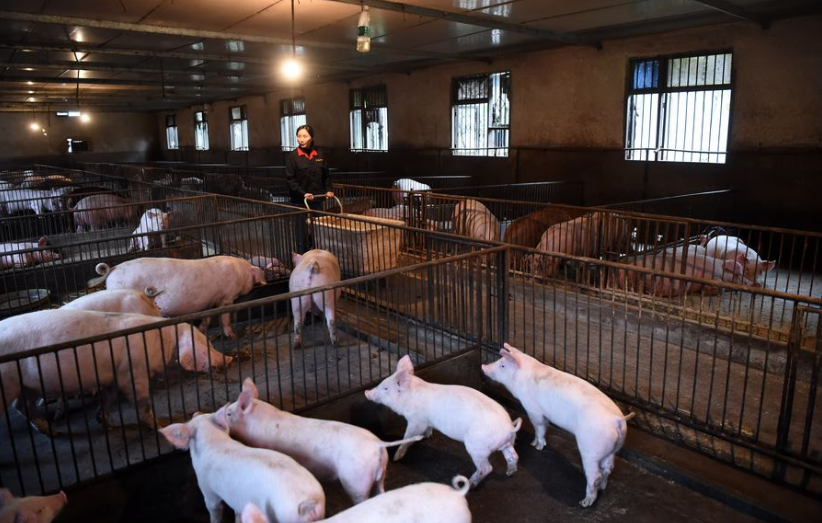 Aiming to make the corporate balance sheet more impressive, Yao said his company is planning to purchase an AI system in its next ranch.

"Under the current climate, employing people with the right skills is not easy. It is not just the rising cost we need to take into consideration; we also have to weigh the amount of time it takes to train the newly-hired employees."

"And with the system, there will be fewer employees on the site, thus avoiding possible diseases carried by human."

China has the world's biggest pig farming industry. In 2019, about 44.8 million tonnes of pork was consumed in China, which accounted for roughly half of the world's consumption, and a total of 440 million pigs were reared by domestic farmers.

While the size of the market looks promising for Huawei, the firm will likely encounter fierce competition as other big tech firms are also racing to enter, and certain constraints within the industry may hamper its business potential.

As each company's demand for the AI system is likely fixed, sales in these appliances may not be directly linked to the performance of hog production, Feng said.

The whole industry is very fragmented, he added. "In terms of business model and corporate size, there are huge discrepancies between companies. For Huawei and others alike, penetrating the market with an advanced AI system could be a laborious endeavor."

"We have about 600 million pigs in China, but there is a big question mark over how many of these pigs would be kept in a ranch equipped with Huawei's technology or even an AI system at all," Feng said.

Other than pig farming and transportation infrastructure, Huawei is also pouring its capital and resources over other domestic sectors such as coal mining and solar energy. 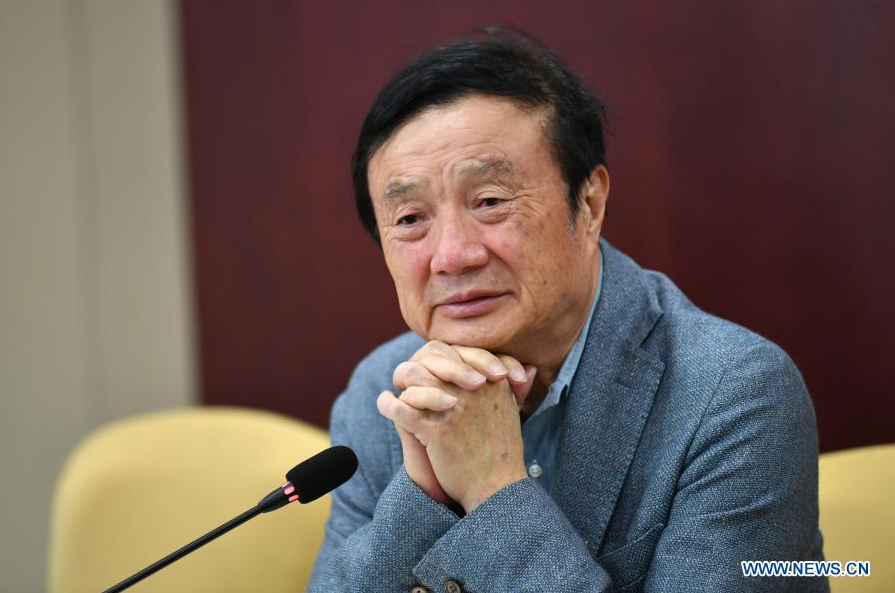 The crux of the model is to bring together experts from a variety of fields to "form a lean team," he said. "This shortens the time-to-market of new products. This model also allows us to approach our various businesses in a more granular way, and everything is much more efficient."

Ren has stressed that Huawei is not really diversifying its business, but rather trying to maximize the commercial use of its self-developed technologies by customizing them for each industry.

This is a good example of how tech corporations like Huawei maintain sustainable growth, said Li Yingliang, vice president of MP Consulting Group, a business management consultancy based in Guangzhou.

But in the short run, it could be difficult for Huawei to actually offset the damage caused by U.S. sanctions, he told CGTN. "The market level of its core business is just incomparable to the 5G and AI areas of these other industries."

In the effort to expand the scope of its business, Huawei is still at an early developing stage, Li added. "For each market entrance, even though everything relies on existing technologies owned by the firm, it will still need time to research, develop and adapt."