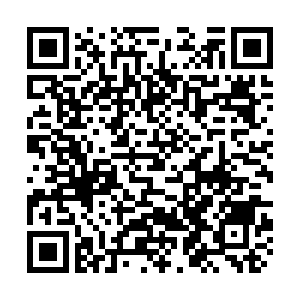 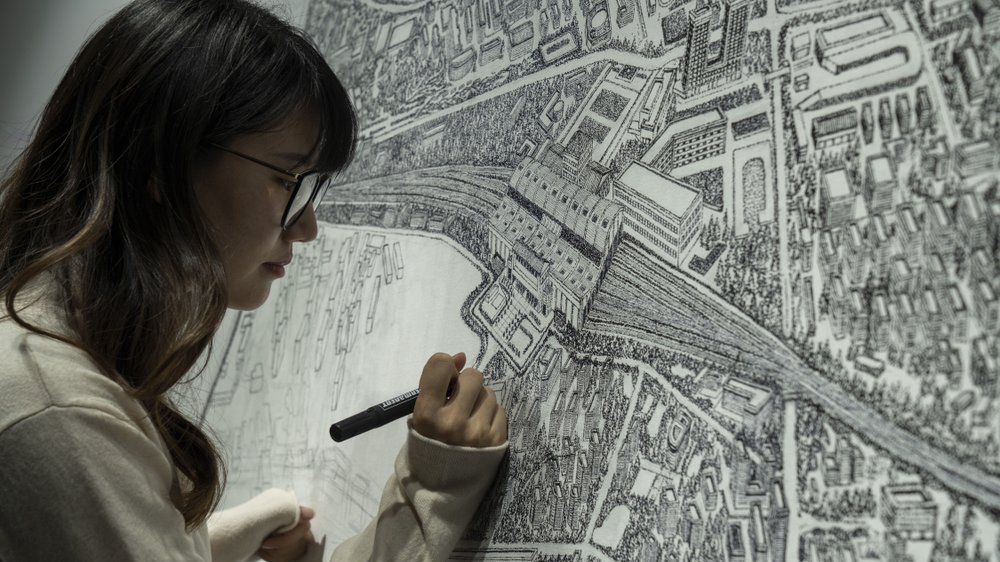 Scribbled instructions for incoming patients plastered on the window of a silent hospital reception counter. A lone worker in a hazmat suit, steadily spraying disinfectant in an empty hospital hallway.

Such scenes from the height of the coronavirus pandemic in Wuhan – moments of fear and desperation as well as unity and resilience are etched in the mind of artist Yang Qian.

One year on, she is channeling those memories into artwork to preserve the memory of the central Chinese city's 76-day lockdown that upturned the lives of some 11 million people. In a way, that's an extension of her work as a volunteer delivering vital supplies to hospitals and residents during the traumatic period, while also reflecting the pride many residents take in having weathered the outbreak and strict measures taken to bring it under control.

"To express what I've seen in a realistic way, this is the responsibility I've given myself. I also hope that much of the history should not be forgotten," Yang said.

A painter by trade, she felt helpless in the face of an unknown virus ravaging her beloved hometown in January 2020.

From January 25, she began volunteering with a group delivering protective clothing, masks and other supplies around hospitals. Over the course of 4 months, she and a fellow volunteer delivered some 90,000 sets of protective clothing and around 450,000 face masks. 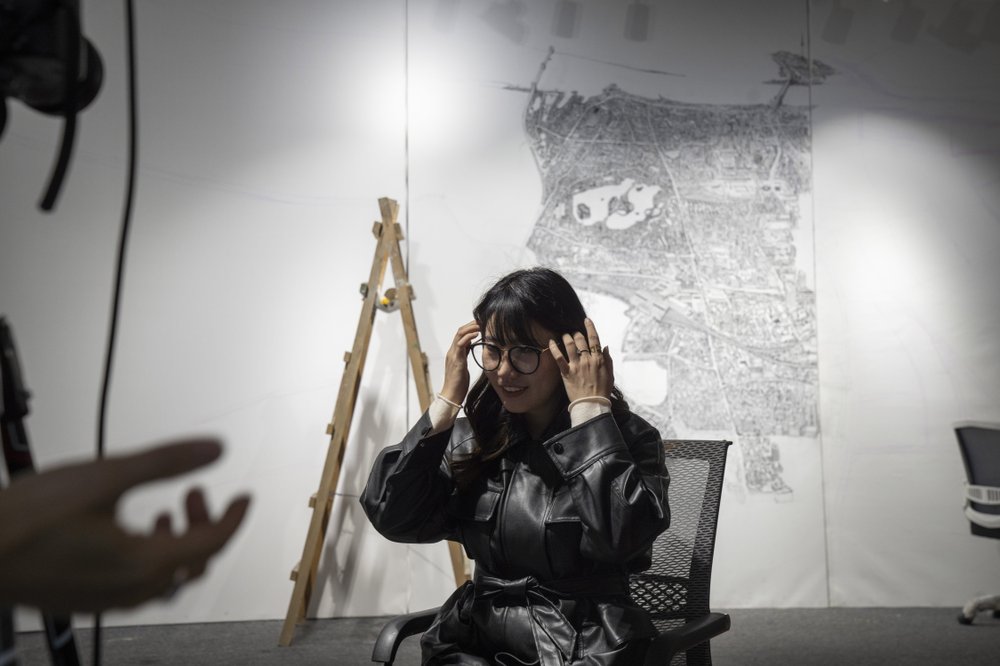 As she made her rounds, she took on requests from residents and strangers, delivering much-needed supplies from medicine and disinfectant to food. Sleep was at a premium as deliveries at times ran into the early morning hours.

Her first post-pandemic artwork, "Reception," grew out of the experience of accompanying a mother and daughter to a hospital in early February. The two had developed COVID-19 symptoms after the father died at home from the disease and, desperate, took to social media for help.

Yang saw the post and found a hospital willing to accept the pair, but was told that no ambulances were available.

With public transportation closed, the only solution was to bicycle to the hospital, with Yang leading the way.

At the reception desk, she saw instructions for new patients taped on its window, some scribbled by hand. Stretched to their limit, hospital staff would point to the window instead of answering questions. 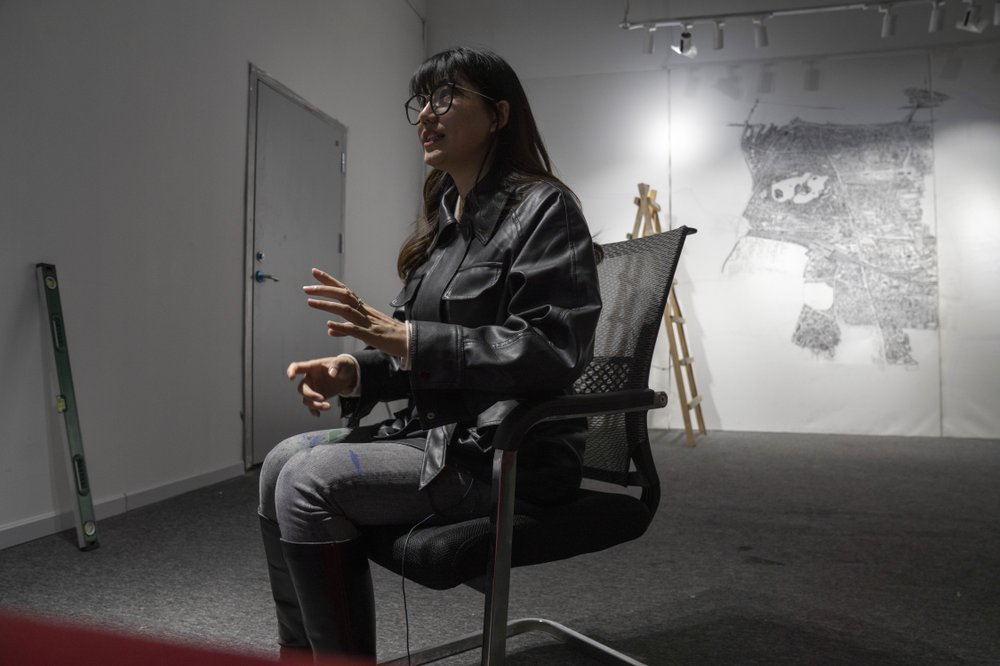 Chinese artist Yang Qian speaks during an interview at her studio in Wuhan in central China's Hubei Province, January 24, 2021. /AP

Chinese artist Yang Qian speaks during an interview at her studio in Wuhan in central China's Hubei Province, January 24, 2021. /AP

"It made me feel a kind of oppression, a kind of fear," Yang said. "Everyone, especially the doctors, are spending time only to rescue patients."

She meticulously reproduced the scene in an oil painting, right down to its torn papers and scribbled notices.

A second oil painting followed based on a photograph of a worker disinfecting a hospital hallway, rendered in shadowy hues of deep blue and black.

"It is in such a severe situation (but) even in this atmosphere, there are still people who stand up for us and protect us," Yang said.

Soon after sending the mother-daughter pair to hospital, Yang came down with a fever and cough and feared she had the virus. In tears, she went to a hospital to get tested and began writing her will. After what she calls the longest hour of her life waiting for the results, she was given the all-clear.

One year on, Wuhan has largely returned to normal, its streets bustling with shoppers, its nightclubs throbbing until dawn and pensioners dancing to a Chinese rendition of a Katy Perry song along the neon-lit Yangtze River. Only the face masks that residents wear provide a visual reminder of the pandemic's impact.

"What I see is the unity of our city, our nation. I find that I am really very proud of being a Chinese," Yang said. 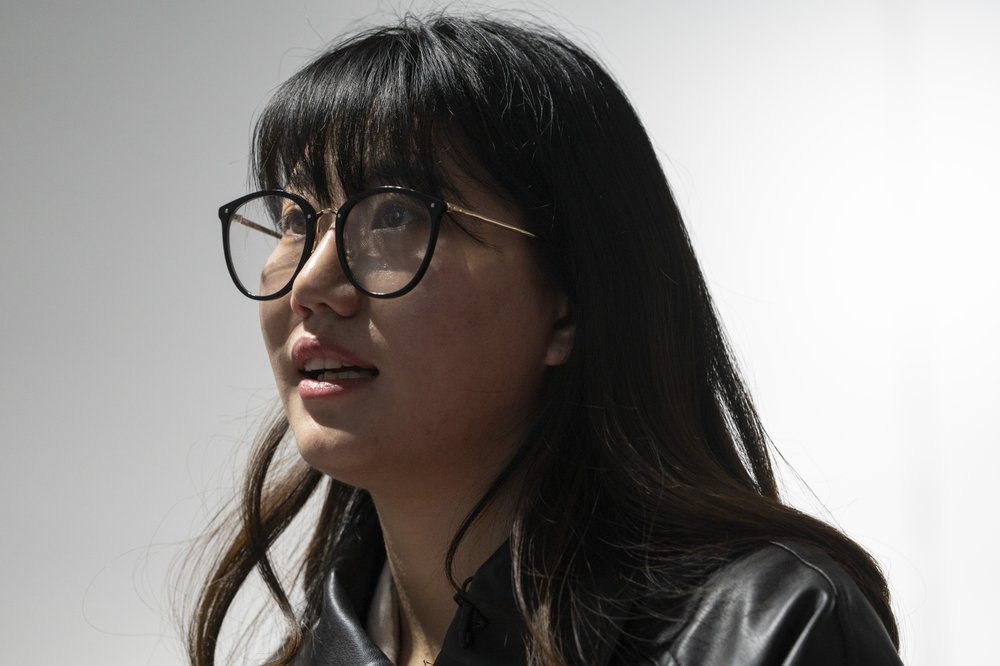 An exhibition she organized last year at a gallery she runs brought together 23 artists with 60 pieces of artwork related to the coronavirus.

Her efforts have won plaudits from Wuhan media and residents. The exhibition "crystallized every touching moment of the pandemic," said entrepreneur and friend Michael Liu.

"Unifying art and thoughts, and taking action, is something that many of us cannot do," he said.

Yang is currently working on a wall-size aerial view of Wuhan under lockdown, with individual residents represented by black ink dots. It's an expression of their unity in pulling through the crisis.

For now, she is focused on making up for the pandemic's lost time, working on her painting, managing her gallery and preparing for upcoming exhibits. The pandemic, she said, is a reminder of how precious that time can be: "Life is really very fragile and small."