As leaders from both sides prepare to reach beyond party lines to exercise onerous coalition negotiations, it is important to note that the current deadlock carries high foreign policy stakes for Israel. The absence of a governing coalition denies Israel unity in protesting the current U.S.-Iran nuclear deal compliance build-up, and empowers international mediators to potentially reinitiate negotiations on a two-state solution to the Palestine-Israeli conflict, a process privately denounced by Israel.

On the Joint Comprehensive Plan of Action, diplomatic positions are entering a sensitive stage. In a closely watched address, Iranian Supreme Leader Ayatollah Khamenei deconstructed a misconstrued narrative: that both Iran and the U.S. were falling flat on JCPOA's compliance because of the absence of a "first" step. The mood in Washington is to supplement routine blame-games with a serious recourse to nuclear negotiations with Iran, a sentiment shared by its chief Iran envoy and the top UN atomic watchdog.

Such transitioning narratives and growing international support reveal a fracture in Israel's post-election opposition to the JCPOA: most of Netanyahu's rivals represent competing perspectives on Israel's course of action. For instance, Yair Lapid, leader of the opposition, supports "an agreement" where strong nuclear oversight is paramount. Gideon Saar, who presently denies Netanyahu a six-seat coalition leverage, recognizes the limits of pressuring Washington through coercive diplomacy. Instead, Saar wants to sell Israel's opposition to the JCPOA by appearing more constructive with Washington than Netanyahu ever was during the Obama era. 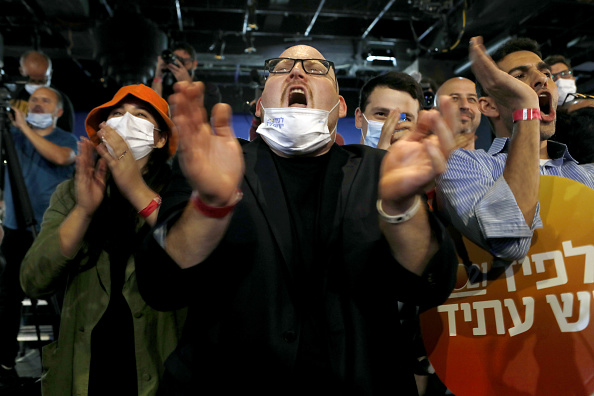 Regardless of each position's pitfalls, Netanyahu's rivals remain wary not to override Washington's autonomous messaging with Tehran. The Likud chief may want to change that, but he must first establish himself as the face of a ruling Israeli coalition within weeks. That would mean gaining loyalties of the right-wing Yamina party and the Islamist Raam, and integrating their eleven seats in an unlikely alliance.

Hampering instant headway is the leader of the opposition, Lapid, who has his eyes on the exact same outcome.

The timing of Israel's cyclical stalemate is also conducive to the U.S.-backed Palestinian "reset." For weeks, Netanyahu and his opponents have focused their energies on everything domestic – from electioneering to the splintering of coalitions. That same preoccupation continues to sustain today in the form of an undetermined ruling coalition. Netanyahu's own party appears most on-edge. "The change bloc is a laundered term for an undemocratic bloc," said Likud in reference to a possible opposition bloc emerging in the coming weeks.

As a result of its domestic fixations, Israel fails to deter the Quartet of Mideast mediators – U.S., UN, Russia and the European Union – from renewing its commitment to "meaningful negotiations" on a two-state solution. In a show of autonomy, all four stakeholders successfully concluded their virtual meeting this week in the midst of Israel's power tussle, and Washington delivered on its $15 million-strong COVID-19 assistance for Palestine on the world stage.

Be reminded that the latter assistance is not a one-off step. It is a central component of the Biden administration's new "U.S. Palestinian Reset and the Path Forward" plan, revealed by the press last week. The plan considers the $15 million sum as a prelude to a full set of economic, security and humanitarian assistance programs for Palestine and stronger engagement with the Palestinian leadership. Above all, the initial assistance is seen as part of a larger U.S. vision where advancing the "freedom, security, and prosperity for both Israelis and Palestinians" is essential to a "negotiated two-state solution."

It is here that Israel's post-election dilemma is on full display: no single leader has complete ownership over the country's foreign policy discourse. Parties and their leaders represent numerous variants of religious nationalism and authoritarian populism, both exercised in conjunction to determine which leader would serve as the face of Israel's ruling coalition, and its voice overseas.

Based on this reality, even if Netanyahu succeeds in hammering out an alliance over the next month or so, its endurance would have to stand the test of time. Israeli leverage against the JCPOA or a two-state settlement is also a long-shot, considering how Washington considers both fronts a sovereign pursuit.