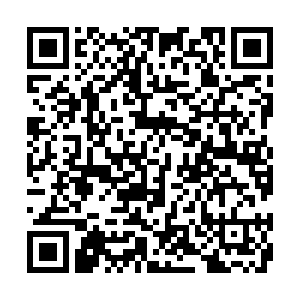 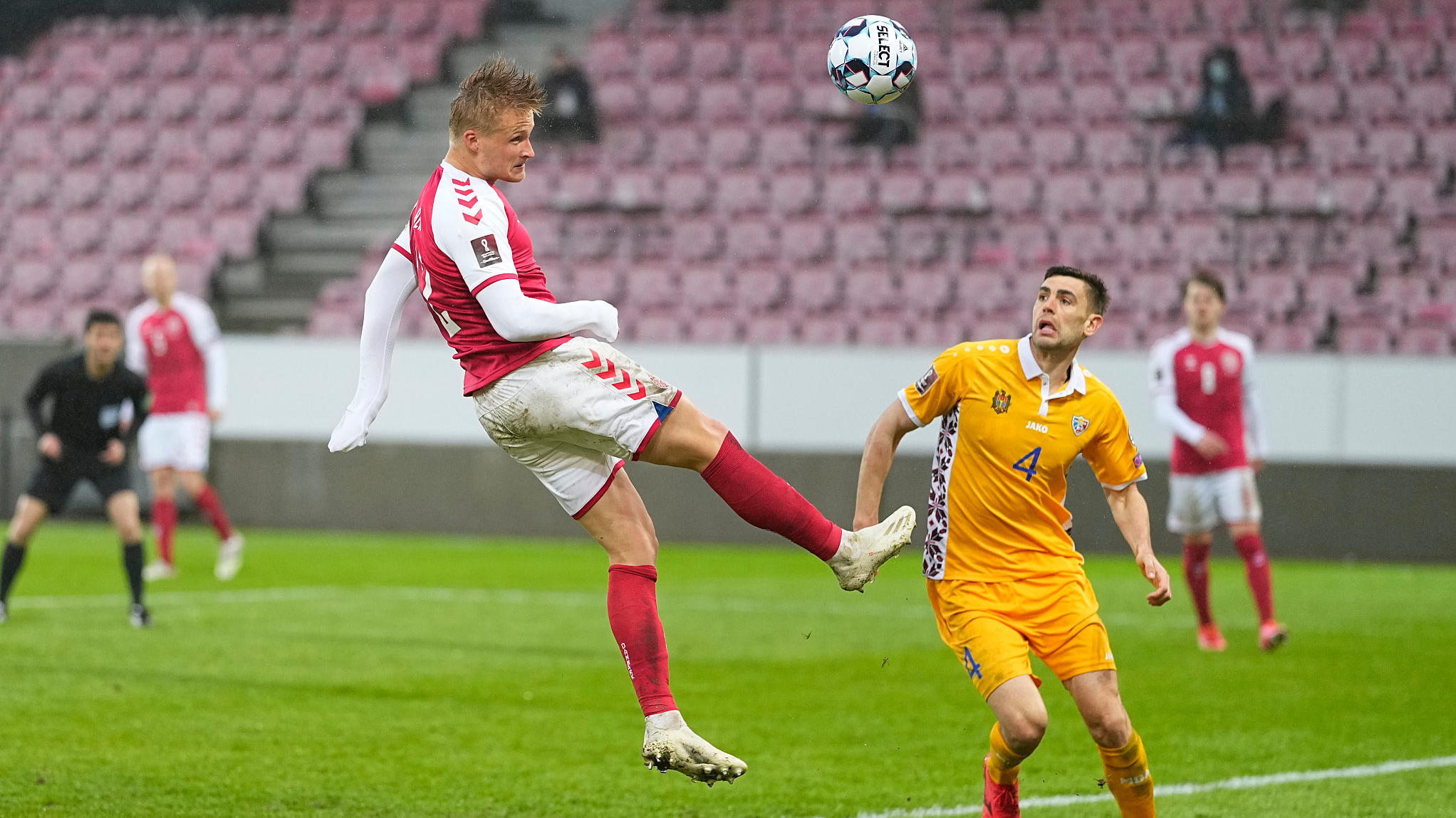 Players of Denmark and Moldova in action during the World Cup qualifier in Herning, Denmark, March 28, 2021. /CFP

Players of Denmark and Moldova in action during the World Cup qualifier in Herning, Denmark, March 28, 2021. /CFP

Denmark turned on the style as they thrashed hapless Moldova 8-0 in their World Cup qualifier on Sunday to top Group F, with Kasper Dolberg and Mikkel Damsgaard both scoring twice against the nation ranked 177th in the world.

Coach Kasper Hjulmand made 10 changes from the Danish side that defeated Israel 2-0 away in their opening qualifier as only goalkeeper Kasper Schmeichel remained in the team, but it made little difference as they quickly dismantled the visitors.

The Danes went ahead in the 19th minute when Moldova midfielder Catalin Carp pulled down Joachim Andersen and Dolberg sent the penalty low to goalkeeper Stanislav Namasco's right.

Three minutes later they were two goals up when some dreadful Moldovan defending allowed Andreas Skov Olsen to cut in from the right and set up Damsgaard to poke the ball home, and the winger netted his second seven minutes later.

Fullback Jens Stryger Larsen added a fourth, cutting in from the right before curling the ball into the net with his left foot and Mattias Jensen made it 5-0 six minutes before the break.

Dolberg headed his second early in the second half before substitutes Robert Skov and Marcus Ingvartsen rounded off the scoring to leave the Danes top on six points, with the rest of the group due to play their second games later on Sunday. 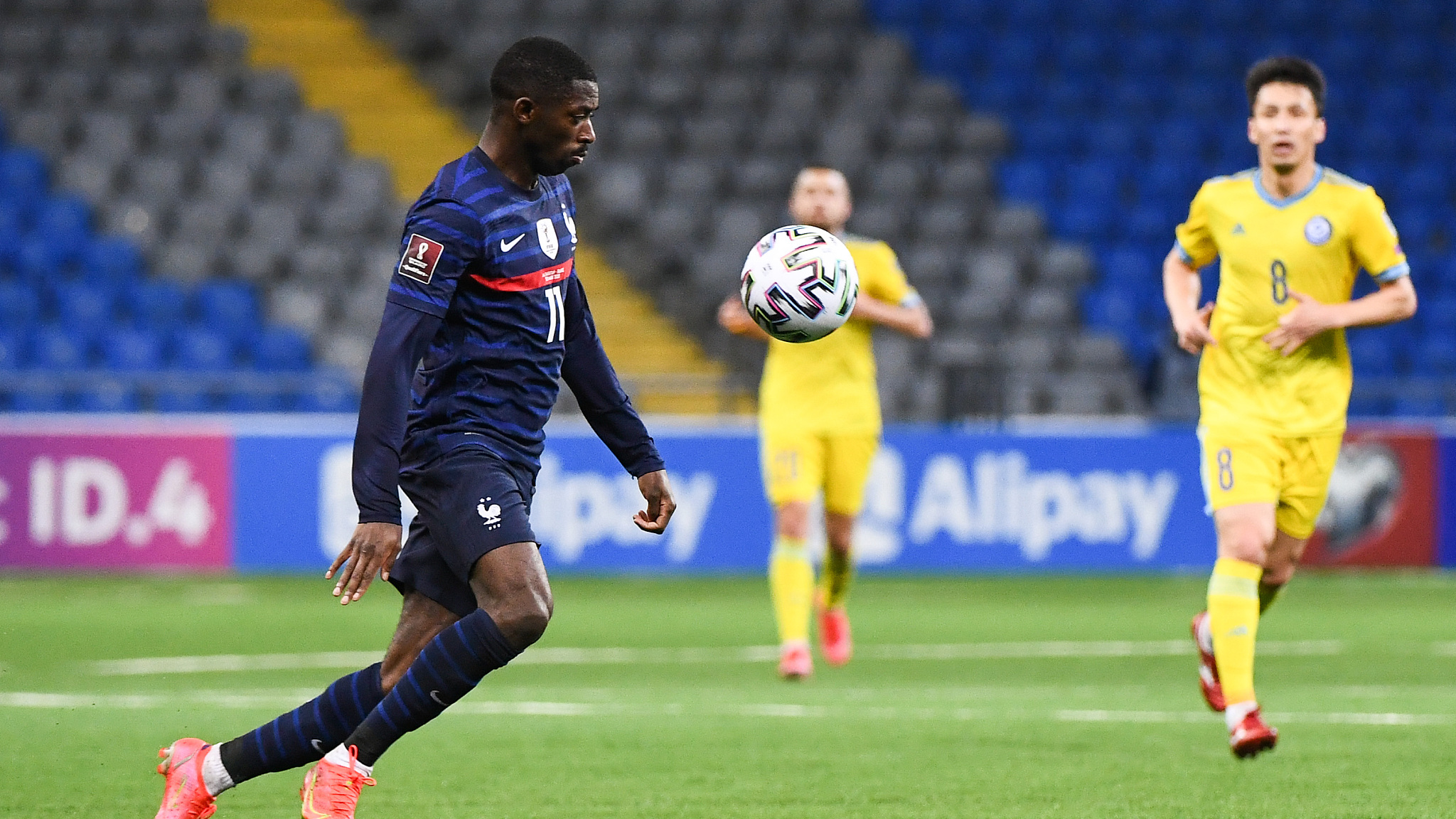 Ousmane Dembele of France (L) in action during the World Cup qualifier against Kazakhstan in Astana, Kazakhstan, March 28, 2021. /CFP

Ousmane Dembele of France (L) in action during the World Cup qualifier against Kazakhstan in Astana, Kazakhstan, March 28, 2021. /CFP

Ousmane Dembele scored the opening goal as holders France beat Kazakhstan 2-0 away to claim the first victory in their campaign to qualify for the 2022 World Cup in Qatar.

Sergei Maliy put through his own net for France's second goal before halftime but Kylian Mbappe had a second-half penalty saved after coming off the bench.

It was a welcome result for the reigning world champions after they kicked off their campaign in qualifying Group D by drawing 1-1 at home to Ukraine last Wednesday.

Didier Deschamps' side now stop off in Sarajevo for another match against Bosnia and Herzegovina on Wednesday to complete a hectic start to qualifying before reverting their focus to the delayed Euro 2020 in June.

In an attempt to keep his squad fresh, Deschamps made nine changes to his lineup following the Ukraine draw for the match in Nur-Sultan, more than 5,000 kilometers east of Paris in Central Asia.

Antoine Griezmann, who scored France's goal against Ukraine, was the only outfield player to keep his place in the side, while Hugo Lloris again started in goal as he won his 122nd cap.

Griezmann's Barcelona teammate Dembele was one of those brought into the team as he started for France in a competitive game for the first time since the triumphant 2018 World Cup campaign in Russia.

It was Dembele who got the breakthrough in the 20th minute, controlling on the edge of the box and scoring with a low drive into the corner of the net after good work by Anthony Martial to set him up.

France scored again a minute before halftime when defender Maliy headed a Griezmann corner into his own net as he tried to hold off Paul Pogba.

That effectively ended any doubt about the outcome of the contest with Kazakhstan, ranked 122nd in the world, struggling to create any chances at the other end.

Manchester United forward Martial took a knock and was eventually replaced just before the hour mark by Mbappe, who had several chances to add to France's lead.

The best opportunity for the Paris Saint-Germain star came from the spot in the 75th minute after he had been brought down by Nuraly Alip.

However, Mbappe's kick was turned around the post by home goalkeeper Aleksandr Mokin. 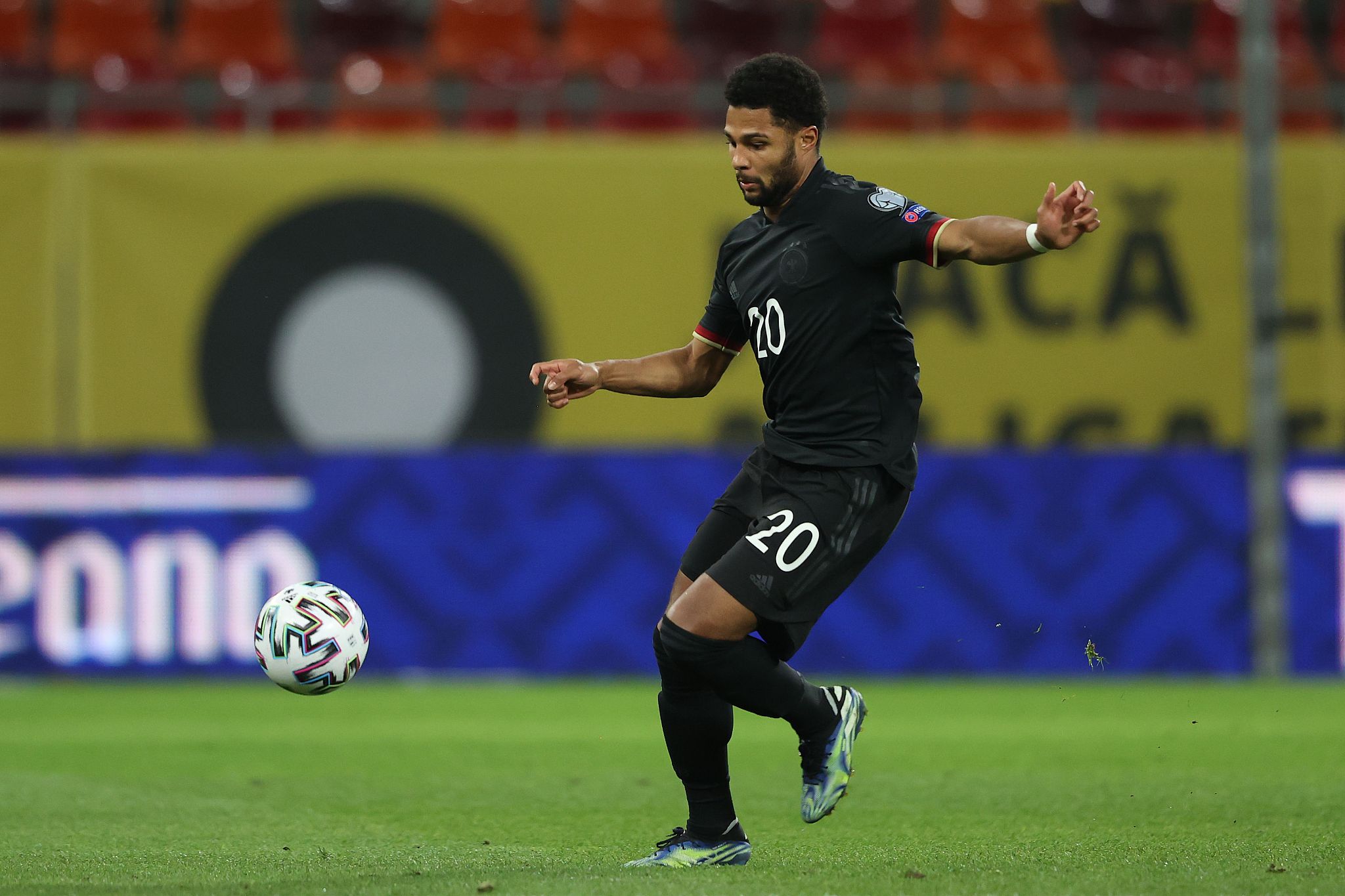 Serge Gnabry of Germany runs with the ball during the World Cup qualifier against Romania in Bucharest, Romania, March 28, 2021. /CFP

Serge Gnabry of Germany runs with the ball during the World Cup qualifier against Romania in Bucharest, Romania, March 28, 2021. /CFP

A first-half goal by Serge Gnabry was enough to seal a tight 1-0 away win for Germany against Romania on Sunday in their World Cup qualifier.

The Bayern Munich winger has scored 15 goals in just 19 appearances for the Mannschaft.

Germany outmuscled their hosts with 18 shots on goal, twice as many as the Romanians.

Italy's Andrea Belotti and Manuel Locatelli secured a 2-0 win over Bulgaria, while a stoppage-time goal helped Spain grab a 2-1 win away to Georgia.