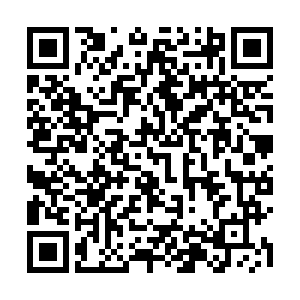 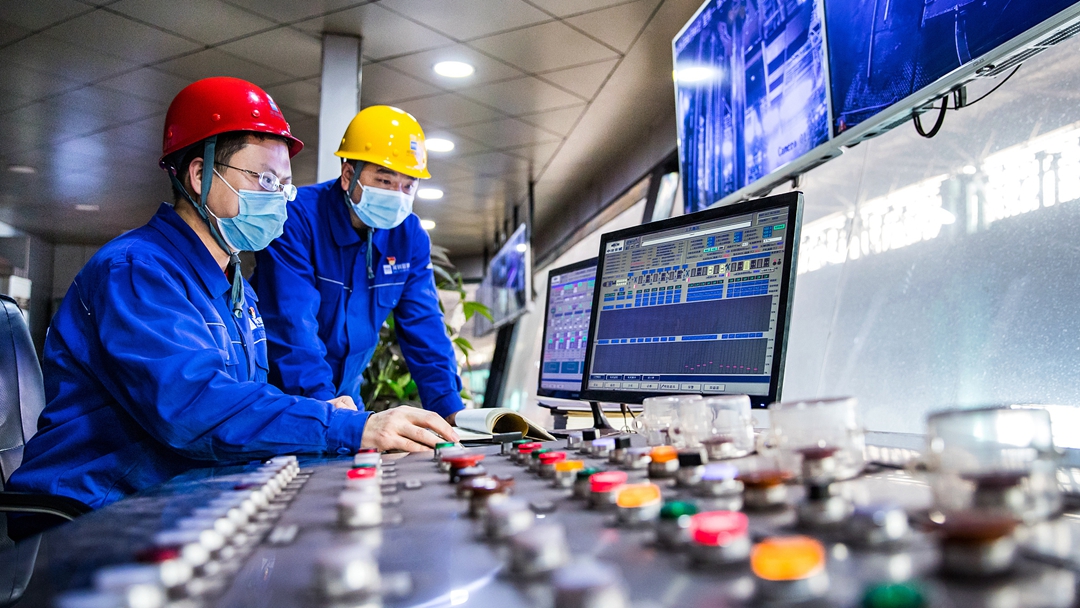 China's factory activity expanded at a faster pace in March as factories ramped up production after the Spring Festival holiday, while upbeat export orders provided a further boost.

The purchasing managers' index (PMI) for China's manufacturing sector came in at 51.9 in March, up from 50.6 in February, the National Bureau of Statistics (NBS) said on Wednesday.

The data beat an estimate of 51.2, the median forecast of 30 economists polled by Reuters. A reading above 50 indicates expansion in activity, while a reading below reflects contraction.

The import index edged up to a multi-year high, said Zhao Qinghe, a senior NBS statistician who attributed the growth to expanding domestic demand and production after the Spring Festival holiday, along with the continuing economic recovery from the COVID-19 shock around the world.

The trade increase is partly driven by recovering demand from the U.S. as the impact of the $1.9 trillion stimulus package started to kick in and the vaccination program progressed faster than expected, said Wang Dan, chief economist at Hang Seng Bank China. "Much of the U.S. consumer demand has turned into orders for China, through both traditional factories channels and cross-border e-commerce," she said. 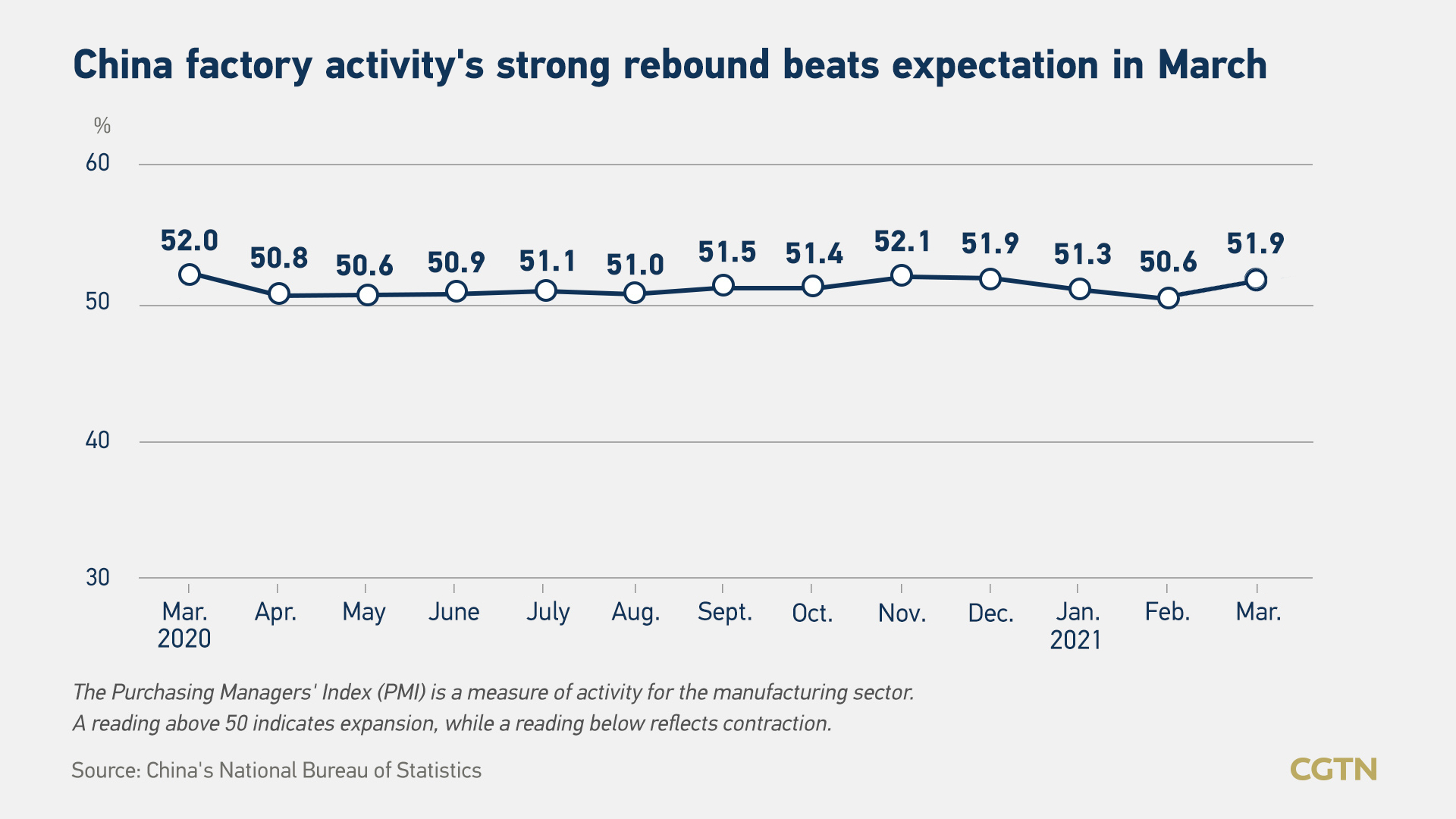 The sub-index of production and new orders rose to 53.9 percent and 53.6 percent respectively, indicating an acceleration in enterprises' production and purchasing demand.

Zhao also referred to the increase in the cost of raw materials like oil and coal in propping up the factory gate prices.

Manufacturing employment has risen 2 percentage points to 51, the first increase since last May, indicating a warming up in the labor market.

However, Wang cautioned that the increase was concentrated in large producers, adding that employment at mid- and small-sized enterprises continued to shrink.

Of all sectors, construction activities saw the strongest rebound, due to warmer weather and normalization in production after the Spring Festival holiday. "We anticipate this trend will continue with the pan out of government-backed infrastructure building and affordable housing projects," Wang said.

Growth in China's service sector expanded at a much faster pace in March. The official non-manufacturing PMI surged to 56.3 in March, far exceeding market anticipation. Nomura economists expected a modest rise to 52 from 51.4 last month. 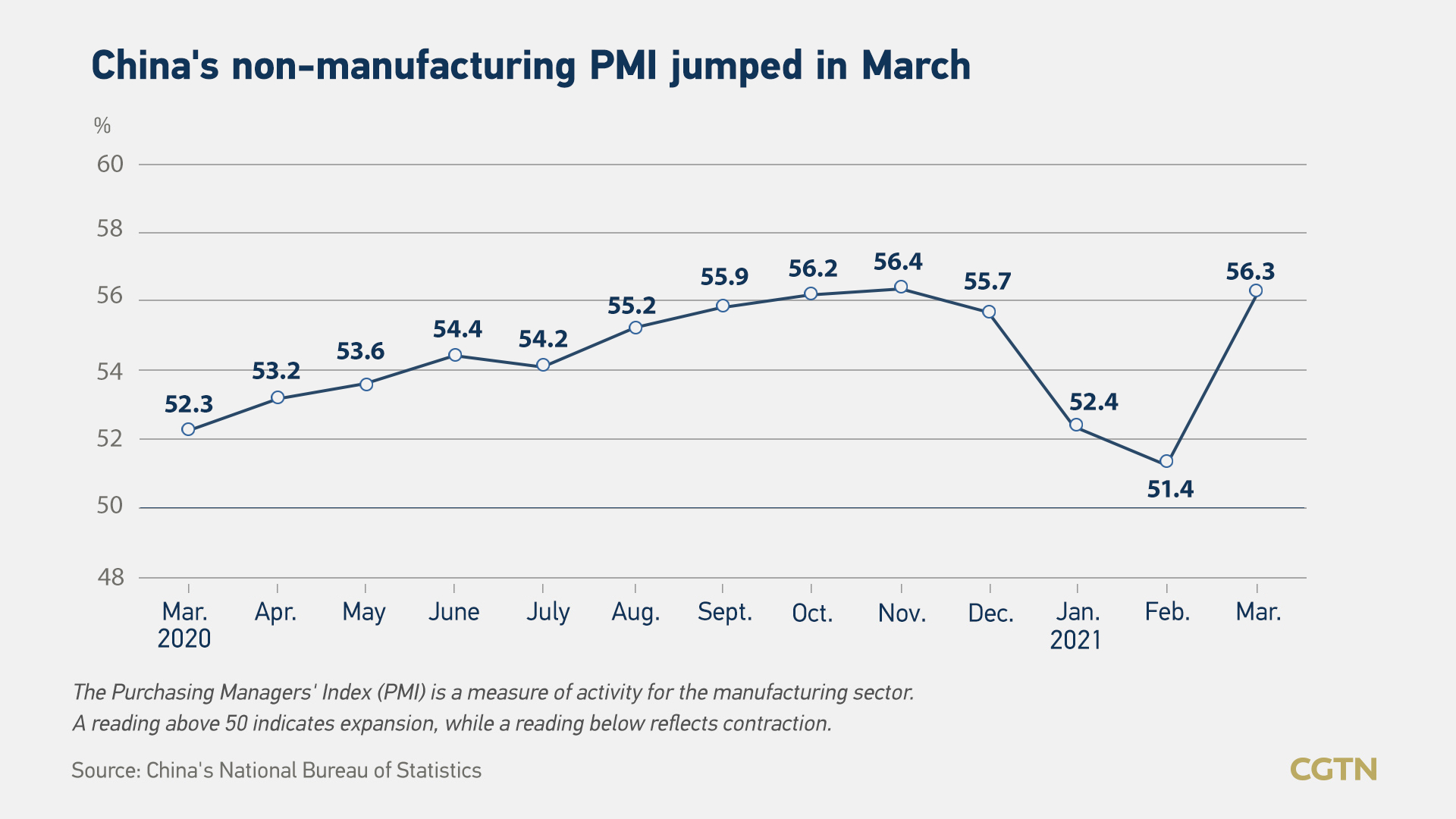 China's service sector had lagged in recovery compared to manufacturing, but in March it began to catch up.

The hike shows that as the pandemic prevention measures' outcome play out, people's pent-up demand continues to be released and the service sector's recovery has been boosted, Zhao said.

"We expect services to recover faster in the rest of the year since business and traveling activities are normalized and vaccination has picked up pace," Wang predicted.

Within the service sector, railway and air transportation, internet software and information technology services, and monetary and financial services industries saw the biggest business increase, with PMI above 60.

The accommodation and rental industries, which were hit harder by the pandemic, have also returned to the growth zone.

The official composite PMI, which includes both manufacturing and services activity, rose to 55.3 from February's 51.6.

"We expect both the manufacturing and non-manufacturing PMIs to moderate in April," wrote Lu Ting, chief China economist at Nomura, in a note to CGTN.

However, he cautioned on the inflation pressure on producer prices, which resulted from raising global commodity prices and domestic anti-pollution measures implemented in north China.