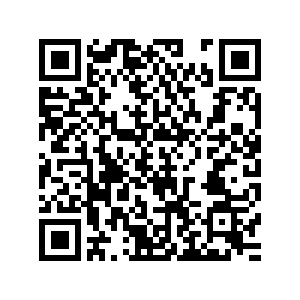 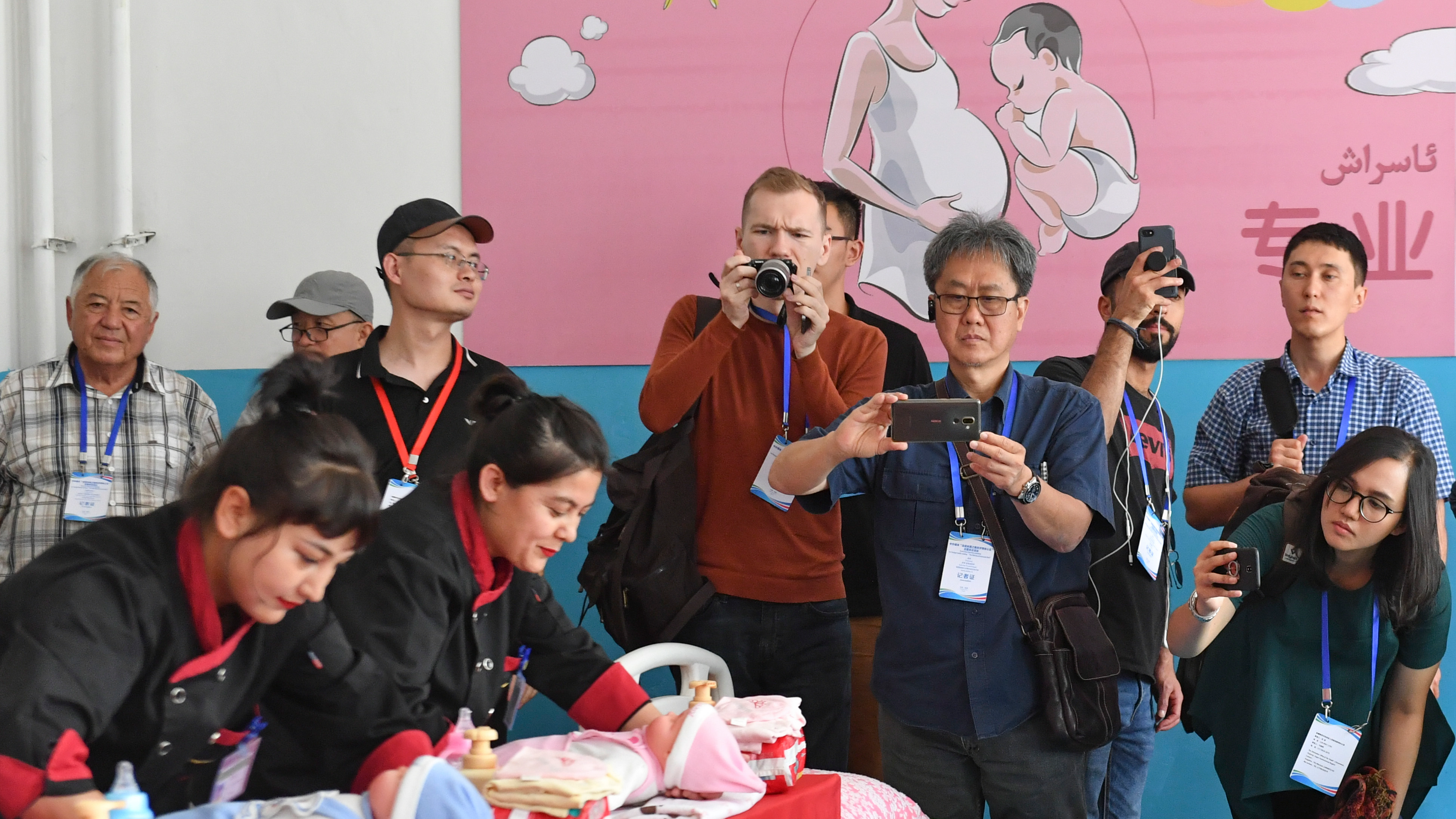 Editor's note: William Jones is the Washington bureau chief of the Executive Intelligence Review and a non-resident fellow of the Chongyang Institute for Financial Studies, Renmin University of China. The article reflects the author's views and not necessarily those of CGTN.

The Joe Biden administration has really gone off the rails in its latest human rights report, giving the official imprimatur to labeling Chinese policy in Xinjiang Uygur Autonomous Region "genocide." While this outlandish claim was made by the now discredited anti-China hawk Mike Pompeo, it has now been officially adopted by the "liberal" Biden administration, and solely based on unfounded rumors spread by the right-wing networks of German Adrian Zenz.

That accusation of "genocide" stands strongly refuted by the fact of the tremendous increase in the Uygur population in China's Xinjiang, greater than the growth of the ethnic Han population. But isn't "genocide" an attempt to reduce a population and not increase it as in Xinjiang?

Now every country has some form of minority within its boundaries. There are really no nations today that are totally "racially pure," nor would we want that. But the criteria for "genocide" has to be a conscious attempt to eliminate a particular racial or ethnic group.

Similarly, with an improvement in the medical facilities and the level of health of the population as well as the new educational opportunities that have opened up for young Uygurs, life is better for them today than it was yesterday.

The United States also has its minority groups. How are things going for African-Americans these days? How have their conditions of life improved? How have their medical services improved? Are they, like the Uygur population in Xinjiang, receiving full access to COVID vaccines? And why are they dying at a greater rate from COVID-19 than the white population? 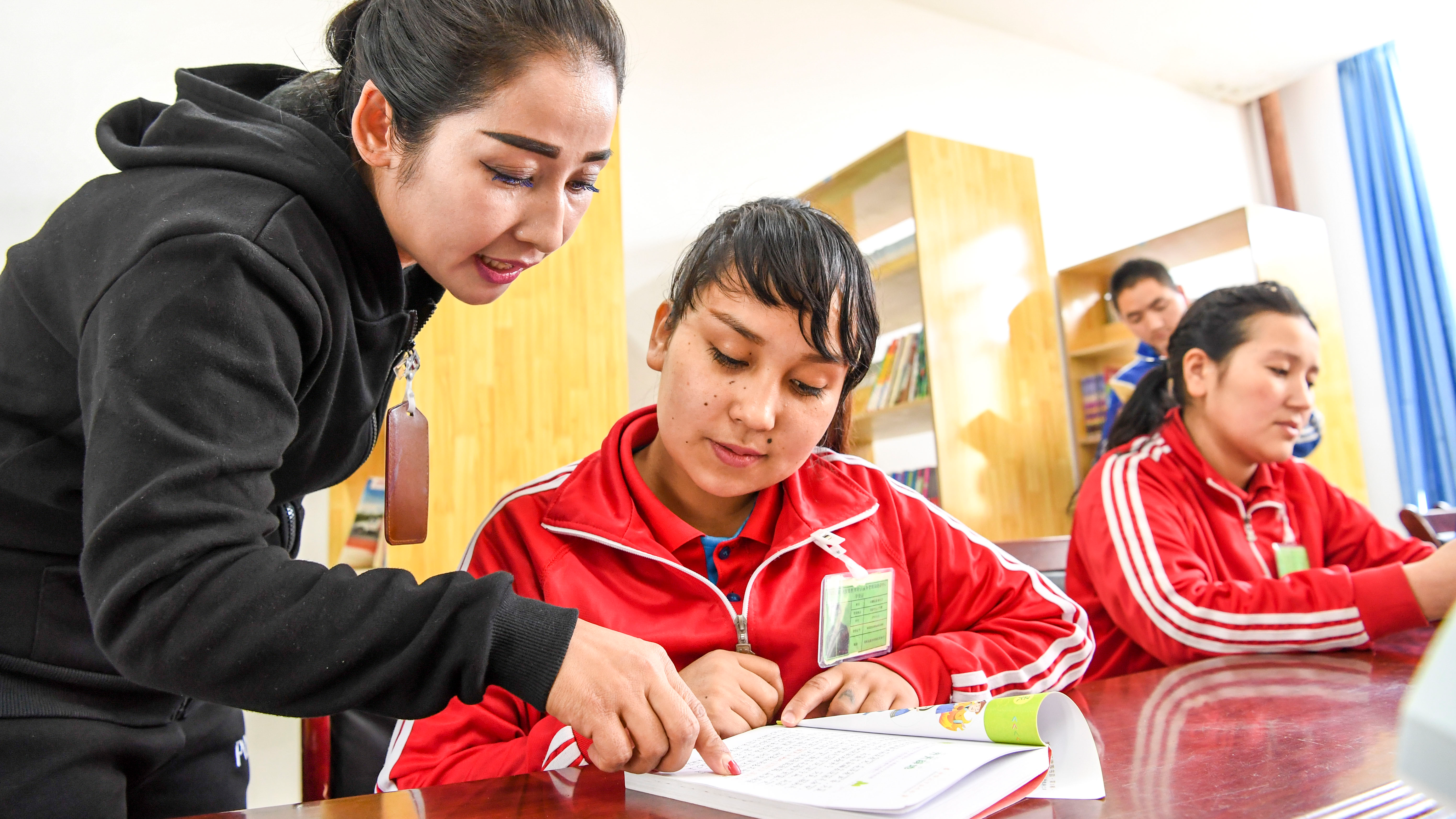 A teacher instructs a trainee at a reading room of the vocational education and training center in Hotan county of Hotan Prefecture, northwest China's Xinjiang Uygur Autonomous Region, October 7, 2018. /Xinhua

A teacher instructs a trainee at a reading room of the vocational education and training center in Hotan county of Hotan Prefecture, northwest China's Xinjiang Uygur Autonomous Region, October 7, 2018. /Xinhua

And let's consider the fate of the American Indian. Continually pushed westward to more and more restricted confines on their reservation, these original inhabitants of this North American continent have seen their conditions plunge lower in many cases than black Americans, who had been brought to this continent by force and in chains.

And genocide also has an economic side to it. When you try to reduce the level of consumption to below that which allows a population to reproduce itself at the same, or at a higher level, this can also be rightly labeled genocide. But this is precisely where the Biden administration's is heading with its much-touted "Green New Deal." While it is portrayed as a program to "save the environment," the economic costs of the program could effectively be "reducing the excess population" as Pastor Malthus so succinctly put it.

Because when you eliminate your coal and your gas and your oil consumption, and build thousands of windmills along the Eastern Seaboard and the Gulf coast, you can never reach the per capita energy-flux density provided by the fossil fuel plants you shut down. You could of course do this if you, for instance, build out nuclear power, as China is doing, but I have not heard President Biden utter the word "nuclear" since he took the oath of office, and most of the Green New Dealers are rabidly anti-nuclear. But not even thousands of costly windmills will do the trick.

Therefore this Green New Deal will inevitably lead to a general reduction of energy throughput per capita. But you need energy to build adequate housing, produce electricity, irrigate fields and all the things that modern society requires. Without it you reduce the population to ever lower standards of living, verging toward a "zero-growth" society. In a zero-growth society, the entire society becomes one big concentration camp, with "the excess population" dying off quite naturally as a result of the economic conditions.

So let's not play fast and loose with claims of "genocide" where they don't apply, thereby reducing a very important and clear concept to a level where it becomes absolutely meaningless. This would be an affront to all of those people who experienced a real genocide in Hitler's Germany. To the extent that China maintains "educational centers" as a means of containing terrorism and de-radicalizing individuals prone to the terrorist ideology in Xinjiang, it's clear these are not like Guantanamo. As the numerous reports coming out from region have clearly shown (and obviously been totally ignored by the biased Western media), people in these centers receive vocational training and language skills which will allow them to get gainful employment when they leave.

The centers themselves would no doubt become less important if there were not this continual agitation coming out of Western intelligence sources and their media hacks aimed at creating a "color revolution" in this important Western region of China. China will always take measures to prevent such from occurring. But the policy of the ruling Communist Party of China under President Xi Jinping has been very clear, and it is aimed at improving the livelihood of the people, as it has in Xinjiang with the elimination of poverty there as well. Maybe Chinese policy should be replicated by the West rather than criticized by it. Our own people might thereby become just a bit happier than they are at the present moment.