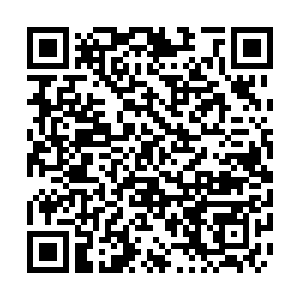 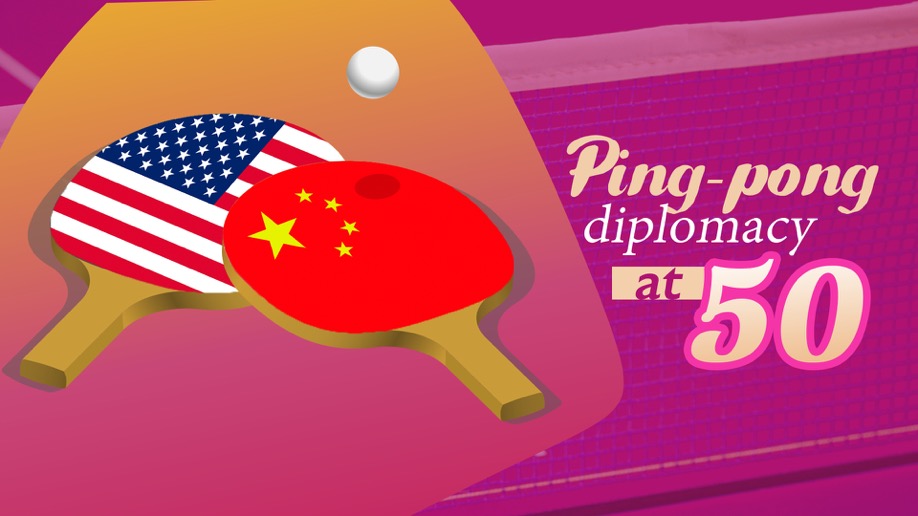 Though diplomats engaging with each other is often considered a muted affair, the history of diplomacy is littered with great stories. Few can top the "ping-pong" diplomacy that kickstarted contemporary China-U.S. relations.

History behind the game that changed the world

In April 1971, teams from the two countries had a chance encounter at the table tennis world championships in Nagoya, Japan. Glenn Cowan, a 19-year-old American player with long, shaggy hair and flare-legged trousers, boarded a wrong shuttle bus – one that carried the black-haired, red-shirted Chinese national team. After embarrassing silence of about 10 minutes on the bus, legendary Chinese player Zhuang Zedong reached out to shake hands with the hippie-style American youth.

This initiative move surprised, even shocked other members of the Chinese team, especially when it took place amid the height of the Cold War. Through an interpreter, Zhuang talked with young American named Cowan, and then presented him with a silk roll of China's Mount Huangshan as a gift. The next day, Cowan returned the favor by giving Zhuang a T-shirt with a peace symbol and lyric to the Beatles' song "Let It Be."

This exchange became an unexpected highlight of the Nagoya tournament. Chinese leaders seized on this goodwill by inviting the American team for an all-expense paid trip to China.

Days later, on April 10, the rag-tag group of American table tennis players set foot in China. For the next 10 days, they toured the cities of Shanghai, Guangzhou and Beijing. They had friendly matches against their world-class Chinese counterparts, with every step of their journey documented by a group of Western journalists. Everything during the travel was captured on film. Photographs displaying mirth, curiosity and culture shock, following the sensational news, largely brought Chinese and Americans closer at the grassroots level.

The trip came to a climax with the Americans meeting with then Chinese Premier Zhou Enlai at the Great Hall of the People in Beijing. Zhou, a senior diplomat himself, touted the visit as "a new chapter in the relations of the American and Chinese people." At the meeting, Zhou accepted the American offer to invite the Chinese team on a reciprocal visit to the U.S.

"The ping heard round the world," read the headline of an April 1971 Time Magazine issue, the cover of which Rufford Harrison, who back then led the American to Nagoya, was hanging in his home. The U.S. table tennis team had never imagined they could become the first Americans to visit China after 1949 and helped change the course of world history.

The Chinese and American ping-pong teams played a pivotal role in normalizing Sino-U.S. relations, as then U.S. President Richard Nixon eased trade embargoes and travel restrictions on China in mid-April. Three months later, his security advisor Henry Kissinger flew to Beijing secretly via Islamabad, paving the way for Nixon's fabled visit to China the next spring. By then, 22 years of the Cold War began thawing. As Chairman Mao Zedong put it, "The little ball moves the big ball."

The rest is history. 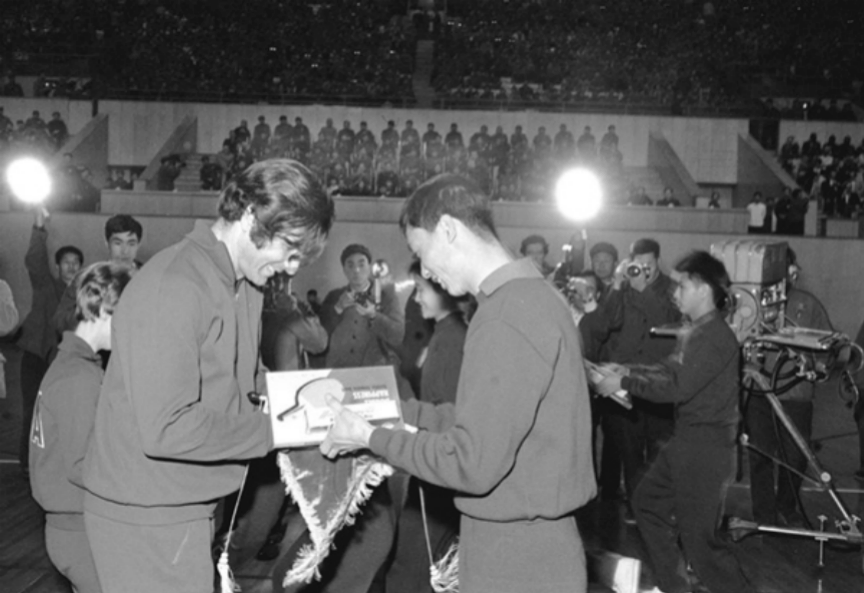 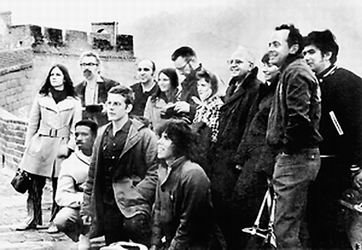 American table tennis players visit the Great Wall, after becoming the first Americans to set foot in China after 1949, in April 1971. /Xinhua

American table tennis players visit the Great Wall, after becoming the first Americans to set foot in China after 1949, in April 1971. /Xinhua 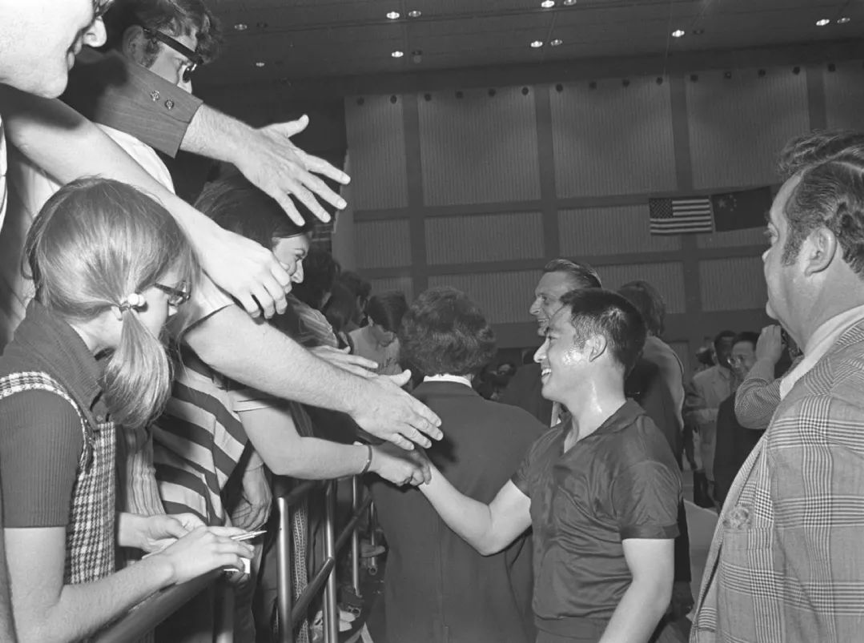 Zhuang Zedong, leader of the visiting Chinese table tennis team to the U.S., shakes hands with spectators, in April 1972. /Xinhua

Zhuang Zedong, leader of the visiting Chinese table tennis team to the U.S., shakes hands with spectators, in April 1972. /Xinhua

Five decades on, ties at crossroads

Fast forward to modern international relations, the goodwill that initiated this bilateral engagement has been eclipsed by the trade war, tech ban, blame game over the pandemic and anti-Asian sentiment, among others. Can these two countries use the lessons of history to effect positive change?

"Don't expect a great revival of high-level dialogue," said famed China expert Kenneth Lieberthal, at a virtual meeting held by the Institute of American Studies of the Chinese Academy of Social Sciences (CASS) and the U.S. non-partisan Kettering Foundation.

While serving as the director of the University of Michigan's Center for Chinese Studies, Lieberthal participated in the 30th anniversary of ping-pong diplomacy along with former Chinese Foreign Minister Li Zhaoxing at the university – the place that hosted the Chinese ping-pong team in April 1972. The university and Ann Arbor, the city where it's nestled, have developed an evolving rapprochement with Chinese scholars and students.

During Lieberthal's tenure as special assistant to former U.S. President Bill Clinton and Asian Affairs Director at the National Security Council, Sino-American ties ushered in a major watershed moment with both pledging to build a "constructive strategic partnership."

The veteran China-U.S. observer who wrote some 100 books and articles on China's elite politics, economy and foreign policies, believes that during today's geopolitical landscape, Beijing and Washington won't rapidly reembrace each other but can seek cooperation in climate change, pandemic control, nuclear nonproliferation and dealing with the Democratic People's Republic of Korea.

Other experts at the virtual meeting largely agree with Lieberthal's views that both sides can cooperate where their interests converge. Meanwhile, they are not that sanguine about the China-U.S. ties in the coming years. 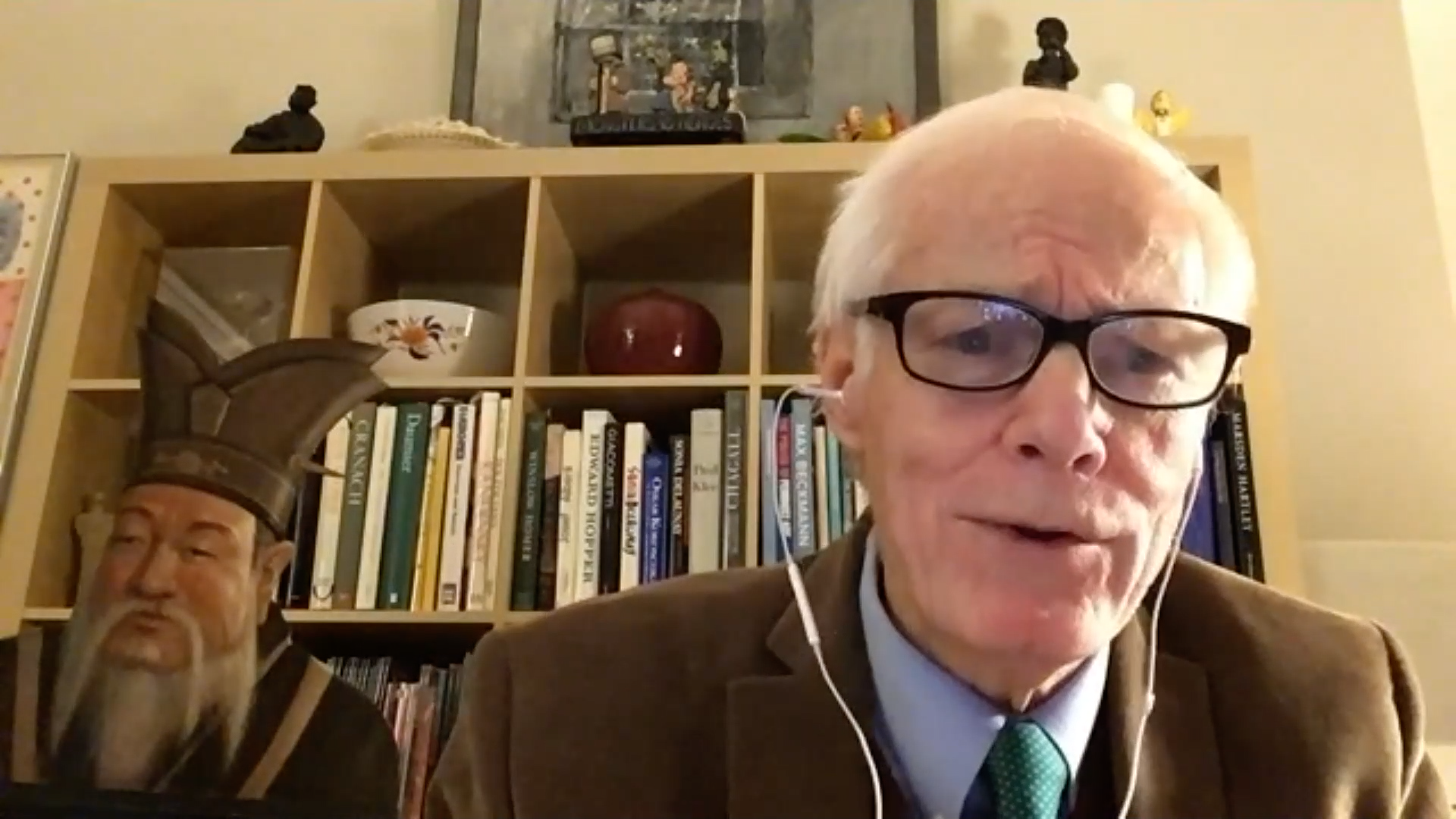 "Over the past few years, we have developed a strange feeling toward each other to some extent and are probably entering uncharted waters where maintaining a stable relationship is more difficult than before," said Ni Feng, director of the Institute of American Studies at CASS. He suggested that both sides look forward with what Kissinger described as "co-evolution" and seek answers to the stalemate by looking back at history.

"It's been self-evident for decades that peace in the world in the 21st century is going to be heavily dependent upon U.S.-China relations. Both camps are going to have put a great deal of emphasis on caution," noted James Leach, former U.S. House Representative. "I think we can come through this."

If there's one thing to take away from decades of diplomatic engagement, it's that soft bonding can play a crucial role in navigating uncharted bilateral waters.