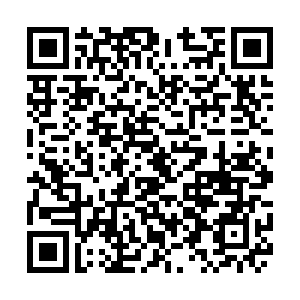 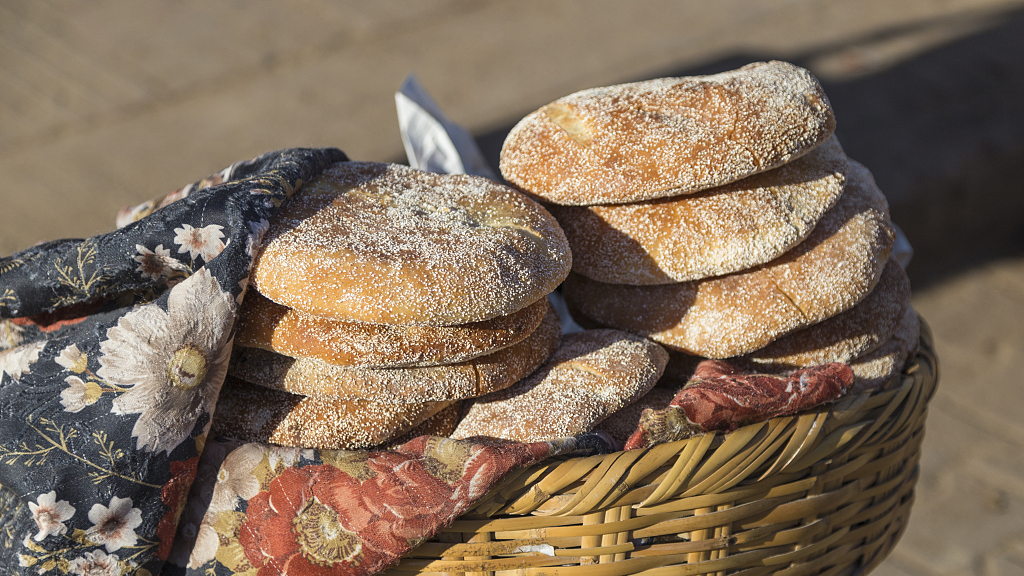 Bread is universal, versatile and without it the world would not be the same. /CFP

Bread is universal, versatile and without it the world would not be the same. /CFP

Whichever way you slice it, bread is a delicious bite of culture. Customs and traditions are built around this dietary staple, folk beliefs and rituals permeate its preparation and consuming it is imbibed with symbolism. The humble loaf is an identity, a way of life and a connection with others and to the past.

France is looking to add its iconic baguette to the UNESCO List of Intangible Cultural Heritage as a way to celebrate a culinary treasure at a time when artisanal boulangeries are closing and mechanization is sacrificing craftsmanship for convenience.

The designation covers oral traditions, skills, ceremonies and practices interwoven in the cultural fabric of a country, from the Chinese Peking Opera to Turkish oil wrestling and Spanish flamenco.

Here's what bread means for communities whose doughy delights – and the dense knowledge they pack – have already made the cut and secured the prestigious status: 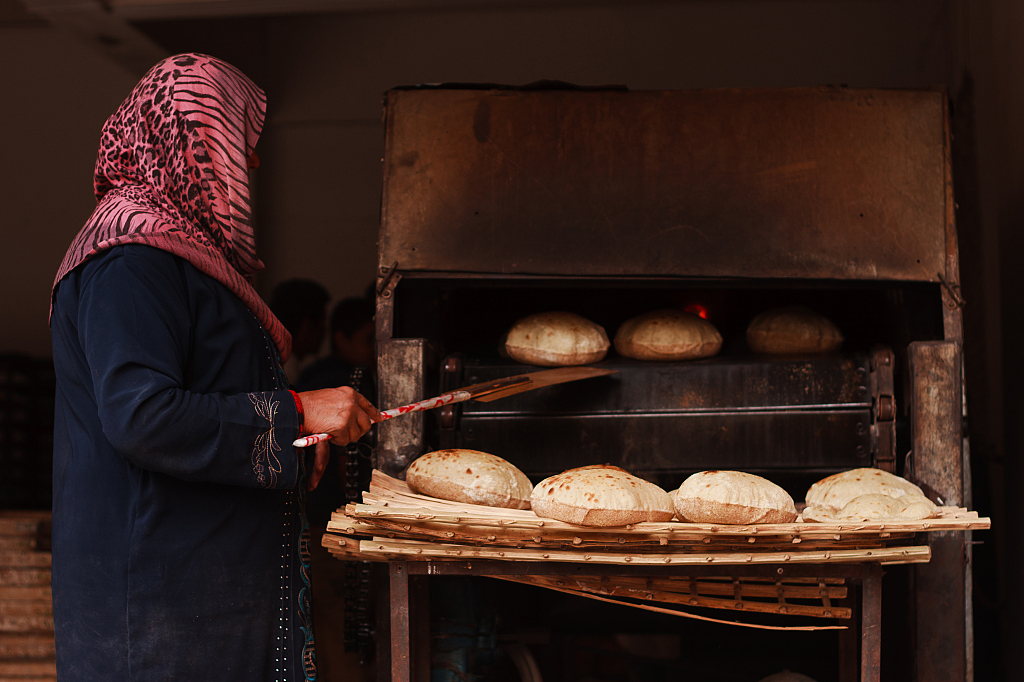 Egyptians call bread "aish," which translates into life – a sign of the staple's importance to them. /CFP

Egyptians call bread "aish," which translates into life – a sign of the staple's importance to them. /CFP

Bread was an antidote to solitude in lockdown, and baking triumphs and disasters lent cooks trapped indoors a sense of connection at a time when social distancing was the norm. Such is the power of bread in forging bonds that in societies around the world its preparation is a collective ritual.

In Armenia, lavash is a centerpiece of the dining table and an exercise in community building and socialization. It takes a village to make this exacting flatbread and during long baking days, families come together, neighbors interact and a cultural relay that by some accounts lasted for nearly three millennia continues its course. 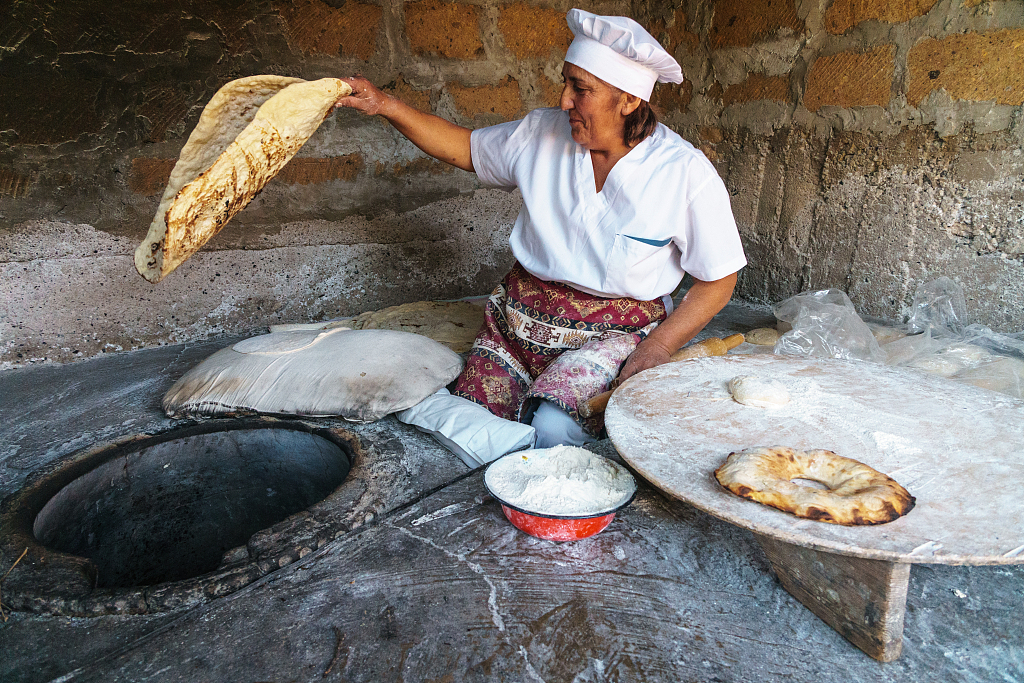 Lavash is the bread of choice in Armenia, baked on the walls of an underground oven. In villages, making lavash is part of preparing for the winter as the thin sheets can last for a long time. /CFP

Lavash is the bread of choice in Armenia, baked on the walls of an underground oven. In villages, making lavash is part of preparing for the winter as the thin sheets can last for a long time. /CFP

Women join hands in groups of three, or up to five, with the family's matriarch kneading the dough – in its basic form a mixture of flour, water and sometimes a sourdough starter – and infusing it with blessings and prayers. Balls are then shaped, rolled into large sheets, stretched on a special cushion and smacked against the walls of a tonir, a cylindrical clay oven dug in the ground, in a swift and precise action. Within seconds, the leaf-thin pieces bubble up and take on beautiful charred spots.

Churning out lavash requires a great deal of skills, but more importantly, good spirits. The traditional belief goes that the dough can sense, soak up and pass on a baker's emotions, and so only happy women are entrusted with the dough.

You can't spell companion without bread. The Latin origin of the word – companis – translates into "with bread" to refer to a person with whom one shares a bite. This intricate relationship between conviviality and carbs is on full display in societies across Western and Central Asia where flatbreads feed not just the body, but also ties of friendship. 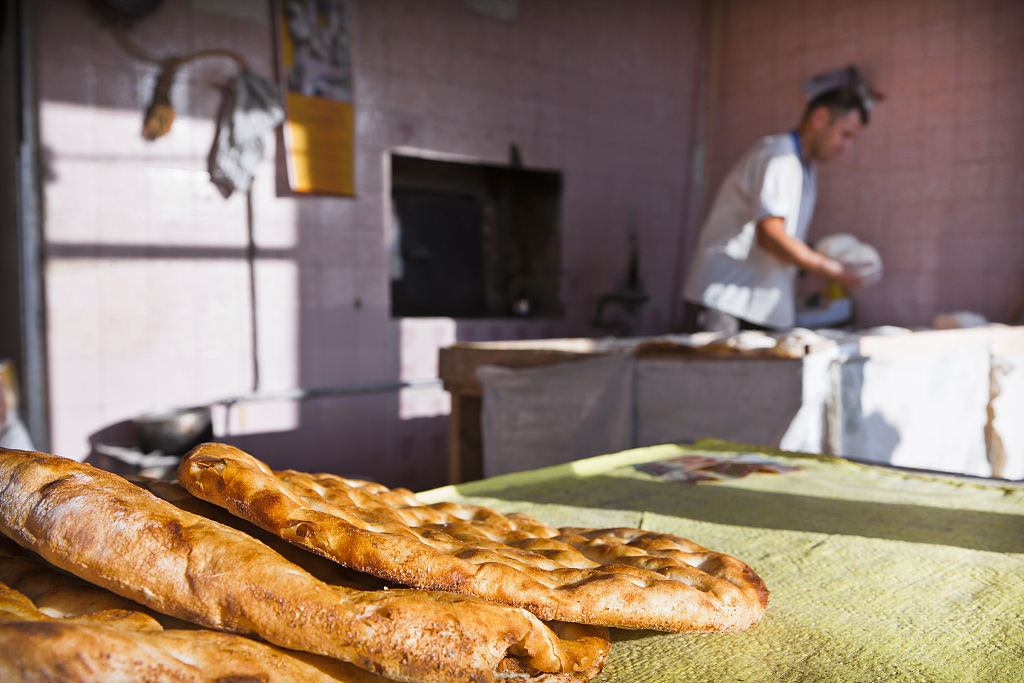 Bread accompanies a number of religious and social occasions in Iran. /CFP

Bread accompanies a number of religious and social occasions in Iran. /CFP

There, the staff of life is the stuff that holds a community together, striking the perfect balance between everyday utility and ceremonial value. When a family is baking, neighbors and relatives get a portion as a gesture of goodwill and house guests as well as passersby are treated to a few piping hot slices in an expression of hospitality. Swearing on bread is also a sacred act meant to convey the sincerity of one's words.

In joy and sorrow, bread is consumed and distributed. Lavash is draped on the shoulder of an Azerbaijani bride by her mother-in-law for good wishes while dried yufka, a type of unleavened bread, is crumbled over the head of a Turkish woman on her wedding day. Iranian families distribute bread when a child is born or a person dies to attract blessings, while in Kyrgyzstan the wafer-thin jupka is given to the sick and breastfeeding women to restore their strength.

Breaking bread isn't just to connect with the living. Rural Kazakhstani families kindle their ovens to make katyrma on Thursdays and Fridays in a deep-rooted custom to remember the deceased. The thin sheets of this yeast- and oil-free bread double as a hat that protect the dead as they make the crossing from this world to the other.

It's hard to overstate just how much bread has shaped human history. Its abundance built cities and civilizations, and when supplies fell, empires crumbled and the ruling class felt the pinch. Malta knows this all too well.

Long under the influence of successive colonial powers, the archipelago's strive for sovereignty was spurred in part by rising flour prices. In 1919, the Maltese took to the streets against British forces as bread became out of reach. Although independence would only come decades later, in 1964, the Sette Giugno uprising has come down in history as the opening salvo that wrote the country's future – and its culinary impact remains deliciously tangible in the bread-crazy republic. 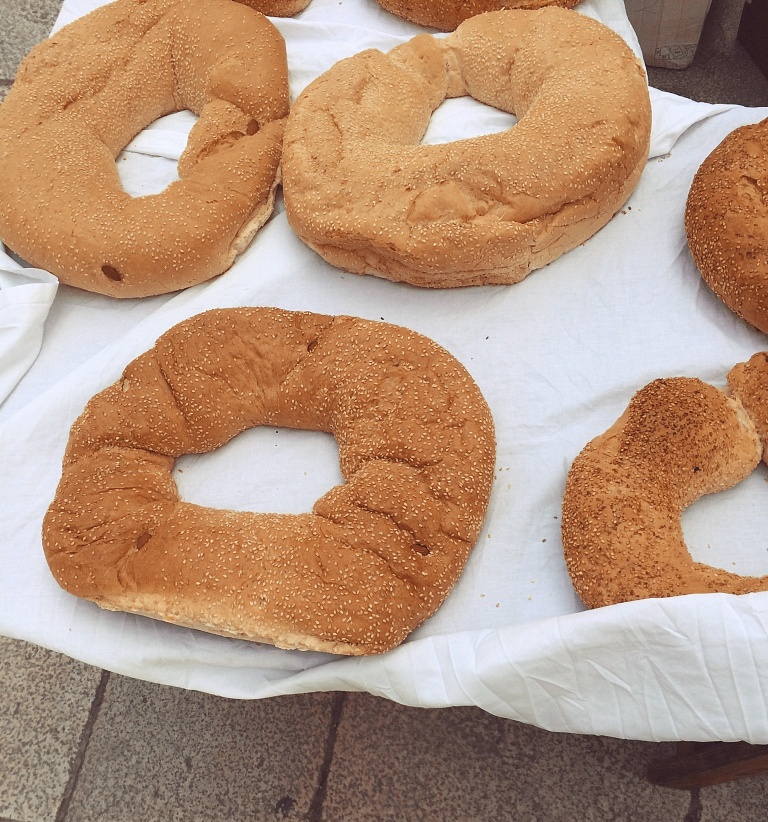 The Maltese ftira is a sourdough bread that's been pinched in the middle to prevent the dough from rising and to accelerate its cooking time. /VCG

The Maltese ftira is a sourdough bread that's been pinched in the middle to prevent the dough from rising and to accelerate its cooking time. /VCG

Il-ftira, a flattened sourdough bread with a hole punched in the middle similar to a bagel, is Malta's national pride with only around 200 practitioners keeping the tradition alive.

The product of intercultural mixing, it borrows the Arabic term for pie and is thought to have been born in the ovens of present-day capital Valetta, when Malta was ruled as a vassal state of the Kingdom of Sicily in the 16th century. The staple has conquered the local palate and language, entering the vernacular in the form of idioms and expressions. For example, "Il-ftira shuna tajba," or "the ftira is good while it is warm," refers to seizing an opportunity immediately.

Breadmaking is a science. Too much flour, not enough kneading, over-proofing the dough or the wrong oven temperature can all cause the experiment to go bust. But there's a reason why bakers don't walk around in lab coats: what they do is also art – just ask a pizzaiuolo.

In Naples, the Italian city that gave the world the prized pizza, becoming a master pie maker requires years of apprenticeship and a lot more than the mastery of juggling and twirling the dough, spectacular as that might be. 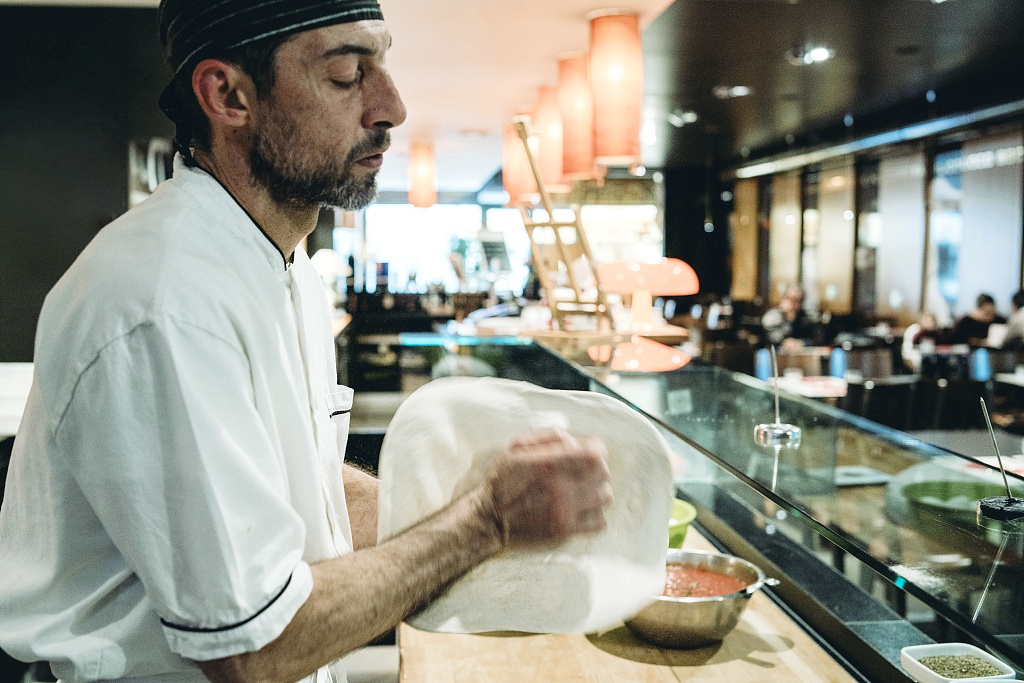 Tossing the pizza dough and making it dance from arm to arm isn't just for show, but is meant to aerate the crust for a crispy finishing. /CFP

Tossing the pizza dough and making it dance from arm to arm isn't just for show, but is meant to aerate the crust for a crispy finishing. /CFP

The artistry stretches over the whole preparation, and techniques, tricks and tips for working the dough, stretching it into a rimmed disc and getting the perfect blistering are transmitted from mentor, or masto in local dialect, to trainee and inherited by family members across generations.

The know-how transfer is also paired with the dissemination of traditions and customs. Tossing the dough in the air for example is a condition for a crispier crust, but the nimble movement goes hand in hand with traditional singing and storytelling, which turn the pizzamaking process into a social ritual.

Inheritance is associated with a lot of things: property, silverware, heirloom engagement rings, maybe even receding hairlines. Recipe cards don't exactly pop up to mind, but in Croatia, the craft behind a confection that has come to symbolize the country is a family affair, passed down since the 1600.

Licitar is a type of gingerbread from the northern regions of Croatia with roots in European convents. Despite the name, the cookies don't feature any ginger, and although technically edible, the sweets are not meant to be consumed. Instead, they serve as colorful trinkets to embellish Christmas trees, a Valentine's Day gift in lieu of flowers, and a souvenir at wedding ceremonies or parish festivals. 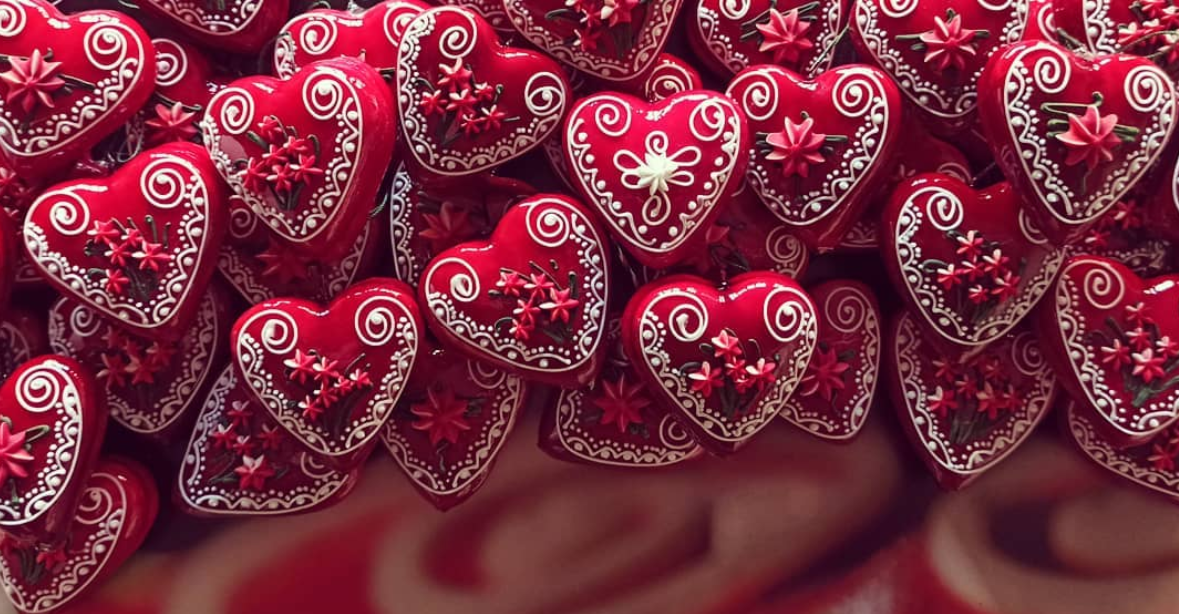 The heart-shaped licitar or gingerbread cookies are meant to be a feast for the eyes, not the stomach. Josiprano/ Instagram

The heart-shaped licitar or gingerbread cookies are meant to be a feast for the eyes, not the stomach. Josiprano/ Instagram

The rock-solid biscuits, which can take up to two weeks from start to finish, run the gamut of shapes from horses to slippers to mushrooms and are festooned with colorful icing decorations. But the most iconic motif remains the heart, dipped in bright red and completed with a tiny mirror – thought to reveal one's soulmate in its reflection – and sometimes a message of affection.

There's no cookie-cutter formula to making licitar and regional varieties and family recipes attest to the range of the craft's richness. Knowledge is handed down from parent to child with every generation contributing to the repertoire of techniques and designs.

As successive artisans honed and molded the craft into their image with the guiding touch of their predecessors, the profession inevitably also shaped its masters. Men historically were tasked with keeping the legacy alive, but as the number of inheritors dwindled in the 20th century, women joined the fold. With time, craftspeople have also come to be known by their licitar lineage, with the skill becoming a family marker much like a last name.