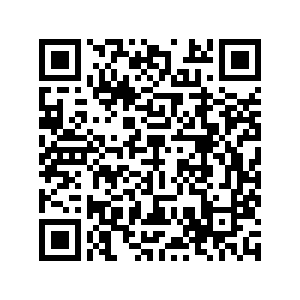 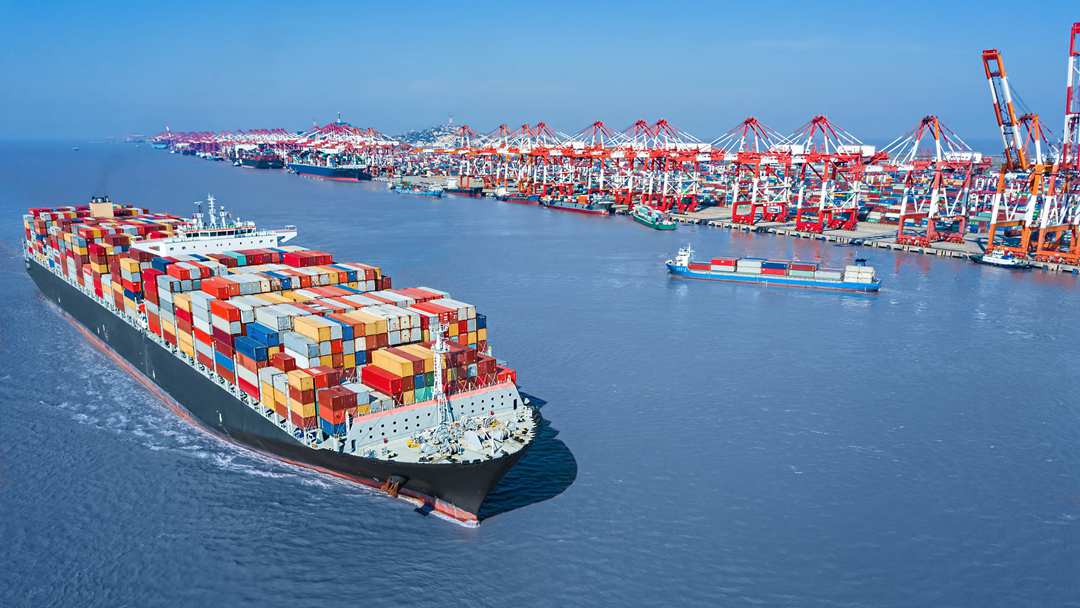 China's foreign trade volume totaled $1.3 trillion in the first quarter of 2021, up by 38.6 percent year on year, with overseas demand driving a jump in exports, data released by the General Administration of Customs showed on Tuesday.

"The growth rates of exports and imports have continued to beat historical trends in the past decade. ASEAN countries remained to be China's No.1 trading partner, surpassing EU and the U.S.," Wang Dan, chief economist at Hang Seng Bank China told CGTN.

"It suggests that the regional integration of Asian supply chains centering around China has been strengthened. This is a trend that had been reinforced after the pandemic, which was also helped by the signing of RCEP [the Regional Comprehensive Economic Partnership]."

Chinese exports have benefited from stronger overseas demand for Chinese goods as the global economy continues to recover amid accelerated vaccination efforts. U.S. factory activity picked up in March amid strong growth in new orders, and the growth in Eurozone monthly factory activity was the fastest on record.

"In the U.S. and EU, government subsidies to consumers have supported their demand for consumer goods, and much of that demand has translated into China's exports. That's why China's cross-border e-commerce is experiencing a boom," Wang said.

Joe Biden's $1.9-trillion stimulus package will add more fuel to global demand, which will have a spillover effect on China's exports, she added.

However, Lu Ting, chief China economist at Nomura held a cautious attitude, expecting China's export growth to drop further to 10-15 percent year on year in April and its slowdown to be more significant in the second half of this year, due to the waning of favorable base effects that could even reverse in the coming months.

China's economic performance in the first quarter was stronger than its pre-pandemic levels, said Shen Lan, an economist at Standard Chartered Global Research.

Shen expected China's export to maintain the strength in Q2, adding the increase depended on the sufficient supply of medical and electronic products.

"But we are still concerned that the growth is not sustainable ... relying on pandemic-related products," Shen said, proposing to shift the focus to consumer and investment-related goods to safeguard China's export recovery. 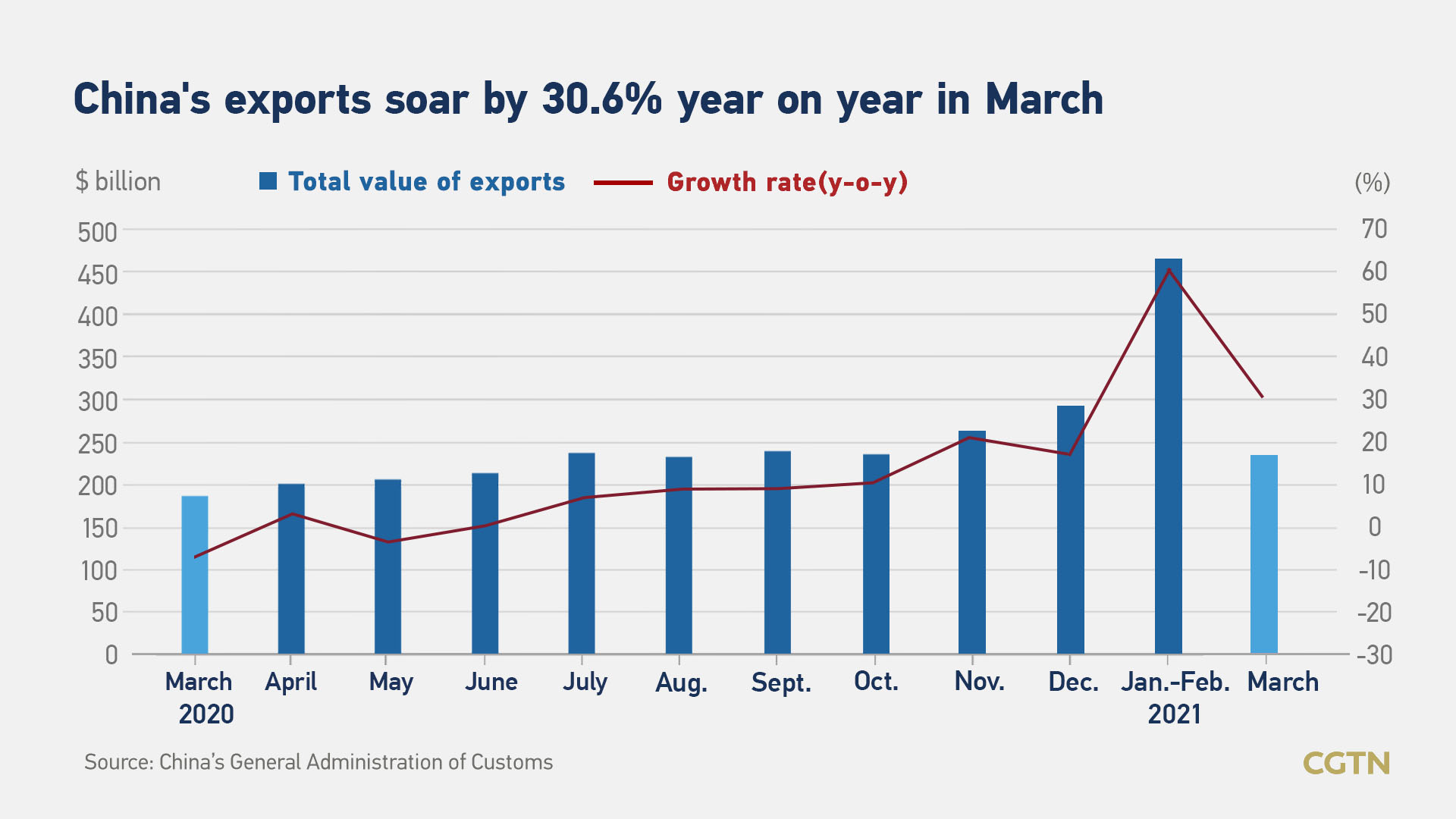 In March, China's exports increased by 30.6 percent from a year earlier, lower than an estimated rise of 35.5 percent, according to a median forecast in a Reuters poll of 27 economists earlier.

Although the expected exports growth in March is much lower than the 60.6-percent surge in January-February, it still reflects a robust growth, as the year-ago level during January-February was a much lower base suffering from a deeper contraction while the COVID-19 epidemic in China was passing through its peak. 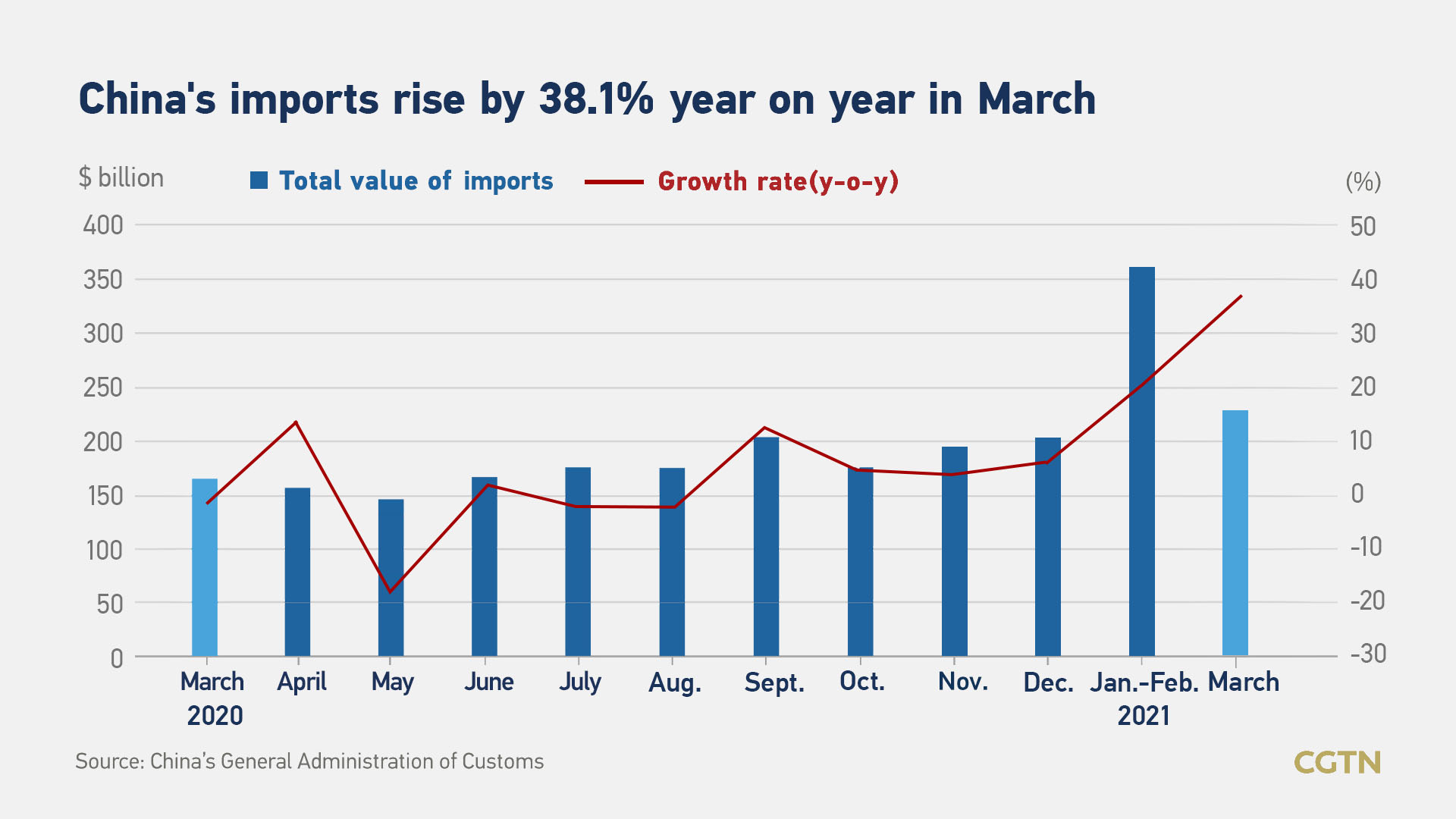 "Import growth accelerated mostly due to surging prices in commodities, especially in energy and feed. The trade surplus had therefore declined, reducing some of the appreciation pressure for yuan," Wang said.

"Yet the rising commodity prices did add to China's production cost," she added.

"A small silver-lining is that the cost was mostly distributed among mid-stream and lower stream producers, but not much to final consumers. That's why we saw profits of those producers being squeezed, but only very little increase in consumer inflation."

Wang said imports of high-tech components have also surged as global demand of electronics recover, along with China's effort to upgrade.

According to Lu, China's import growth may surge to 50-60 percent year on year in April-May mainly on a very low base, in addition to the domestic demand recovery, higher commodity prices and strong yuan appreciation since June 2020.

China's foreign trade has maintained recovery, and there are more positive factors, said Li Kuiwen, a spokesperson of the General Administration of Customs and director general of the Department of Statistics and Analysis.

However, as the COVID-19 pandemic is still spreading globally, causing a complicated and severe global economic situation, China's foreign trade is still facing many unstable and uncertain factors, Li cautioned.

"The trade surplus may significantly narrow in coming quarters and even record deficits in some months, which would represent a sharp reversal of huge trade surpluses over the past several months and weigh on China's current account balance," said Lu.

"While we expect export growth to slow, it will most likely remain in positive territory in the coming months despite the higher base," said Lu, noting that the expected slowdown in export growth and the falling trade surplus are some of the reasons why they expect no sharp shift in Beijing's policy stance.

"We expect trade to uphold the momentum in 2021. In the first half, the export is still likely to be dominated by COVID-19 related goods, like medical devices and daily necessities, but in the second half, export will be driven by industries and consumers as the global economy returns to normal," Wang added.