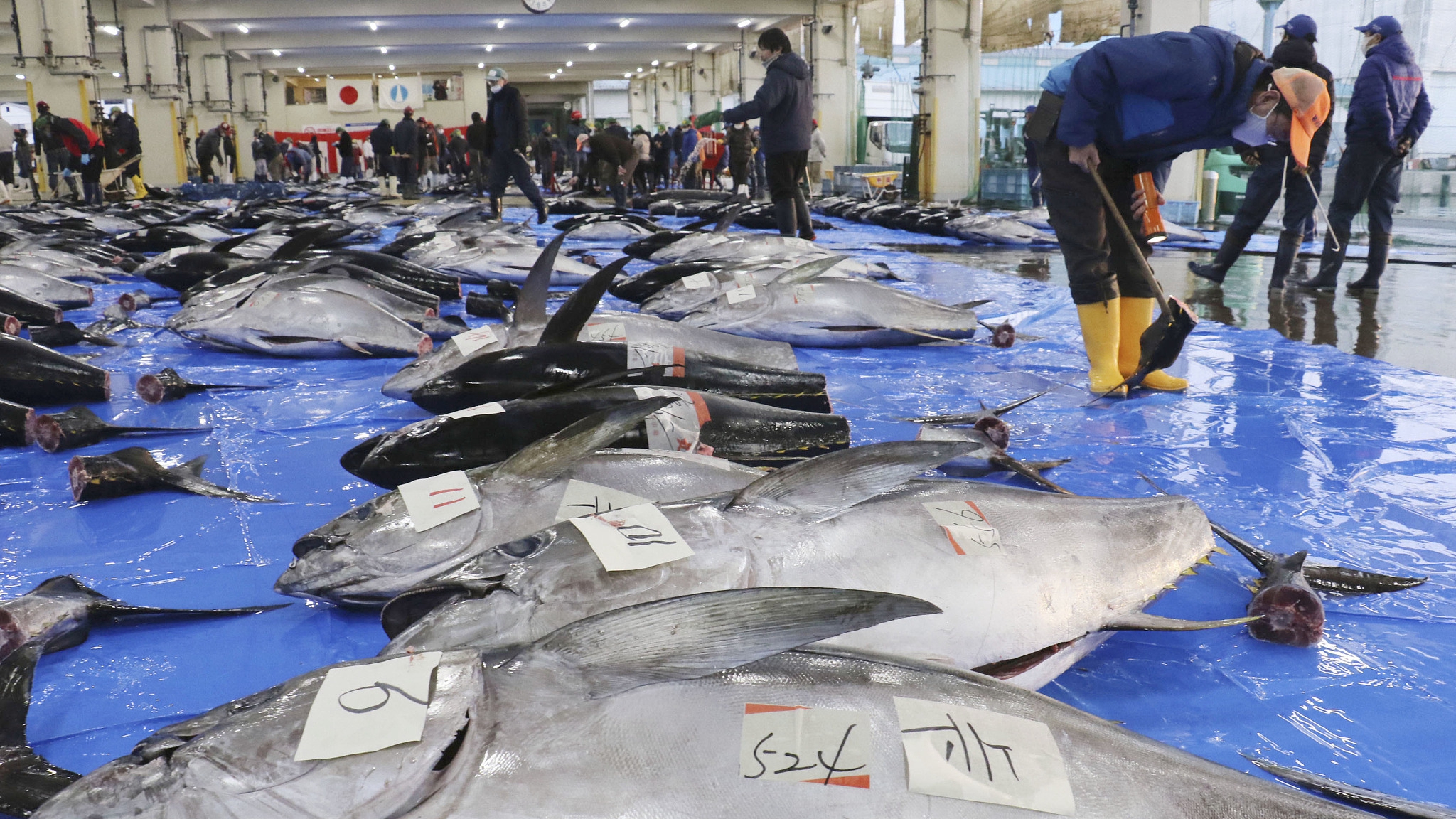 Tuna lined up for the year's first auction at a market in Nachikatsuura in Wakayama Prefecture, western Japan, January 4, 2021. /CFP

Tuna lined up for the year's first auction at a market in Nachikatsuura in Wakayama Prefecture, western Japan, January 4, 2021. /CFP

For seafood lovers across the world, this could really be bad news: Japan has officially decided to discharge over 1 million tonnes of contaminated nuclear wastewater into the Pacific Ocean.

Massive amount of radiation-tainted wastewater has been generated at the Fukushima Daiichi nuclear plant since the 2011 nuclear meltdown triggered by an earthquake. Water has since been used to cool the damaged reactors.

The release of the wastewater to the Pacific Ocean will start in two years, said the plant's operator Tokyo Electric Power Company Holdings Inc.

Before the discharge plan is put into practice, Japan owes the world an explanation on how this controversial dumping could affect the safety of seafood and people's health.

Long-time damage to the ocean and lives

Although Tokyo Electric Power Company said the wastewater has been treated with an advanced liquid processing system to remove most contaminants, some radioactive byproduct of nuclear reactors are hard to filter out.

In 2018, a test within 20 kilometers of the Fukushima Daiichi nuclear power plant found that 358 becquerels of cesium was carried by small-finned rosefish per kilogram, with the highest radioactive concentration hitting 1,880 becquerels per kilogram of the sample, 18 times more than the standard.

According to a study published in the journal Science last August, radioactive isotopes that remain in the treated water in the tanks in Fukushima include carbon-14, cobalt-60 and strontium-90, a radionuclide that can cause cancer.

These and the other isotopes that remain in the water all take a very long time to decay. For example, carbon-14 has a half-life (the time required for a radioactive substance to lose 50 percent of its radioactivity by decay) of 5,370 years.

Such isotopes can be absorbed easily by seafloor sediments and marine life like fish, according to the study.

Experiments have shown that long-time and large-quantity consumption of radiation-contaminated seafood may result in the excessive accumulation of radioactive substance in the human body, causing damage to one's hematopoietic organs, endocrine system and nervous system, according to a paper by China's National Marine Environment Monitoring Center.

Ken Buesseler, author of the paper in Science and a marine chemist at the Woods Hole Oceanographic Institution, wrote that "any option that involves ocean releases would need independent groups keeping track of all of the potential contaminants in seawater, the seafloor, and marine life."

"The health of the ocean and the livelihoods of countless people rely on this being done right," he added.

Damage not limited to surrounding countries

Don't think it's a problem only for Japan and surrounding countries such as China and South Korea, as partial currents will eventually integrate with the whole ocean.

It would only take 57 days for the radioactive materials from Japan's contaminated water to spread to most of the Pacific Ocean, three years to reach the coastal areas of the U.S. and Canada, and 10 years to spread worldwide, according to a research in 2012 by Helmholtz Center for Ocean Research Kiel (GEOMAR), a marine research institute in Germany.

Despite an argument that the ocean has self-purification ability and could restore its ecological environment by itself, Liu said the discharge of such large quantity of contaminated water will definitely have considerable negative impact on the maritime environment.

"Unless we see this issue in the span of thousands of years, the adverse effects of the disposal in the ocean will not disappear in a short period of time or even a few hundred years," Zhu told the Global Times.