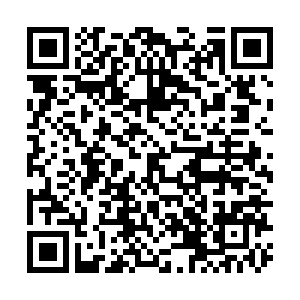 Last week, the Japanese government, regardless of strong opposition from its citizens, environment groups and neighboring countries, approved and announced a plan to release millions of tonnes of nuclear wastewater from the wrecked Fukushima nuclear plant into the ocean.

Tokyo said the wastewater will be treated and diluted before being pumped into the Pacific Ocean. Prime Minister Yoshihide Suga told a meeting on Tuesday that the decision was the "most realistic" option, and "unavoidable in order to achieve Fukushima's recovery."

If it is so essential, why are locals protesting against the move? Why are environmental activists criticizing the government's action? What are concerns mounting out Japan's neighboring countries? 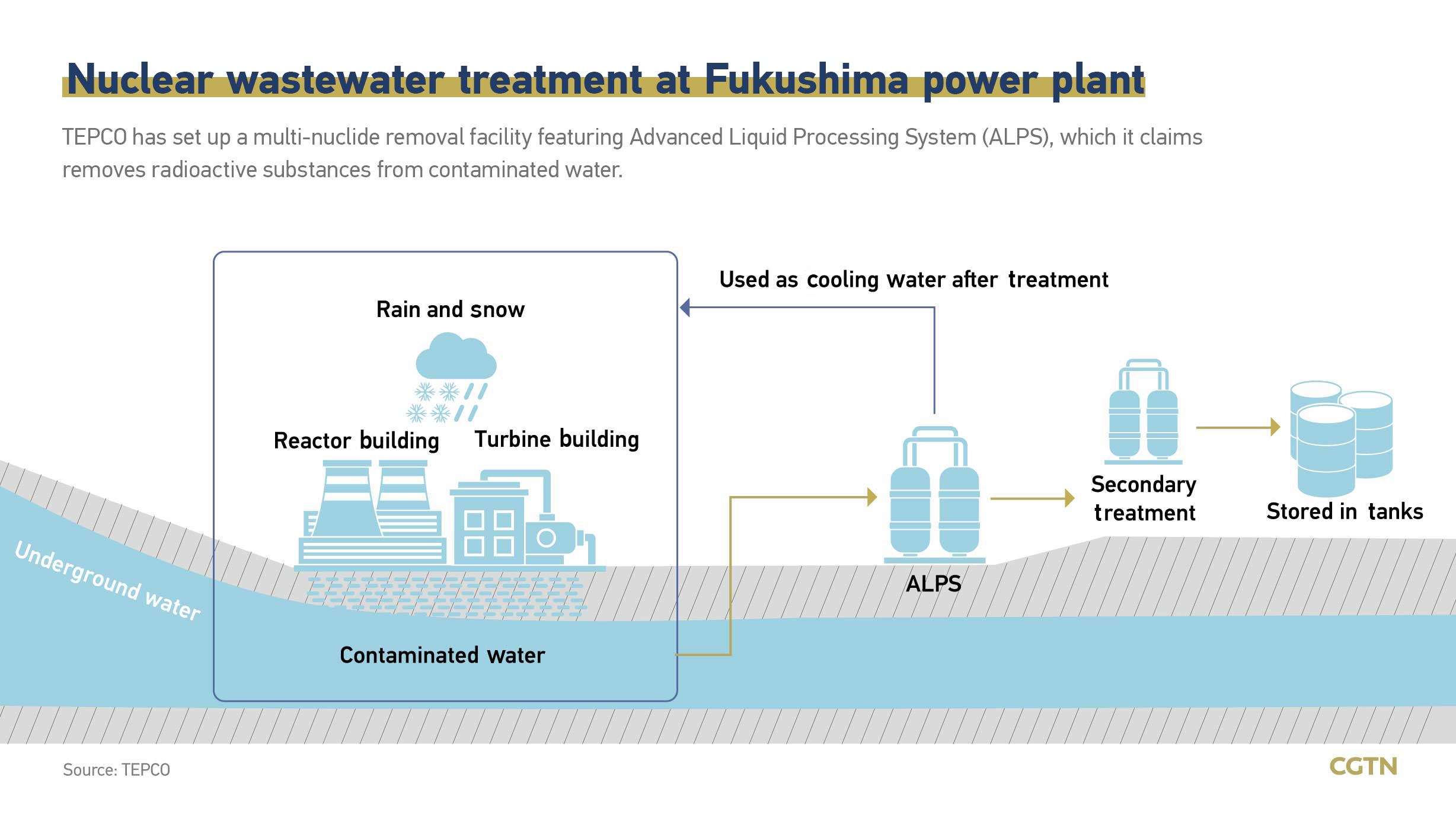 The Tokyo Electric Power Company (TEPCO), owner of the Fukushima nuclear plants, developed a specific system to treat the contaminated wastewater which was produced when the plants were crippled by a 9-magnitude earthquake and a deadly tsunami it triggered in 2011.

Their multi-nuclide removal facility – Advanced Liquid Processing System (ALPS) – is claimed to be able to reduce concentrations of radionuclides in the contaminated wastewater to non-detectable levels.

But, according to a report released last year by Greenpeace, a non-governmental environmental organization, from the treated wastewater being stored in tanks, concentrations of 62 radionuclides not including tritium have been found to surpass emission standards, with the highest levels reaching 19,909 times the regulatory levels. As much as 72 percent of the wastewater in storage tanks is required to be processed again. 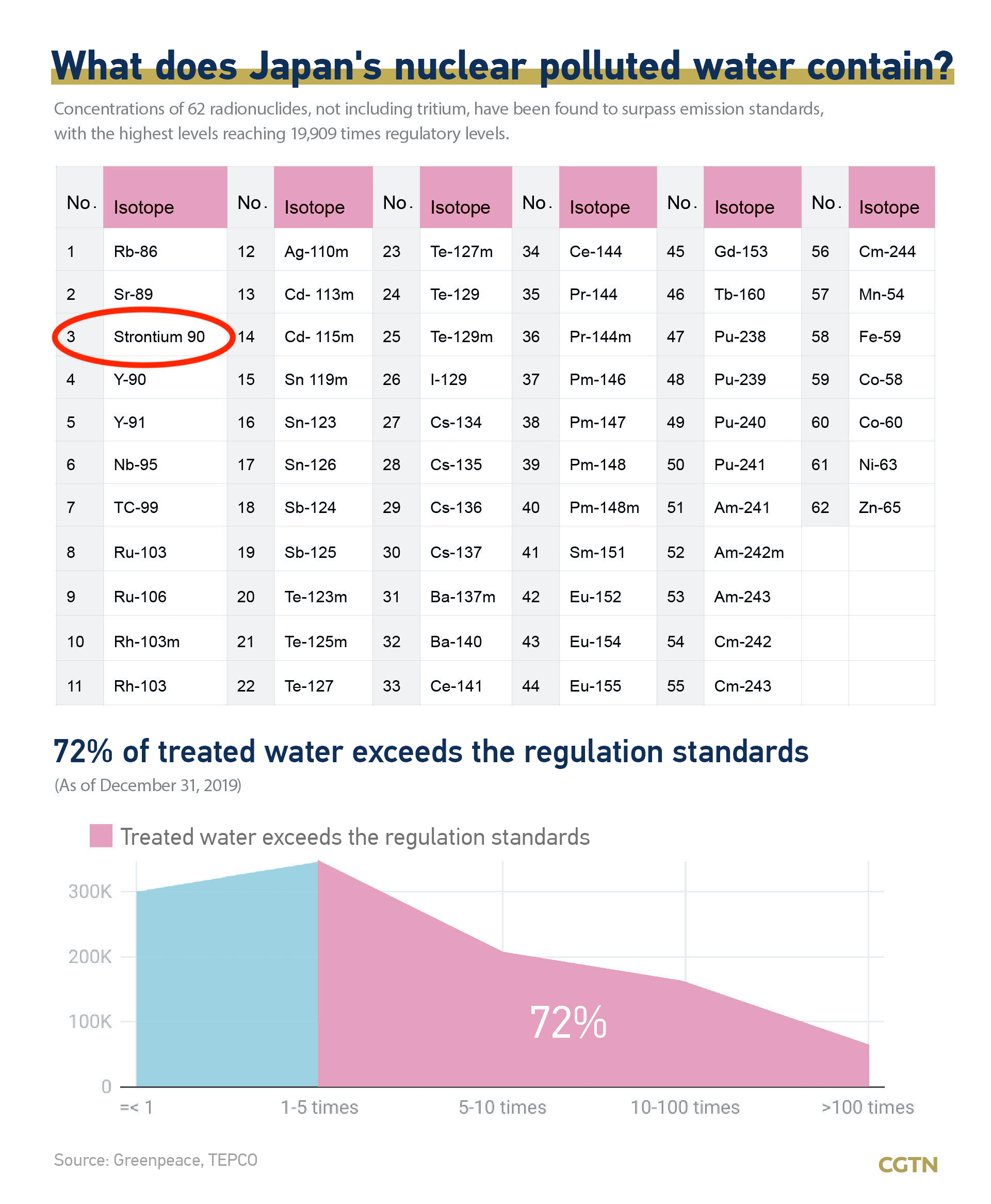 Strontium-90 (Sr-90) is among the radionuclides detected in the contaminated wastewater and highlighted in Greenpeace's latest report published in March. It is a bone seeking isotope which if ingested concentrates in bones and bone marrow, increasing the risks of contracting cancer. A smaller but significant amount is still present in the contaminated tank water stored at the site, the report shows.

Besides the presence of tritium, strontium and cesium, others such as plutonium in the treated wastewater could take hundreds of years to decay and, in turn, affect marine and human lives, according to studies published in reputed journals.

At the time when the accident occurred, TEPCO used more than 1 million tonne of water to cool the melted reactors. About 1.3 million tonnes of radioactive wastewater – the volume able to fill 500 Olympic-sized swimming pools - is currently stored in the tanks on the grounds of the Fukushima Daiichi Nuclear Power station. 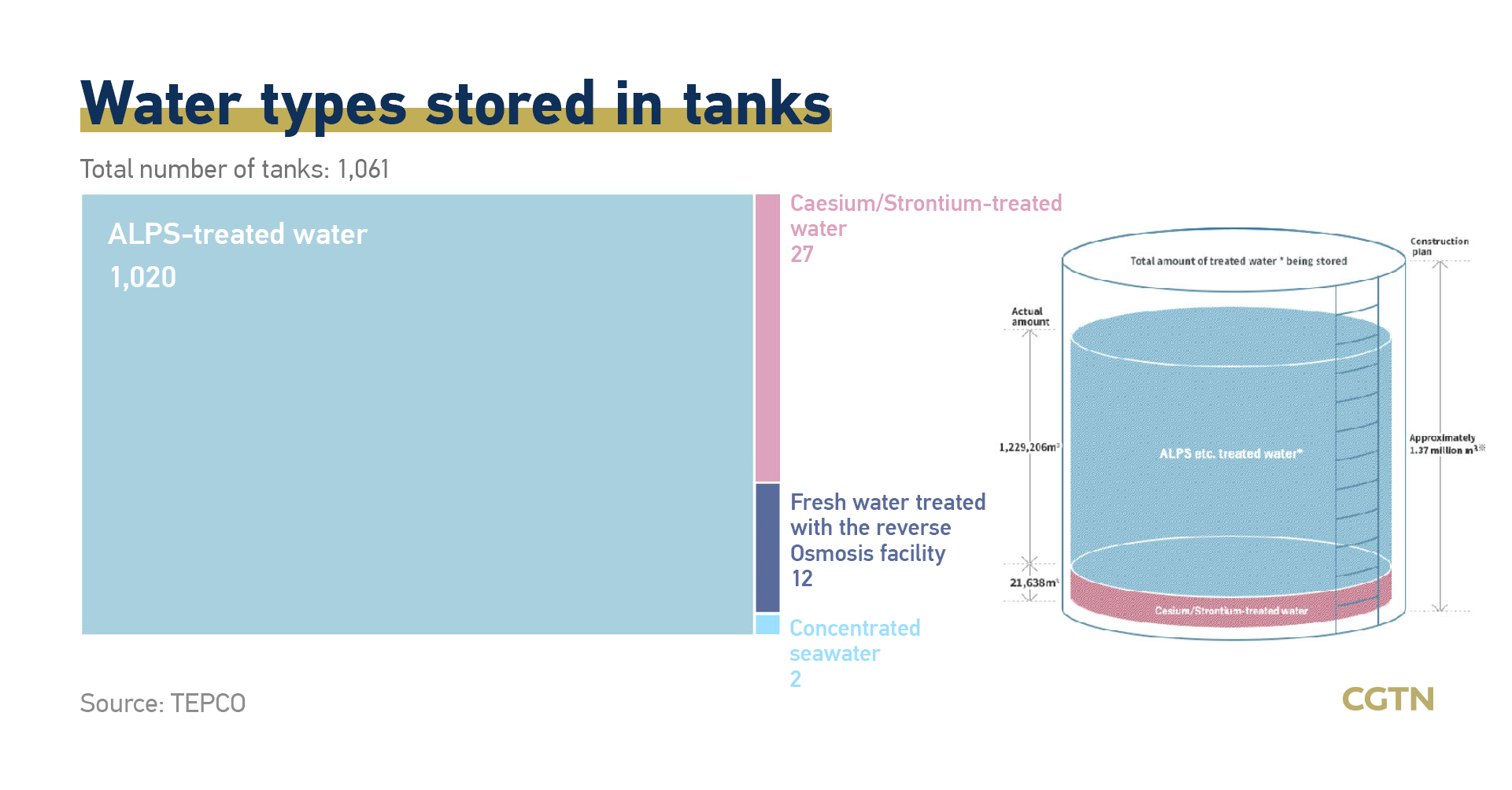 Over the years, the amount of wastewater in the tanks has continued to increase due to rainfall and groundwater flowing into the storage site. 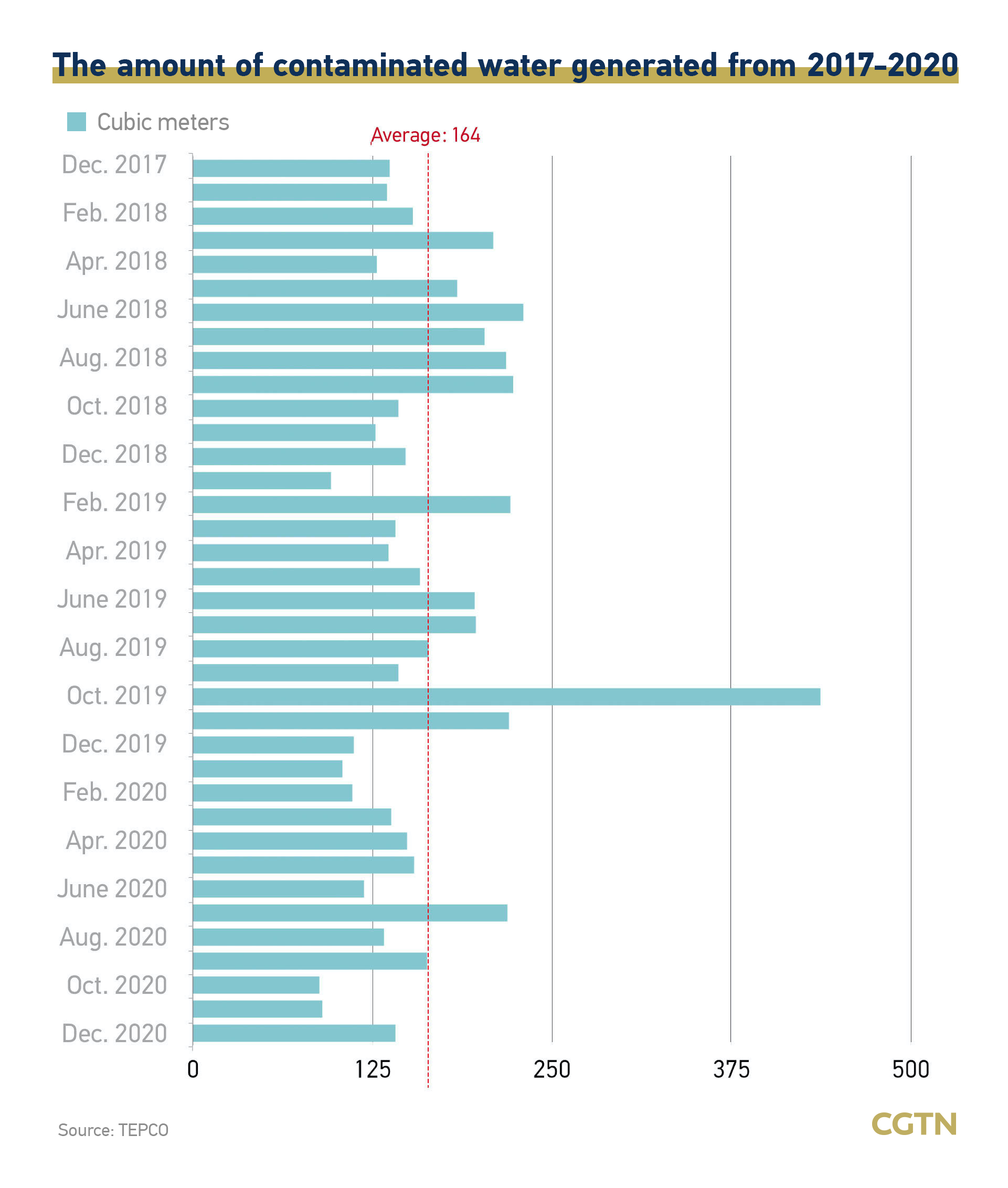 The Japanese government defended their plan by lamenting that the land within the plant facilities that is available for storage tanks will reach its capacity in the summer of 2022.

But previously, the country's Ministry of Economy, Trade and Industry's Subcommittee on Handling of the ALPS Treated Water stated in its report that "if there is not enough space, Fukushima Daiichi Plant's property area can be expanded" and that "the soil dumping area could be used if the soil from the dumping area, which in the northern part of the facilities, is moved to an interim storage facility adjacent to the premises." 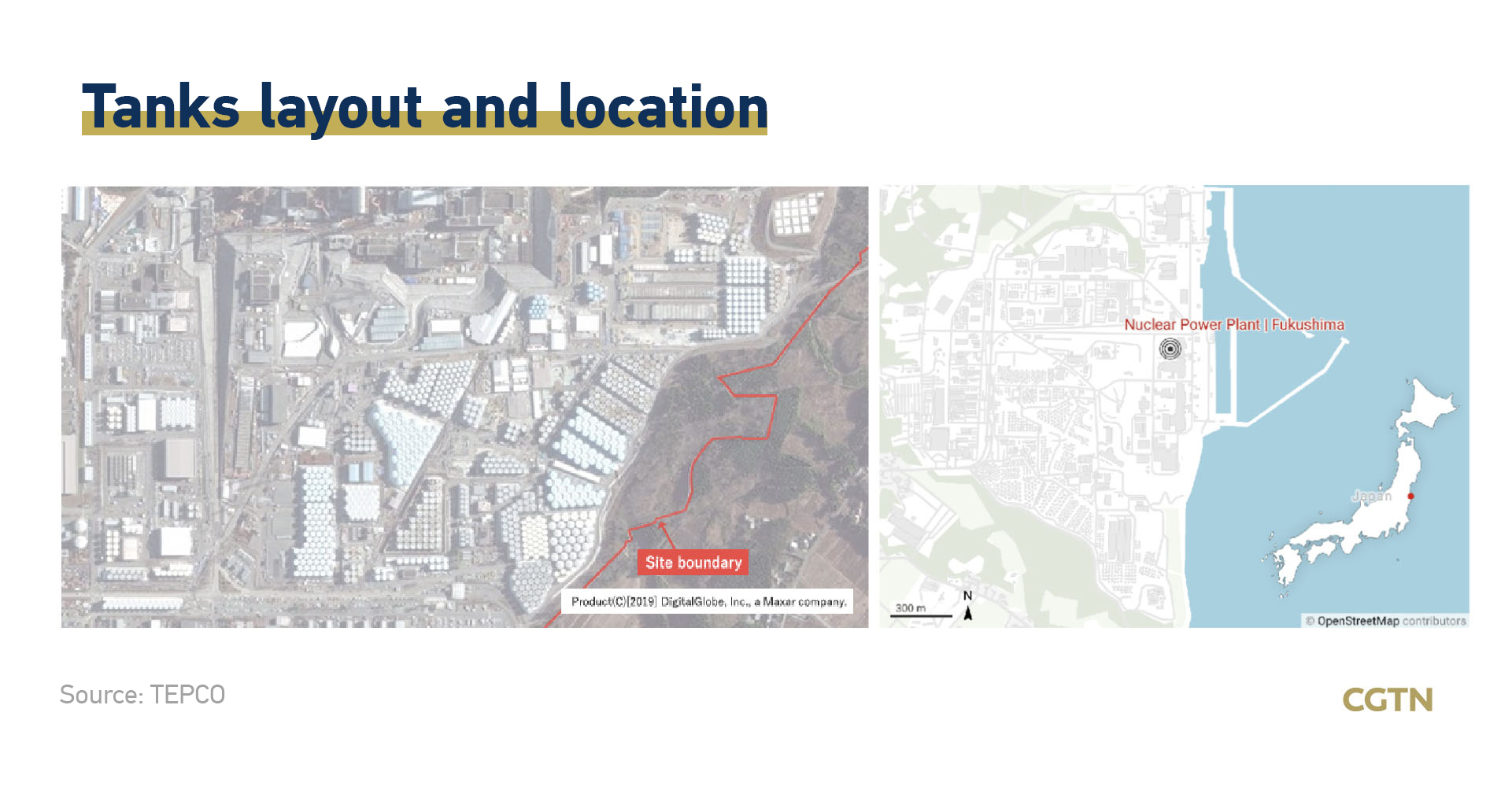 In fact, the Japanese government can store the wastewater in robust storage tanks on land instead of dumping it into the ocean. This storage option would require heavy investment and regular monitoring to ensure there is no leak.

"The Japanese government doesn't want to pursue this option because it's expensive," Shaun Burnie, senior nuclear specialist of Greenpeace East Asia, told CGTN in an online interview on Wednesday.

The plan could be less risky compared to dumping the wastewater into the ocean.

"We're particularly concerned about the migration or the movement of that radioactivity into the seas bordering Japan's neighboring countries. The East Sea around the Korean Peninsula and also the East China Sea is at risk," said Burnie.

"The discharge of contaminated water is not a domestic decision but has an international significance. Therefore, the Japanese government's position is not acceptable, but it's not fully consulting with its neighboring countries."

"Delay any decision on the ocean-dumping of nuclear wastewater from the reactors at Fukushima Daiichi until after the COVID-19 crisis has passed, and proper international consultations can be held," the UN special representatives urged the Japanese government on June 9 last year.