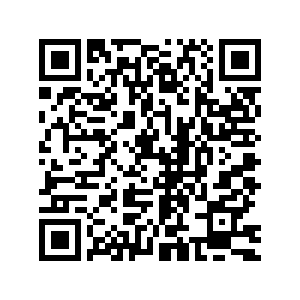 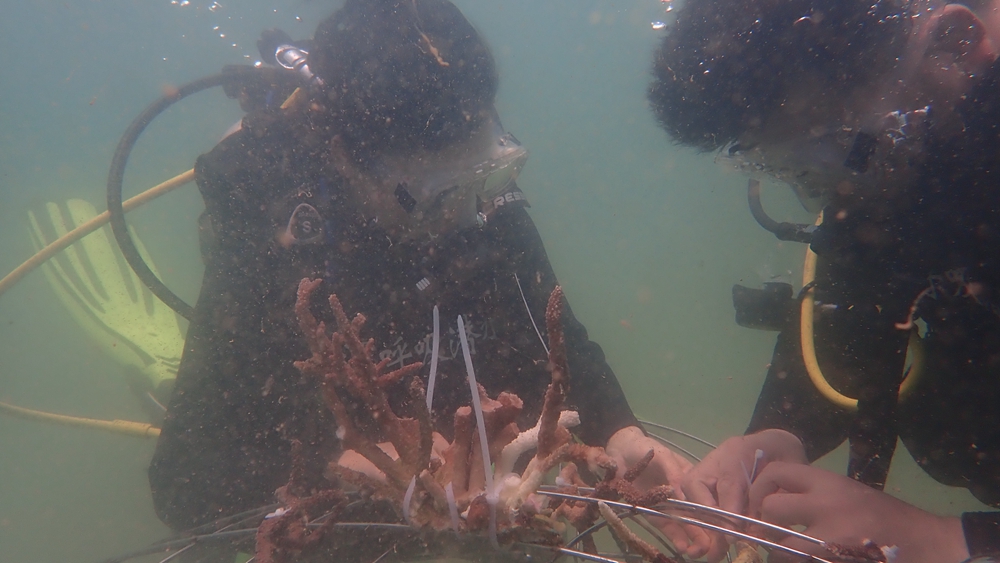 On the blue ocean surrounding Weizhou Island in south China's Guangxi Zhuang Autonomous Region, a group of divers resurface momentarily before plunging back into the depths.

But these divers aren't harvesting oysters or looking for exotic fish. Instead, they are attaching thumb-sized pieces of baby coral to frames on the bottom of the ocean.

Over the coming few days, this group of volunteers will carefully build back up this section of coral reef using seedlings grown in a lab at the Guangxi University Coral Reef Research Center in Nanning City.

This planting activity is part of the "That Sea, My Home" event, which kicked off this week in Weizhou to coincide with Earth Day on April 22.

Led by Guangxi University's Coral Reef Research Center, it's the latest of many projects in the region over the last five years to help repair and protect coral and other sea life in the South China Sea.

These projects have all been led by the director of the research center, Huang Wen. Huang is the brain behind coral planting in the region, diving at least seven times a month as well as researching, training volunteers and organizing conservation projects.

This week's project brought in sponsorship from several enterprises, NGOs, and for the first time, jewelry brand Chow Tai Fook, which designed the metal structures.

Yuan Yi, the project manager for the Green Development Council and Chow Tai Fook Marine Protection Project, explained, "We designed an artificial coral reef in the shape of a whale, which will be placed on the seabed and planted with antler corals." 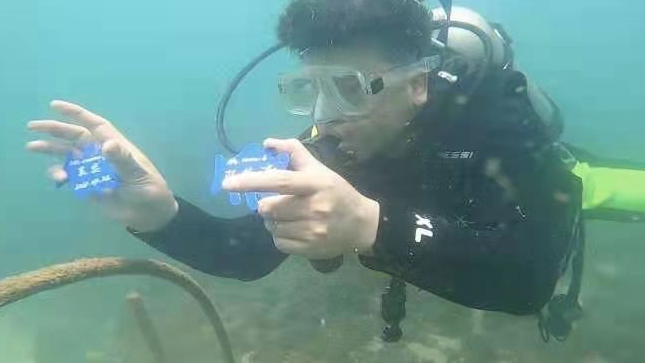 Name cards to be attached to corals. /Yuan Yi

Name cards to be attached to corals. /Yuan Yi

Coral reef covers 1-2 percent of ocean space but provides shelter for up to a quarter of ocean life, so conservation of these areas is crucial for the thousands of species that live there. This rich ecosystem has, in turn, become a source of income for coastal communities.

A recent study by Guangxi University found that after the formation of coral reefs, the amount of fish caught in the area increased by at least five times.

Yuan said that not only are coral reefs vital for the underwater ecosystem, but they also act as a protective barrier for natural disasters such as storms and tsunamis.

"About 70-90 percent of the impact force of a wave is absorbed or weakened when it encounters a coral reef," Yuan explained. He said that as coral grows, it also absorbs carbon dioxide, thus reducing the greenhouse effect.

But in recent years, accelerated climate change and human activity have whitewashed the world's coral, leaving it sparse and uninhabitable for marine life.

"With the excessive depletion of coral reefs and other marine resources, the ocean is being constantly acidified, leading to the bleaching and death of all kinds of corals, and the extinction of marine life," Yuan said. 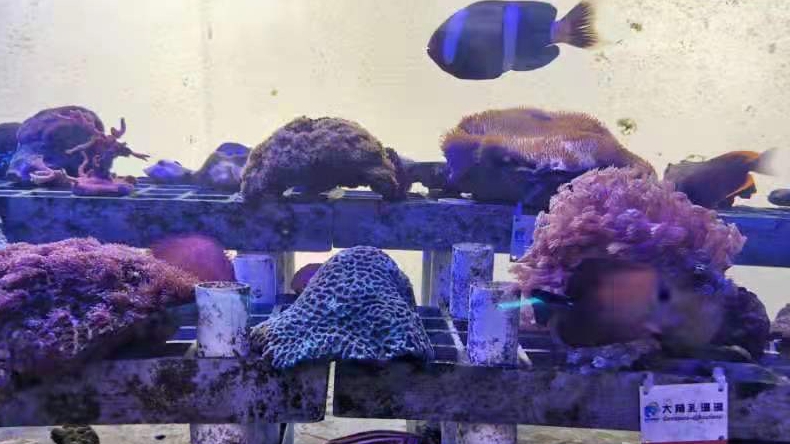 Coral grows in the lab, ready to be planted later. /Yuan Yi

Coral grows in the lab, ready to be planted later. /Yuan Yi

"As a result, the ocean on which we rely for survival is gradually moving towards desertification." Research began after a study undertaken by Guangxi University in 2015 found that living coral cover on the Weizhou Island reef had decreased from 42 percent in 1984 to just 10 percent.

The Guangxi University Coral Reef Research Center created a coral restoration area in the same year. The team began work to repair and protect what was left, while taking samples to see what could be grown in a lab and replanted later.

"It's my hope that Weizhou Island could one day become a refuge for global coral," Huang said.

The research center has so far managed to grow more than 10 species of coral, with thousands of different strains. Once the coral has grown to be a few months old, it can be transported to the island.

The research team has already built more than 100 artificial reefs and planted over 10,000 individual corals, with huge success, according to Yuan.

"Despite the twists and turns, the survival rate is still more than 80 percent. Many once-fractured corals have grown from 10 centimeters to 30 centimeters, and the restoration has achieved remarkable results." 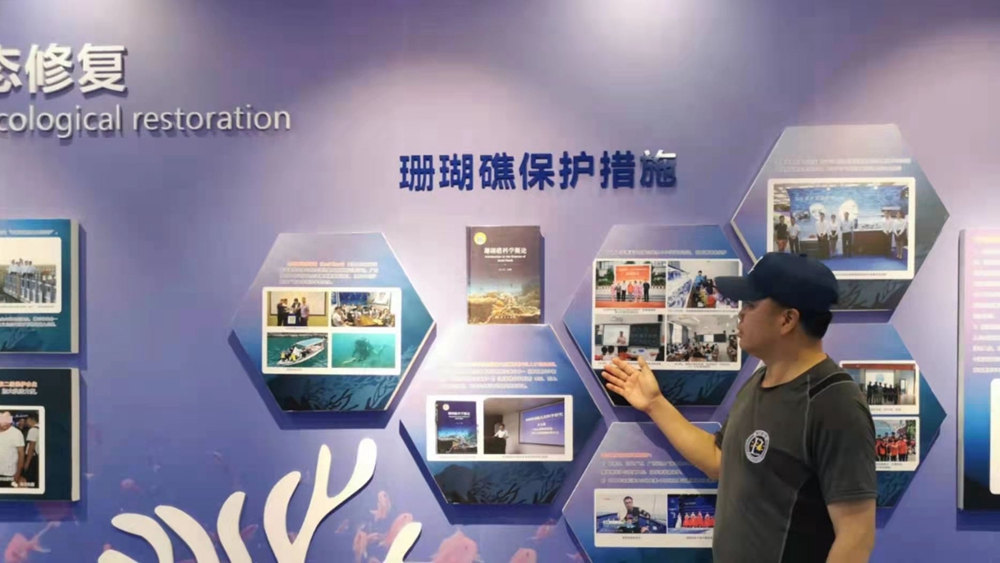 As this week's activity draws to a close, the research center will continue to train volunteers in coral planting, while actively engaging with tourists and local communities to promote coral conservation.

As part of the "That Sea, My Home" project, the Coral Museum – the first coral themed science base in the country – was officially opened on Weizhou Island.

Yuan said this is a crucial tool in educating people from near and far. "In 2019, over 1.6 million tourists passed through Weizhou. The museum is free and open to the public, which makes a big difference in spreading knowledge about the sea."

Yuan believes that as awareness grows, so does interest. "In early April, our partner, the Coral Reef Research Center, made a live broadcast of underwater coral planting with Xinhua, which was watched by more than 400,000 people online. More and more people are paying attention to and participating in marine protection in China," said Yuan.

While the continued work and growing interest are good news for marine life and those living on Weizhou Island, Yuan said seeing the coral returning to life is what excites him the most.