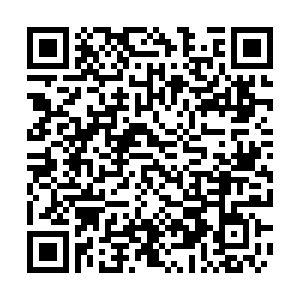 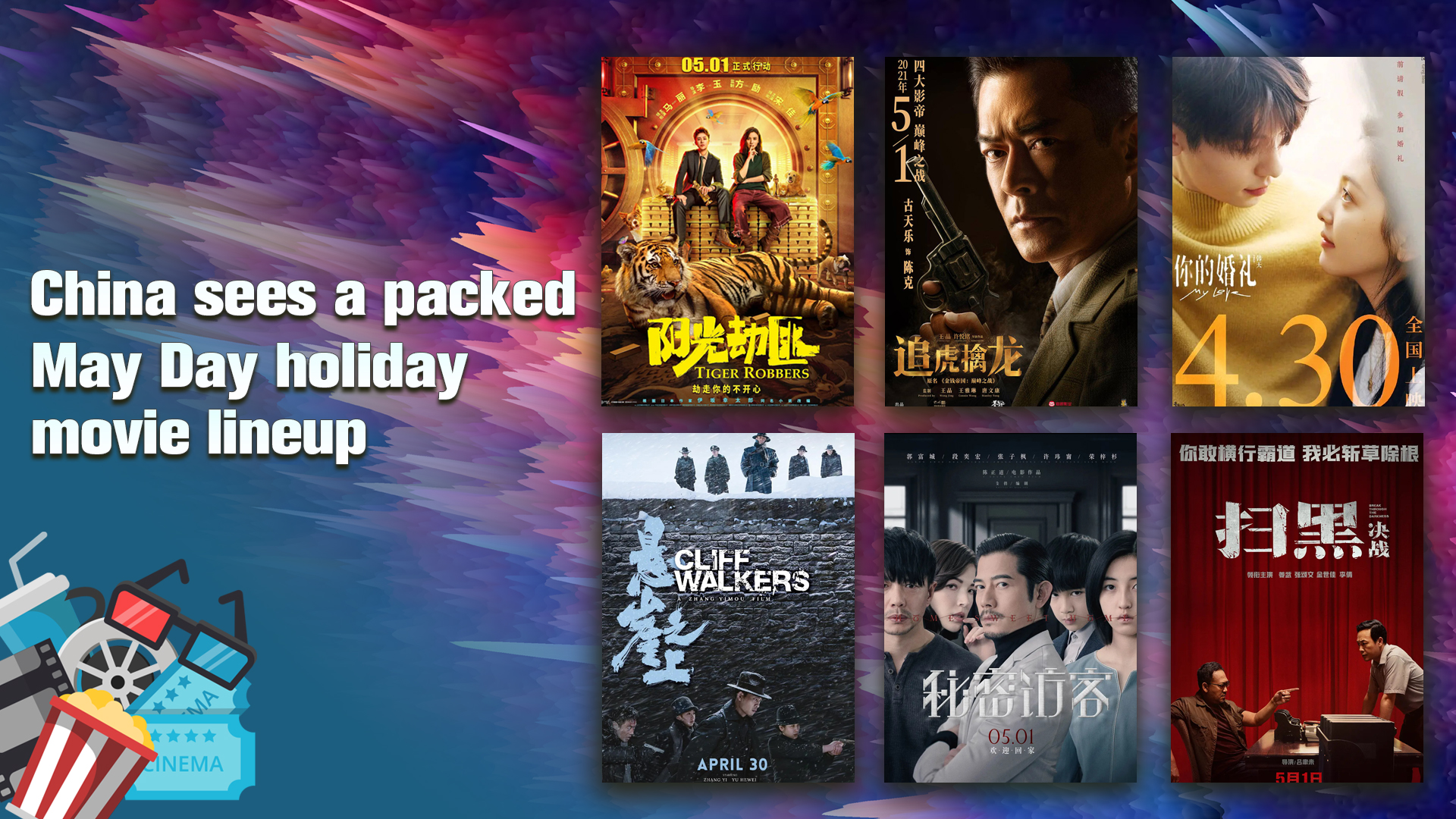 China is to welcome one of the most crowded holiday movie lineups for the upcoming five-day May Day holiday as a dozen new movies are slated to hit the big screens across the country.

The advance box office for the holiday has surpassed 200 million yuan ($30 million) as of Friday, a day before the holiday starts, according to Chinese ticketing platform Maoyan.

The previous May Day holidays from 2015 to 2019 witnessed a steady growth in terms of the box office revenue, though the whole industry was brought to a halt in 2020 due to the COVID-19 epidemic.

The total box office during 2019's May Day holiday saw a record-breaking 1.5 billion yuan, making the holiday one of the busiest and most lucrative time for movie-screening in China after the Spring Festival holiday and National Day holiday. 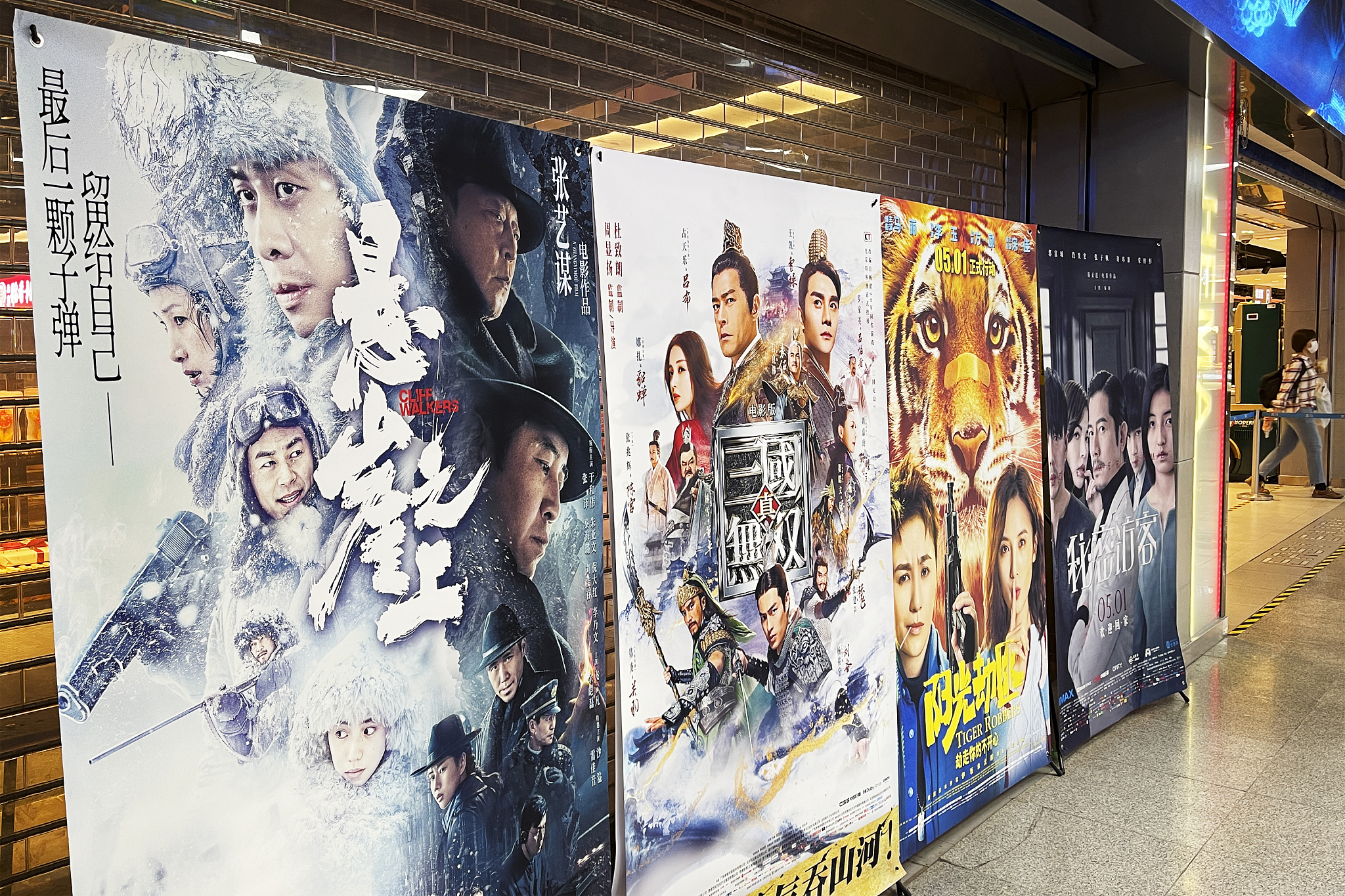 Posters of movies slated for the May Day holiday are lined outside a cinema in Beijing, April 21, 2021. /CFP

Posters of movies slated for the May Day holiday are lined outside a cinema in Beijing, April 21, 2021. /CFP

Among 12 movies scheduled for release, which is the largest number in history, 11 of them are homegrown ones. Domestic movies of various genres, including romance, comedy, fantasy, crime and animation, have dominated this holiday's lineup.

The previous box office champions during the May Day holidays used to be Hollywood blockbuster films such as "Fast and Furious 7" in 2015, "Fast and Furious 8" in 2017, and Marvel's "Avengers: Endgame" in 2019, which contributed to 80 percent of the total revenue. But the pandemic has since taken a big toll on the U.S. film industry.

Romantic comedy "My Love" tops Maoyan's presales chart with over 100 million yuan as of Friday afternoon, accounting for approximately half of the total. Starring actor Greg Hsu and actress Zhang Ruohan, it tells a love story between a couple that lasts for 15 years since high school. It's adapted from 2018 South Korean movie "On Your Wedding Day."

Award-winning filmmaker Zhang Yimou's spy thriller "Cliff Walkers" comes in at second place. Featuring veteran actors Zhang Yi, Yu Hewei, Qin Hailu and Zhu Yawen, it is based on the original story written by Chinese screenwriter Quan Yongxian. Set in the 1930s, it follows four Chinese special agents on a secret mission in the Japanese-backed puppet emperor of "Manchukuo" during their invasion in China.

Both movies were released on Friday. Meanwhile, "Cliff Walkers" is also set to hit North American cinemas on the same day.

They are followed by suspense thriller "Home Sweet Home," directed by Hong Kong director Leste Chen and starring Aaron Kwok and Zhang Zifeng. Zhang recently gained much popularity and acclaim for her role in the hit drama film "Sister" during the Qingming Festival holiday in April. The movie "Home Sweet Home" portrays the changing lives of a family of four after the intrusion of a mysterious visitor.

It's estimated that the total box office during the holiday is likely to reach 1.8 billion yuan, higher than that of 2019, according to a report jointly released by Chinese tech-giant Baidu and box office tracker Lighthouse.