Download
Graphics: How has Biden performed in his first 100 days?
By Zhao Hong, Hu Xuechen 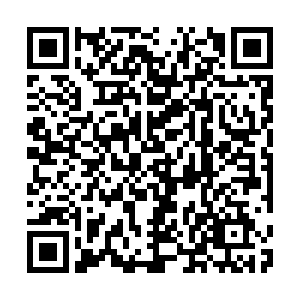 Thursday marks Day 100 of U.S. President Joe Biden's presidency. The 100-day mark offers a window into the priorities of the president's agenda.

The circumstances have been particularly high-stakes for Biden given the unprecedented problems posed by COVID-19.

Much of his first 100 days has focused on ramping up vaccination efforts with a goal of 200 millions shots in his 100 days and trying to stimulate the economy through a $1.9-trillion COVID-19 aid package.

Biden's approval rating stood at 53.8 percent on his 100th day, per the FiveThirtyEight calculations, higher than his predecessor Donald Trump's 42 percent rating, but lower than Barack Obama's 60.8 percent. 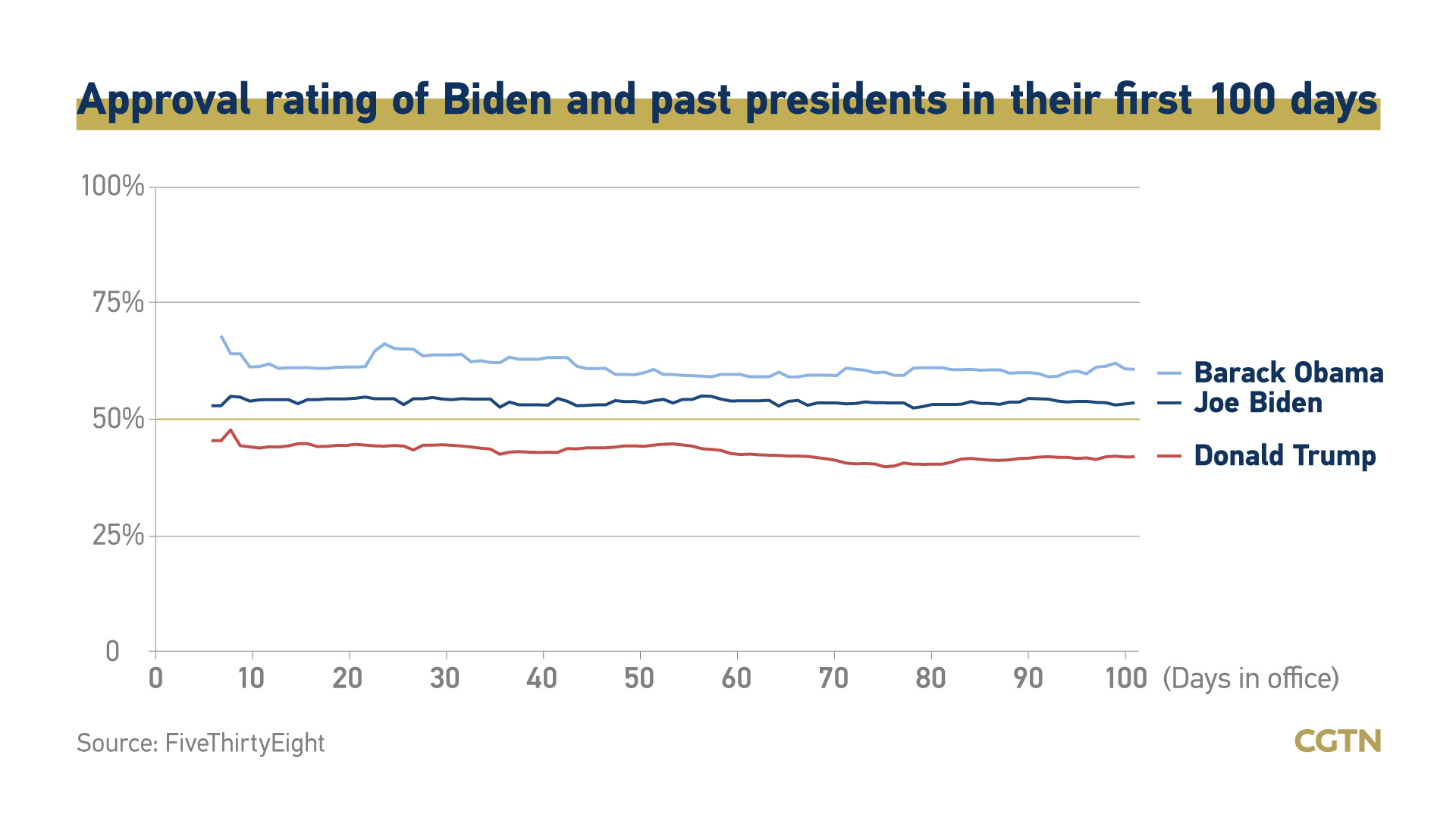 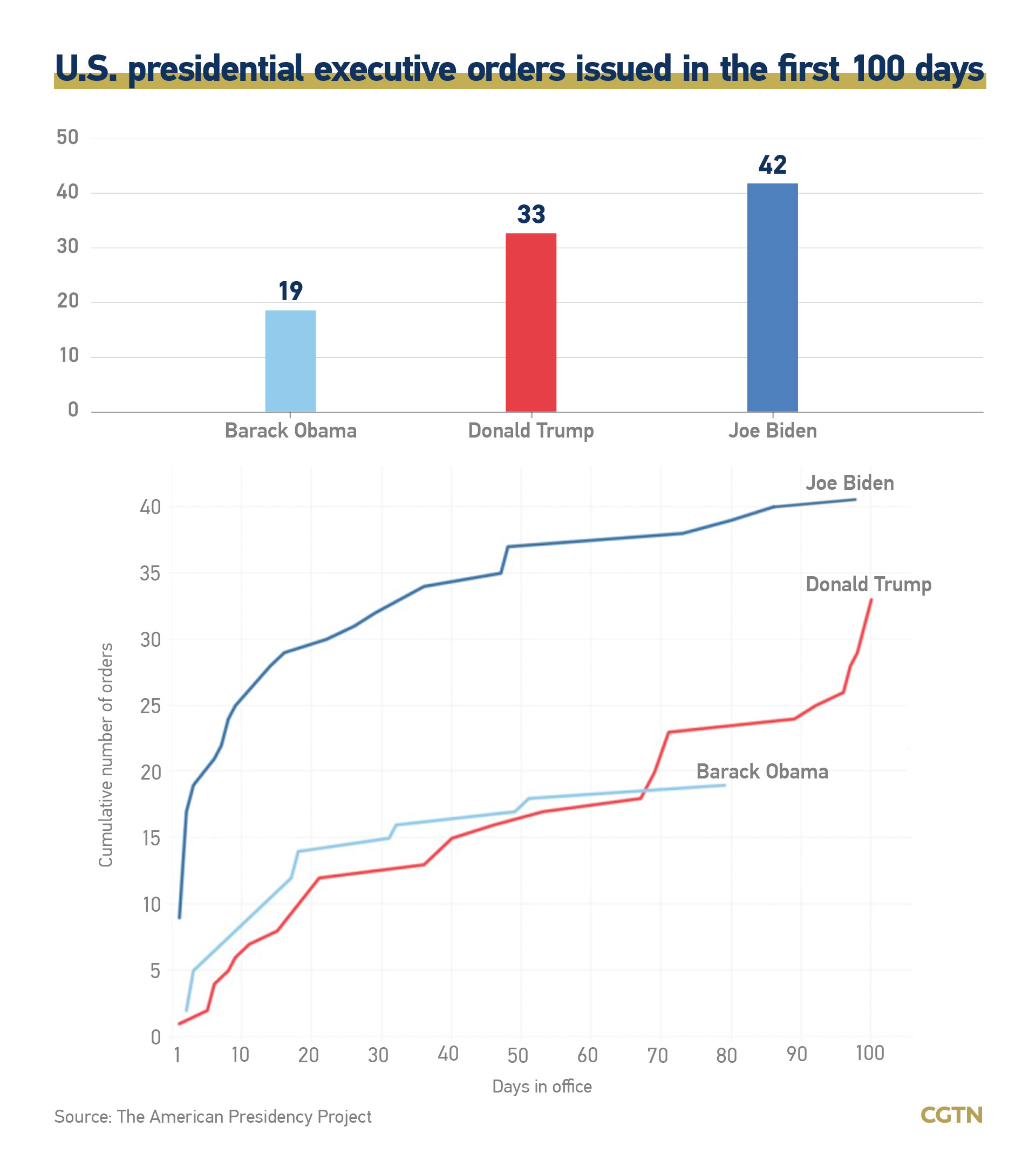 Biden signed nine executive orders on his inauguration day, five of which were reversing Trump's policies, including canceling the Keystone XL pipeline, and undoing Trump's expansion of immigration enforcement within the U.S.

Most of Biden's executive orders were aimed at combating the novel coronavirus, followed by key issues including racial equity and immigration. 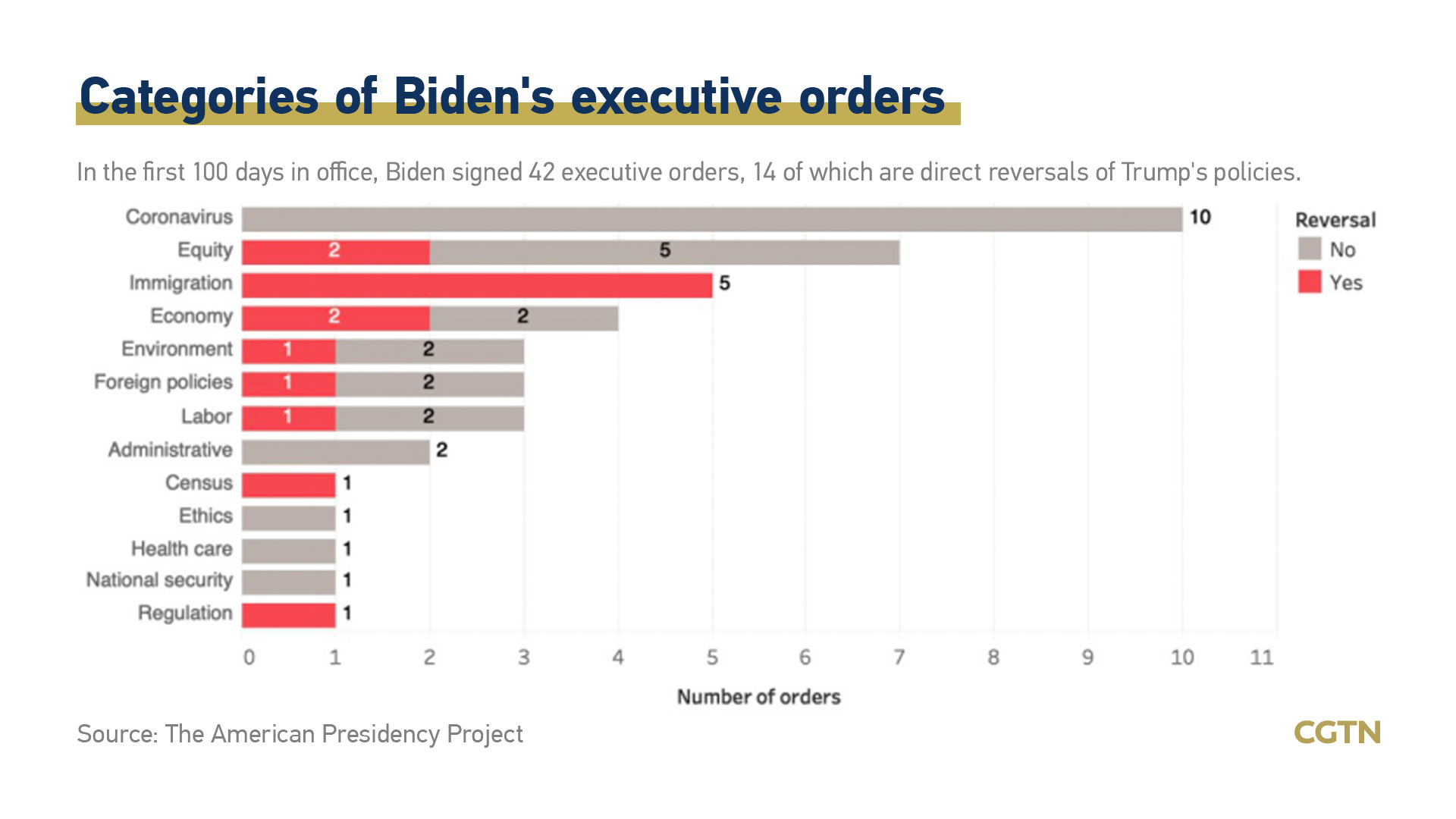 Looking back into Biden's campaign promises, the then presidential candidate had made 99 pledges to the country, and has so far worked on 37 of them. Among those, 10 are achieved, two installed, one compromised and 24 in progress. 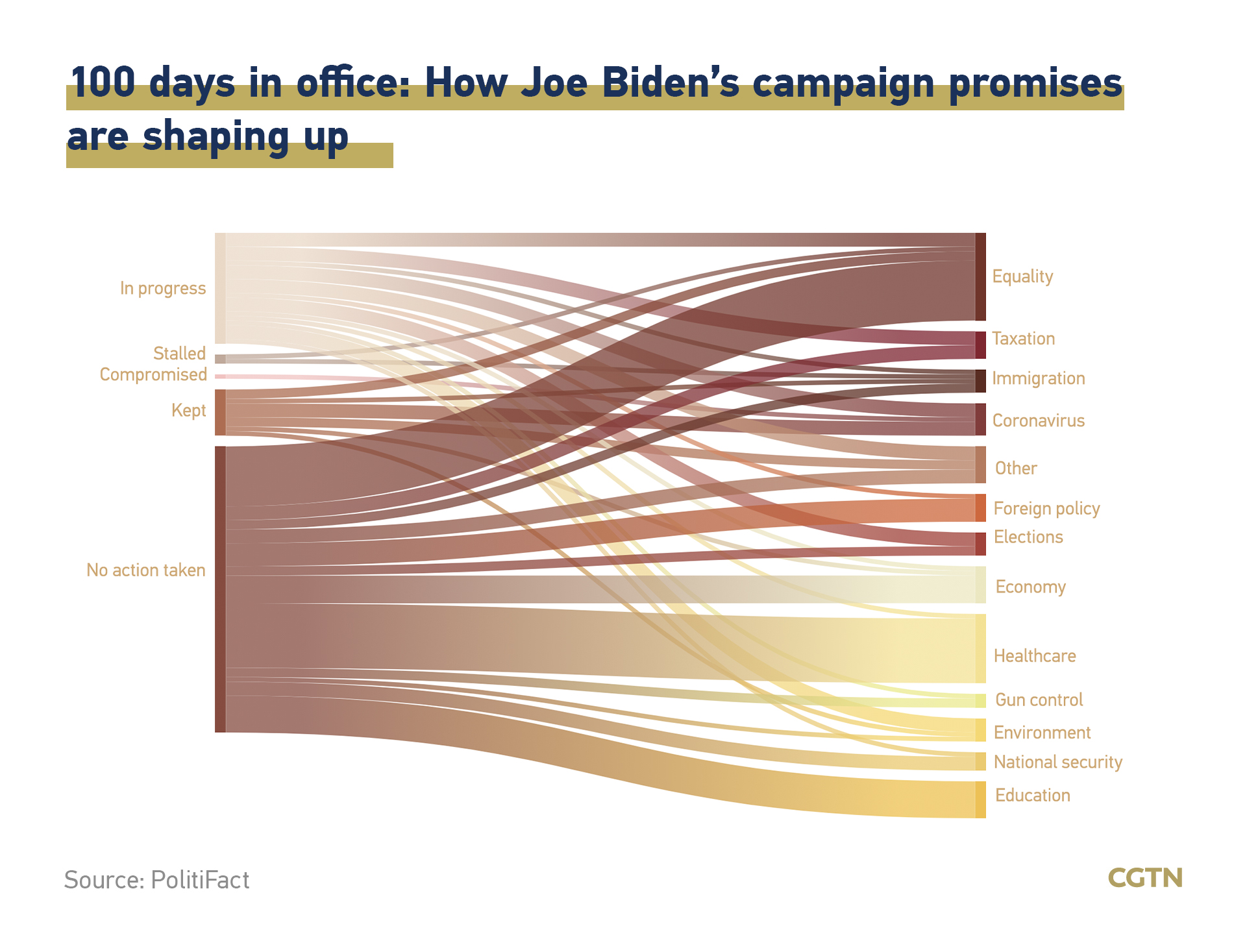 Seven of Biden's campaign pledges are related to coronavirus. In the first 100 days, he has taken actions on all of them. Barring the "nationwide mask mandate" promise that was compromised, all of the rest are either achieved or in progress.

Biden issued orders requiring masks in federal buildings and on airplanes and trains, after he took office in January. Biden later announced his administration would distribute 25 million masks to community health centers and food banks nationwide.

Although the pledge is compromised since only 28 states have statewide order that requires a face covering in public spaces, most of the states without mandates strongly encourages residents to do so. 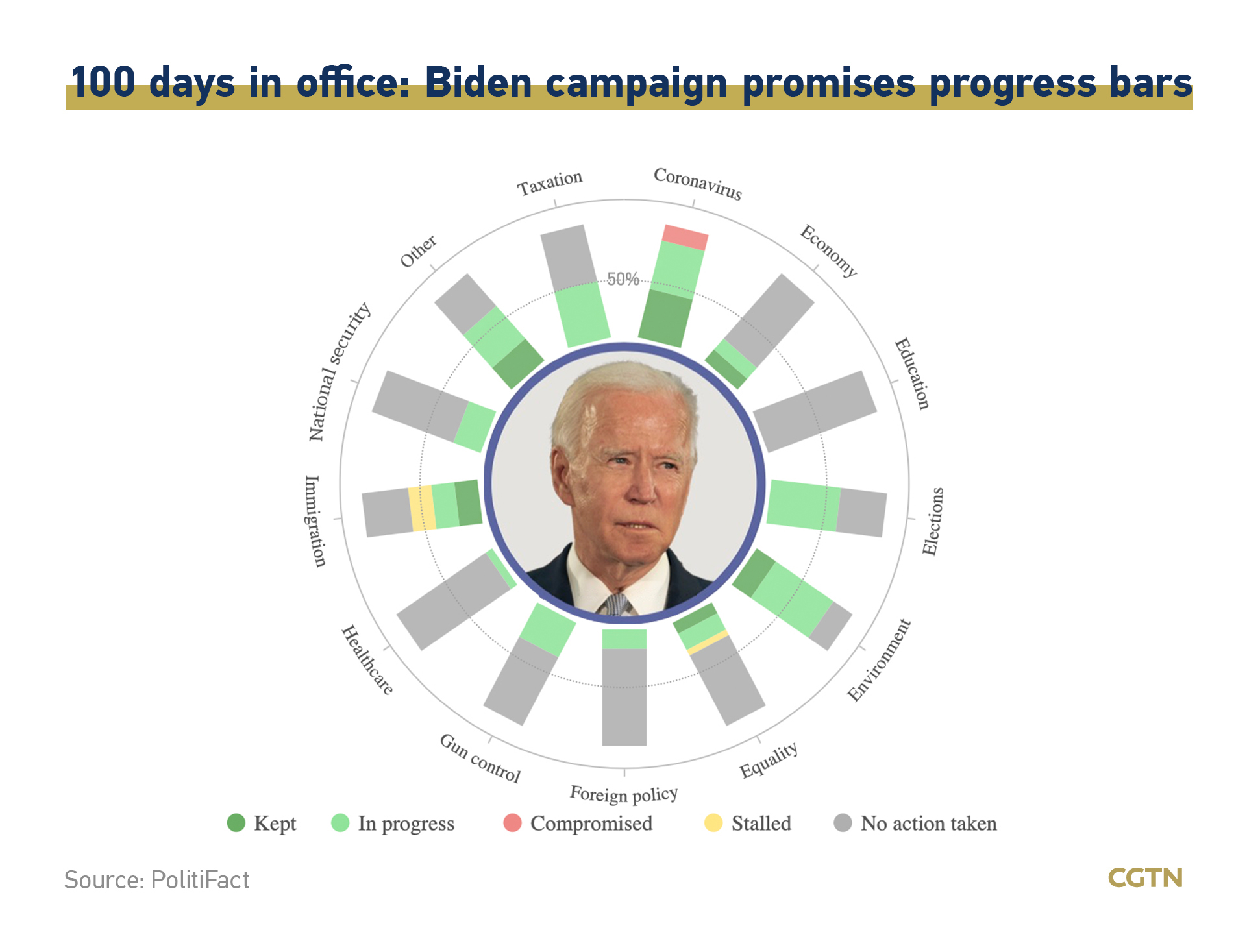 Besides pandemic, Biden also faced multiple challenges he inherited, such as the surging discrimination against immigrants. The new administration reversed the "family separation" policies through a memo to all federal prosecutors on January 26, 2021.

Under the "zero-tolerance" policy issued by then-Attorney General Jeff Sessions in April 2018, the Department of Justice had prosecuted all suspected illegal border-crossers for illegal entry. Through the prosecution, children were taken away from their parents and placed under the custody of the U.S. Health and Human Services Department. As a result, more than 3,000 children were forced to separate from their families. By the end of April, Biden has worked on more than half of the pledges related to the issue.

Other promises that have been progressed more than 50 percent are elections and the environment. In these two areas, Biden supports bill to restore voting rights to felons and brings the U.S back into the Paris Climate Agreement.

Minority inequality is another challenge Biden took over from his predecessor, especially those experienced by racial and religious minorities. Nineteen of the campaign promises focus on equality, although 13 are left untouched till now. On his first day at the Oval Office, Biden revoked the discriminatory travel ban applied mostly to Muslim-majority countries through a proclamation. He also called for a review of screening procedures for people seeking entry into the United States in the document.