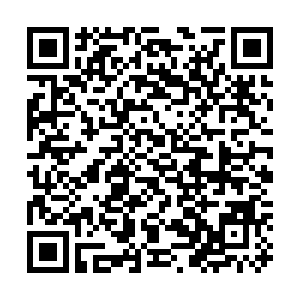 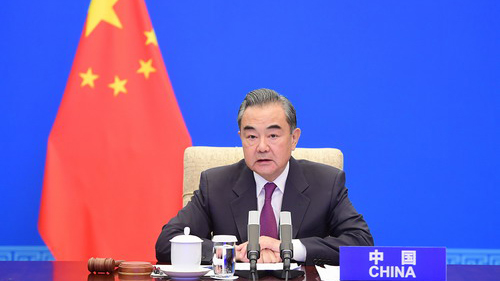 Under the initiative of China, which holds the rotating presidency this month, the Security Council held the meeting on the "Maintenance of International Peace and Security: Upholding Multilateralism and the UN-centered International System" via video link.

Noting that this year marks the 50th anniversary of the restoration of the People's Republic of China's lawful seat at the UN, Wang said that China will continue to take concrete actions to support the work of multilateral mechanisms with the United Nations at its core.

All parties should pursue win-win cooperation, not a zero-sum game, said Wang in putting forward propositions for all parties to practice true multilateralism.

"All countries should conduct dialogue and cooperation on the basis of equality and mutual respect. No country should expect others to lose, but should strive to win together with other countries to achieve universal security and common prosperity," he said.

International rules are not the patents and privileges of a few countries and should be adhered to by all countries, without exceptionalism and double standards, he said. 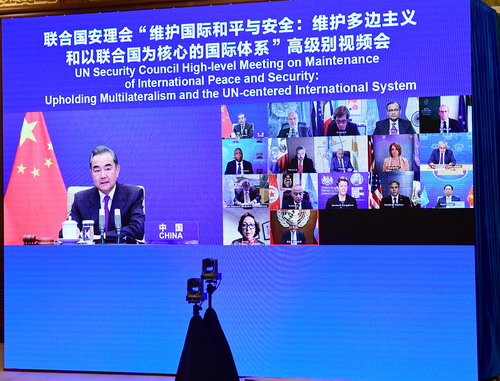 Multilateralism must focus on problems and solve problems, otherwise it will not stand and go far, Wang said, adding that all countries should incorporate their national interests into global interests.

He said all countries should consider both the present and the long-term interests, and must not undermine the sustained peace of the world and the sustainable development of the world at the cost of short-term need.

"In particular, major countries must set an example and take the lead in providing global public goods," Wang said.

Each country has its own unique history and culture, and needs to take a development path that suits its own national conditions, the Chinese foreign minister said, adding that dividing the world by ideology runs counter to the spirit of multilateralism and represents a retrogression of history.

"All countries are happy to see the United States change its practices of the past few years, truly practice multilateralism and make its contributions to this end," Wang said.

"We'll also work with any country on these issues, including those with whom we have serious differences. The stakes are too high to let differences stand in the way of our cooperation," U.S. Secretary of State Antony Blinken told the meeting.

Russia's Foreign Minister Sergei Lavrov said the politics of some Western countries impeded the UN-centered international system, adding that all sides should abide by the purposes and principles of the UN Charter, instead of creating conflicts and confrontations.

Later this month, China will chair two high-level open debates on "Peace and Security in Africa" and on "UN peacekeeping operations."

(Xinhua and CGTN's Zheng Yibing contributed to this story)