Download
Analysis: A new round of Israel-Palestine conflict, what's behind?
By Shi Yu 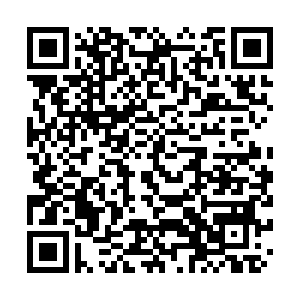 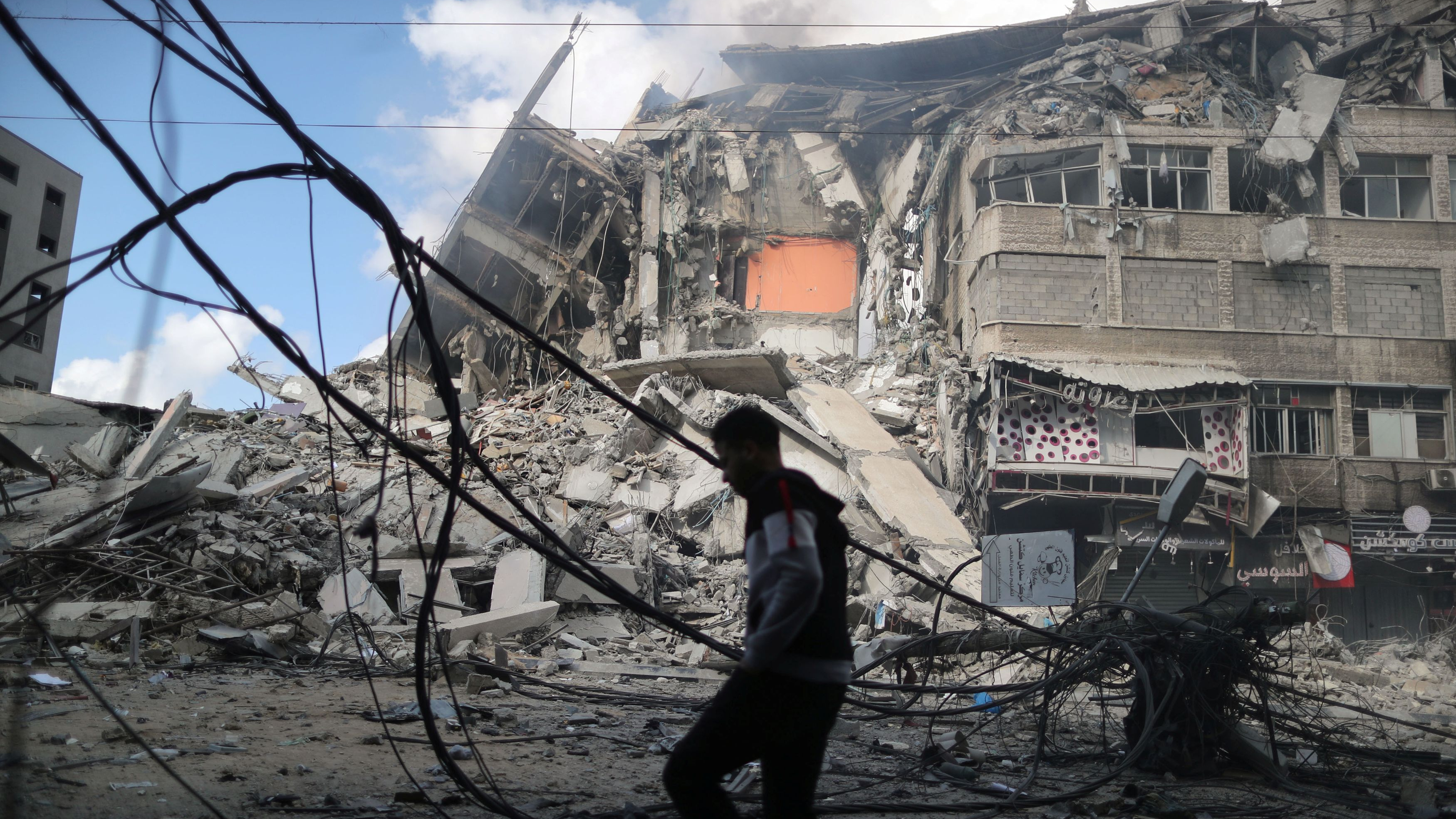 A Palestinian man walks past the remains of a tower building which was destroyed in Israeli air strikes, amid a flare-up of Israeli-Palestinian violence, Gaza City, May 13, 2021. /Reuters

A Palestinian man walks past the remains of a tower building which was destroyed in Israeli air strikes, amid a flare-up of Israeli-Palestinian violence, Gaza City, May 13, 2021. /Reuters

Clashes between Israel and the Palestinian militant group Hamas entered their fifth day. Since Monday, artillery crossfire has resulted in over 600 hits by the Israeli army and 1,750 rockets fired by Hamas, causing more than 100 deaths, including 27 children, and more than 580 wounded.

As a complex and longstanding territorial and religious dispute dating back to the establishment of the state of Israel in 1948, conflicts between the two sides have erupted from time to time, but this year's heavy losses and long duration made it the most intense conflict since 2014. Reasons behind, according to experts, lie in both domestic and international factors.

Domestic politics: All for the votes

The military escalation was triggered by weekend unrest between Palestinian and Israeli police at Jerusalem's Al-Aqsa mosque compound, a sacred place to both Muslims and Jews.  But the deep roots for this are connected to long-term anger towards Israel's eviction policies against Palestinian families and its increasingly tough stance in the Gaza Strip.

Domestically, Israel is undergoing a political crisis after Israeli Prime Minister Benjamin Netanyahu failed to form a coalition government for the fourth time. The country has been in a two-year political deadlock, putting its longest-serving leader in a crisis as the opposition party seeks to unseat him.

On the other hand, election results in March, which allocated more seats to the Israeli far-right party Jewish Power, also makes the coalition with Jewish ultranationalists the only feasible option if he wants to form a majority government.

The rise of the far-right party, with an extreme view towards Arabic countries, is fueling the country's tough stance in Gaza, and the tendency is expected to become stronger if the coalition succeeds. According to analysts, it's possible the right-wing party will take the opportunity to incite nationalism on the issue to gain popularity among the public and complete the coalition. 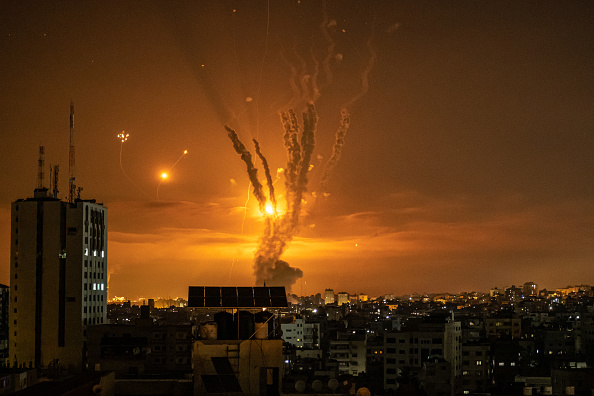 Rockets launched towards Israel from the northern Gaza Strip and response from the Israeli missile defense system known as the Iron Dome leave streaks through the sky, Gaza City, Gaza, May 14, 2021. /Getty

Rockets launched towards Israel from the northern Gaza Strip and response from the Israeli missile defense system known as the Iron Dome leave streaks through the sky, Gaza City, Gaza, May 14, 2021. /Getty

A similar situation has also been seen in Palestine, where the 85-year-old Palestinian President Mahmoud Abbas delayed the May 22 parliamentary elections and July 31 presidential elections amid disputes over voting in Israeli-annexed East Jerusalem and divisions in his Fatah party.

The postponement was announced when the peace-minded Fatah was suffering from decreasing approval ratings while its rival, the militant group Hamas, was gaining popularity in the Israeli-occupied West Bank for its hardline stance.

Although Abbas attributed the postponement to the uncertainty of the participation of people in East Jerusalem, many believe the real purpose of the decision is to buy more time for the party to avoid failure. Thus, it is possible that driven by the election, both sides, Hamas in particular, has to gesture its hard stance on this issue. 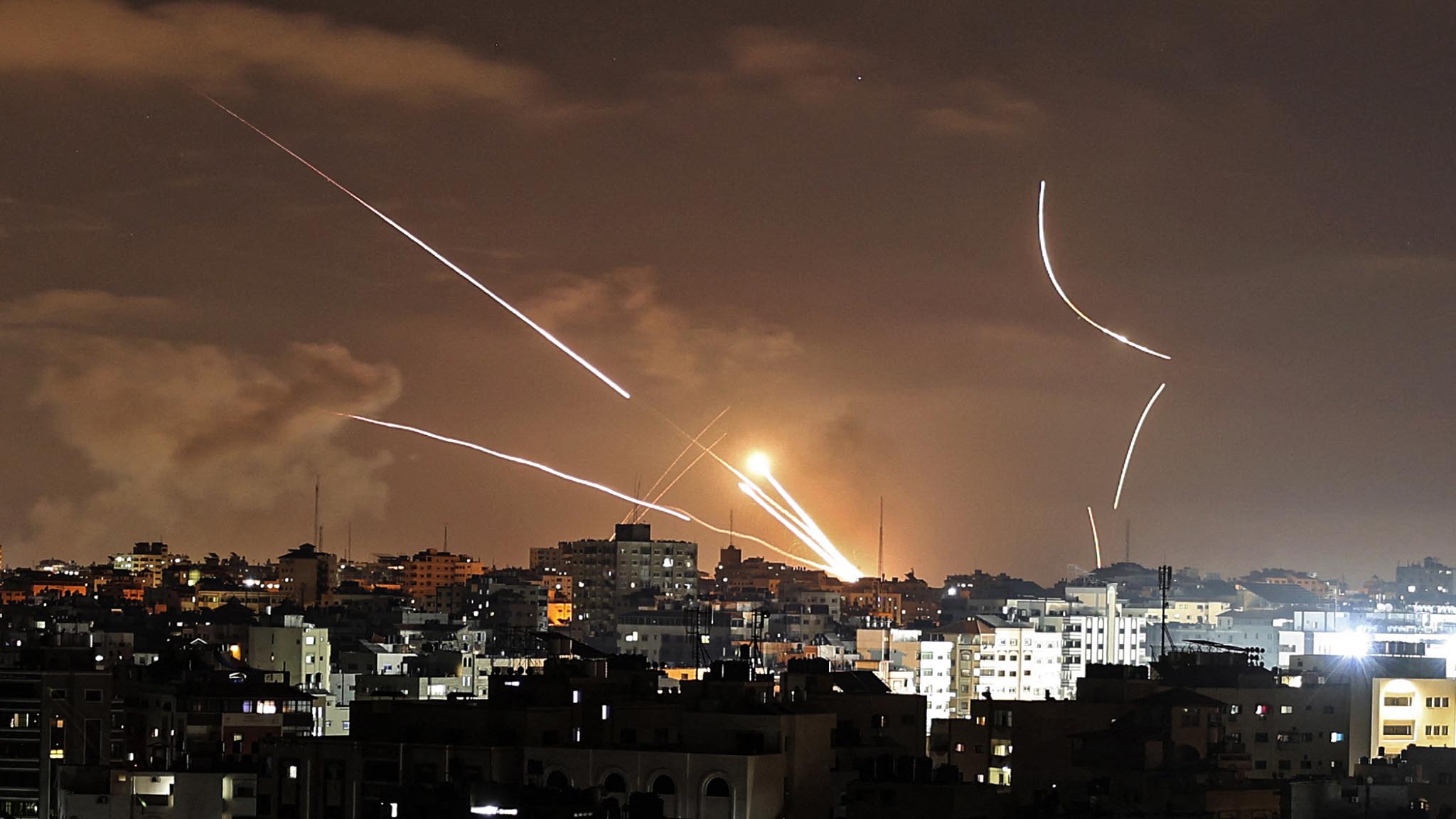 Internationally, the policy preference of the U.S. on the issue, to some degree, intensifies the conflict.

Tom Fowdy, a British writer and analyst of politics and international relations with a primary focus on East Asia, believes that the U.S.'s acquiescence outraged the Palestinians while emboldening the Israelis to continue its settlement policy in East Jerusalem.

Starting from the cancellation of financial aid for Palestinians to the U.S. recognition of Jerusalem as the capital of Israel, the U.S. support for Israel, under Donald Trump's administration, showed a clear pro-Israel tendency.

The general direction of the American policy remains unchanged under Joe Biden's administration despite resumed aid for peace-building measures between Israel and Palestine.

"The White House has a vision for Israel. This is the Biden administration's point of departure in thinking about the Palestinians and shaping their policy toward the conflict," Nader Hashemi, director of the Center for Middle East Studies at the University of Denver, was quoted by Al Jazeera as saying.

He viewed Biden's policy as "a mere continuation of the unconditional American support" provided under every U.S. administration since Israel's founding.
Khalil Jahshan, Executive Director of Arab Center Washington DC, also holds a similar opinion. To CGTN, he attributed the deadlock in the region to U.S. "bias" and its ineffective way of dealing leads to the failure of gaining trust from both bodies.