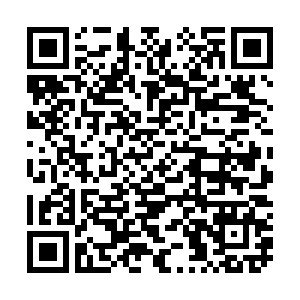 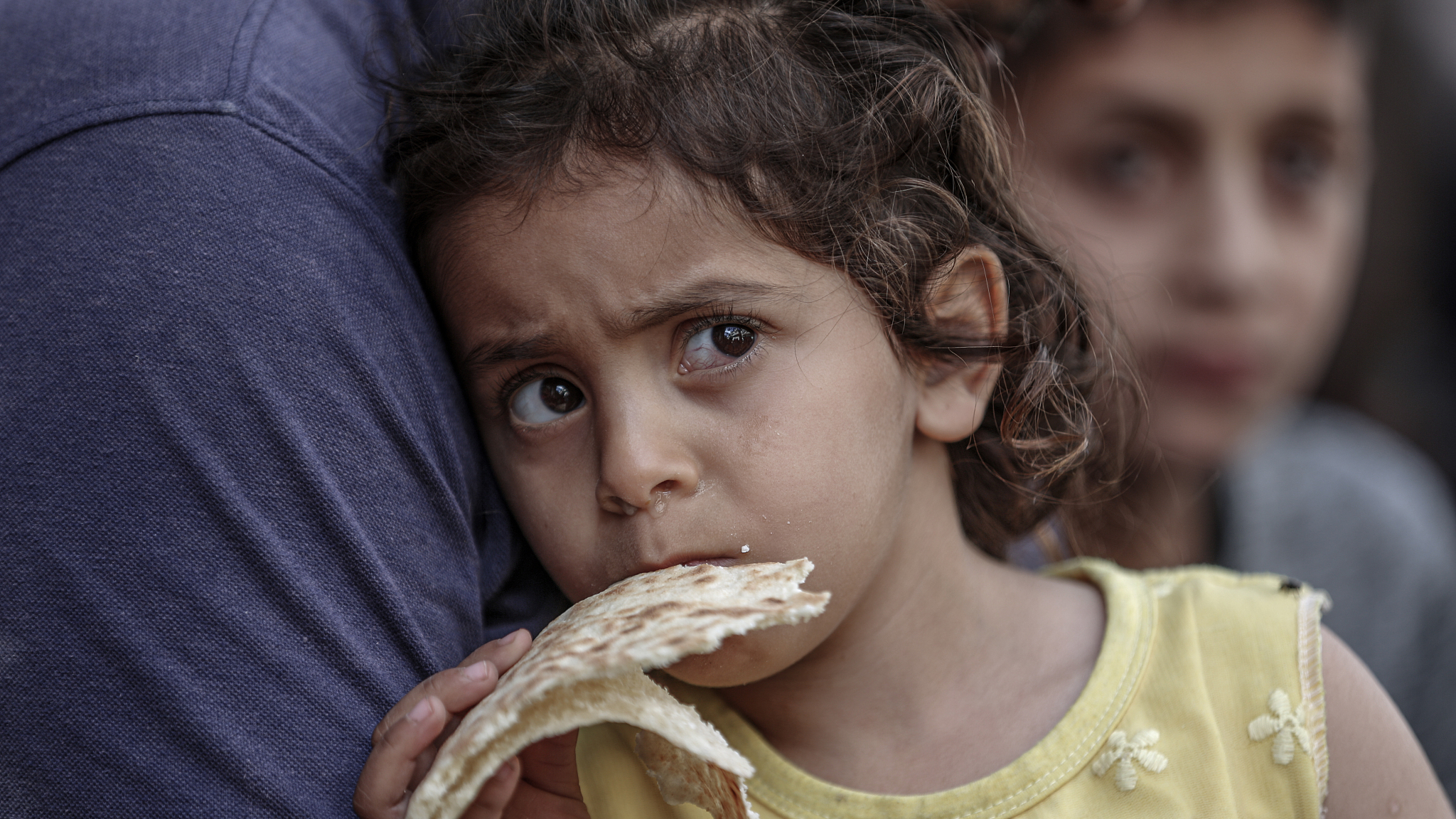 Food and water insecurity in Gaza is intensifying amid destruction, displacement and disruption to emergency humanitarian aid caused by Israeli bombardment in the impoverished enclave.

The World Food Programme (WFP) on Tuesday estimated that an additional 160,000 Palestinians are at risk of going hungry after being caught in the crossfire between the Israeli army and Hamas militants.

"People in Gaza have already been going through a food security crisis. With the current escalation, it's just adding to the needs on the ground," WFP Representative and Country Director in Palestine Samer AbdelJaber told UN News.

Two out of three in Gaza, home to 2 million people, were lacking adequate access to food before violence erupted last week, according to the WFP, which already provides regular support to around 260,000 in the Palestinian territory.

Living conditions in Gaza have been bleak since 2007, when Israel tightened movement restrictions and imposed a land, air and sea blockade after Hamas took control. Today, 53 percent of residents in the fenced-in area live in poverty, and unemployment stands at 45 percent. The fallout of COVID-19 has compounded the already dire situation, and now the fresh bout of fighting is piling on the agony.

Shelling and airstrikes by Israeli forces have forced Gazans out of their homes, but displacement is exposing those seeking safety to a different kind of insecurity.

"For people who have lost or fled their homes, one of the most pressing needs at the moment is food," AbdelJaber said in a statement.

Some 72,000 Palestinians have been internally displaced since last week, the latest data from the UN Office for the Coordination of Humanitarian Affairs (OCHA) shows. Among them, some 65 percent have sought refuge in schools run by the UN, with the rest staying with host families. 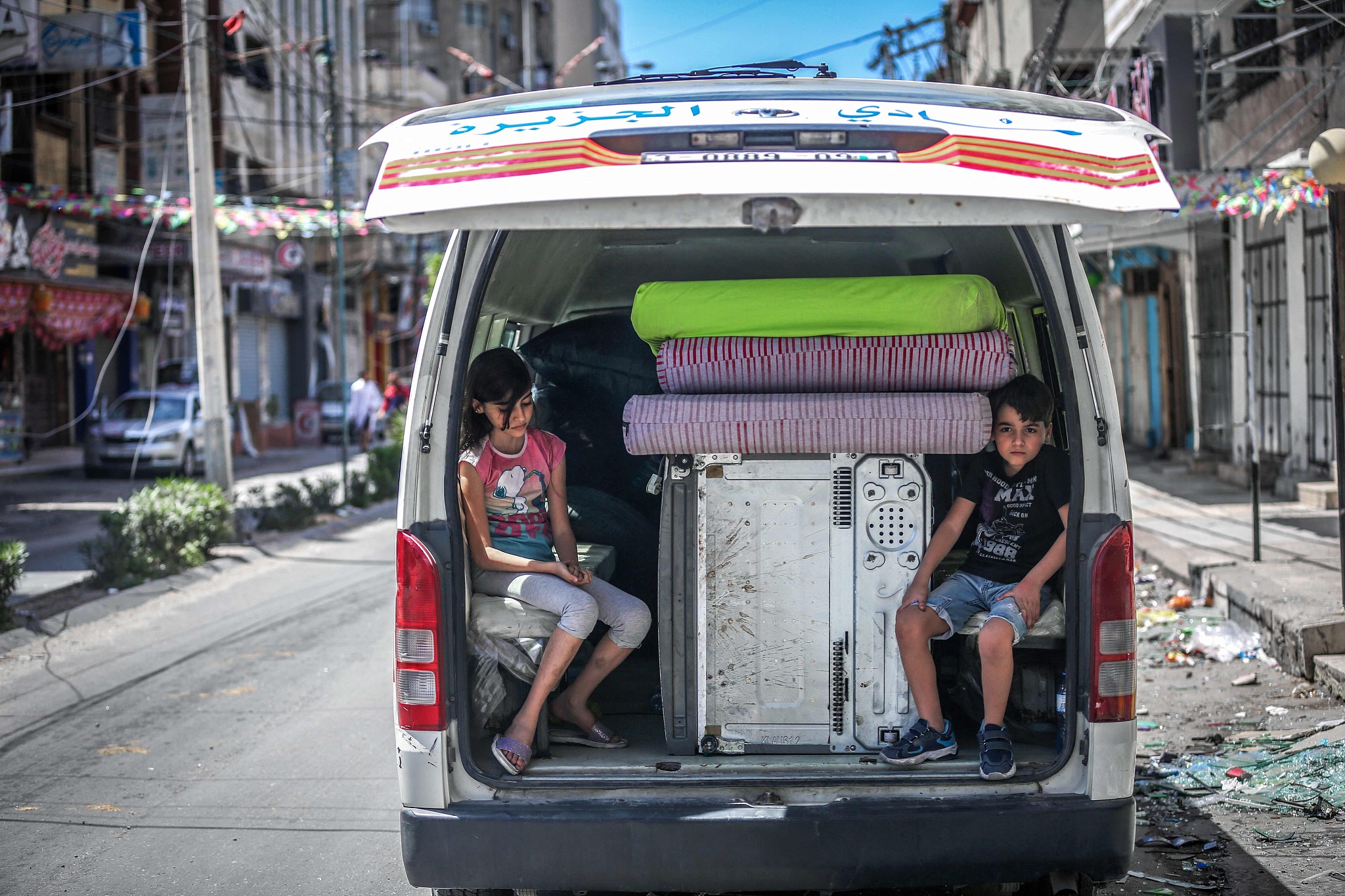 Palestinian children sit in the back of a van loaded with salvaged belongings from their home at the Al-Jawhara Tower which was heavily damaged by Israeli airstrikes in Gaza City, on May 17, 2021. /CFP

Palestinian children sit in the back of a van loaded with salvaged belongings from their home at the Al-Jawhara Tower which was heavily damaged by Israeli airstrikes in Gaza City, on May 17, 2021. /CFP

For many who escaped, money has been tight, and in temporary shelters, families are relying on charities for hot meals. The WFP on Monday said it is providing emergency assistance for over 51,000 people in northern Gaza, handing out vouchers that beneficiaries could redeem for food from selected shops.

The agency says stores remain in business, but the ongoing violence and the closure of border crossings have impacted food supplies and aid deliveries.

"Access to the market is a bit of a challenge," AbdelJaber warned in the interview with UN News.

"We've started seeing that vegetables and basically fresh produce are not reaching the markets and inflating the prices in the shops because the farmers are not able to get to their lands."

Some 200,000 hectares of agricultural plots either have been attacked or are out of reach because of the bombing, according to social justice organization Oxfam. In a statement on Tuesday, it said, "Transport and movement around Gaza [are] not only unsafe but now made highly difficult because of the bomb damage to roads and debris from destroyed buildings."

The blocked streets and barrage of missiles are making "any emergency aid, at the moment, impossible to mount," the NGO warned.

There was a brief glimmer of hope on Tuesday when Israel opened the Karem Abu Salem (Kerem Shalom) crossing for critical humanitarian cargo to enter Gaza. A total of 24 trucks were scheduled to cross into the besieged territory, carrying shipments of fuel, medicine, animal feed and food. 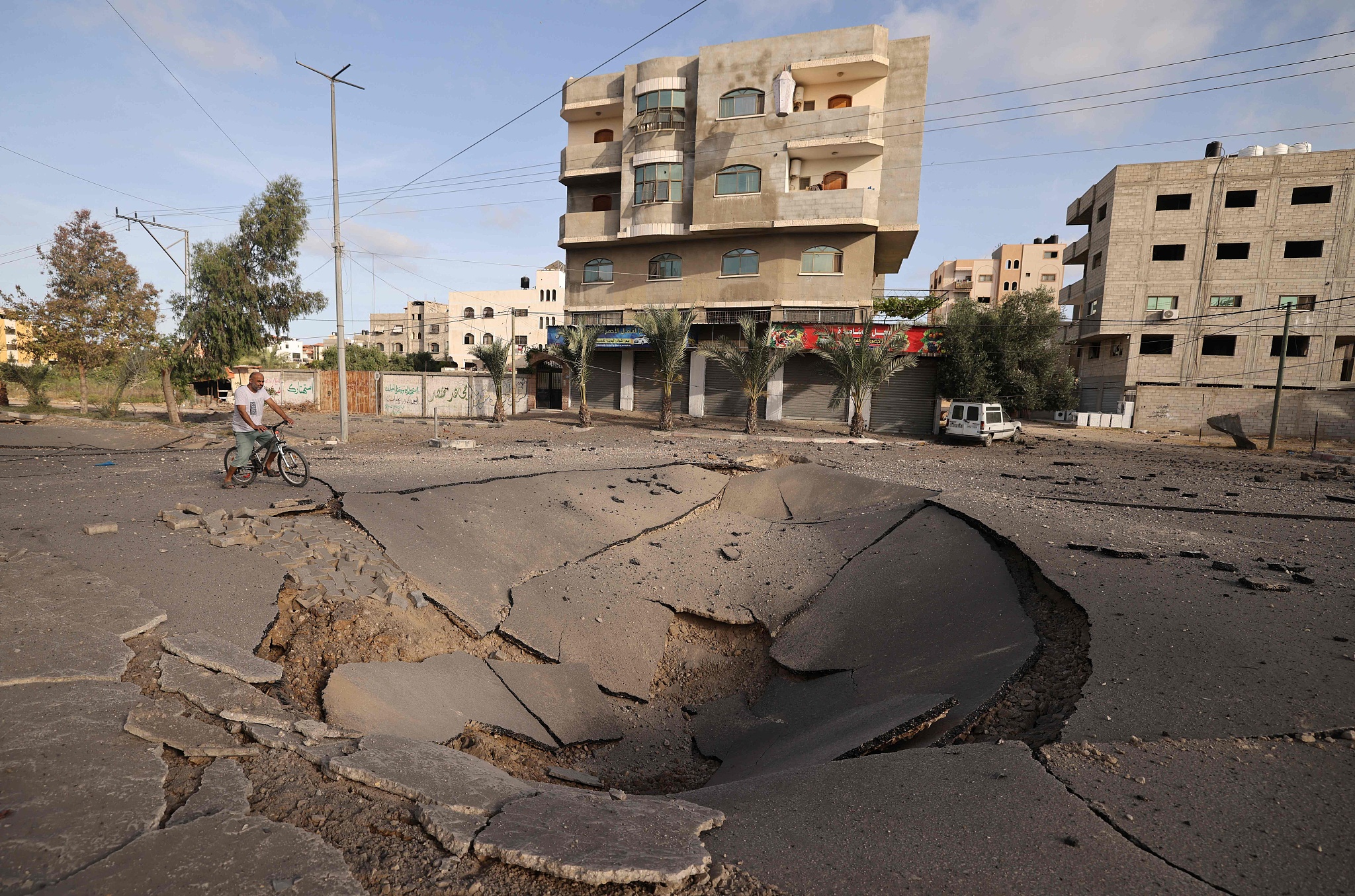 A Palestinian man rides his bicycle past a huge crater on a damaged main road in Gaza City's Dahduh neighborhood, following Israeli bombardment on May 17, 2021. /CFP

A Palestinian man rides his bicycle past a huge crater on a damaged main road in Gaza City's Dahduh neighborhood, following Israeli bombardment on May 17, 2021. /CFP

But within hours, the border passage was shut after Israel said mortars targeted the site and injured a young soldier.

OCHA said only five vehicles made it in before the transfer process was halted. The WFP convoy could not get through.

Meanwhile, the Egypt-controlled Rafah border crossing was also opened to allow foodstuffs and 65 tonnes of medical supplies into Gaza.

Concerns are also mounting over Gazans' access to drinking water amid punishing power outages and attacks on water treatment facilities.

At a press conference in Geneva on Tuesday, Jens Laerke, an OCHA spokesperson, said that a desalination plant in the northern part of the enclave has gone out of service, depriving a quarter of a million from fresh water.

"In total, an estimated 800,000 people are lacking regular access to safe water.… The need for food and cash support is also increasing," Laerke said.

Water wells and pumping stations are among the more than 300 structures in Gaza damaged by Israeli bombs since last week, Oxfam said.

"These facilities are the only way for people living in Gaza to get clean water and any disruption to them creates immediate distress," it added.

Growing calls for a ceasefire have so far fallen on deaf ears as the death toll on both sides grows.