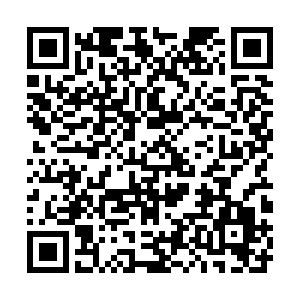 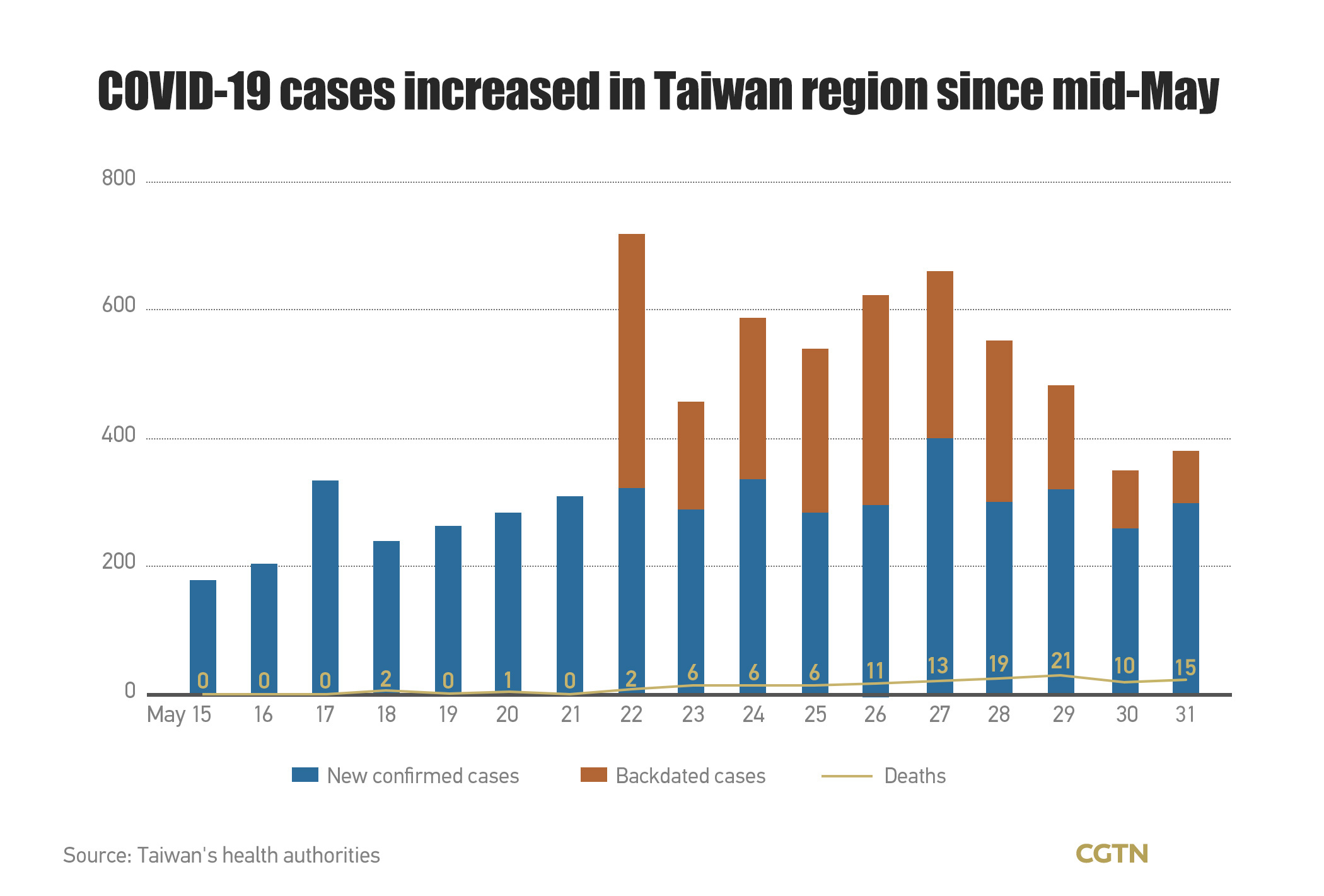 China's Taiwan region has been battling a worsening COVID-19 outbreak in recent days as the island deals with a soft lockdown and sees no sign of infections letting up.

The island, home to a population of 23.5 million, has seen an uninterrupted growth of COVID-19 cases since May 15, with the highest confirmed cases at 721 and a record death count of 21.

Besides reporting 274 new local COVID-19 cases, 15 deaths, 73 new infections to previous daily tallies on Monday, local health authorities marked the smallest backlog of cases since it first began revising past totals on May 22.

Stopping the virus this time is difficult, partly because of a local policy that requires airplane pilots to quarantine for three days, but they don't need a negative test to get out of quarantine. This allowed the virus to further spread, causing the latest outbreak on the island.

It is under its second-highest level of curbs to stop the spread of infections, including limiting personal gatherings and closing entertainment venues.

The number of people seeking COVID-19 tests has surged as Taiwan's outbreak worsened dramatically in the past two weeks.

Although the island has boasted its successful measures against the pandemic and claimed being preparing for the potential outbreak for over a year, test facilities are struggling to keep up, often causing days of delays on test results since the virus suddenly hit the island.

Local residents have had to wait for up to nine days for COVID-19 test results, Bloomberg reported on Wednesday.

The health authorities on the island started to report confirmed infections based on when tests are taken rather than when results come in, causing confusion and frustration among the public. The infection tally has had to be revised daily in recent days by adding its backdated cases. This made it more difficult for local authorities to analyze how the COVID-19 situation has developed so as to respond properly.

Reports of recent COVID-19 cases have prompted criticism from opposition parties for delays in testing and accurate case counts, but Chen Shih-chung, the head of Taiwan's health authority, said that the situation is getting better with more machines installed for quicker and more accurate tests. 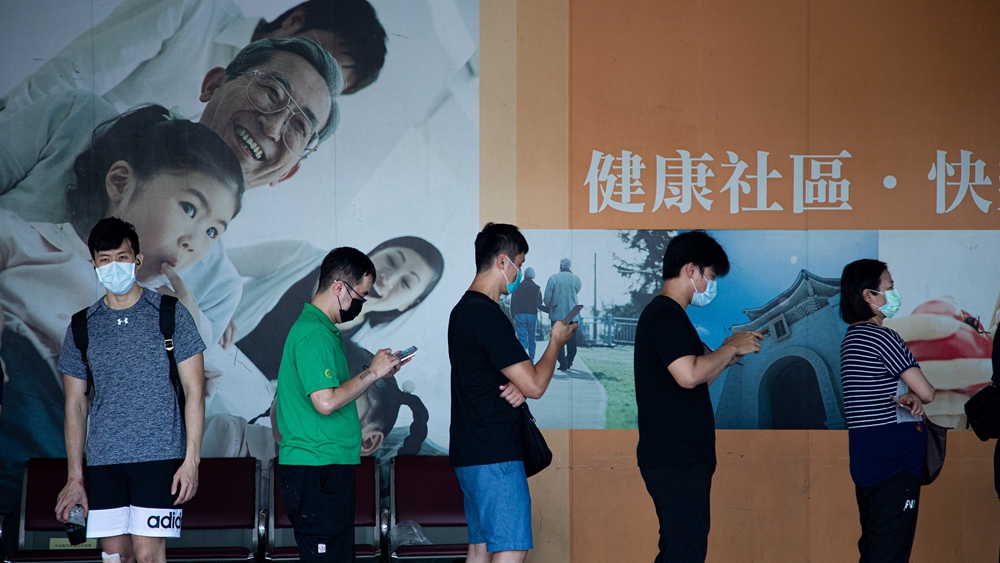 Frontline workers queue up outside of the hospital to get a vaccination in Taipei, May 16, 2021. /CFP

Frontline workers queue up outside of the hospital to get a vaccination in Taipei, May 16, 2021. /CFP

A long way from mass vaccination

Taiwan region has signed deals with two local companies to provide up to 20 million doses of COVID-19 vaccines, according to the local news on Sunday.

It is said local authorities signed deals with Medigen Vaccine Biologics Corp. and United Biomedical Inc. on Friday for five million doses each and had oral agreements for another five million each, for a total of 20 million shots.

However, neither of the companies' vaccines has been formally approved for use, and both are still undergoing trials, which local authorities said are going well.

The island has only vaccinated around one percent of its more than 23 million residents but has almost 30 million shots on order from AstraZeneca, Moderna and two local firms, Reuters reported.

Chen announced on May 25 Taiwan is expecting two million doses of COVID-19 vaccines to arrive in June and there will be 10 million doses in total by August.

The island has received 400,000 doses of AstraZeneca vaccine purchased through COVAX as separate batches of AstraZeneca have been shipped to Taiwan region in March and April. The island is still looking to fill a shortage of vaccines against the pandemic.

"Coming to the mainland to get vaccinated against COVID-19" is being considered by many Taiwan residents given the grave situation and shortage of vaccines there, Yok Mu-ming, former president of the pro-unification New Party of Taiwan, told Global Times.

Sharing his experiences, including strict quarantine and swab tests, Yok urged Taiwan residents who are able to come to the mainland to get vaccinated there.

Taiwan authorities blamed the mainland on Wednesday for blocking a deal earlier this year to obtain doses of the BioNTech vaccine, while the mainland strongly denied such a claim during a press conference on Thursday.

"The accusation is fabricated out of thin air and once again reveals the Democratic Progressive Party (DPP)'s tactic of shifting blame to the mainland," Zhu Fenglian, spokesperson for the Taiwan Affairs Office of the State Council said.

Besides providing COVID-19 vaccines, Zhu said last Monday that "if needed, we will consider sending experts to the island to share experiences and provide consultations on the fight against the virus."

Wu Yifang, chairman of Fosun Pharma, said that the company is willing to give Taiwan COVID-19 vaccines, according to Reuters. The company has also enhanced its efforts in providing the vaccine to Taiwan since last year.

South China Morning Post reported that Taipei-based Sun Yat-sen school said it had agreed to receive 10 million doses donated by a Beijing-based cultural group. However, any donations still need to be approved by local authorities.

Some residents on the island said it's time to prioritize people's lives instead of taking a political stance in the face of the latest COVID-19 outbreak. "I think if authorities in Taiwan always take a politically opposing stance against the Chinese mainland, the livelihood of residents in Taiwan can't be ensured given the serious vaccine shortage," Lin Li-teng, a food processing worker told CGTN.