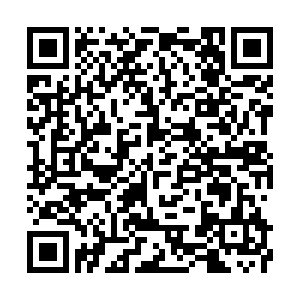 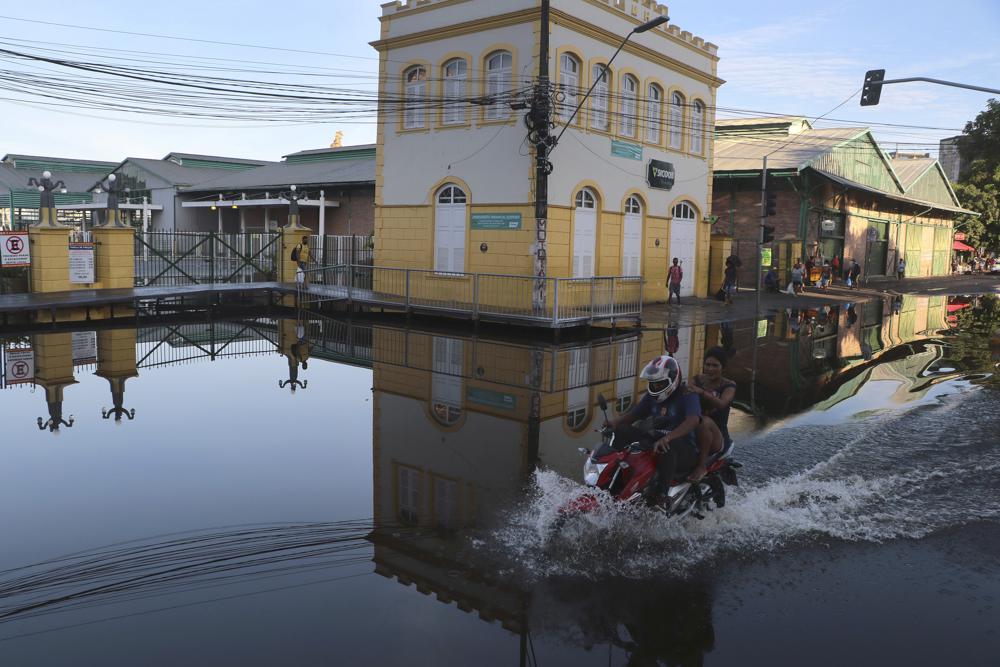 Rivers around the biggest city in Brazil's Amazon rainforest have swelled to levels unseen in over a century of record-keeping, according to data published Tuesday by Manaus' port authorities, straining a society that has grown weary of increasingly frequent flooding.

The Rio Negro was at its highest level since records began in 1902, with a depth of 29.98 meters at the port's measuring station. The nearby Solimoes and Amazon rivers were also nearing all-time highs, flooding streets and houses in dozens of municipalities and affecting some 450,000 people in the region.

Higher-than-usual precipitation is associated with the La Nina phenomenon, when currents in the central and eastern Pacific Ocean affect global climate patterns. Environmental experts and organizations including the U.S. Environmental Protection Agency and the National Oceanic and Atmospheric Administration say there is strong evidence that human activity and global warming are altering the frequency and intensity of extreme weather events, including La Nina. 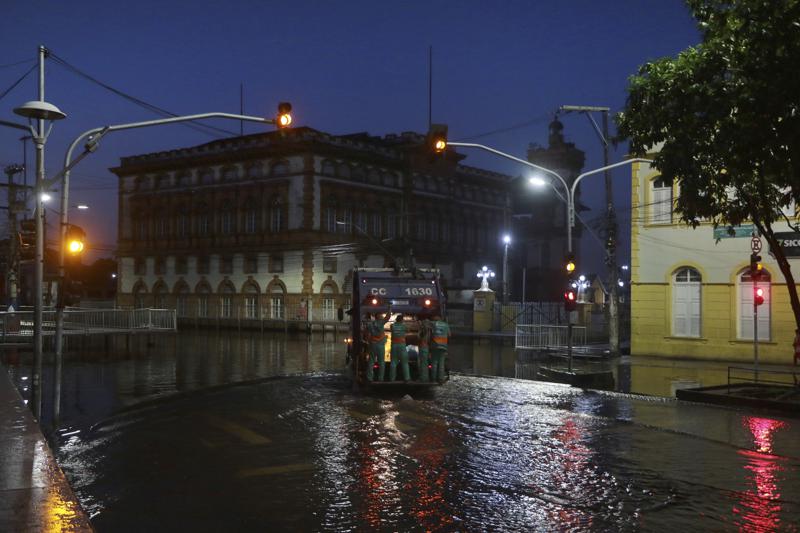 City workers ride on the back of a garbage truck navigating through a street flooded by the Negro River in downtown Manaus. /AP

City workers ride on the back of a garbage truck navigating through a street flooded by the Negro River in downtown Manaus. /AP

Seven of the 10 biggest floods in the Amazon basin have occurred in the past 13 years, data from Brazil's state-owned Geological Survey shows.

"If we continue to destroy the Amazon the way we do, the climatic anomalies will become more and more accentuated," said Virgílio Viana, director of the Sustainable Amazon Foundation, a nonprofit. "Greater floods on the one hand, greater droughts on the other."

Large swaths of Brazil are currently drying up in a severe drought. But in Manaus, 66-year-old Julia Simas has water ankle-deep in her home. Simas has lived in the working-class neighborhood of Sao Jorge since 1974 and is used to seeing the river rise and fall with the seasons. Simas likes her neighborhood because it is safe and clean. But the quickening pace of the floods in the last decade has her worried.

"From 1974 until recently, many years passed and we wouldn't see any water. It was a normal place," she said. 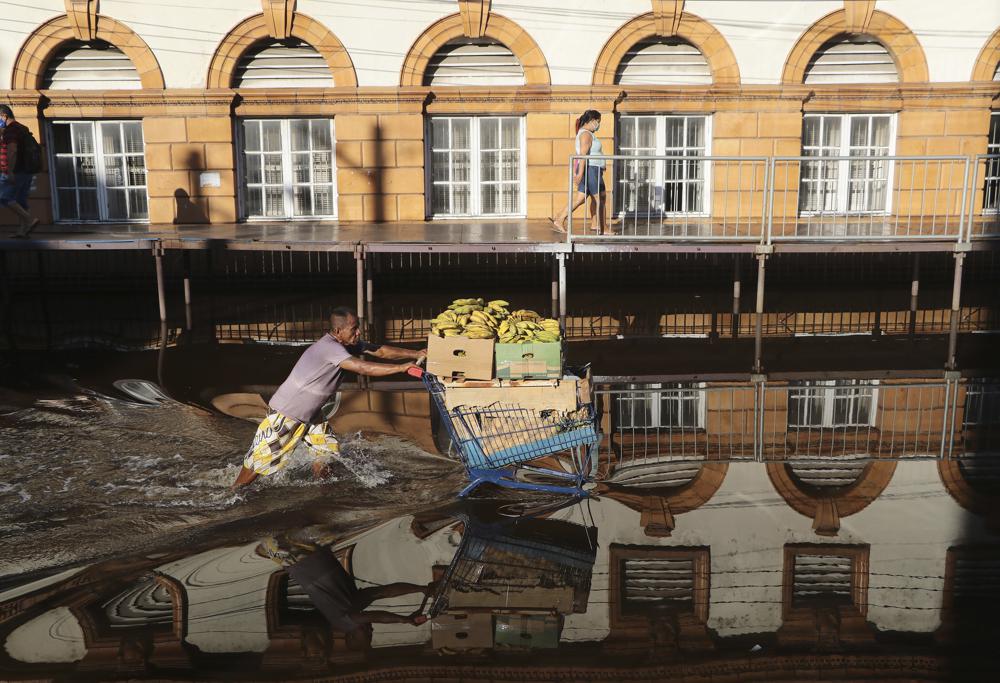 A man pushes a shopping cart loaded with bananas on a street flooded by the Negro River, in downtown Manaus. /AP

A man pushes a shopping cart loaded with bananas on a street flooded by the Negro River, in downtown Manaus. /AP

When the river does overflow its banks and flood her street, she and other residents use boards and beams to build rudimentary scaffolding within their homes to raise their floors above the water.

Flooding also has a significant impact on local industries such as farming and cattle ranching. Many family-run operations have seen their production vanish under water. Others have been unable to reach their shops, offices and market stalls or clients.

"With these floods, we're out of work," said Elias Gomes, a 38-year-old electrician in Cacau Pirera, on the other side of the Rio Negro, though noted he's been able to earn a bit by transporting neighbors in his small wooden boat.

Gomes is now looking to move to a more densely populated area where floods won't threaten his livelihood. 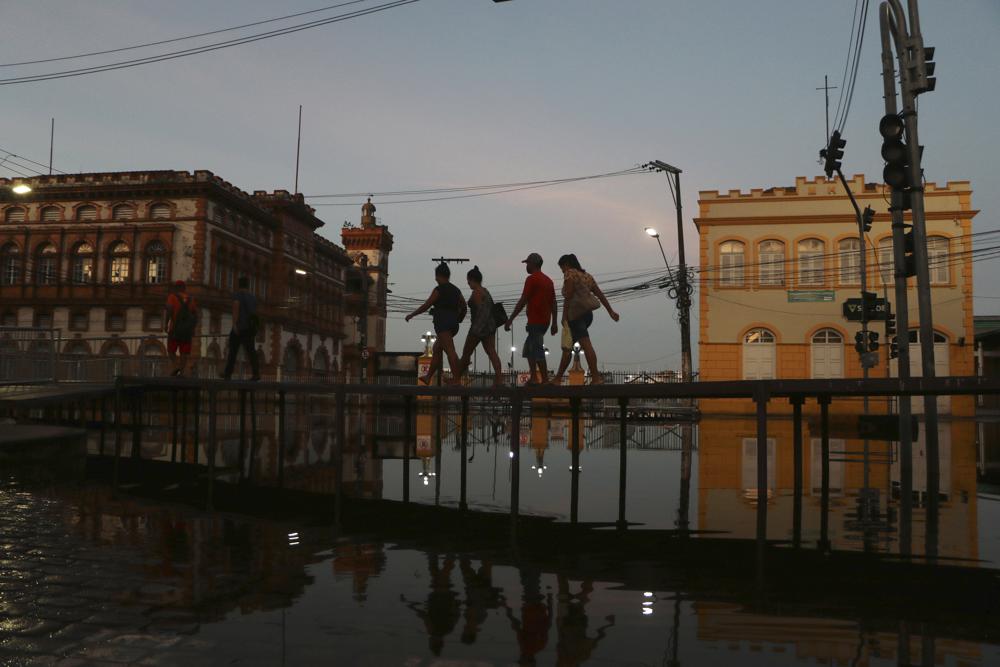 People walk on a wooden footbridge set up over a street in downtown Manaus. /AP

People walk on a wooden footbridge set up over a street in downtown Manaus. /AP

Limited access to banking in remote parts of the Amazon can make things worse for residents, who are often unable to get loans or financial compensation for lost production, said Viana, of the Sustainable Amazon Foundation. "This is a clear case of climate injustice: Those who least contributed to global warming and climate change are the most affected."

(All photos via AP.)