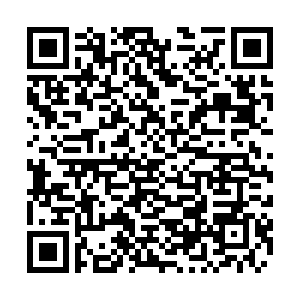 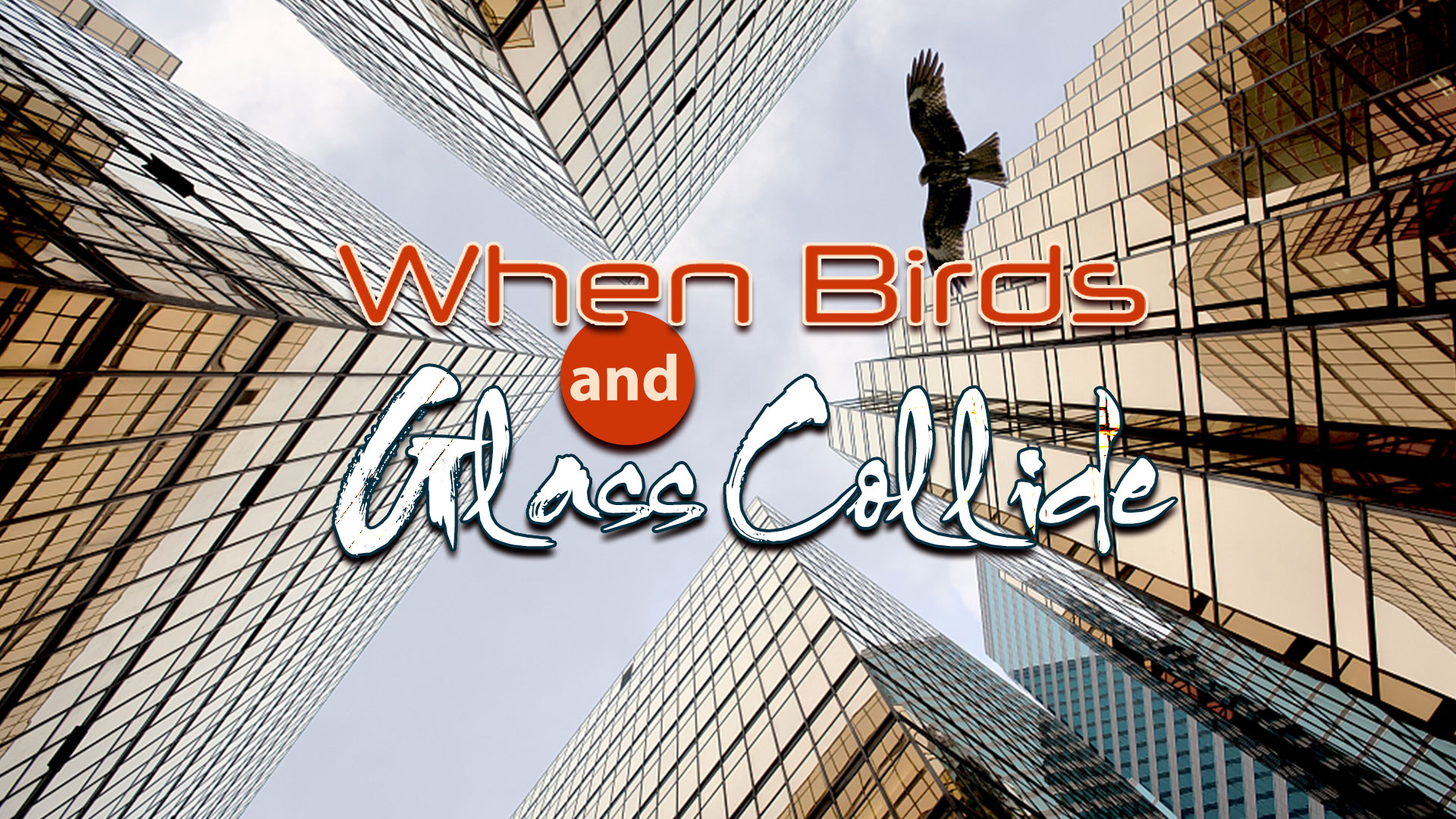 In 2018, Shi Danyang, a student at Duke Kunshan University in east China's Jiangsu Province, saw a tiny warbler with greenish feather majestically flying toward the glass window of her three-storied school building.

But instead of maneuvering, the bird hit the glass, making a gentle thumping sound and leaving behind a tiny mark on the window.

Shocked by the bird's poor navigation capabilities, she later learned that the warbler's dead body hurtled to the ground and was cleared off by the staff on duty. The bird-hit stain on the glass and the feeble noise of collision symbolizes the unnoticed deaths that buildings in cities have caused.

Every year between 100 million and one billion birds die from collisions with buildings in the U.S alone, according to the U.S. Fish & Wildlife Service. Residential buildings fewer than four-stories also contribute to such fatalities.

As carcasses of birds are immediately swept away by active sanitation crews or devoured by predators, most of such incidents go unseen and unreported. 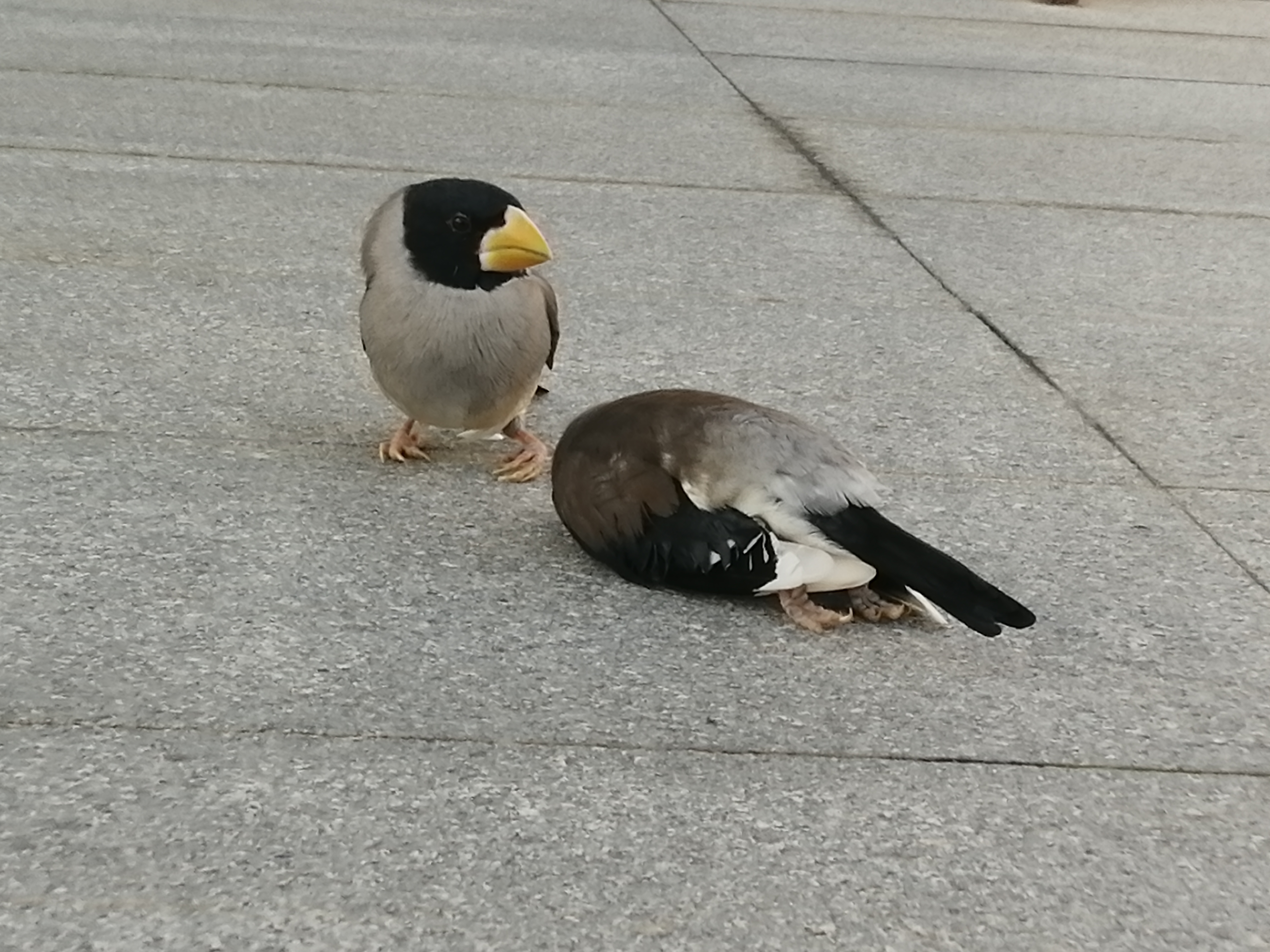 A yellow-billed grosbeak stands beside another one of the same breed that was killed in a collision with windows at Duke Kunshan University. /Courtesy of Ma Dongyuan

A yellow-billed grosbeak stands beside another one of the same breed that was killed in a collision with windows at Duke Kunshan University. /Courtesy of Ma Dongyuan

The building that the bird crashed into has enormous glass windows – a standard architectural design that often causes fatal collisions for birds in cities. Birds get confused with the reflection of clouds and trees on these windows, and they fly into them, leading to their painful death.

The situation in China is equally jarring, said Li Binbin, assistant professor of Environmental Sciences at Duke Kunshan University, who is leading the country's first research team for a systematic study into such deaths.

The biggest challenge is the lack of data, said Li, since there is no nationwide research on the subject.

It's not only the reflection of clouds and trees that confuse birds, but lights fitted on the buildings can also lure them, making them vulnerable to collisions with the buildings. Such incidents spiral during spring and fall migration seasons when they fly through unfamiliar territories.

Urbanization certainly contributes to bird collision, said Li. Glass-covered and illuminated skyscrapers that birds often find hard to avoid are a recent creation of human development, something that birds have not grown accustomed to, she said. 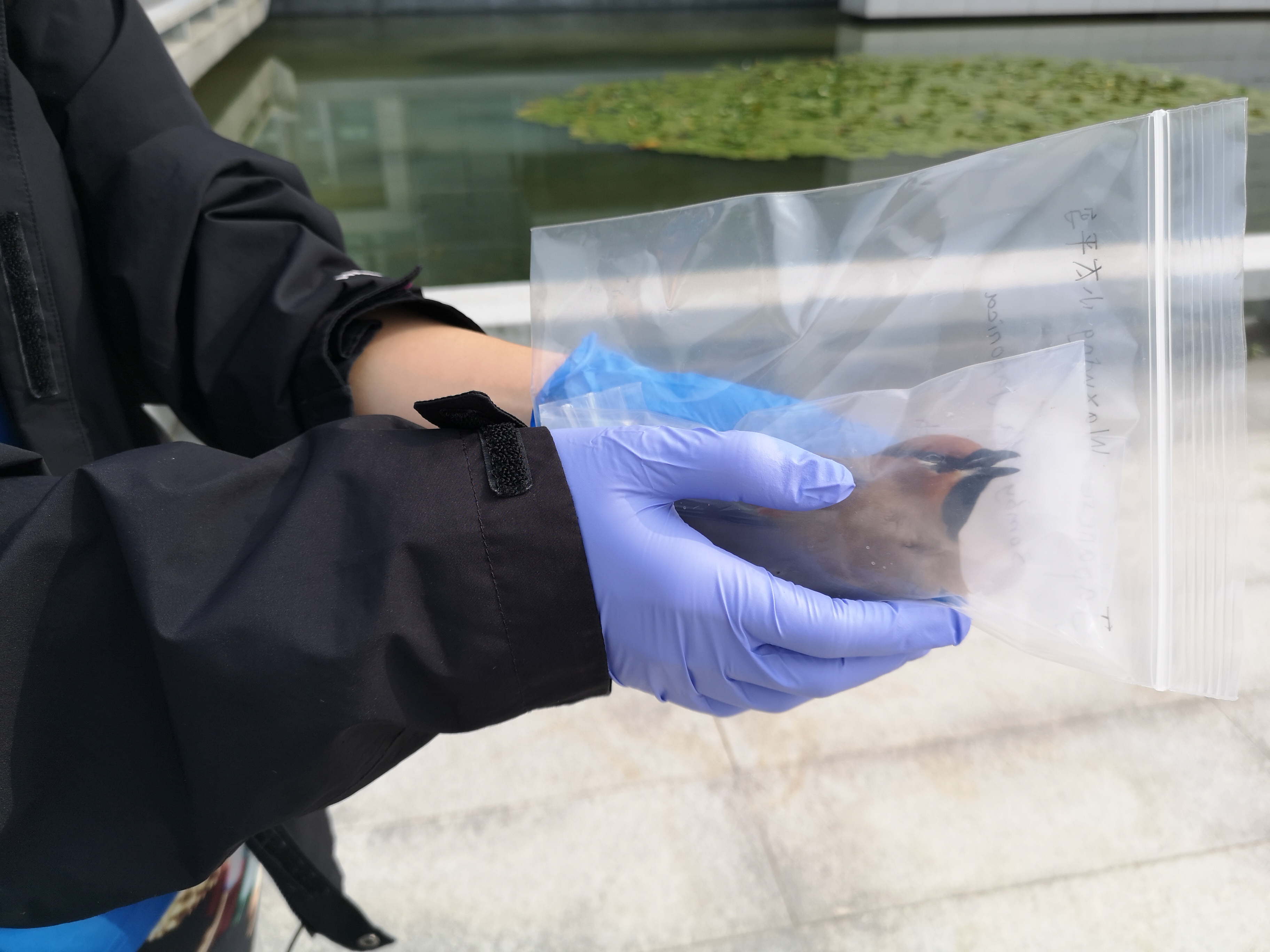 Student volunteer holds the body of a Japanese waxwing that was killed in collision at Duke Kunshan University. /Courtesy of Shi Danyang

Student volunteer holds the body of a Japanese waxwing that was killed in collision at Duke Kunshan University. /Courtesy of Shi Danyang

Ten months into Shi's engagement in the project, she found 10 dead bodies of birds at her school's building. A majority of them were warblers. Some survived the collision but sustained grievous injuries, but most of them died from internal bleeding or bruising.

"We are proud of having environmentally-friendly buildings at our school campus, yet it is unfortunate that the buildings do not take bird safety into consideration," she said.

Need for green and bird-friendly buildings

Bird safety can be part and parcel of green construction, said Lu Mingyi, Deputy Secretary-General at China Youth Climate Action Network, an NGO which has partnered with Duke Kunshan University to launch a nationwide study into the situation of bird-window collision in China.

Buildings that adhere to environmentally-friendly standards, including energy efficiency and use of recyclable materials, are now certified as green construction, the most prominent of which is the U.S. Green Building Council (USGBC) Leadership in Energy and Environmental Design, or LEED pilot program.

Being bird-friendly can be made into part of the standards, she explained. 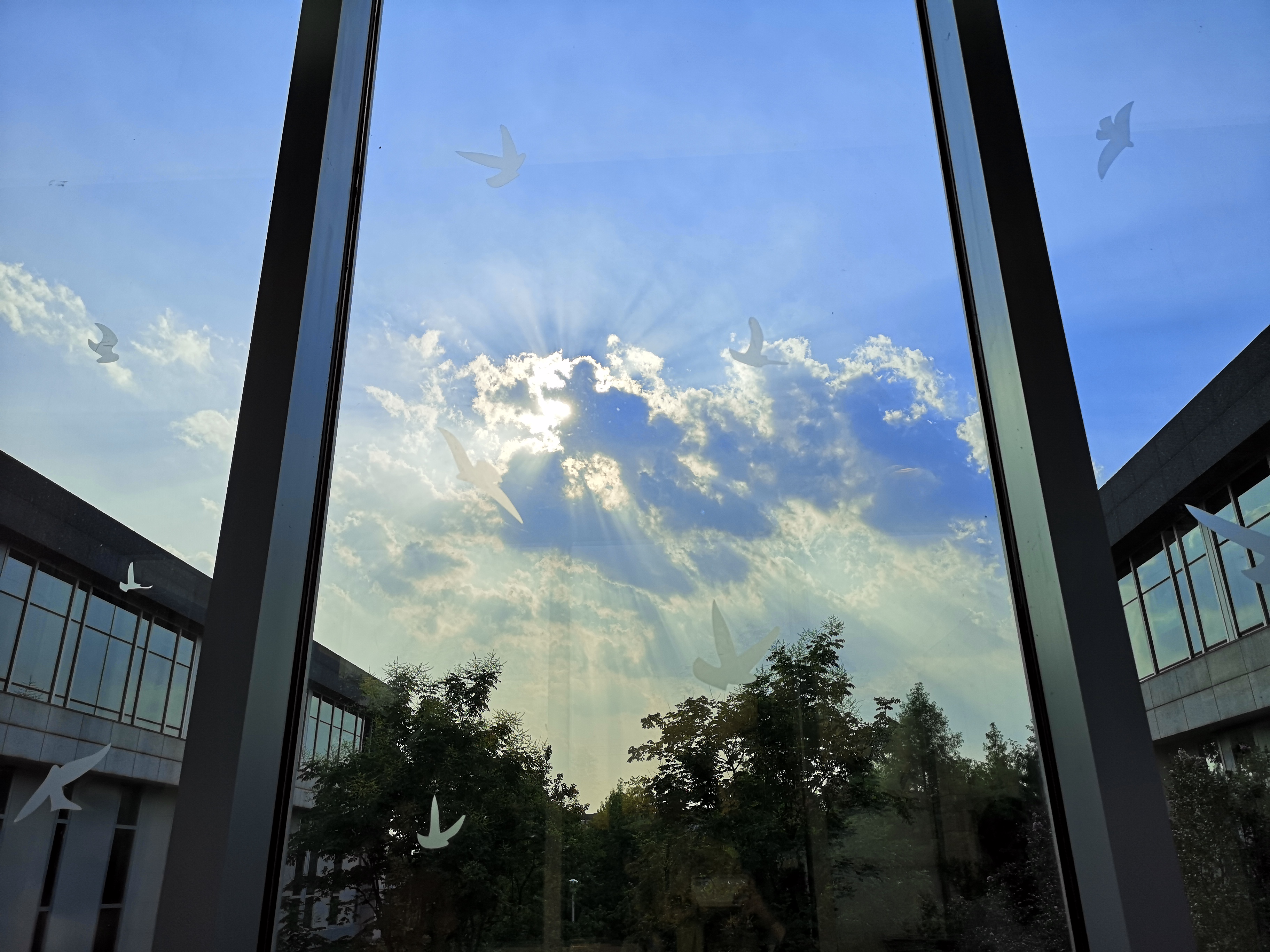 Bird-shaped stickers that are put on the glass to prevent bird collision at Duke Kunshan University. /Courtesy of Shi Danyang

Bird-shaped stickers that are put on the glass to prevent bird collision at Duke Kunshan University. /Courtesy of Shi Danyang

In 2020, New York City passed a bill requiring all new buildings' materials to meet bird-friendly standards. Jacob K. Javits Convention Center, the city's top bird-killing building, was renovated to replace its windows with fritted glass, which led to a 90-percent reduction of bird deaths, according to NYC Audubon.

At Duke Kunshan University, Shi and her schoolmates used bird-shaped stickers to decorate the windows where most collisions happened. In a year, the simple effort resulted in no collision incident at the site.

Though the solutions appear to be easy, there is still a long way to go toward a full embrace of the solutions, said Lu. 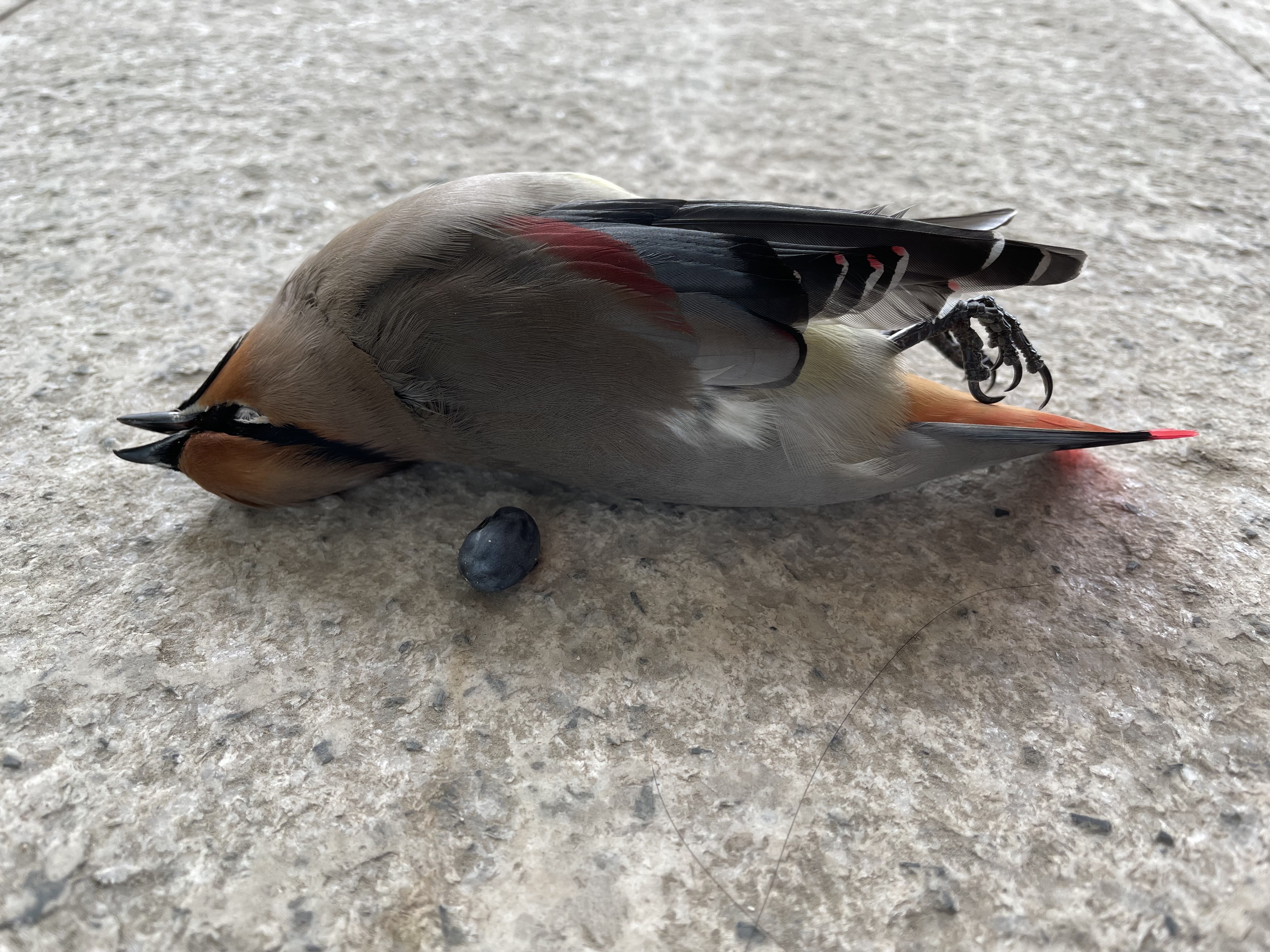 A dead bird lies on the floor. /Courtesy of Liao Shuyue

A dead bird lies on the floor. /Courtesy of Liao Shuyue

"There is a lack of awareness of the problem. While most people are aware of the fact that wetland degradation is a leading cause of the death of birds, bird-window collision is rarely given due attention," she noted.

Part of the resistance is that those patterns can obstruct people's views and may damage the aesthetics of buildings, so architecture designers are trying to use ultraviolet-reflecting patterns that only birds can see, while humans can't, on the glass surface.

"This ultraviolet material is invisible to humans, so the view from the window is not impacted," said Celyn Bricker, a designer working on an art project to apply ultraviolet patterns on windows to prevent bird collisions. The initiative focuses on temporarily illuminating the buildings at night to reveal the invisible ultraviolet pattern to the human eye to raise awareness on the issue.

The issue of bird collision has not attracted the attention of policymakers and real estate giants in China, making it challenging to make buildings birds-friendly. 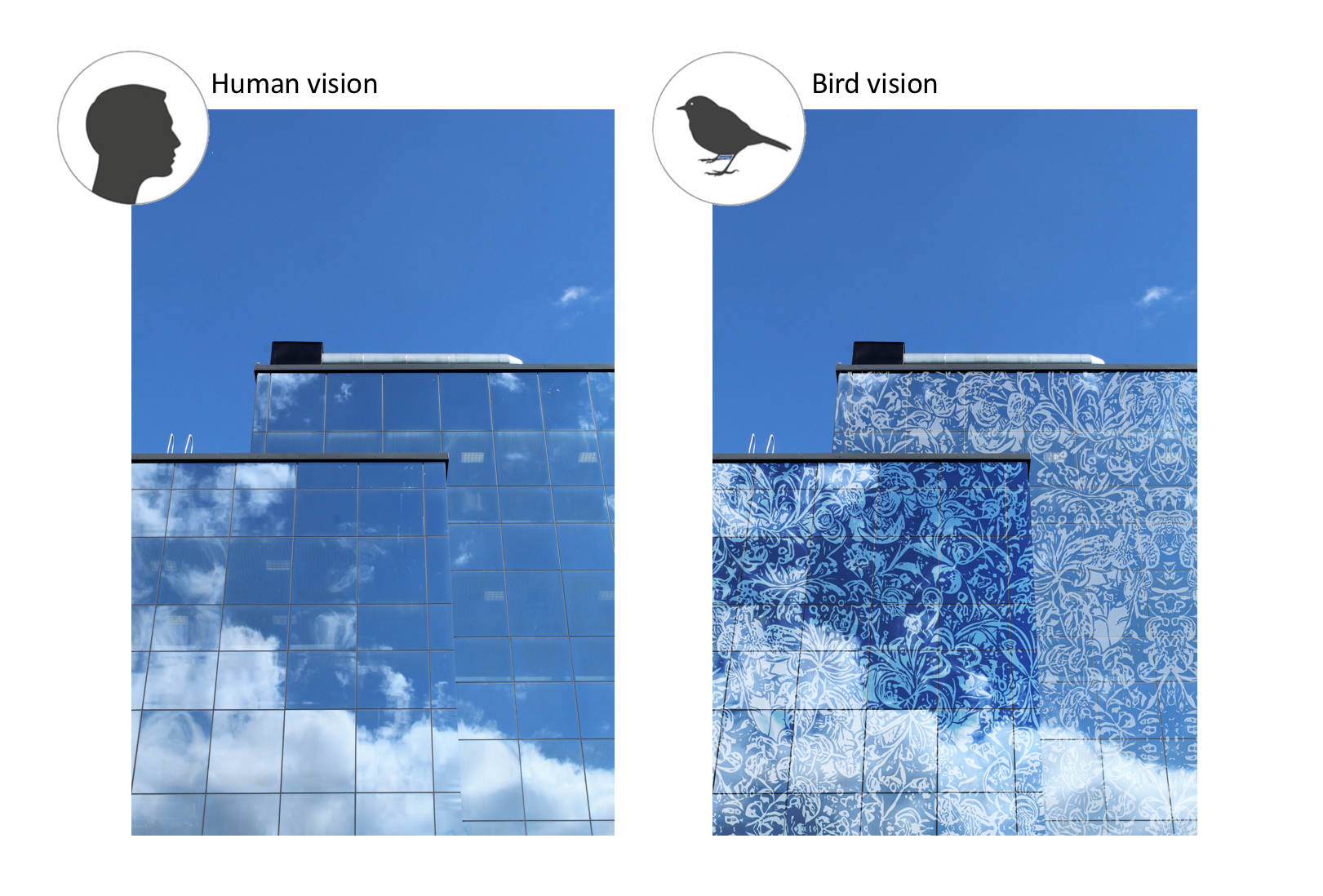 How ultraviolet-reflecting patterns are perceived by the human and bird eyes. /Courtesy of Celyn Bricker

How ultraviolet-reflecting patterns are perceived by the human and bird eyes. /Courtesy of Celyn Bricker

Stickers or ultraviolet paint, which can prevent birds from colliding into the buildings, are hard to procure in China because there is no market demand for them. Shi said volunteers at her school failed to buy the stickers from shops domestically, and, in the end, they asked for help from friends in the U.S.

"Before humans created glass buildings, birds have been living perfectly safe in the world. Given that humans are the ones who created the problem, we ought to find the solutions," said Liao Shuyue, a third-year student at Duke Kunshan University who is also a volunteer in the program.

Volunteers have motivated the school administration to incorporate bird safety into the design of the school buildings, and the newly constructed teaching buildings are now some of the first bird-friendly buildings in China.

They are now trying to ensure that such efforts are made across the country.