Download
Graphics: A run on guns in the U.S.
by Hu Xuechen 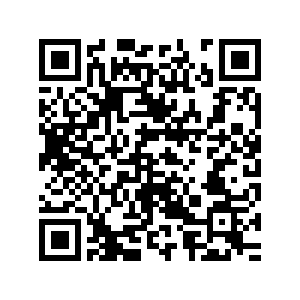 He entered the supermarket and followed an old lady with a little boy in the shopping cart. Then he pulled out a gun.

A one-year-old boy and his 69-year-old grandmother were shot dead in the U.S. state of Florida on Thursday. The gunman killed the boy with a single shot before struggling with the grandmother and fatally shooting her, according to local authorities.

Yet, this is only one of the heartbreaking gun-related tragedies that have already taken place in the U.S. in 2021. In the first half of the year, there were 19,537 deaths from gun violence. The number was 43,558 for the entire 2020, according to the Gun Violence Archive.

Although thousands of lives are taken each year in the United States, the gun purchase regulations remain loose. 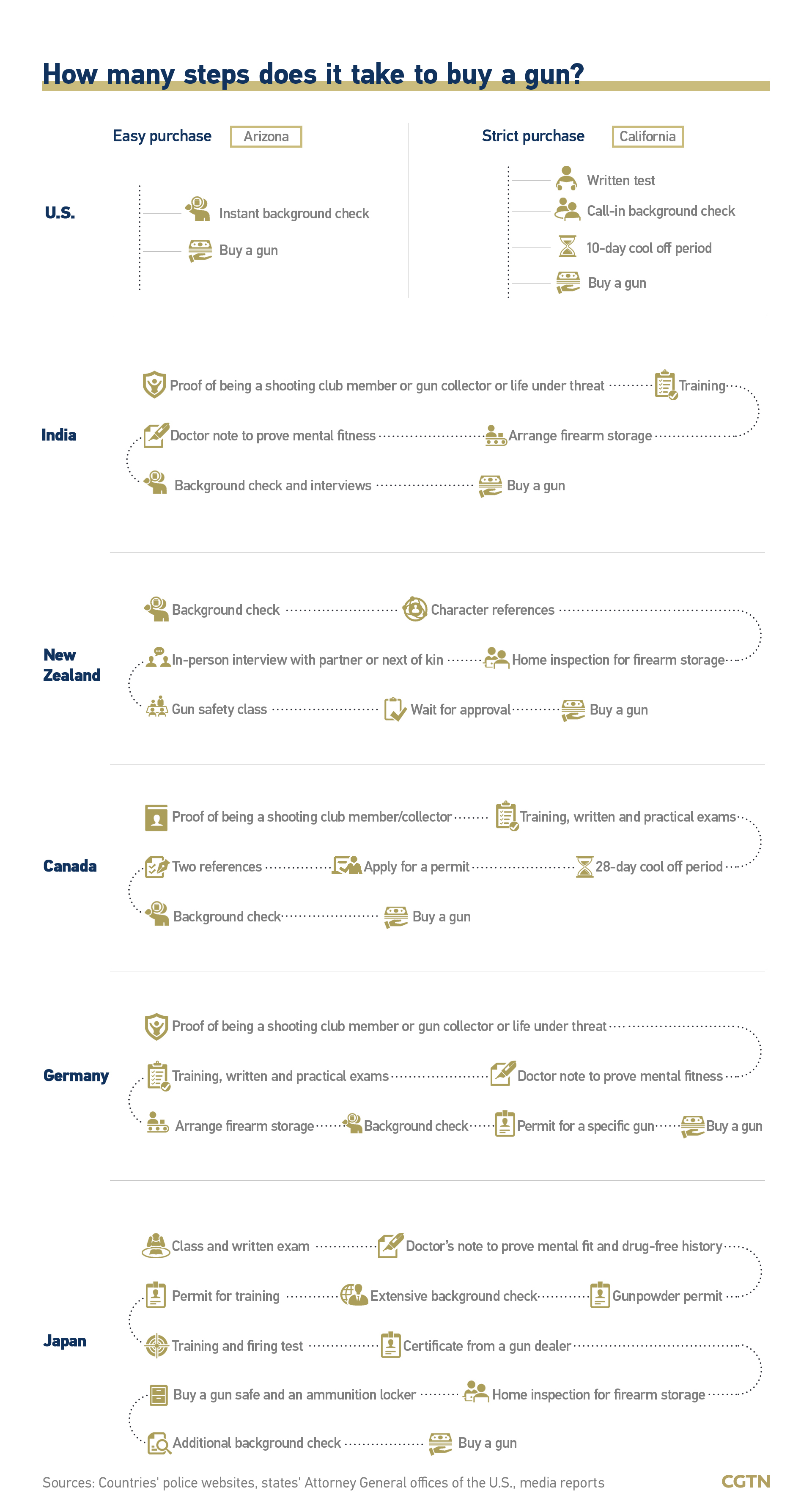 U.S. federal law establishes a baseline national standard regarding individuals' eligibility to acquire and possess firearms. The law requires that a person is prohibited from acquiring or possessing firearms if they have been convicted of certain crimes or become subject to certain court orders related to domestic violence or a serious mental condition.

Since states within the U.S. implement different regulations on firearm purchases, CGTN selected the procedures used by two states to compare with five countries where people can legally possess firearms. The two states – Arizona and California – are the most and least gun-friendly in the country, based on ranking from the Guns & Ammo magazine, a special interest firearms publication.

Arizona, one of the easy-purchase states, only requires the buyer to pass an instant background check to buy a gun. While California, one of the strictest states on gun regulation, requires four steps, including a written test, a direct contact from the dealer to the state justice department for a background check and a 10-day cool-off period.

In contrast, most of the five other countries CGTN picked require six steps or more to purchase a gun. The processes in these countries include mandatory training, written exams and in-person interviews with friends or family members.

Besides the relatively easy and quick process of buying a gun in the U.S., a loophole exists in background checking process. Federal law only requires all federally licensed firearms dealers, such as a gun store, to request a background check before making a sale. In other words, unlicensed sellers – those who sell guns online, at gun shows or anywhere else without a federal dealer's license – do not have to run any background checks.

According to Giffords Law Center, 22 states and Washington D.C. have extended the background check requirement beyond federal law to at least some private sales. Thirteen states and the District of Columbia require universal background checks at the point of sale for all sales and transfers of all classes of firearms, whether they are purchased from a licensed dealer or an unlicensed seller. Yet, for the rest of the states, the loophole remains open.

A recent Northeastern University and the Harvard Injury Control Research Center study indicated that 6.5 percent of U.S. adults, 17 million people, have purchased guns in the past year, up from 5.3 percent in 2019. 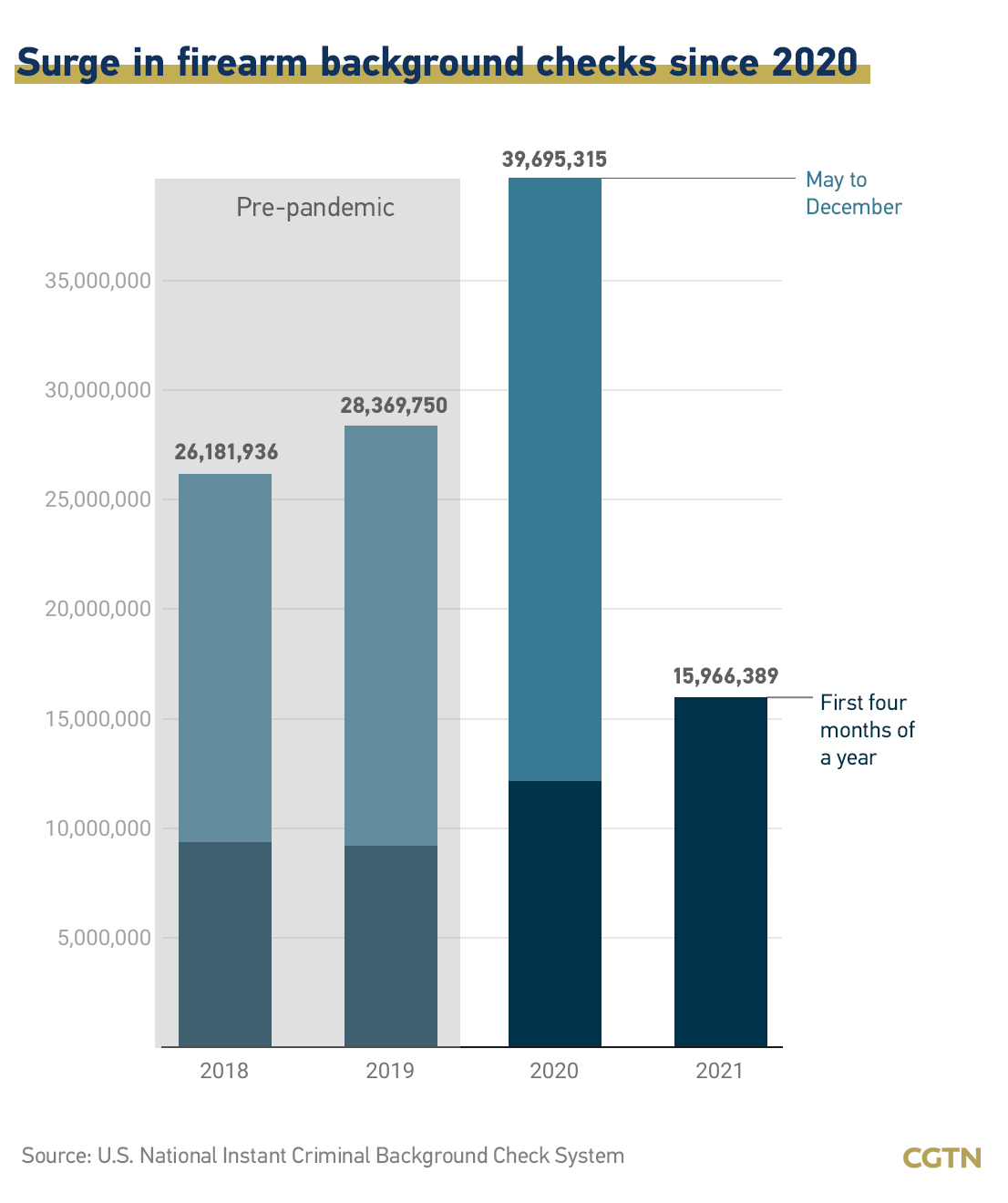 Data also shows that the number of firearm background checks initiated has soared since 2020, when the COVID-19 pandemic spread across the U.S. The trend has continued, as nearly 16 million background checks have already been initiated in the first four months of 2021 through the U.S. National Instant Criminal Background Check System, more than 30 percent up from the same period last year. 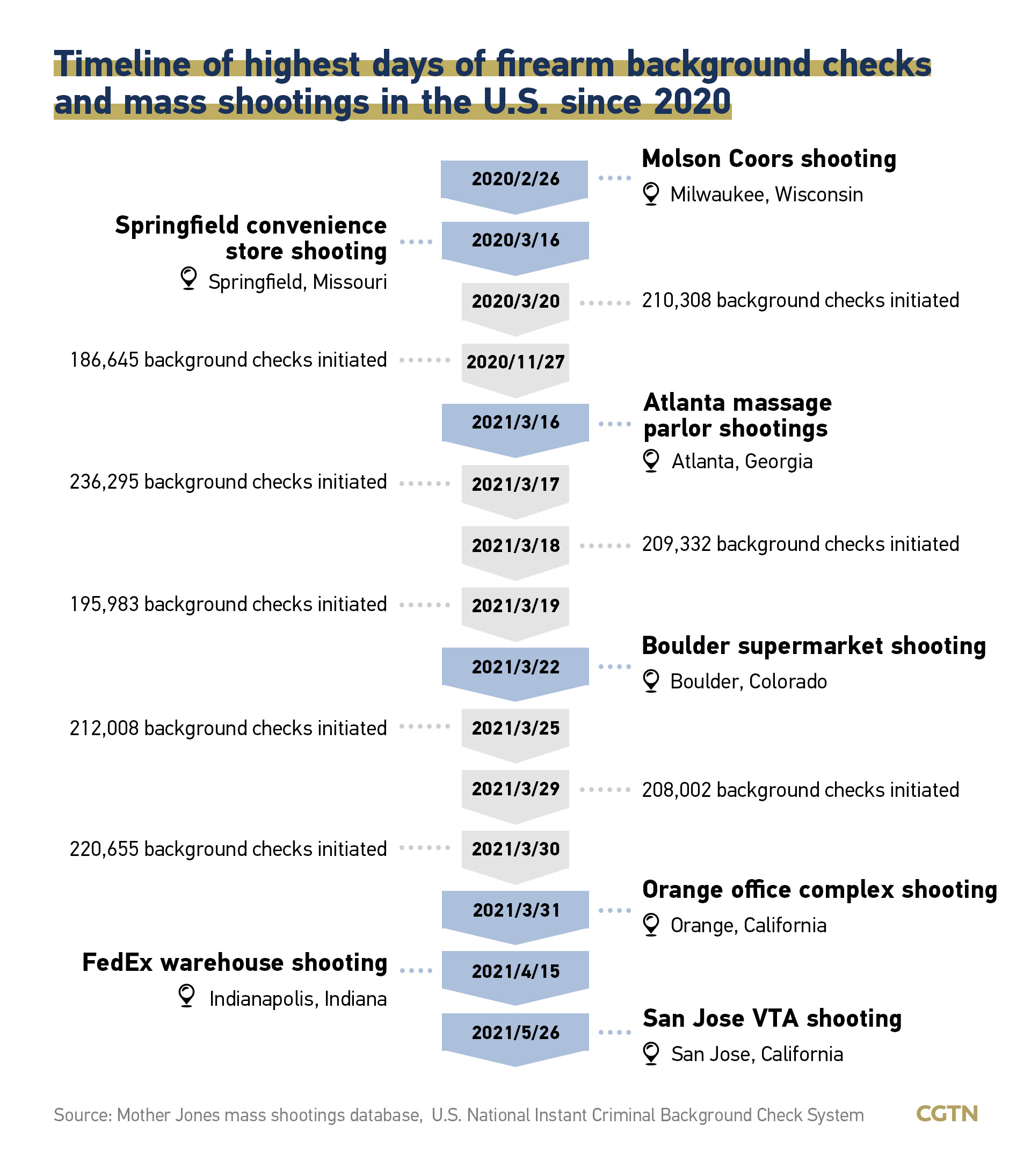 CGTN combined these dates with mass shootings since 2020, and found the peaks are close to massive gun violence tragedies. Personal protection tops the list of reasons why gun owners say they own a firearm, according to a Gallup survey in August 2019.