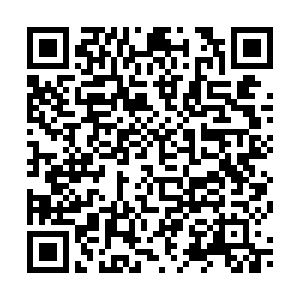 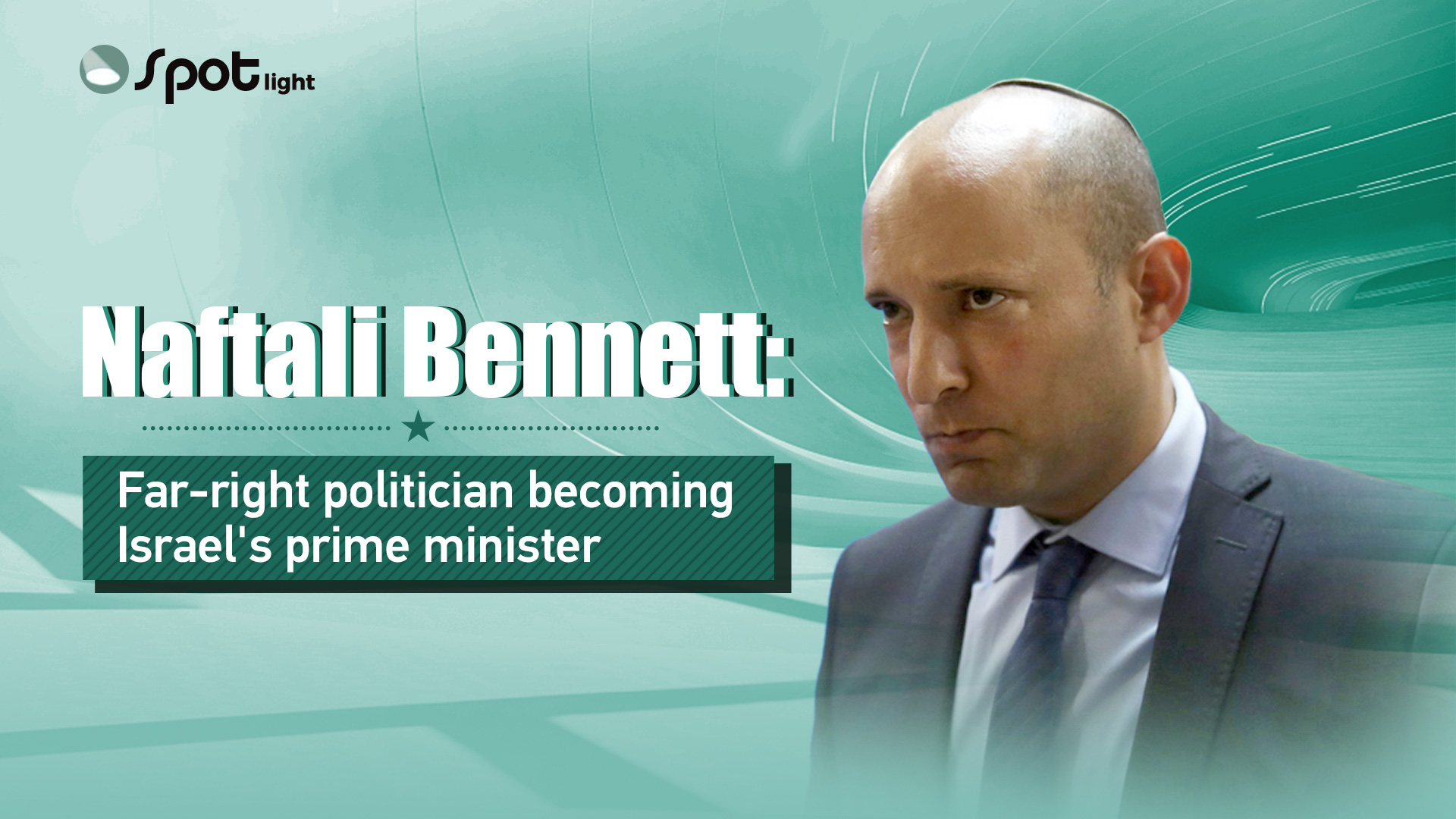 Sixty lawmakers from eight parties have approved a government that has ended the premiership of Benjamin Netanyahu.

The razor-thin 60-59 vote of confidence has made Bennett the first religious, Kippa-wearing Jew to lead a country that has long been run by secular Jewish parties.

As the leader of a party that has barely crossed the electoral threshold in recent elections, he was given the unlikely mandate after he agreed to work with the anti-Netanyahu camp, a motley alliance of center-right, left-wing and Arab parties, to unseat the country's longest-serving prime minister.

The 49-year-old, whose party holds only six seats in the 120-member Knesset, will also be heading a government that, for the first time, includes an Arab party – the Islamist Ra'am. As per the coalition agreements, Bennett will hold the PM's office for the first half of the four-year term, followed by Yesh Atid leader Yair Lapid.

The hard-right politician, whose inflammatory comments often make media headlines, will have to fend off doubts over his ability to unify a country that's blighted by political fragmentation and division.

"To Israeli citizens I say: This is a sensitive moment, of political change. I call on all, to demonstrate maturity and restraint," Bennett said as he was sworn in. 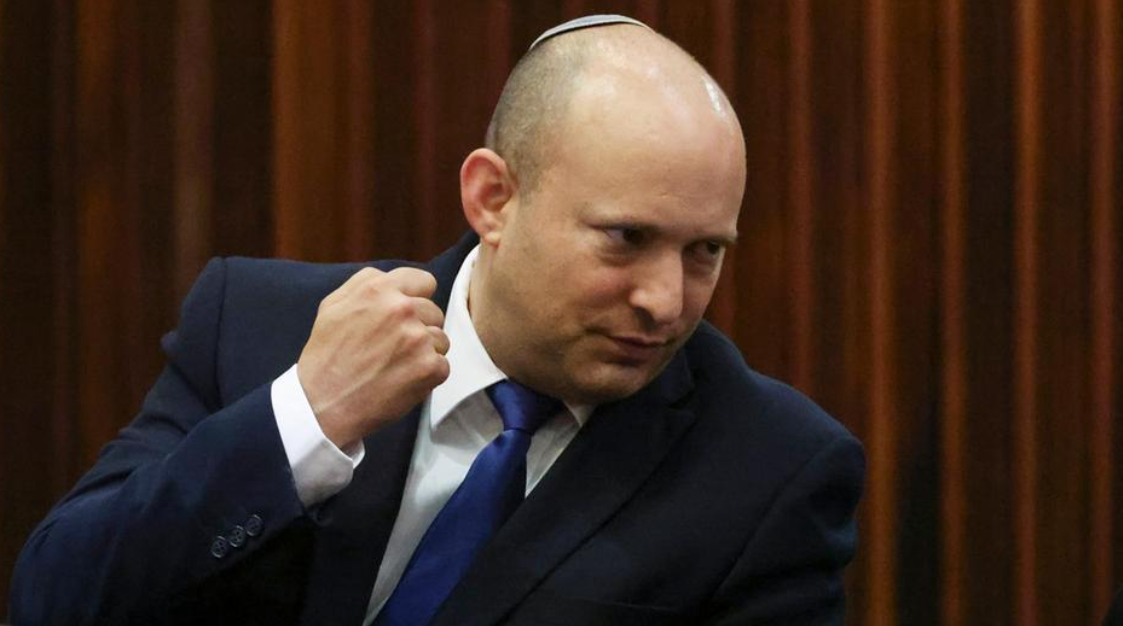 Who is Naftali Bennett?

Since his entry into frontline politics, Bennett has presented himself as an ultranationalist, striving to captivate an Israeli electorate that's increasingly shifting to the right.

With rhetoric that's often offensive to the Palestinians, he has pushed for the annexation of the occupied West Bank and said things that stoked tension between Jewish and Arab Israelis.

But none of these labels accurately sketch the contours of the new prime minister.

Bennett emphasizes religious observances but rarely talks about the Talmud or borrows wisdom from the Torah. He calls for the expansion of Jewish settlements but has never sought to build a house in the West Bank. And he has spent his life aiming carefully positioning himself, searching for the right opportunity. 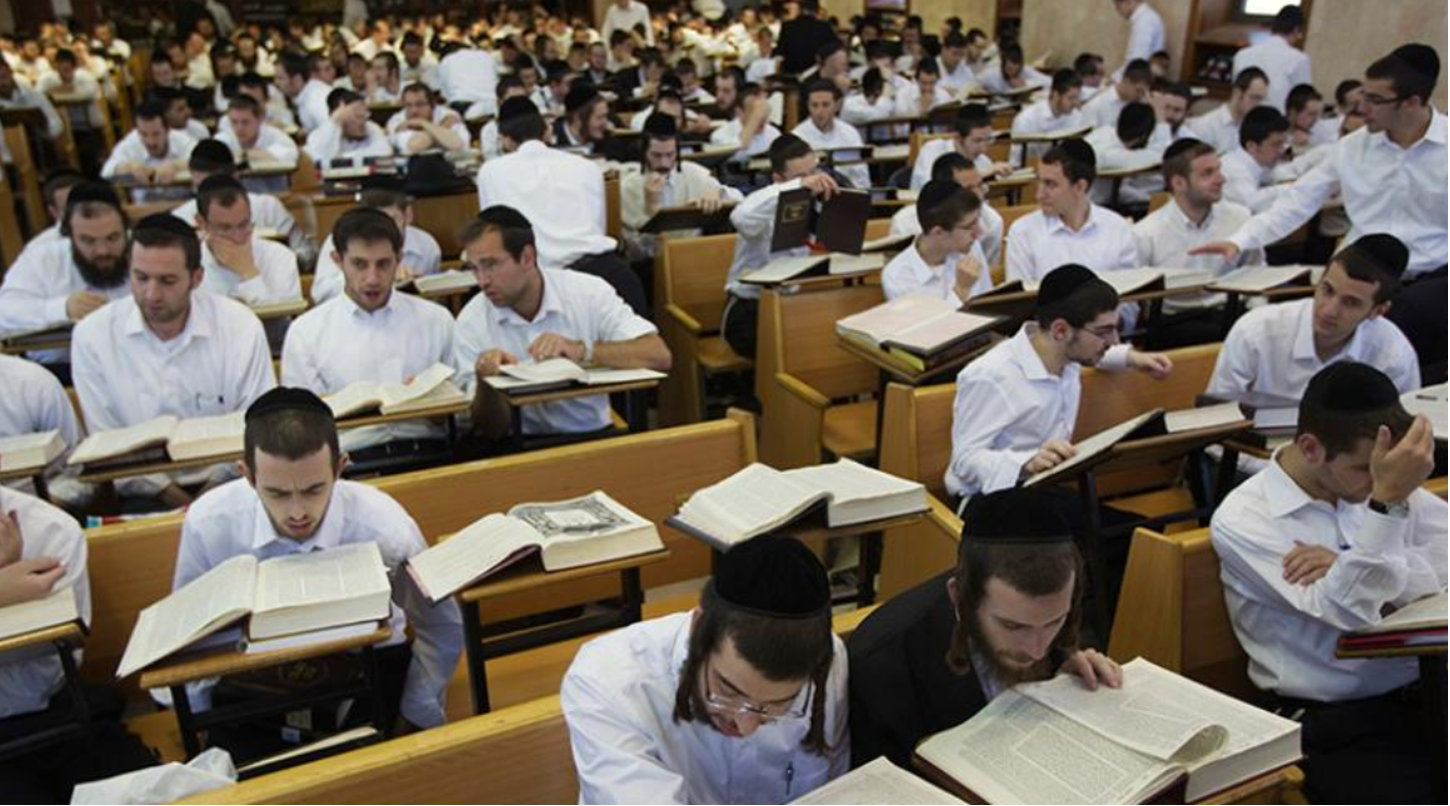 Born to American Jewish immigrants in Haifa in 1972, Bennett grew up in a family that transitioned from showing little interest in observing religion to becoming kosher keepers and regular synagogue-goers. At 18, Bennett was drafted into the Israel Defense Forces and later became a commando officer serving as a reservist.

Before entering politics, Bennett made millions as an entrepreneur who steered several tech companies to success. But while the businessman-turned-politician prides himself on both his experience in leading military units and managing large corporations, his time in the military was not always smooth.

Caught in controversy was one of his actions as commando. During Operation Grapes of Wrath, an Israeli military campaign against Lebanon in 1996, he led a unit deep into Lebanese territory and came under heavy fire from Hezbollah. He then called in an artillery strike to assist his unit, and that same strike accidentally killed at least 100 civilians.

From shadowing Netanyahu to taking over the top job

Working as Netanyahu's chief of staff was Bennett's first job in politics. At the time, Netanyahu was the opposition leader and on track to take back the PM's office. But Bennett did not stay in the job long enough to reap many rewards. The former businessman clashed with basically everyone around Netanyahu, including his boss's wife.

This did not mark the end of partnership, however. Ahead was a long-running working relationship in which Bennett continued his role as Netanyahu's loyal servant in a variety of roles.

Bennett eventually found his way into the Knesset by taking over a struggling religious party – The Jewish Home. Despite successfully turning the party's fortunes around, his attempts to inject new elements into it backfired. He then founded his own party with Ayelet Shaked, a longtime partner. 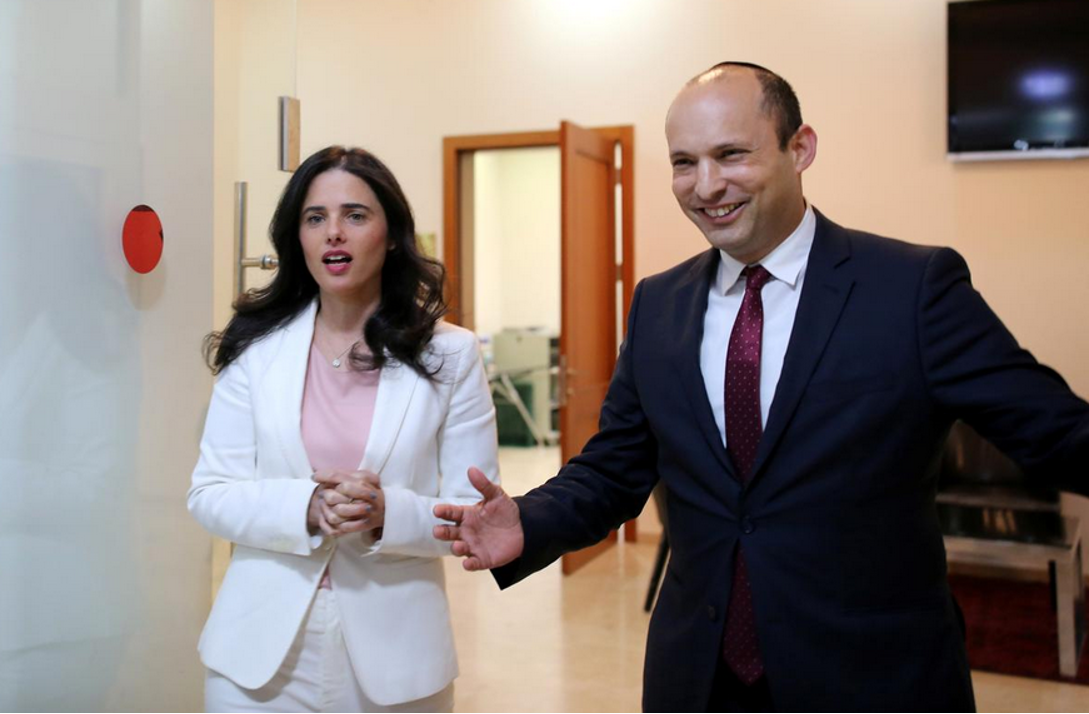 The party, which was named the New Right and later became a key part of Yamina, was built around the idea of bridging the gap between the more religious sector of the Israeli electorate and the country's secular community. But since right-leaning secular Israelis have Likud to vote for, and religious Zionists often prefer more radical parties, little space was left for the New Right to stand out.

In the three elections prior to the poll held in March, the New Right won no more than three seats.

Nevertheless, his time with both The Jewish Home and the New Right saw Bennett enter the cabinet, as Netanyahu needed the parties' support to form successive coalition governments. He served as economy minister and education minister as well as in lower-level government jobs.

During that time, Netanyahu's appreciation of Bennett's role in government fluctuated with his party's electoral performance. But besides occasionally criticizing his former boss, Bennett has been reluctant to stray too far from the former prime minister. The man replacing Netanyahu seems to have always looked up to him, even though Netanyahu has unrelentingly attacked Bennett when doing so served his own interests. 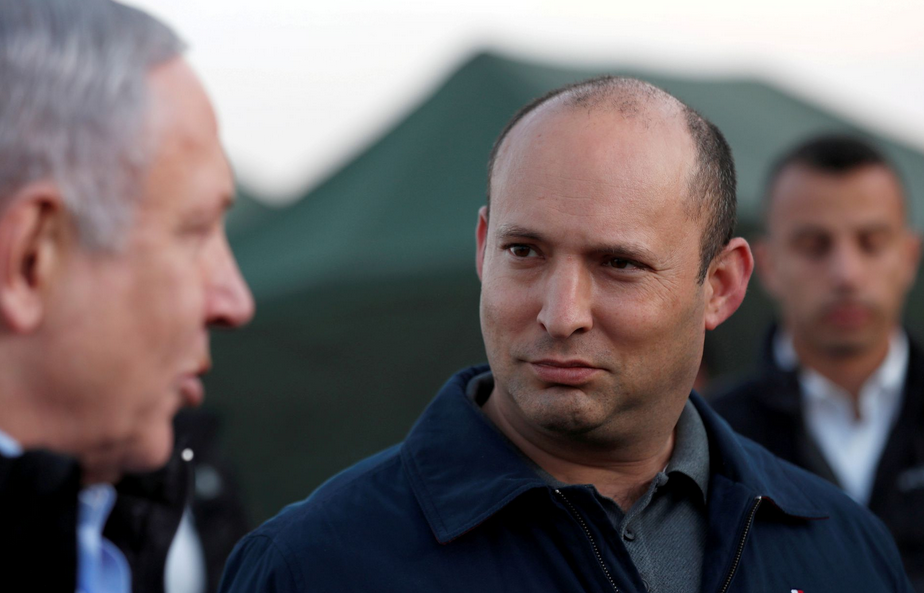 Then Israeli Defense Minister Naftali Bennett looks at Prime Minister Benjamin Netanyahu during a visit to an Israeli army base in the Israeli-occupied Golan Heights, November 24, 2019. /Reuters

Then Israeli Defense Minister Naftali Bennett looks at Prime Minister Benjamin Netanyahu during a visit to an Israeli army base in the Israeli-occupied Golan Heights, November 24, 2019. /Reuters

Bennett has tried to differentiate himself from the former prime minister. In the effort to steal right-leaning voters from Netanyahu's right-wing Likud, he would at times make statements more radical than Netanyahu, using such inflammatory rhetoric as calling Arab parties "terrorists" and claiming killing Arabs is not a problem.

It seems, however, Bennett knows perfectly that his message can only appeal to a limited electoral base – he is considered neither too radical nor moderate – and those close to him believe he is more than likely to replicate Netanyahu's political platform once the latter is gone. 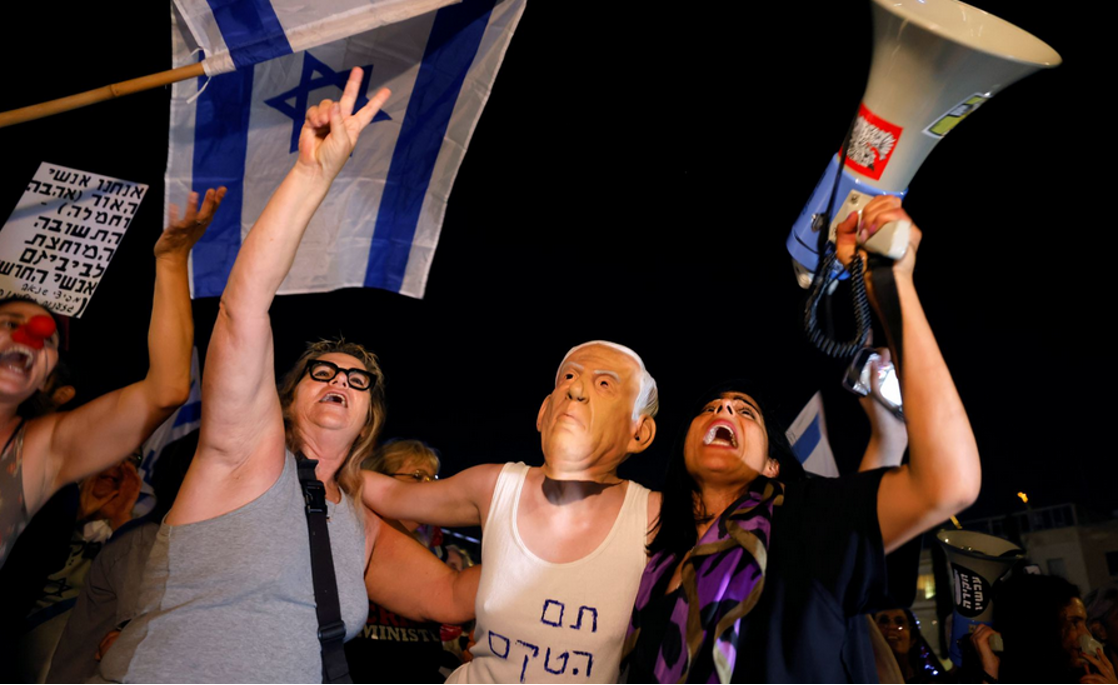 People shout slogans during a rally in support of a so-called government of "change," a day after far-right party leader Naftali Bennett threw his crucial support behind a "unity government" in Israel to unseat Prime Minister Benjamin Netanyahu in Tel Aviv, Israel, May 31, 2021. /Reuters

People shout slogans during a rally in support of a so-called government of "change," a day after far-right party leader Naftali Bennett threw his crucial support behind a "unity government" in Israel to unseat Prime Minister Benjamin Netanyahu in Tel Aviv, Israel, May 31, 2021. /Reuters

On Sunday, when Bennett was addressing the Knesset, he said the new government "will open a new page in the relations between the State of Israel and the country's Arab citizens. ... We understand the plight and needs of the Arab society. The fight against crime and violence, the housing crisis, the gaps in education and infrastructure will be addressed."

To those who know Bennett well, he has carefully calibrated his persona to maximize his chances of becoming Israel's most powerful man, or more precisely, the heir to Netanyahu.

The deft politician seems to know precisely what sort of a role to play when placed in different positions.

"He certainly has been very hawkish in the past," George Birnbaum, a U.S. political consultant and strategist who worked for Bennett's campaign ahead of Israel's election in March, told MSNBC. "But I've seen him evolve as a leader, as a politician, as a man, and I think the weight of leading a country like Israel is on his shoulders, he's feeling it, and I think he's going to be very responsible."

While the election in March presented Bennett with the opportunity to unseat Netanyahu, he did not seize it until the very last minute. During the painstaking, months-long process of coalition talks, the far-right politician came under tremendous pressure for considering the possibility.

His decision to finally come onboard has led to fierce protests from Netanyahu loyalists, far-right religious leaders and even members of his own party. "I told my kids their father will become the most hated person in Israel," Bennett told Israeli broadcaster Channel 12.

But what he may not have fully grasped, or perhaps what's clouded by the fury he faced from the Israeli right, is that he has ended an era that belonged exclusively to the once unbeatable titan – and now he may be heading down a similar path to prominence.