Download
Dragon Boat Festival: What traditional foods are there besides 'zongzi'?
Cui Xingyu 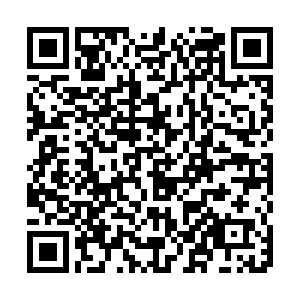 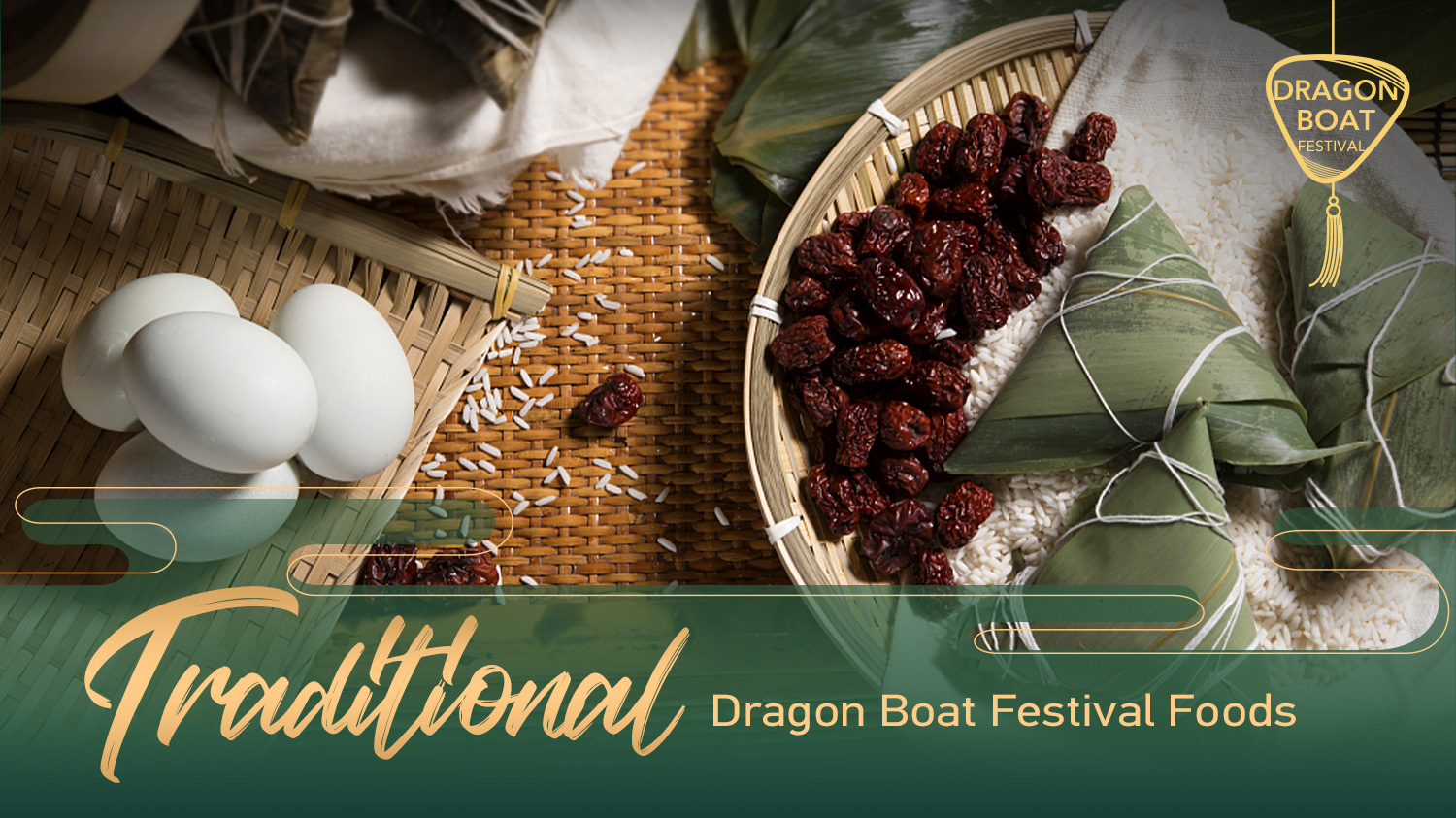 The Dragon Boat Festival, also known as Duanwu Festival, is among the most celebrated Chinese traditional occasions and falls on the fifth day of the fifth Chinese lunar month – this year on June 14. For those who are no strangers to Chinese culture, the festival correlates the pyramid-shaped glutinous rice dumplings known as zongzi that are often placed at the center of the dining table.

However, it is not the only festive snack in China. In fact, different regions across the country have quite distinctive dishes for celebrations. Let's take a look at some of the representative foods and drinks. 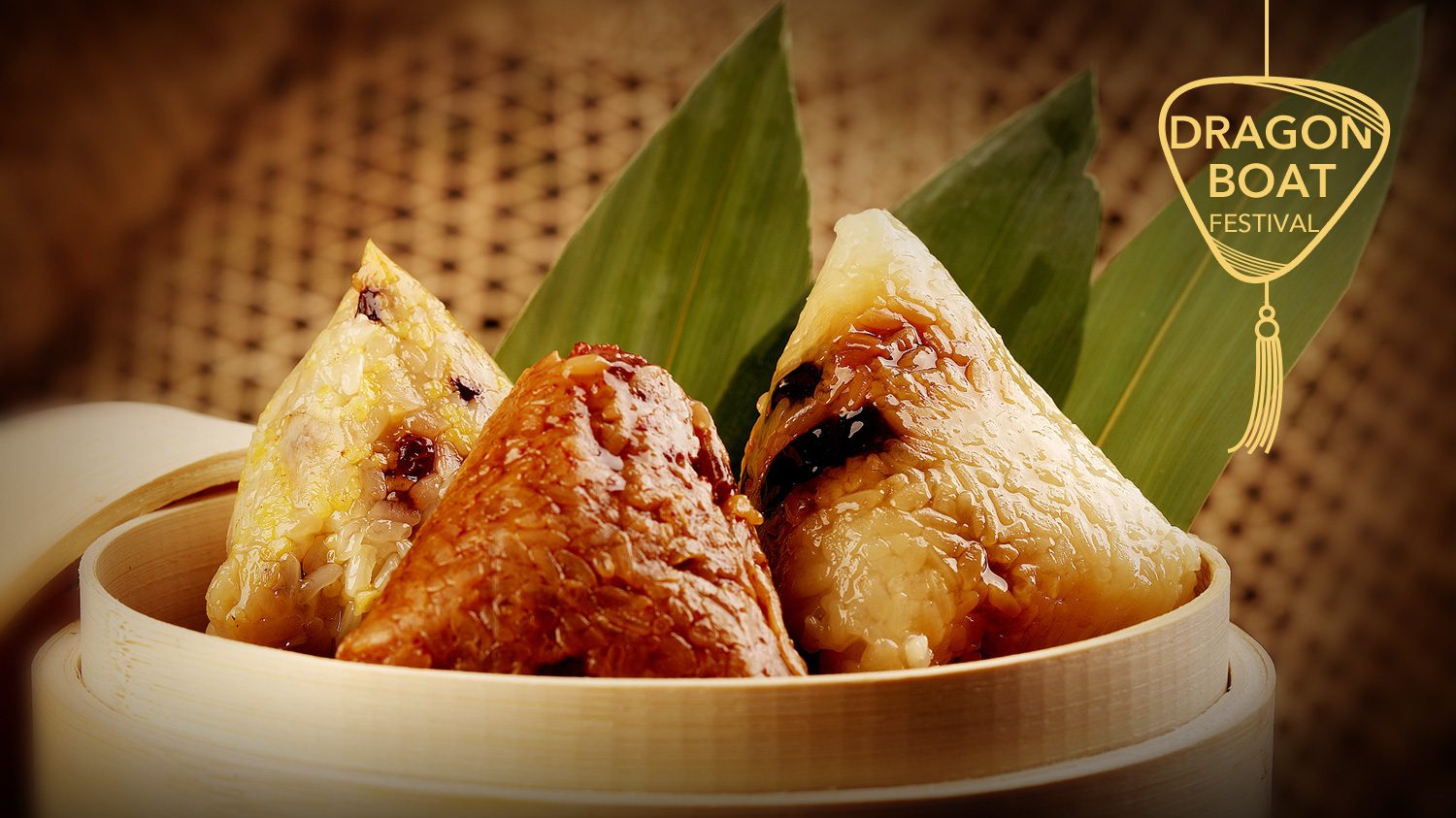 Generally, there's a major difference of the sticky rice dumplings between northern and southern China in terms of flavor. Zongzi from northern China are sweet as they are typically stuffed with red bean paste or Chinese dates, whereas those in the south are savory with fillings of salted egg yolk and pork.

But more specifically, the culture of zongzi varies in different cities, even in towns and counties, across the country. It carries strong regional characteristics from the selection of sticky rice, to the ingredients of the fillings and even the wrapping leaves.

In recent years, Chinese people have been experimenting with new stuffing to give new life to the traditional snack. The variations include those stuffed with chestnut and pork, spicy crayfish, Kung Pao Chicken and even luosifen – a rice noodle dish known for its pungent smell from south China's Guangxi Zhuang Autonomous Region. 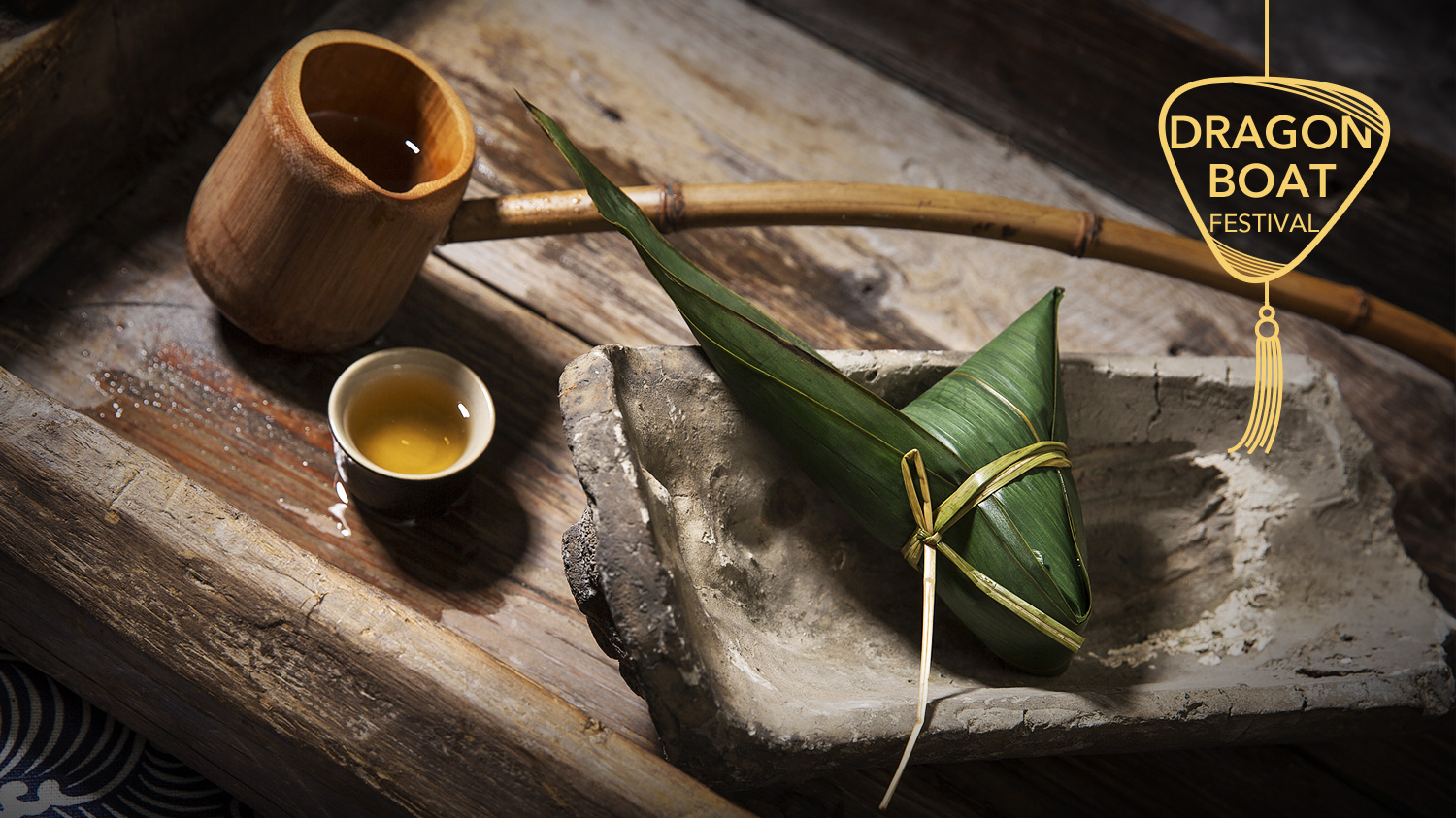 Xionghuang wine, or realgar wine, is a type of Chinese liquor made with powdered traditional Chinese medicine – realgar. It's said that people living in areas near the Yangtze River used to drink xionghuang wine on the Dragon Boat Festival to ward off evil spirits in ancient China. Parents would also apply drops of xionghuang wine on children's forehead, hands, ear and nose to prevent mosquito bites in summer.

Nowadays, as realgar is toxic, people opt for huangjiu (yellow wine), a popular Chinese alcoholic beverage made from cereal grains, instead. 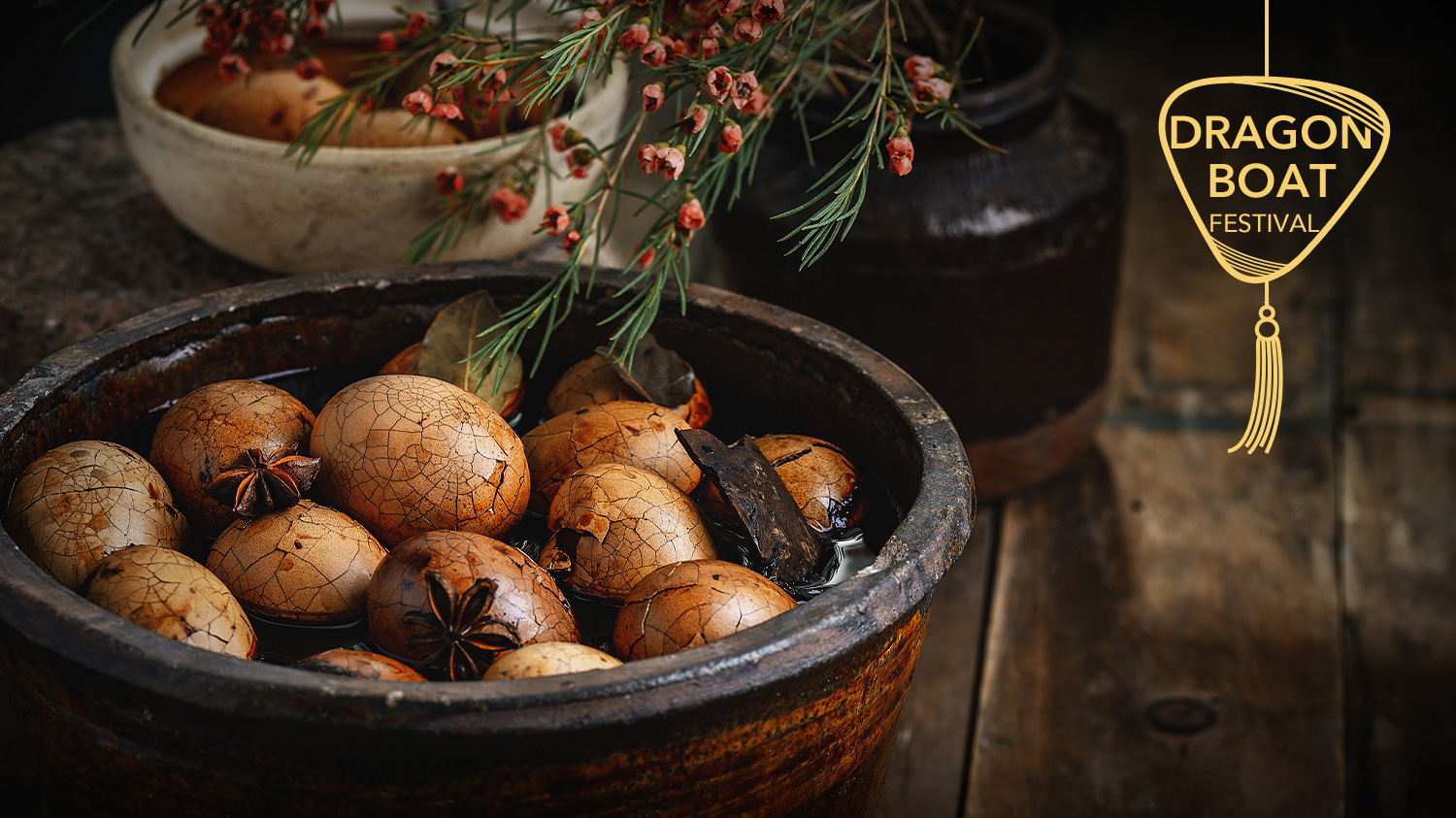 For those living in Nanchang in eastern Jiangxi Province, having some tea eggs on the Dragon Boat Festival bears some auspicious meanings.

Boiled eggs, be it chicken eggs, duck eggs, or goose eggs, are slightly cracked and then boiled again in tea with sauce or spices for the flavor to sink in. Some would also paint the eggshells in red, put them in net bags and hang around children's neck, hoping to bring good luck and keep them safe.

Today, tea eggs have become quite a popular snack for Chinese. They are commonly seen being sold at street vendors or night markets. 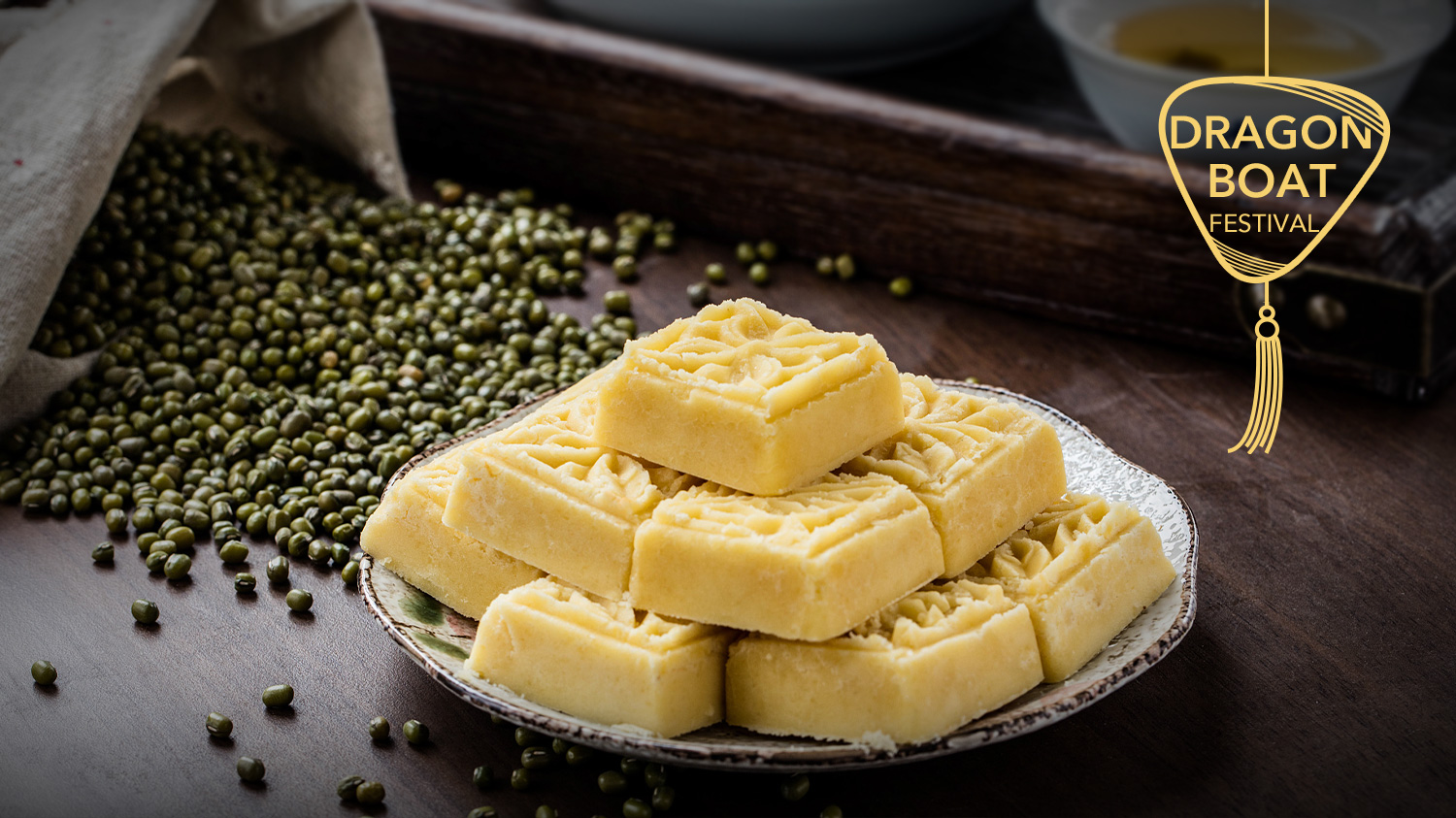 The Dragon Boat Festival usually indicates that the dog days of summer are not far away, and something cool and refreshing is desperately needed. In eastern Zhejiang Province, fluffy mung bean cakes are one of the locals' favorites.

Mung beans can help with reducing body heat and quenching the thirst, according to traditional Chinese medicine. That's why it has become a popular ingredient for making summer treats.

Saozi noodles: A specialty in Shaanxi 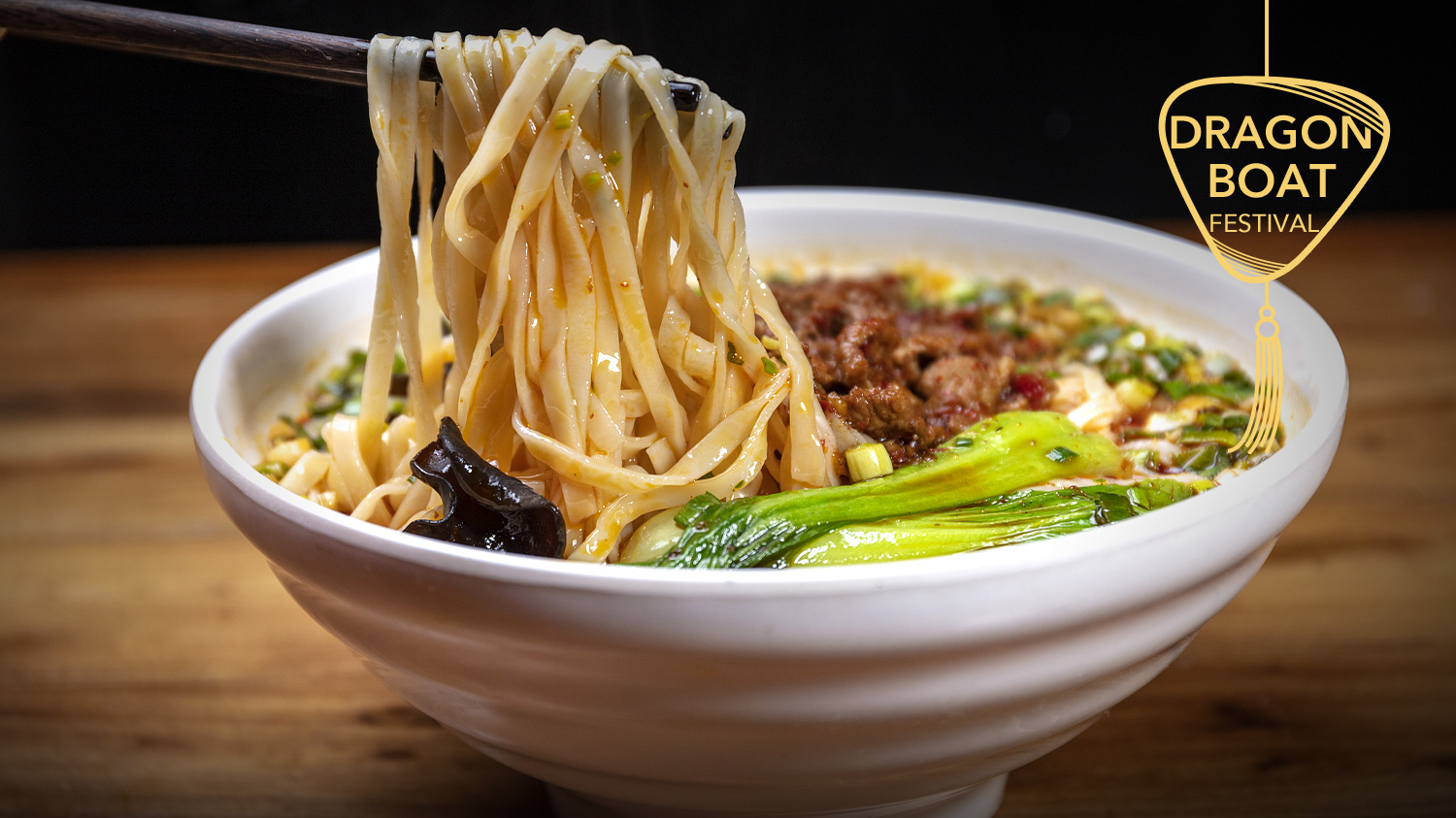 People from northwestern Shaanxi Province always have an appetite for noodles. For them, the Dragon Boat Festival is incomplete without a bowl of saozi noodles. The county of Qishan, in particular, is the most famous place for the dish.

The thick and broad noodles are served with pork broth as well as a variety of ingredients, including tofu, carrots, wood ear and garlic sprouts, for a colorful composition.