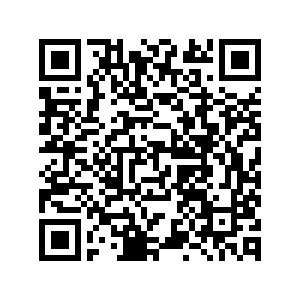 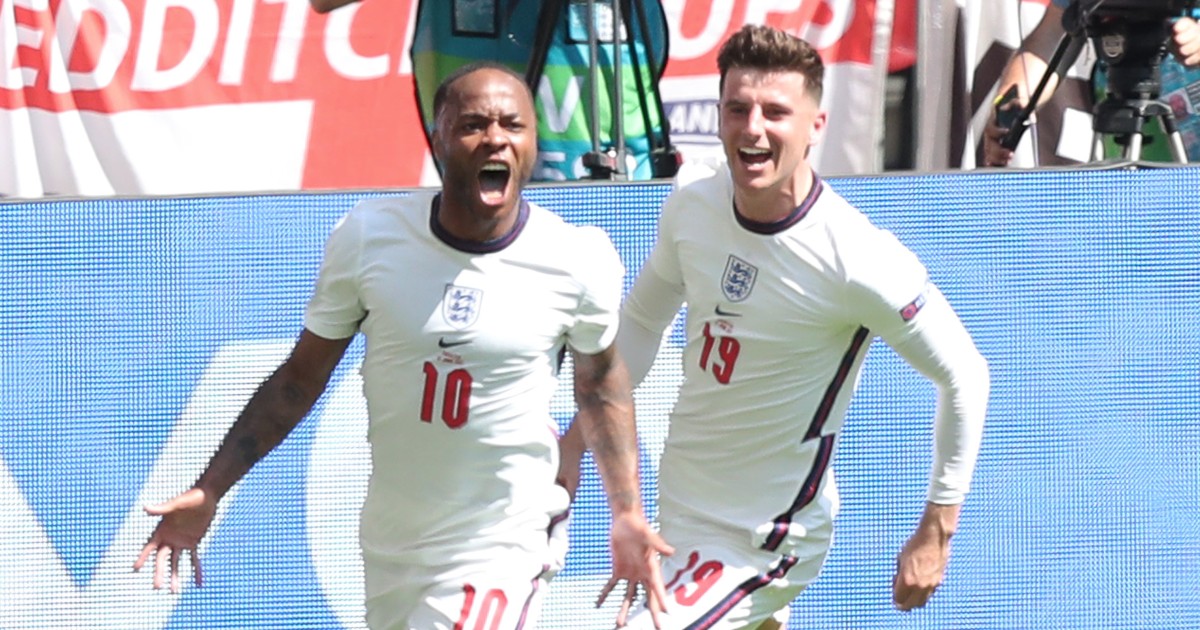 Three years on from the Russia 2018 semifinal comes a rematch that not even Floyd Mayweather could have booked better. Since that previous clash where England where handily dismantled, Croatia have lost their main goalscoring threats (Mario Mandzukic, mainly) and everyone else has aged far beyond their prime.

That meant Croatia were crafty and solid but always a step too slow and a touch too clumsy to make anything happen. On the rare chance they did, they didn’t have anybody agile enough in the box to negotiate England’s back four. In the last tournament, a forward selection including Ivan Perisic, Mateo Kovacic and Luka Modric would be lethal, now it’s stale and barely functional.

That being said, after a snappy opening period in which Phil Foden hit the post, it seemed the combination of a hot London day and the effects of the long, compressed season took effect and England became as slow and stodgy as their aged opponents.

Raheem Sterling, a controversial selection by manager Gareth Southgate as he had failed to score in 12 previous England appearances, broke the deadlock with a scrappy strike up the middle after being played in by Kalvin Phillips.

That didn’t stop him from being his usual wasteful self before and after the goal. The 1-0 margin was far too slight, even against a toothless opponent like Croatia, suggesting England will be rejigged for their next game. 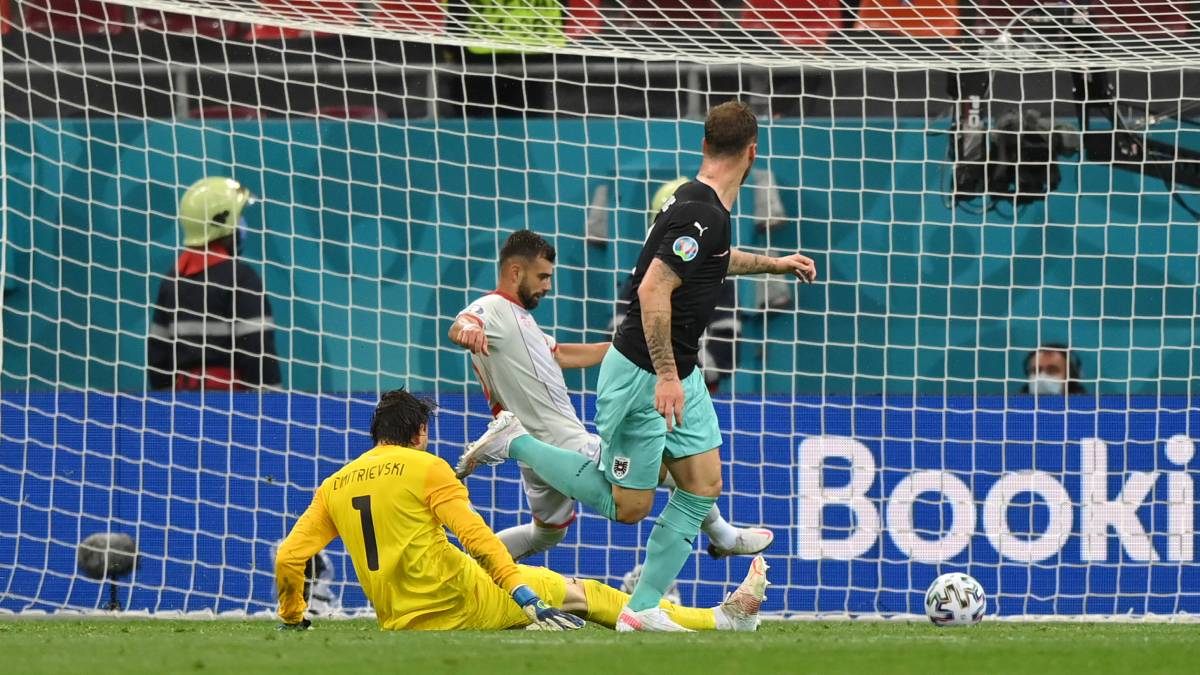 Marko Arnautovic scores to make it a 3-1 win for Austria over North Macedonia. /Getty

Marko Arnautovic scores to make it a 3-1 win for Austria over North Macedonia. /Getty

In comparison to the aforementioned Croatia, Austria are a team that has grown a lot in the past few years, going from David Alaba and friends to a side of Bundesliga all-stars – and they put in a performance that firmly puts them in the dark horse conversation.

It took 18 minutes for Franco Foda’s side to make an impact with Marcel Sabitzer floating a pass to a sprinting Stefan Lainer who volleyed it in form close range, causing commentators worldwide to reference the legendary Marco van Basten.

The game’s real highlight came 10 minutes later, however, when a scramble and a dropped ball up at the Austrian end allowed North Macedonia to strike and 37-year-old national hero Goran Pandev scored to make it 1-1.

Alaba was part of that mistake and it came about from him sticking to his left back position. In the second half, he became much more free floating as per his late-Bayern Munich style and set up Austria's second which was scored by Michael Gregoritsch practically out of goalkeeper Stole Dimitrievski’s hands.

It was then put to bed in the 89th minute by Marko Arnautovic. Egzon Bejtulai tried to clear a short corner and instead shanked it towards his goal; Arnautovic seized it, rounded the keeper and made it 3-1.

It had been 31 years since they last won at an international tournament. This victory will be one to savor. 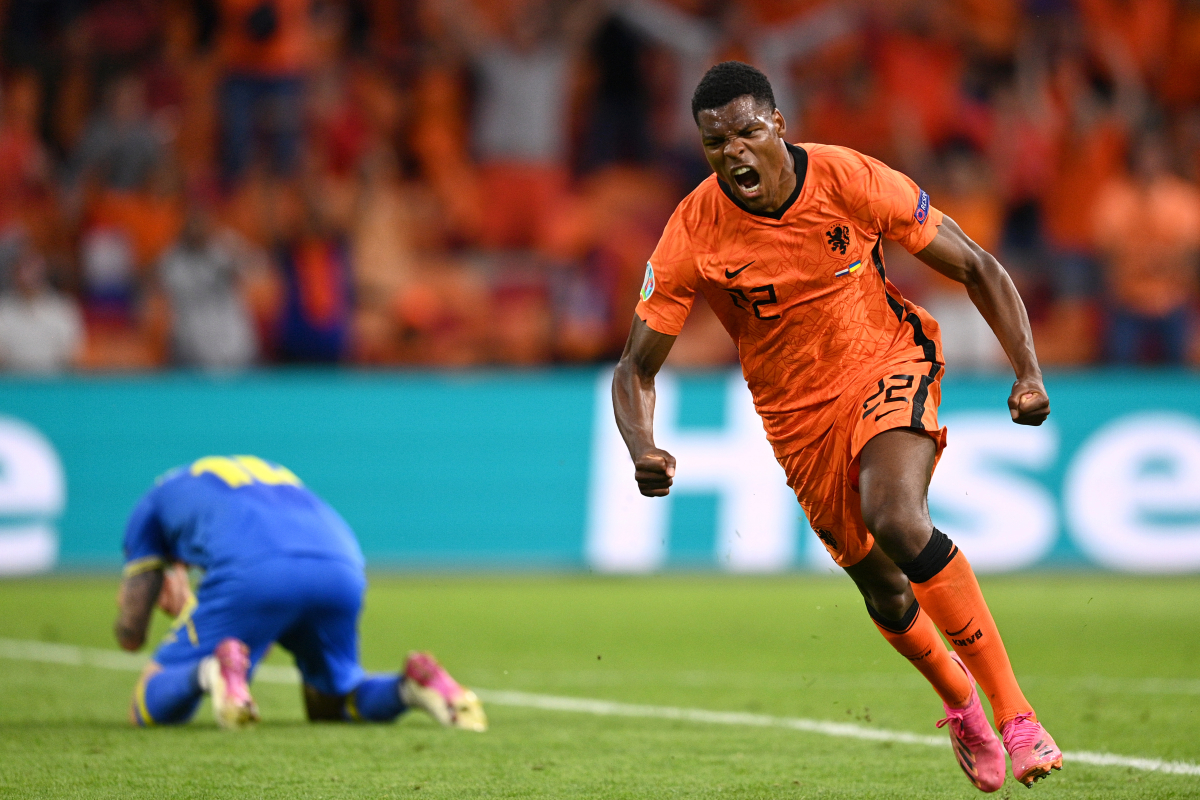 Denzel Dumfries celebrates after scoring the winning goal for the Netherlands against Ukraine. /Getty

Denzel Dumfries celebrates after scoring the winning goal for the Netherlands against Ukraine. /Getty

There’s a lot of controversy behind Netherlands manager Frank de Boer changing from the national side’s classic 4-3-3 formation to a 3-5-2 but, for the neutral, and in this opening game at least, it was perfect.

When contrasted with the 4-3-3 of Ukraine, who were playing midfielders Ruslan Malinovskyi and Oleksandr Zinchenko in the half-space behind their attacking front three, it basically removed the center of the pitch from the game and created an exciting game that was played fast up and down the wings.

It was end-to-end for the entire first half. The Netherlands had the lion’s share of the shots on goal but couldn’t make it 1-0 until seven minutes into the second half. A cross was fed in to Memphis Depay; once again Ukraine keeper Georgiy Bushchan saved it, only this time knocked it into the path of Georginio Wijnaldum.

Wout Weghorst made it 2-0 barely five minutes later. It seemed out of sight for Ukraine until a shock one-two combination of goals in the 75th and 79th minutes by Andriy Yarmolenko (with the goal of the tournament for far) and Roman Yaremchuk respectively had the Netherlands on the ropes. Their defense in the final third was absolutely abysmal and Ukraine exploited it quite easily.

The men in orange held it together and eventually won 3-2 thanks to Denzel Dumfries. The Netherlands will be pleased with three points from this international football comeback – they will only wish they weren’t so badly exposed by Ukraine in the process.